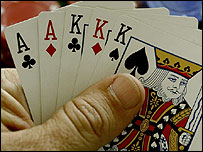 So back in 1997 a major milestone in computing history seen IBM’s Deep Blue computer beat the world’s best chess player Garry Kasparov. This time round the same deal, different game. It was thought that computer AI had evolved enough to beat the worlds best at poker. Not so, no yet at least.

One things for sure, it’s simply a matter of time before computing AI becomes advanced to win almost any game against a human. there’s obviously a large number of possibilities when it comes to these types of games, and number calculations is exactly what computers excel at.

Jason Cartwrighthttp://techau.com.au/author/jason/
Creator of techAU, Jason has spent the dozen+ years covering technology in Australia and around the world. Bringing a background in multimedia and passion for technology to the job, Cartwright delivers detailed product reviews, event coverage and industry news on a daily basis. Disclaimer: Tesla Shareholder from 20/01/2021
Previous articleflotzam – Twitter, flickr, facebook mashup in WPF.
Next articleMicrosoft Visual Studio 2008 beta 2 released !