If your a PC user and have fallen in love with the performance available there, then you’ve probably considered if there’s a laptop out there that’d give you similar performance, but add the mobility you wish you had. Whether it’s moving to the couch,taking it to a friends place, or a LAN party, being mobile and having your games and enough peformance to run them is the ultimate dream.

With the latest generation of Dell’s G7 gaming laptops, they now include 8th gen Intel CPUs, but the real headline feature is the work from Nvidia to shove one of their RTX video cards into a laptop chasis. This combination of CPU/GPU, combined with 16GB RAM, means you’ll be able to achieve that mobility dream.

Our review unit was the 17″ version, however, the new Dell G7’s are also available in a 15″ version, personal preferences in terms of size and weight are certainly determining factors.

I’ve been used to ultrabooks and their thin and light form factors, so using a massive gaming laptop is a big shift. The 17″ Dell G7 gaming laptop is 25mm high, by comparison, Dell’s own XPS13 is just 7.8mm at its thinnest. Apples Macbook is just 3.5mm – 13.1mm in height, so the Dell G7 feels enormous, being double the height, but it’s perhaps the scale of a 17″ when you’re used to a 13″ laptop that is the biggest shift to get your head around.

The body of the G7 is black and features subtle branding, with just Dell and G7 mirrored logos. The laptop skips on all the normal crazy colours found in many gaming devices which means if you have to convince the boss that you need the performance inside for real work, you could probably pull that off. The performance inside creates a fair bit of heat, so to deal with that, Dell has put vents in the side, rear and underneath the body. These vents are actually really well integrated into the overall design, with horizontal lines running the perimeter of the device, only interrupted to make way for a healthy number of ports.

When you open the display, you’ll notice the full-sized keyboard, along with the generous amount of palm space. The screen itself is surrounded by a fairly narrow bezel, except for the bottom bezel which is ridiculously huge. It’s hard to understand that this device came from the same company that produced the gorgeous XPS13.

In terms of interfacing with the design, I enjoyed the RGB backlit keyboard, complete with the numberpad, something often missing from the regular 13/14″ devices. The multitouch trackpad is large and is super responsive, and your finger slides over it easily. One of my favourite features is the power button that also serves as a Windows Hello compatible fingerprint reader. This decision gives you one location to perform both functions and works everytime.

What can it do and how does it perform ?

The key differentiator between this gaming laptop and most others on the market is the GPU, that’s a NVIDIA GeForce RTX 2060 6GB GDDR6. What really blew me away is just how capable this laptop is. I play a lot of driving games and with the visual settings set to maximum, I never had an issue and that’s playing on my Samsung QLED super ultrawide, pushing 3840×1080 or connected to my 4K TV.

This level of performance had previously only been available to with desktop-class GPUs, namely the GTX1080 and above. To have the kinds of experiences I did, I had to remind myself this was all being powered by a mobile, one that I can disconnect and move to another room with ease.

When it comes to raw numbers, I ran PC Mark 10 on the G7 and it stacked up, exceptionally well. With an overall score of 5119, it’s well above the 4G gaming PC level of 5005 and well above the minimum spec for VR computing with the Rift or Vive which is 4481. By way of comparison, I’ve listed some of the other devices we’ve reviewed.

The screen on the Dell G7 is a 17.3″ FullHD or 1920 x 1080 resolution running at 144hz. It’s also an IPS display making viewing angles great, but let’s be honest, most of the time you’re right in front of it. The final attribute is brightness, it features 300-nits which means on its brightest, it’s really bright. If you find yourself outside in the sun or have a particularly glary office, then this will matter to you.

The display isn’t a touchscreen which is something I particularly look for from laptops, something that’s almost a checkbox feature these days that doesn’t really add much to the cost. The lack of a touchscreen her may not be a concern to all users, but as someone who has grown to expect it, its absence is really felt. This removes the option to touch dialogue boxes, pinch and zoom or even just simple scrolling through websites or photos.

With the power button also doubling as a fingerprint reader, this laptop features Windows Hello compatibility. This makes authenticating to Windows easier than ever. While there’s no facial recognition available here, the fingerprint serves as a great option when you’re on and off your machine multiple times during a session. The fingerprint reader is fast and accurate and generally a great inclusion on the device.

Inside the body also lies a dual-hard drive setup. To keep booting and your applications super fast, there’s a 256GB M.2 PCIe NVMe Solid State Drive and to ensure you have enough space for all your Steam games, and/or data, there’s an additional 1TB 5400 rpm 2.5″ SATA Hard Drive.

One of the best parts of buying a new laptop is the ability to leverage the newest connectivity methods. The G7 features 1x Thunderbolt 3 port, a USB 3.1 Gen 2 Type-C port which is capable of 40Gbps transfer speeds, or a DisplayPort v1.2 output enabling one 5K or two 4K displays.

The front-facing webcam is a widescreen HD (720p) camera with a dual array microphone. While this isn’t the best quality camera, it’ll safely get the job done for simple skype calls. 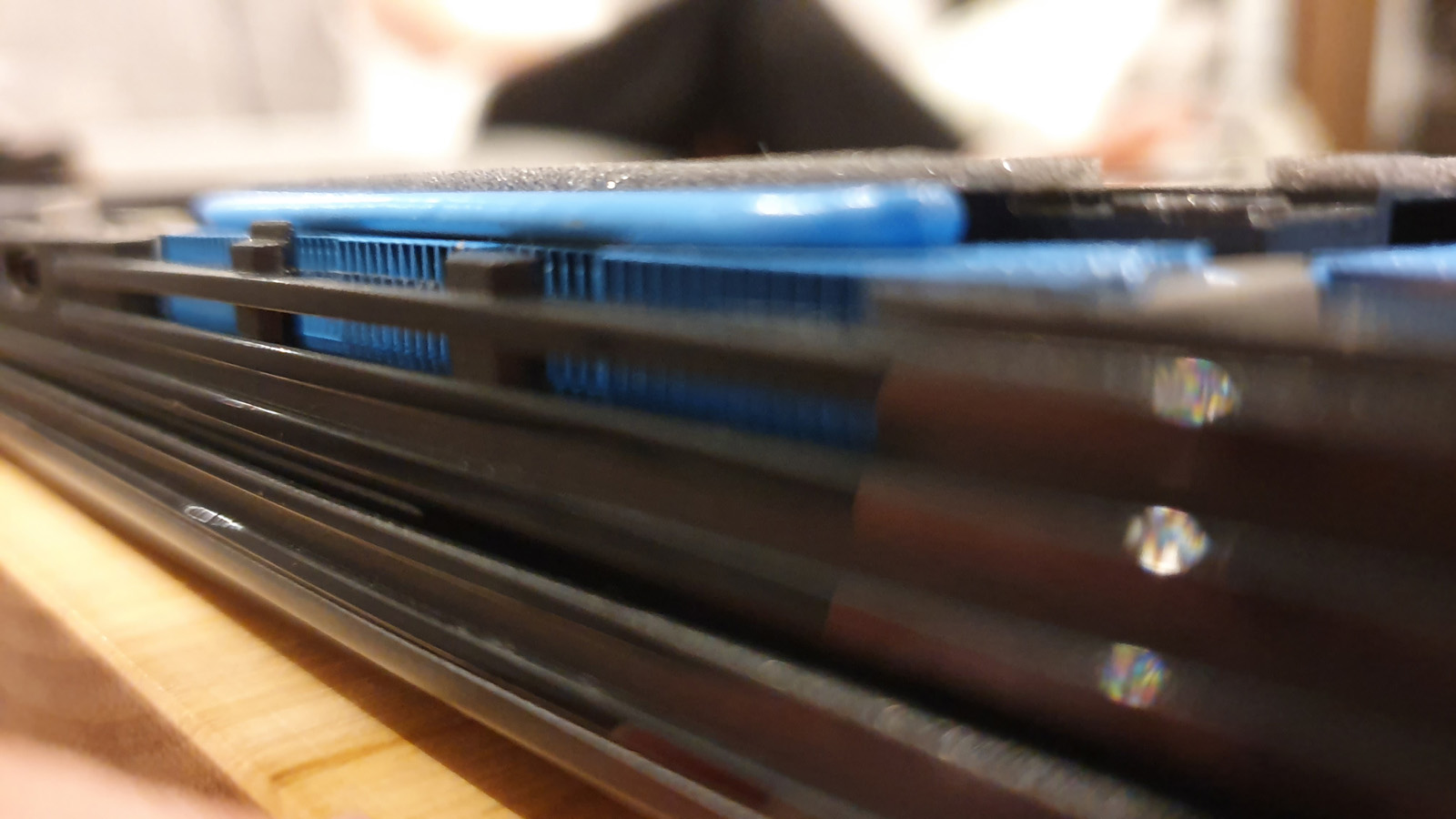 One of the more frustrating parts of the Dell G7 is the crapware that its still loaded with out of the box. When you open up the laptop and sign in for the first time, your start menu has been vomited on by an array of games and apps you didn’t ask for, don’t want and will never play. Your first job is to go through and uninstall each of these, which ultimately makes for a bad out of the box experience.

Easily my biggest gripe with the G7 17″ is the 1080p display. For a computer that’s targeted at gamers, that rocks a stunning GeForce RTX 2060 which supports 4K graphics, to include a screen that only outputs 1920 x 1080 is such a waste. I mean I get it, Dell went with a fast refreshing 144hz display, but if I’m going to justify the weight and size of this, the display should also look amazing. At 17.3″ you really are stretching the issue with pixel density, with many smaller displays in the 13-14″ range, far exceeding the G7.

The model we reviewed is the Dell G7 17 which costs A$3,299.00. That’s a lot to spend on a laptop, but the top-end performance available here is something you’re always going to pay up for. The mobility piece also attracts a premium over a traditional PC build, namely because you have a display and battery to account for.

As good as the performance is on the G7, its not the laptop for me. I have no doubt there are people out there who’ll want the power of the RTX2060 in a mobile package, but the size and weight penalties you pay for a 17″ display are not justified, especially when that display is only 1080p.

The 15″ model is likely a more manageable beast, and would actually fit in some backpacks. This laptop feels like it’d be great for those that need to game at home, then take it over to a friends place for a LAN gaming session and that means you can avoid carting your monitors, keyboard, etc with you, just take 1 device, your laptop (and maybe a mouse).

Because of the physicality of the device, I feel like I’d still want a small and light ultrabook to take with me to work at a cafe or McDonalds. Something that’s definitely off the table is any thought of using this laptop in a plane. This would consume your table tray and half of the one next to you, it really is a behemoth.

If you can look past the size, then the RGB backlit keyboard is a fun touch, while the external design is subtle enough to take to meetings and still look professional, try and do that with an Alienware.

When it comes to value for money, the performance on offer here, for the price that’s charging is a great value, I just can’t get my head (or eyes) past that screen. While it can power a 4K display, the reason you would consider buying a laptop like this is because you are away from your primary setup on a semi-regular basis.

Jason Cartwrighthttp://techau.com.au/author/jason/
Creator of techAU, Jason has spent the dozen+ years covering technology in Australia and around the world. Bringing a background in multimedia and passion for technology to the job, Cartwright delivers detailed product reviews, event coverage and industry news on a daily basis. Disclaimer: Tesla Shareholder from 20/01/2021
Previous articleCommonwealth Bank trials smart-money on blockchain
Next articleNDIS will cover solar and batteries for disabled