It’s that time of the year where we get the annual update to GoPro. In this year’s update, GoPro Hero 10 has the same form factor, which is great, as all your accessories will continue to work, but the real change has happened inside the body.

Since 2017, GoPro’s have been running on the same GP1 processor, but this year, in the 10th generation, GoPro has added a more powerful, more capable GP2 processor. This helps to dramatically improve the performance of the rear touchscreen, allow for a higher refresh rate on the front screen, but also process a new benchmark in video and image quality for GoPro.

Hypersmooth 4.0 technology has also been introduced for this generation and offers further improvements in stabilising your action footage. In scenarios that would otherwise create unwatchable footage, Hypersmooth does a great job at removing the bouncing as you walk or run. It is also fantastic at smoothing out bumps generated by skating, riding or driving over bumps in the pavement or roads, making the resulting footage appear as if it was shot with a Steadicam.

After you’re done capturing our amazing world, you’ll be able to transfer footage 30% faster over WiFi which we’re told is also a benefit of the improved processor, not particular changes to the WiFi stack. For those who want even faster offloads, wired transfers are also sped up by 50% and after using the camera for a couple of weeks, I can certainly confirm these speed improvements are real. Being able to speed up the capture to edit workflow, helps decrease the time between capturing and publishing. Knowing this process wouldn’t be so painful, I certainly found myself using the GoPro Hero 10 more often than other cameras.

The GoPro Hero 10, as expected, is a very familiar, well-executed compact package, capable of capturing an amazing level of visual fidelity and now it’s time for a detailed breakdown to see if you should upgrade or invest in your first GoPro. 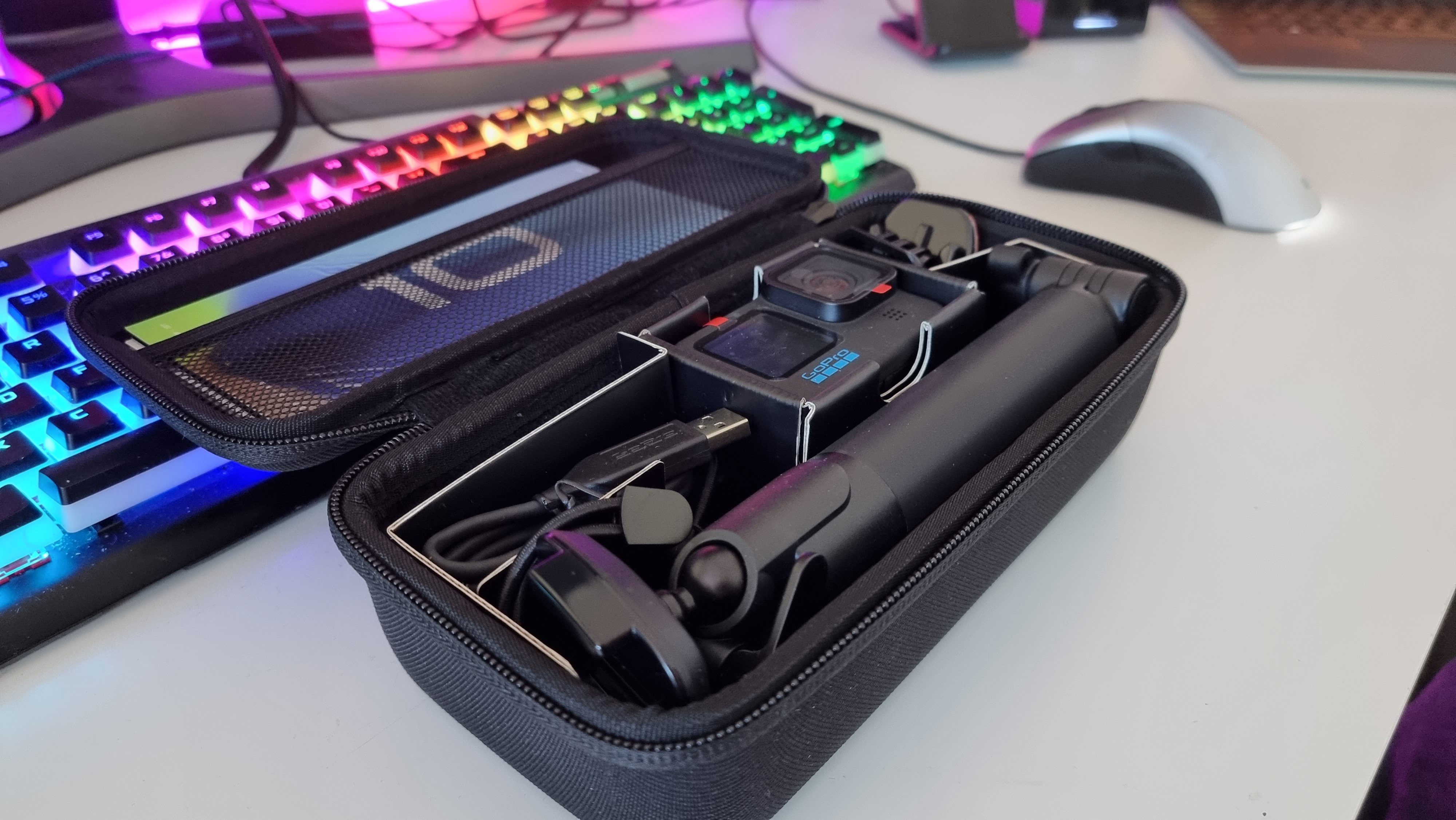 GoPro Hero 10 retains the same physical size as last year’s model and for those that accessorised last year, then you’ll be glad it all still works. This compact design is really a winning formula, so there’s really no reason for GoPro to mess with it.

One change is to the branding, to GoPro Hero logos on the front and side of the body are now a proud blue, rather than the subtle grey from Hero 9 and years gone by. This may annoy some who were looking to hide the GoPro away in shots, as the blue may draw attention from the eye, but generally, it’s not a problem. If anything it’s an opportunity to show off that you have the latest model, in the same way, Apple iterates their phones just enough to let everyone know you did or didn’t upgrade.

The front and rear displays retain the same dimensions, the lens is again removable (replaceable with Max Lens Mod). New this year is the lens cover, which is Hydrophobic, water-shedding glass, also more scratch-resistant, although I’d still be careful with it and not just throw it in a bag with keys.

The battery, micro-SD and USB-C ports, are all the same. Basically, if you’ve ever used a GoPro, it’ll feel familiar, in a good way that lets you focus on capturing great shots, rather than worrying about how to use the hardware.

While not new, I really do enjoy the fold-out mount built into the bottom of the camera body, although would also love a built-in tripod mount. One of GoPro’s biggest strengths is that GoPro mount, for which there are a stunning number of accessories. There is basically a camera mount for every application you can think of. 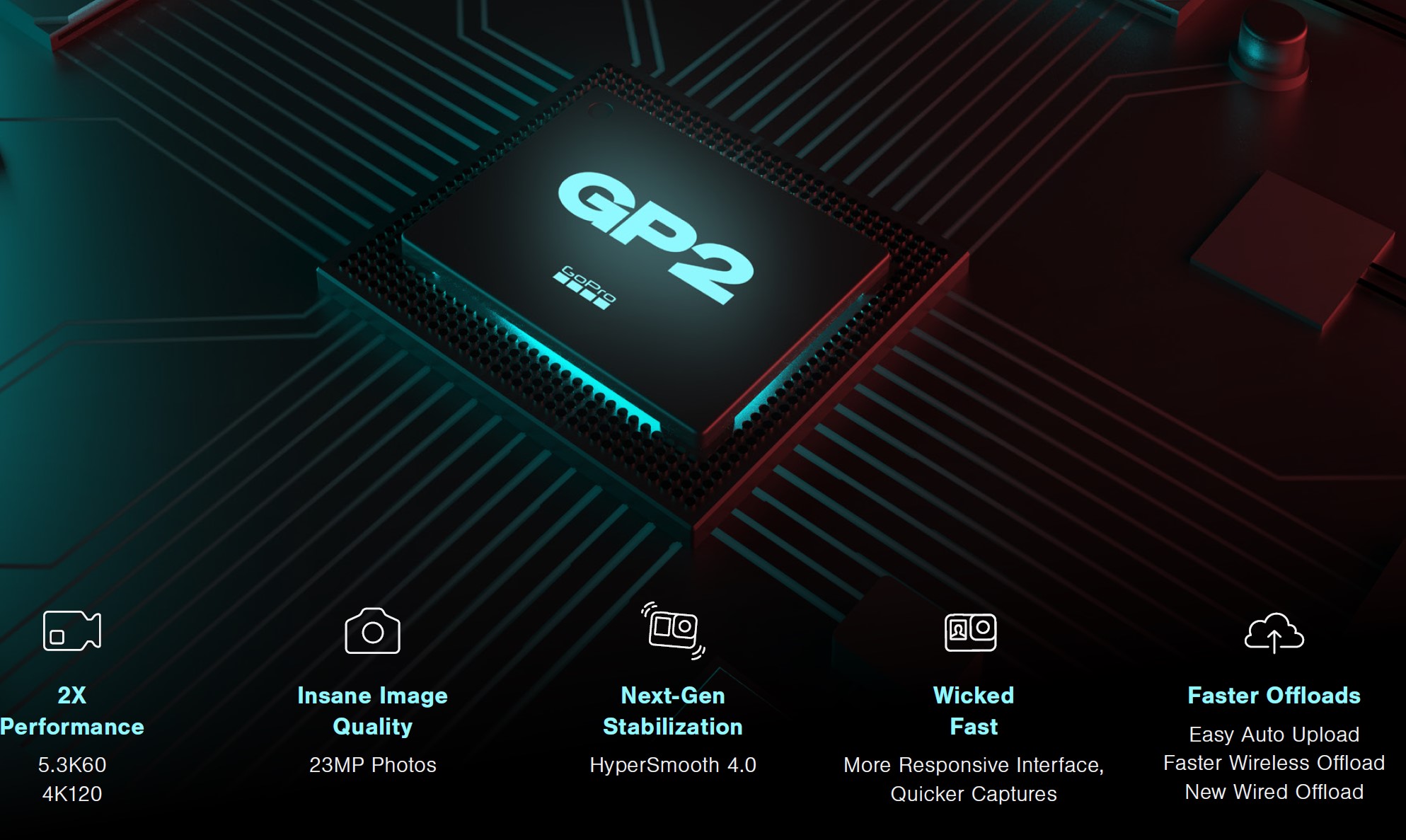 With little to report by way of changes to the design, easily the biggest news this year is that new GP2 processor. This enables some great improvements to the user experience of owning this camera.

Before we get to that, we have to talk about the new best video quality available in a GoPro, with the Hero 10 Black supporting up to 5.3K at 60fps. To understand just how crazy that is, it equates to 15.8 million pixels and they’re capturing 60 frames of that, every single second.

If you’d prefer, you can drop that back to 4K and run it at a massive 120fps and if you use your GoPro for photos, you can now capture in 23MP which is up from 20MP last year.

The reality is that with video quality that high, you are frequently able to take frames out of that video that look stunning like they were shot as individual frames. This provides a serious advantage in once-off situations, allowing you to simply record and then worry about getting the perfect still later.

Thanks to that GP2 process, the front screen now features a higher refresh rate, so motion appears much smoother. While that’s nice to have, but the big improvement is to the rear display, which is dramatically faster to interact with. This feels a lot more like touching and swiping on your smartphone UI, it is just dramatically more responsive than the Hero 9, Hero 8, Hero 7.. you get the idea.

This extra performance from GP2, also enables faster wireless transfers, as much as 30%. GoPro says the WiFi stack is exactly the same, so to see this level of performance gain really does speak to how constrained previous models were.

These improved transfer speeds also extend to wired offloads which are now up to 50% faster than wireless. As the video quality improves, as does the file sizes of your captured content, so increasing these transfer speeds is critical in creating efficient workflows.

GoPro’s video stabilisation tech known as Hypersmooth gets a bump from v3 to v4.0. To pull off this wizardry, GoPro are leveraging the performance of GP2 to achieve that on footage up to 5.3K30, 4K60 and has much improved horizontal tilt adjustment (now up to 45 degrees from 27 degrees).

GP2 has also introduced new algorithms that apply local tone mapping and 3D noise reduction in low light during video capture. I think my expectations were a little high with this one, it certainly does a better job at night, but it’s certainly not perfect, a remaining area of improvement for future generations.

Overall GoPro has done a great job with GP2 and it will be the sole reason people upgrade. What isn’t yet clear, is how many years GoPro can extract from GP2, at some point, a GoPro will shoot in 8K and I feel we may only be a couple of years away from that. This comes with a significant performance requirement increase to decode that many pixels at any reasonable frame rate, so I suspect we’ll need GP3 for that. 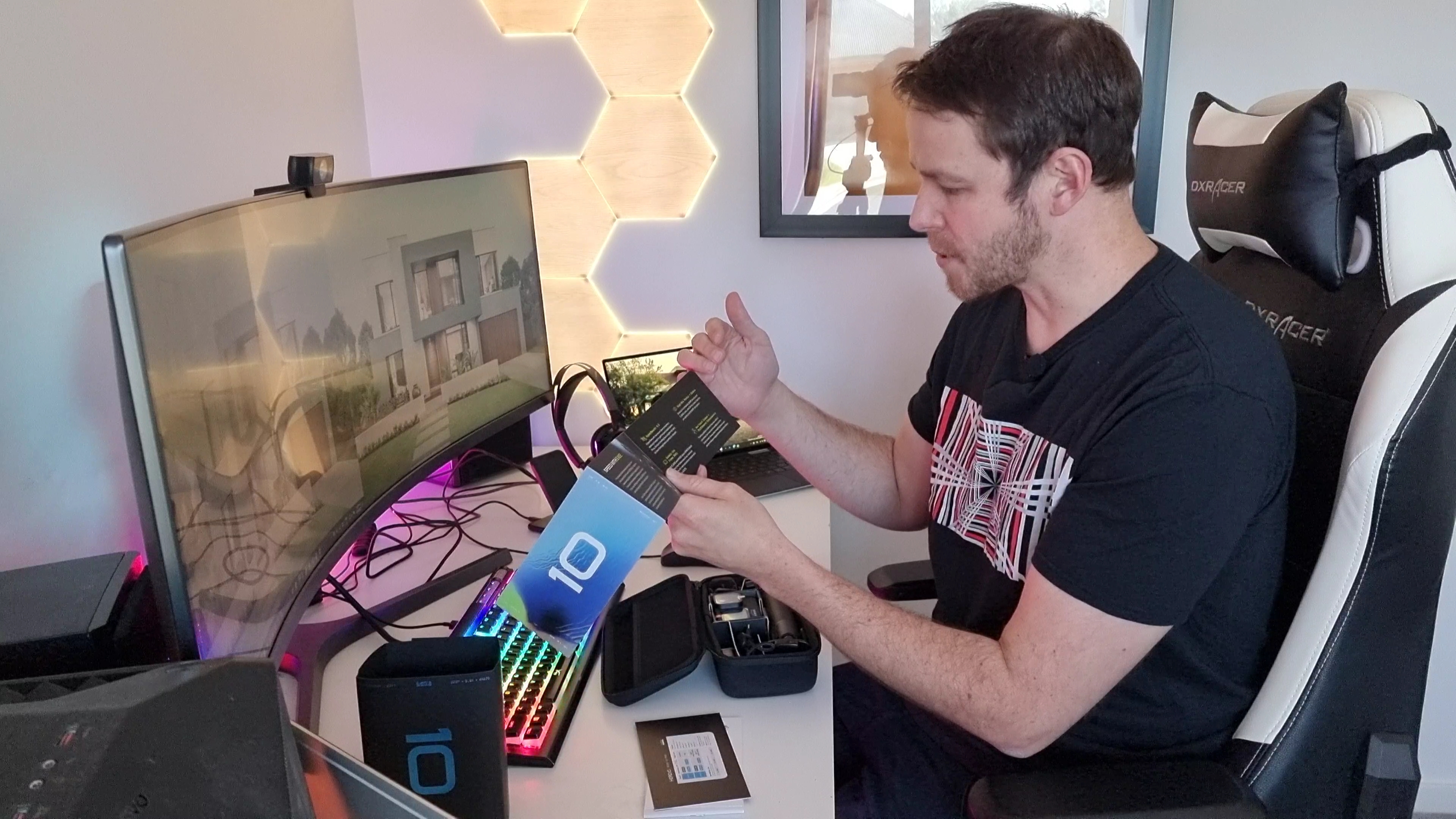 The list of features is pretty insane if you’re a first time GoPro owners, but for those who’ve got a Hero9, you’ll know many of these with some improvements. 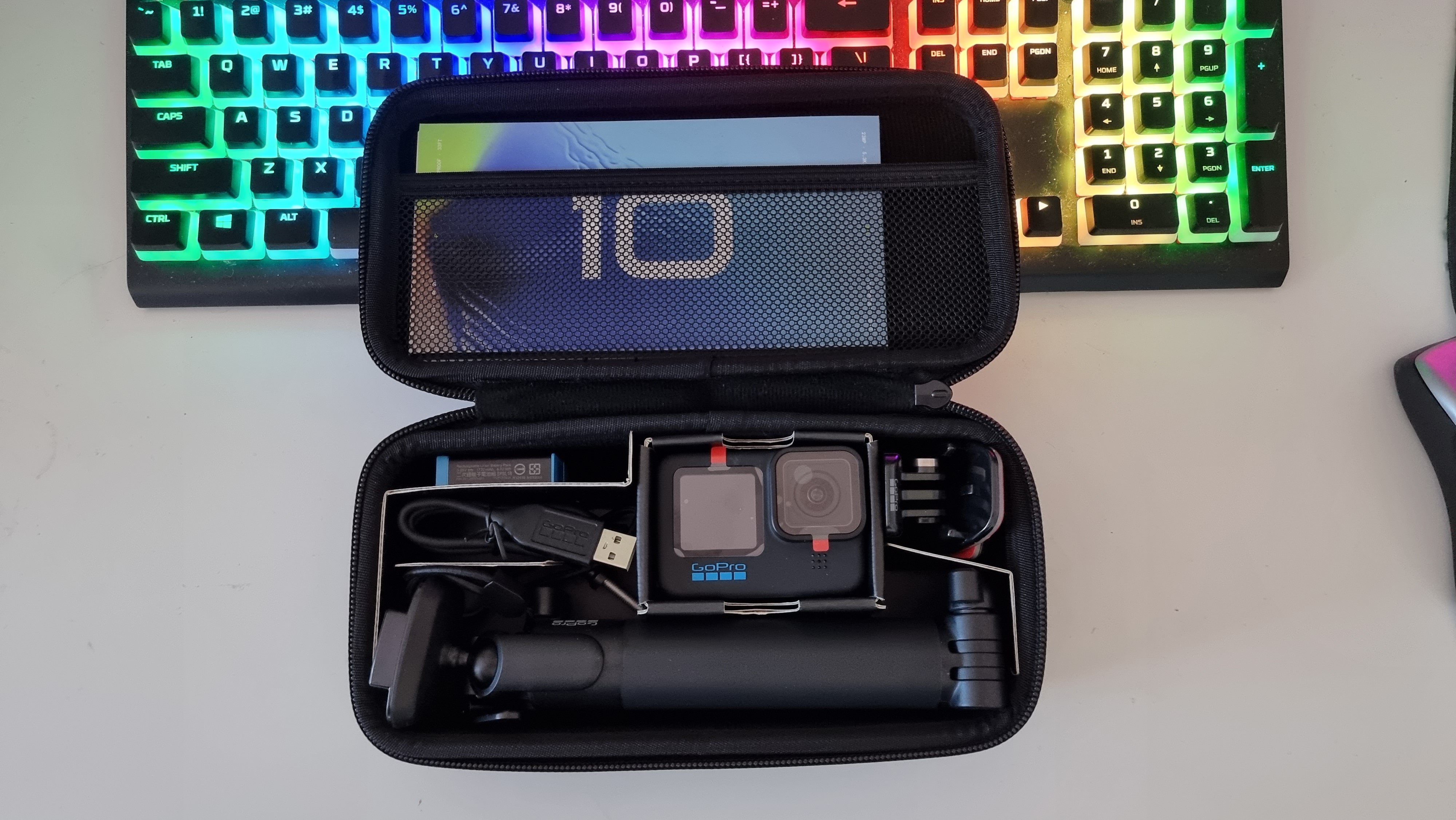 It’s hard to fault the GoPro Hero 10 Black, with a great camera improved on a number of fronts. Perhaps the only downside is that due to the form factor staying the same, the battery capacity remains the same.

When you switch out the processor to support higher quality video and camera performance, naturally battery life does take a hit. GoPro says for the same video settings on the Hero 9, the Hero 10 will offer a similar battery life, but step up to those highest quality settings and it will chew the battery faster.

This may be easy to solve with a second battery, or by connecting the camera via its USB-C port to a power source. 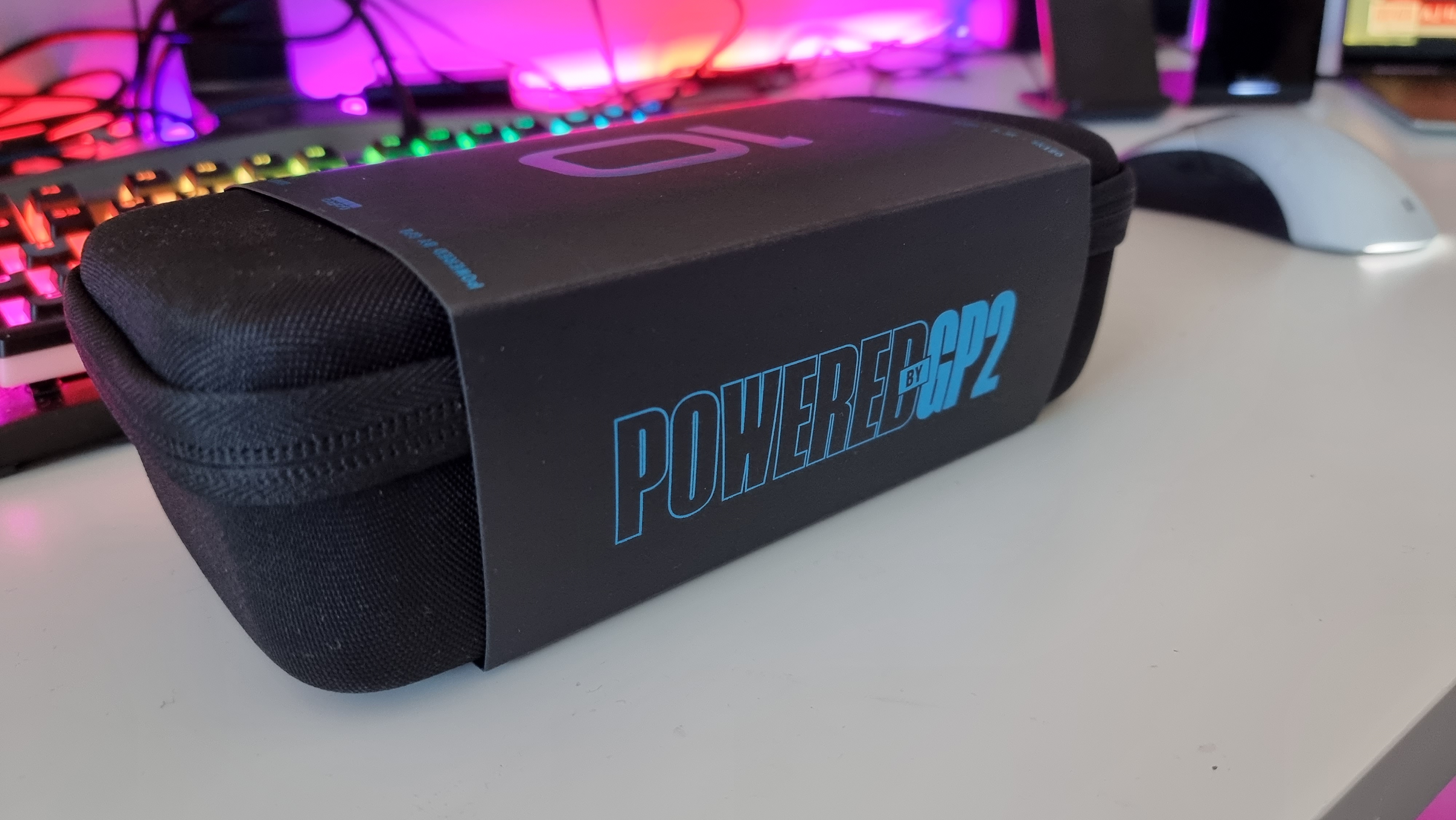 When it comes to price, we seen GoPro really move into subscriptions in an aggressive way last year, offering the Hero9 cheaper on subscription and that was really successful for the company. Naturally, we’re seeing a similar story this year.

The GoPro Hero 10 Black retails for A$599.95 with an included one-year GoPro subscription or A$749.95 without a subscription. Clearly, the subscription is a better deal, just buy with a subscription and if you don’t find value in it, cancel it. GoPro is betting that you will find value and continue to subscribe for years to come.

The GoPro Hero 10 Black is also available in a bundle that includes the camera, additional battery, 64GB microSD card, and foldable tripod all in a travel case.

Existing GoPro subscribers can purchase HERO10 Black at the lower A$599.95 GoPro.com. That subscription gets you automatic uploads to the cloud at full resolution, as well as discounts off GoPro accessories.

The HERO9 Black costs A$529.95 with an included one-year GoPro subscription or A$599.95 AUD without a subscription. This does mean that the new GP2 processor has added to the price tag of the camera by $70, but for the improvements on offer, that’s absolutely worth it.

The GoPro HERO8 Black remains pretty good value at $A419.95 AUD with an included one-year GoPro subscription or A$429.95 without a subscription. If you do get a chance to use the Hero 10, I guarantee you’ll miss a lot of the new performance, quality and features that have arrived in with Hero 10. 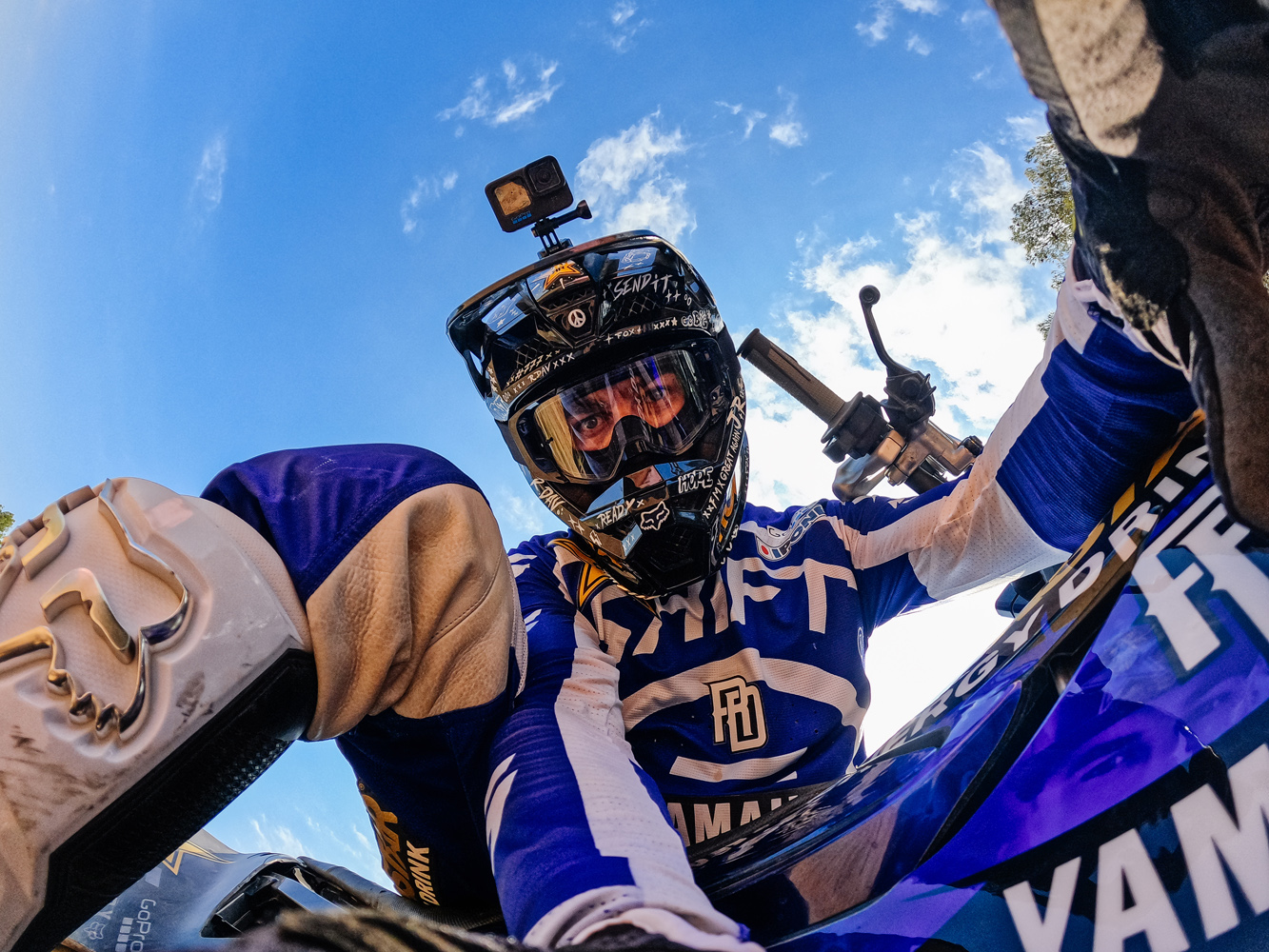 After using the GoPro Hero 10 Black for the past couple of weeks, it really has impressed me. Although the design doesn’t scream I’m new and more powerful, that’s definitely what’s happened inside the camera this year.

GoPro has a tried and true formula of iterating and taking the leap on a brand new processor was clearly a big deal for them this year in terms of engineering effort. I would like to see some new features that address common use cases, like the ability to natively pair a couple of Bluetooth microphones. This would immediately satisfy the needs of many who wish to use the GoPro to capture for interviews.

Overall it’s about the video quality and GoPro once again deliver a camera that captures absolutely stunning visuals of the world around us. In many ways the camera is not our limitation, it’s our imagination (and ability to get out of lockdowns and go use the thing).

If you’ve never owned a GoPro, the Hero 10 would be a great place to jump in. For those who are existing GoPro owners, if you’re back on a Hero 8 or earlier, this is a serious upgrade on what you have and should definitely be considered.

HERO10 Black Million Dollar Challenge
For the fourth year in a row, GoPro is challenging its users to create the launch highlight reel for its new flagship camera.

Beginning today, HERO10 Black users are invited to capture and submit their video clips for consideration to the Million Dollar Challenge on GoPro.com/MillionDollarChallenge. Submissions close Dec. 2 at 4:59 AM AEST.

Jason Cartwrighthttp://techau.com.au/author/jason/
Creator of techAU, Jason has spent the dozen+ years covering technology in Australia and around the world. Bringing a background in multimedia and passion for technology to the job, Cartwright delivers detailed product reviews, event coverage and industry news on a daily basis. Disclaimer: Tesla Shareholder from 20/01/2021
Previous articleArrival Van is arriving in Europe after an initial order of 3,000 units
Next articleElon Musk says FSD ‘Technology probably ready in a few months’, Beta button coming next week with 10.1, access granted only with good insurance data