VR has been a part of my life for the past few years as the industry progressed from a theoretical experience, to one you could have at home. With the right blend of PC performance, VR hardware and budget, you can have a lot of fun, assuming you have the space for it.

After trying Virtual Reality a few times, I really enjoyed it, so I bought an Oculus Rift. While the experience was the best available for a while, time has moved on and now we have a new generation of VR headsets that no longer need the complex setup of tracking sensors.

The Vive Cosmos has tracking built right into the headset with an array of sensors to track the movements of your hand controllers. This provides the magic six-degrees-of-freedom, meaning that you can move in any direction, making your VR experience unconstrained which allows you to focus on being immersed in the content. 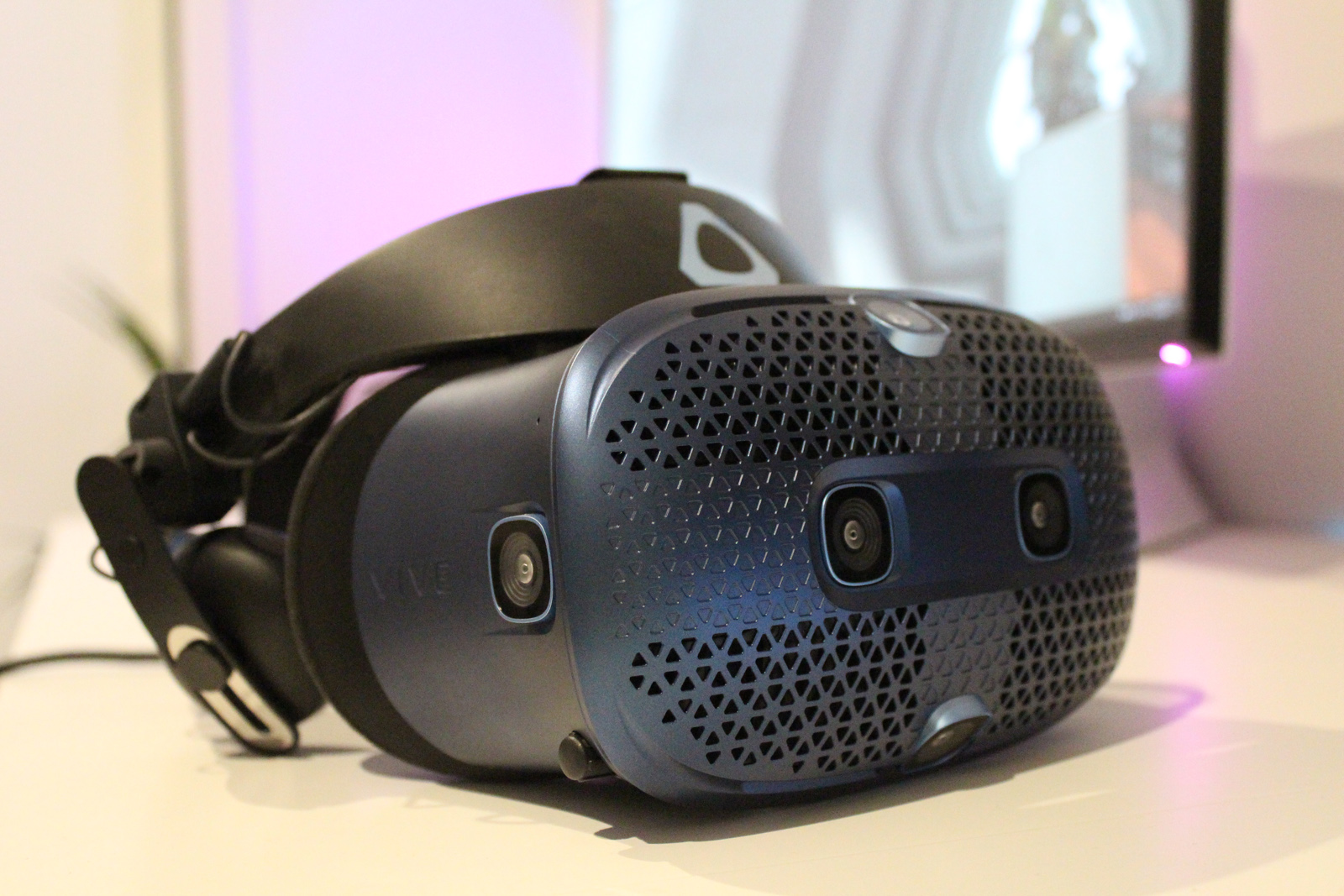 In and out of VR in a flash

The Vive Cosmos headset is designed to fit almost any head size. The welder-mask style head mount means you can firmly attach it to your head, before flipping it down to consume your view. This design element is really appreciated when you have to take a break and grab a drink or have a quick conversation with someone.

Adjusting the headstrap, ear pieces and rear dial are all pretty straight forward, however the weight of the Cosmos is subtantial, so you’ll want to take some time to get this right. Being comfortable when playing VR will immediately determine how long you’re able to spend in virtual reality. The positive about having the headset tight, is that you barely feel the cable connecting the headset to your computer.

The controllers have a seriously unique design and while the illuminated lightning bolts look fancy, there’s a practical use for the design. Almost like a circular QR code, the sensors in the headset can track the controllers thanks to this zany design.

Overall the headset’s biggest design statement is its multiple eyes (or cameras) that are mounted around the surface of the headset. These do a surprisingly great job of tracking the controllers wherever you move. This is important in VR titles where you’re expected to turn around and explore. This tracking would have typically taken a 3rd sensor behind you to achieve and not have the experience broken by a jumping hand. 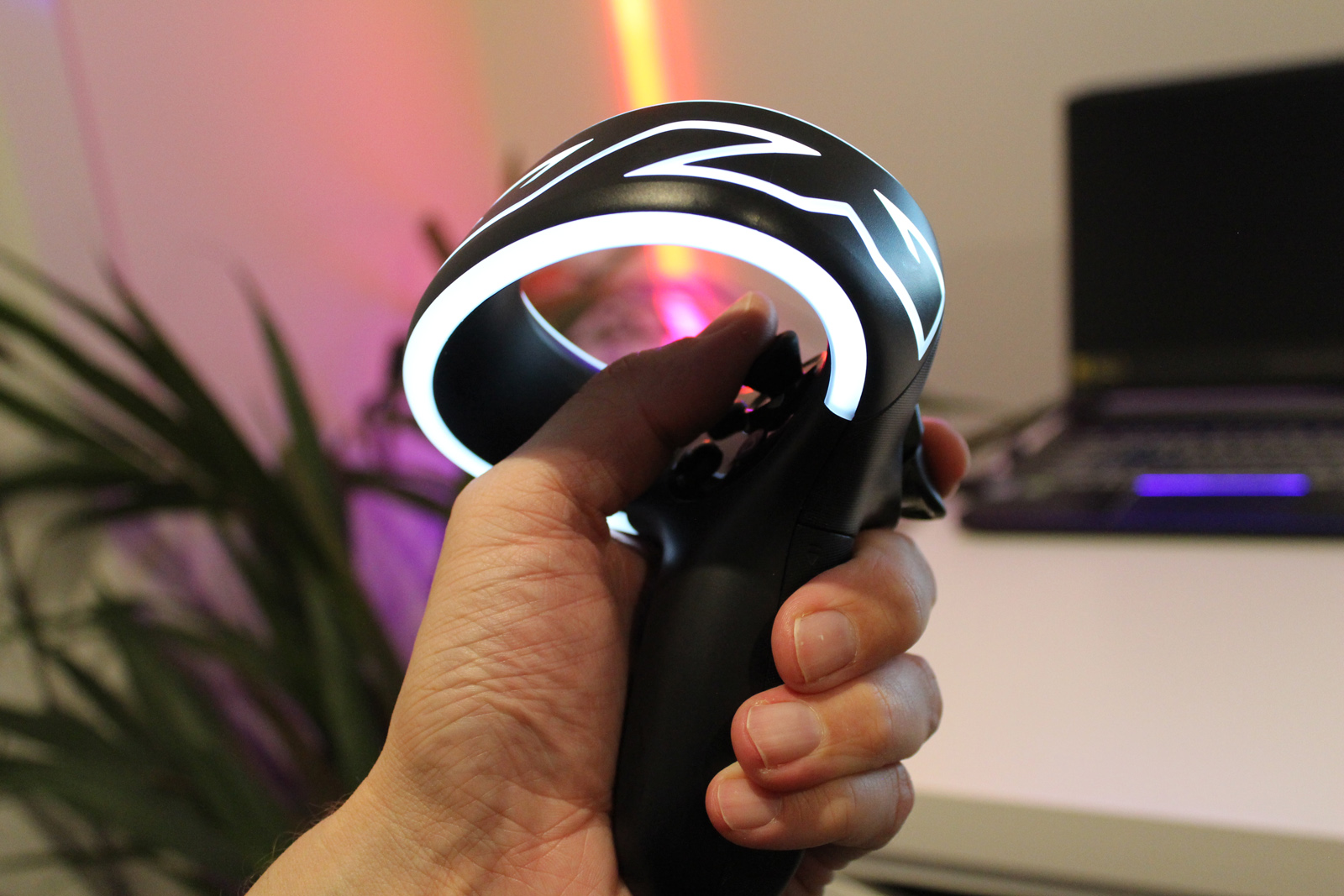 For someone to want to enter (and certainly buy) Virtual Reality, the experience has to offer something that can’t be acheived in any other way. Thankfully the Vive Cosmos provides plenty of content options, both gaming and more experiential titles.

HTC says the Vive Cosmos was built to adapt to the needs of VR customers with ease, versatility, and performance at the forefront. That shows with the new tracking system which does simplify setup and I particularly loved the simply process of pushing the controller to the floor to define the vertical bottom of your environment. I also found defining the safe playing zone easier than on the Rift.

A key part of VR spreading to more people is people’s first impression and being relatively fast to setup, makes a big difference to the user experience. This is all thanks to the six camera sensors for wide and accurate inside-out tracking.

The Cosmos features a combined pixel resolution of 2880 x 1700 (split between each eye) which correlates to an 88% increase over the original Vive. Text and graphics are pretty clear and often I found myself immersed in the environment and forgot about analysing every last detail. It’s still not close to real life, but we’ll get there. The new LCD panels reduce the distance between pixels and combined with real RGB displays minimize screen-door effect.

I did find at times, the headset got warm, but you’re likely already warm from moving your whole body around, this is certainly not a sit on the couch and passively use a controller experience. While there are sit-down titles, the best experience I’ve found is certainly standing and moving around.

The Vive Cosmos has a healthy store to browse, either through the Vive desktop app, or in VR itself. You can purchase titles individually, you purchase a Viveport Infinity subscription, that gives you access to hundreds of top-rated VR apps, games, and videos like A Fisherman’s Tale, Fujii, and Ninja Legends, as well as premium videos from top brands like GoPro, Discovery Channel, and Animal Planet. 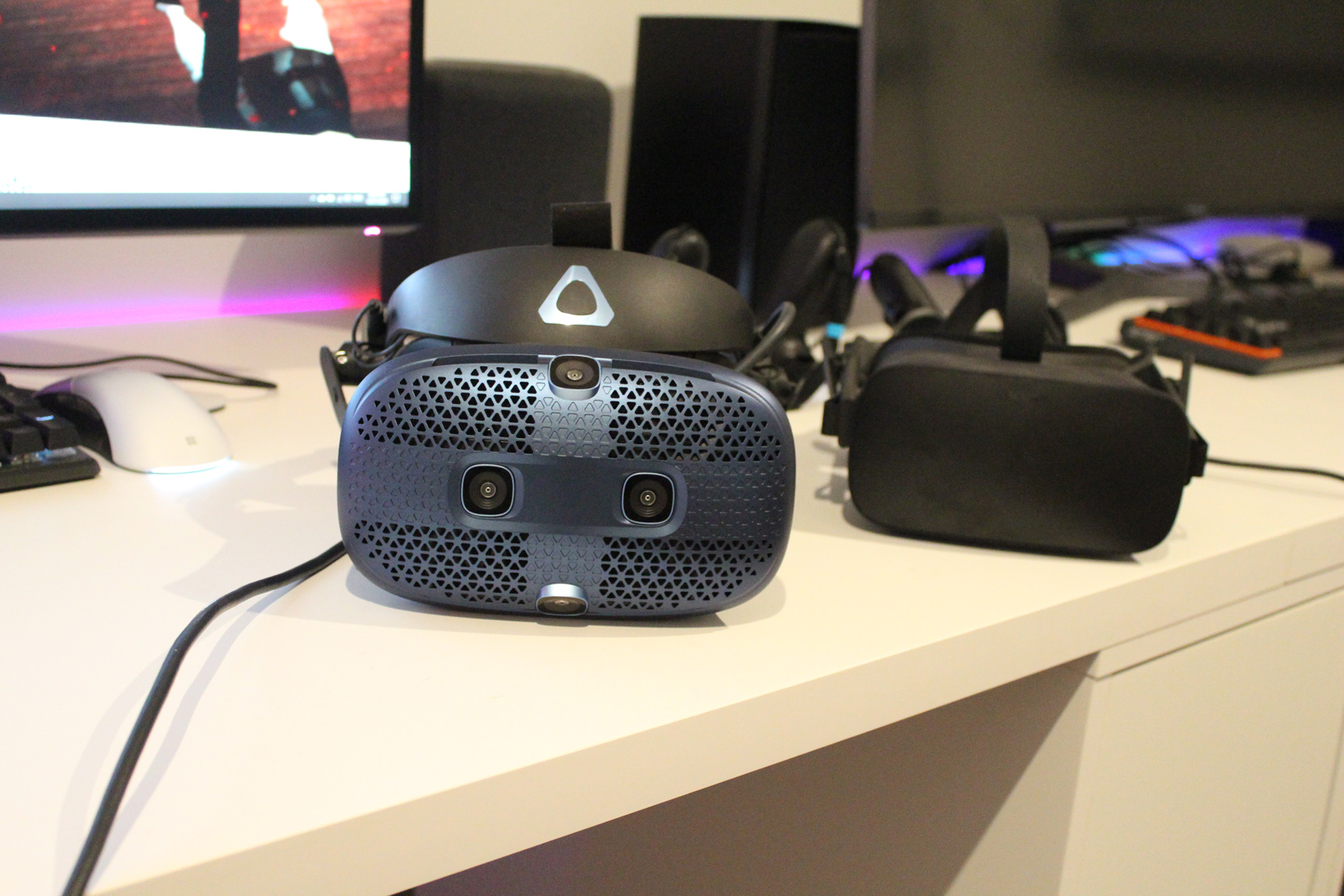 Having access to a new VR headset, after using the Oculus Rift for quite a while, I had hoped that I’d be blown away by a leap in visual quality, unfortunately I wasn’t. If feels a little better, but not the progress I was expecting. If you’re entering VR for the first time, it’s likely you’ll still be in love with the immersion, but it is clear we’re still in the infancy of this industry.

The controllers are ok, but I far prefer the ones from the rift. While there’s almost exactly the same functions, there’s something about the angles of the triggers and buttons that just doesn’t feel natural. I liken this to the personal preference between Xbox and PlayStation controllers. While millions across the globe enjoy the PS4 controller, I’d take an Xbox One controller any day of the week. 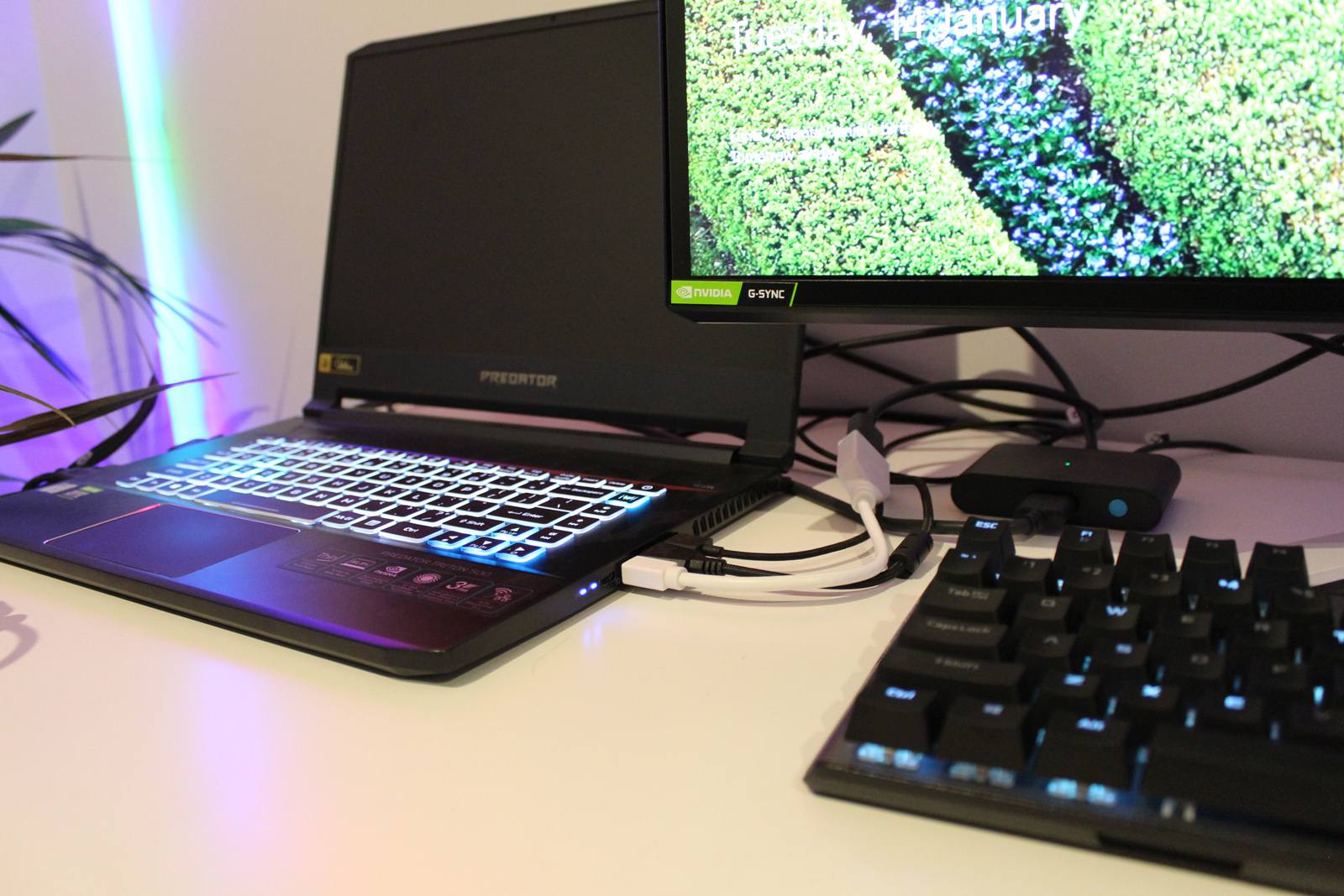 The HTC Vive Cosmos is available now from Vive directly which includes a 12-month VIVEPORT Infinity membership (worth) A$143.88. The setup is also available from range of retailers including Microsoft Store, Harvey Norman, EB Games. The price is fixed at A$1,299.00 regardless of where you buy it and for that price, VR is still clearly an enthusiasts game.

If you have your heart set on VR, this price probably won’t scare you, or if you’re the developer type and want to get into VR content creation, it’ll be part of your learning and development, if you’re successful in creating an app or experience for the store, you’ll make the purchase price back and some.

Given you’ll need a decent PC (or laptop) to drive it, this isn’t the whole cost of a setup, but chances are, you already have a system that’ll run it, if you have a dedicated GPU made in the last few years. 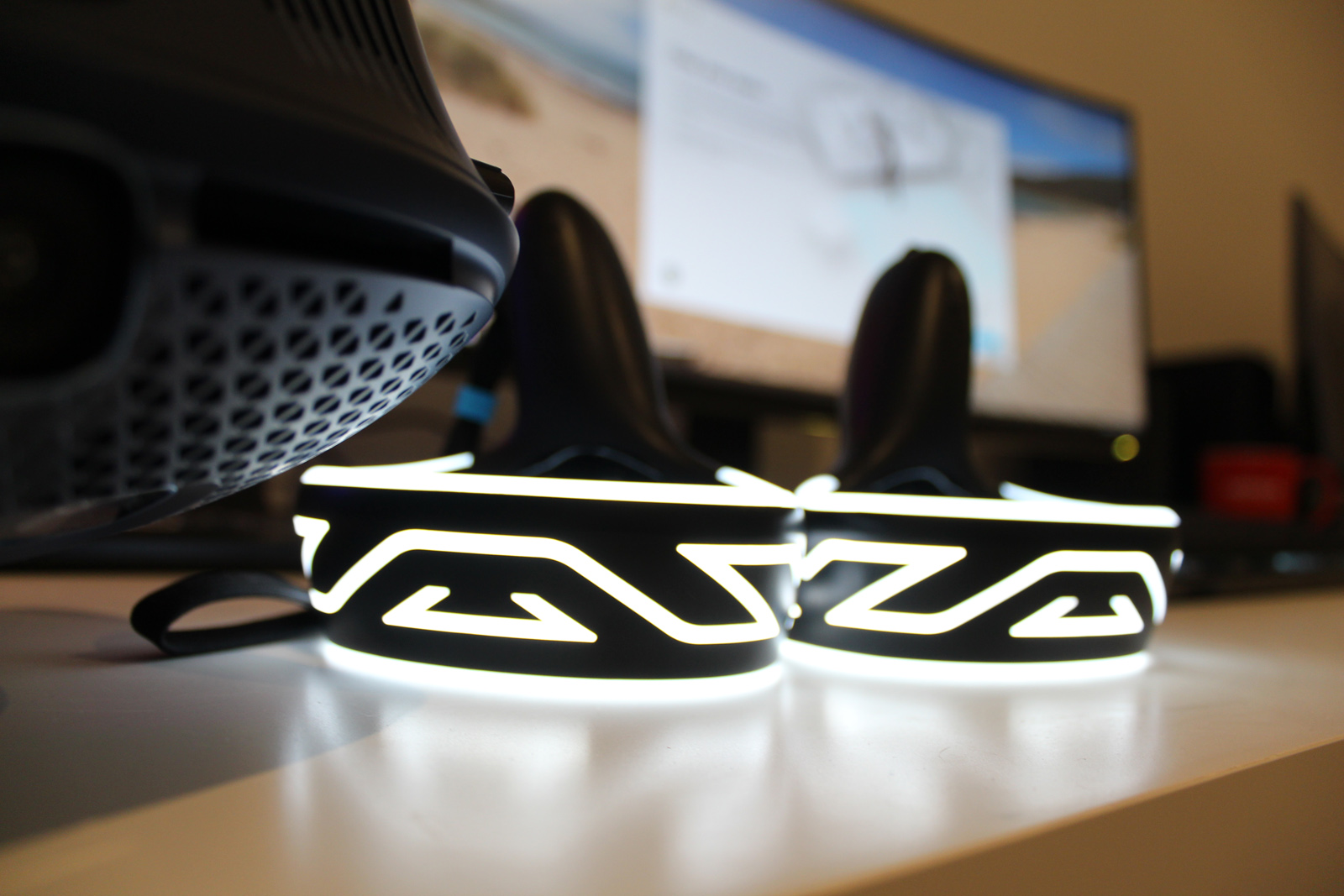 While many thought Virtual Reality would be a mainstream activity by now, it is still proving to be something an enthusiast will introduce to a circle of friends or maybe at a family event like Christmas or a birthday. The experience is getting better, with the Vivie showing real progress, compared to my Oculus Rift of a couple of years ago. The ability to remove sensors from the equation, makes setup easier, but still not simple.

If you’ve got the capacity to, having a dedicated VR room works best, but in most homes, VR experiences will still be a somethings thing, meaning allocating an entire room is an expensive investment of floorspace. It is great to see that dedicated GPU’s in laptops have progressed to the point where they can easily power great VR experiences. This makes a VR solution more portable than having to lug around a gaming PC, however things still aren’t perfect.

Moving the VR setup between rooms, still requires rescanning rooms to establish a safe play area. One of the biggest improvements that could be made right now would be to enable live scanning of a changing environment, much like what Microsoft does with the HoloLens. This really would allow for a laptop, headset and controllers to move easily between rooms, or even take the whole setup to a friends place.

For those creative types who use the Vive to develop VR content, being able to minimise the amount of kit you have to take with you, has real benefits. Each demo will have less setup time, meaning you can do more per day, promoting your work to more people.

All things considered the Vive Cosmos is a great move forward for VR and inside the headset, you can be transported into the virtual environment of a game, but then using the controllers, you get to control it. If you want a more passive experience, that’s available too, showing the diversity of options available.

While the Cosmos doesn’t ditch the cable tether, it does have pretty good quality visuals, ultimately they’re an iterative jump from the Rift, not generational. I wish the price was cheaper so more people would consider it, as I think there’s something special that happens south of the A$1,000 mark, its almost a mental barrier that some can’t breach. At the end of the day, it’s lots of fun and if you’re an enthusiast, then you should definitely consider the Cosmos. If you do, you’ll definitely be a hit at the next party.