I’ve used various 360 degree cameras over the years and the latest is the Insta360 ONE X. It’s their flagship in the consumer range, but Insta360 actually have a serious range of Pro cameras as well. It shouldn’t surprise you then, that the image quality and output avaialable from the ONE X is pretty special.

There’s the quality of the image and video that you get out of the camera that can be a big determinate of your buying decision.. but so are the features and this camera has a long, long list of them. 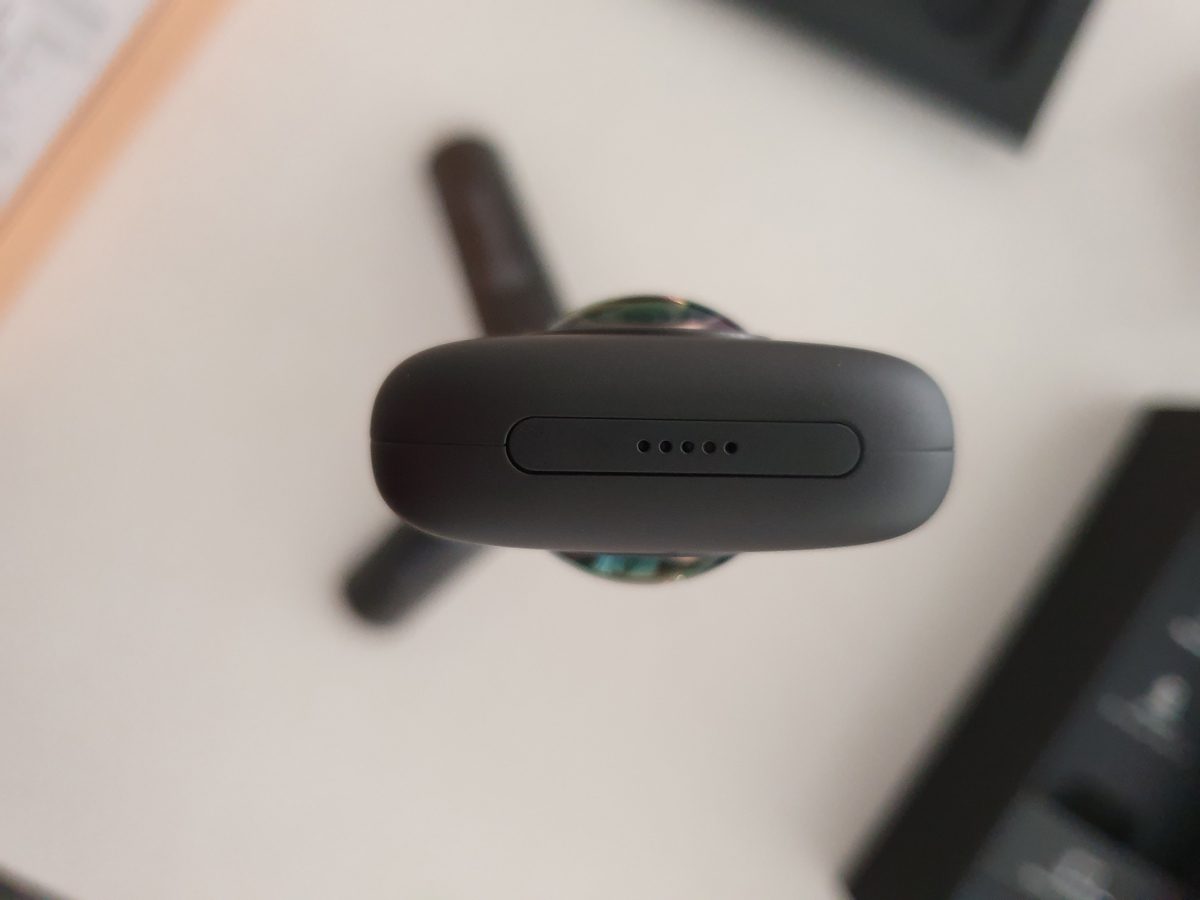 The design of the Insta360 ONE X is a rectangle with nicely curved edges. The dual lenses are the main feature of the body, featuring a lens on the front and back that can capture an amazing 200 degrees. The footage is automaticaly stiched and the field of field of view on the lenses have an overlap that virtually hides any seams in the footage or images.

The body also features 2 buttons to operate the camera. While the two work in harmony to allow you to select modes and change settings. Personally I would prefer a 4-way dpad style selector with an ok button in the middle.

The small circular display matches nicely with the lens above it and round displays are not particularly common (other than watches) in our electronics, so I appreciate them trying something different here. 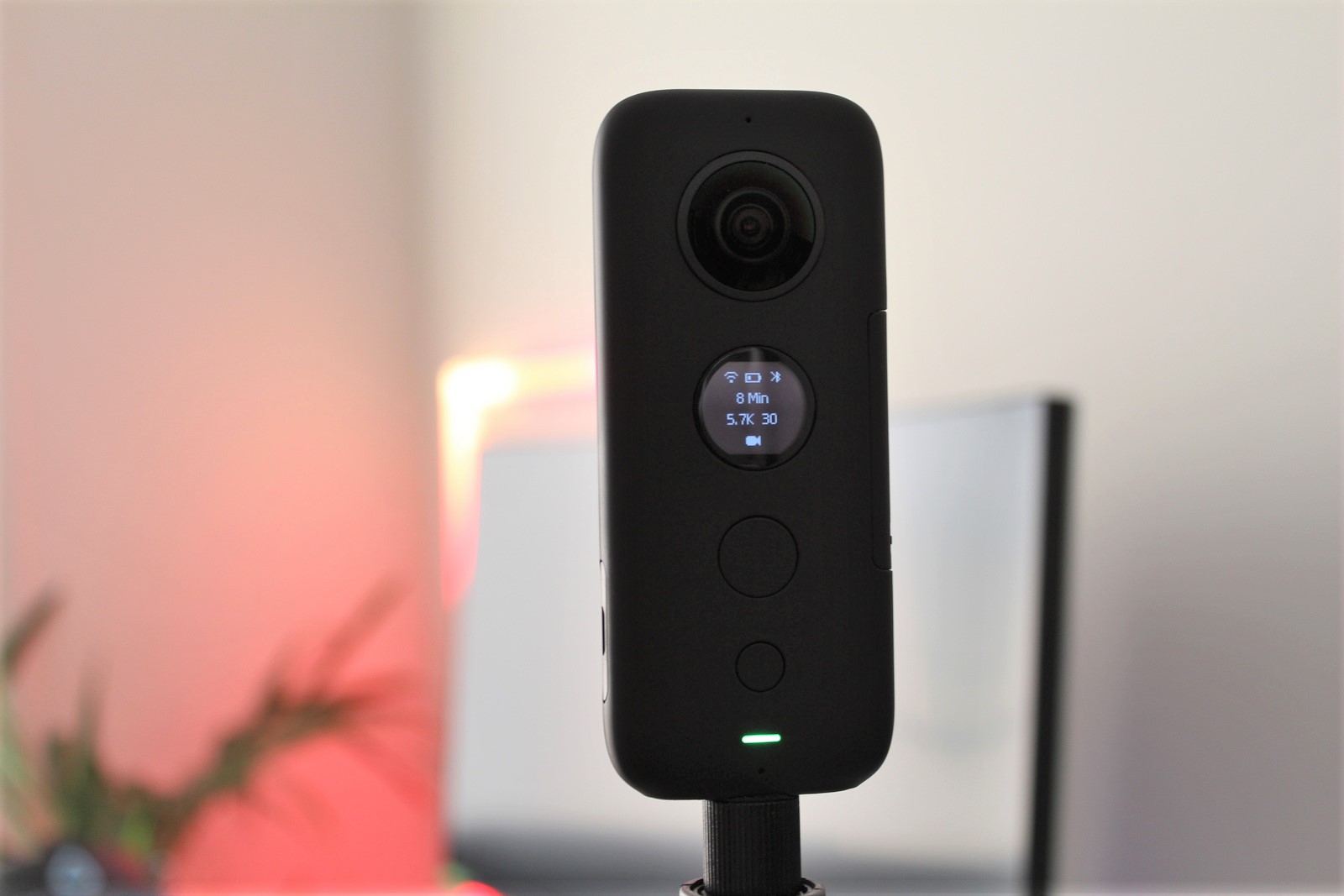 Without a doubt the headline feature for this gadget is the high resolution which is essential for 360. The ONE X features a massive 5.7K video (you can select lower, but why would you), which not only looks great, it can provide the flexibility to crop out content, particularly when exporting to 16:9, 1:1 resolutions for social media.

One of the recent feature additions in smartphones is the ability to capture video higher frame rates. That feature battle is also playing out in the 360 market. The Insta360 offers some of the highest at a mega 100fps, although you do have to drop to 3K to achieve that.

When filming with the camera, you have a choice between the following resolutions and frame rates.

While video is certainly the main focus of this camera, you absolutely can capture 360 photos and they are 18 MP in quality. 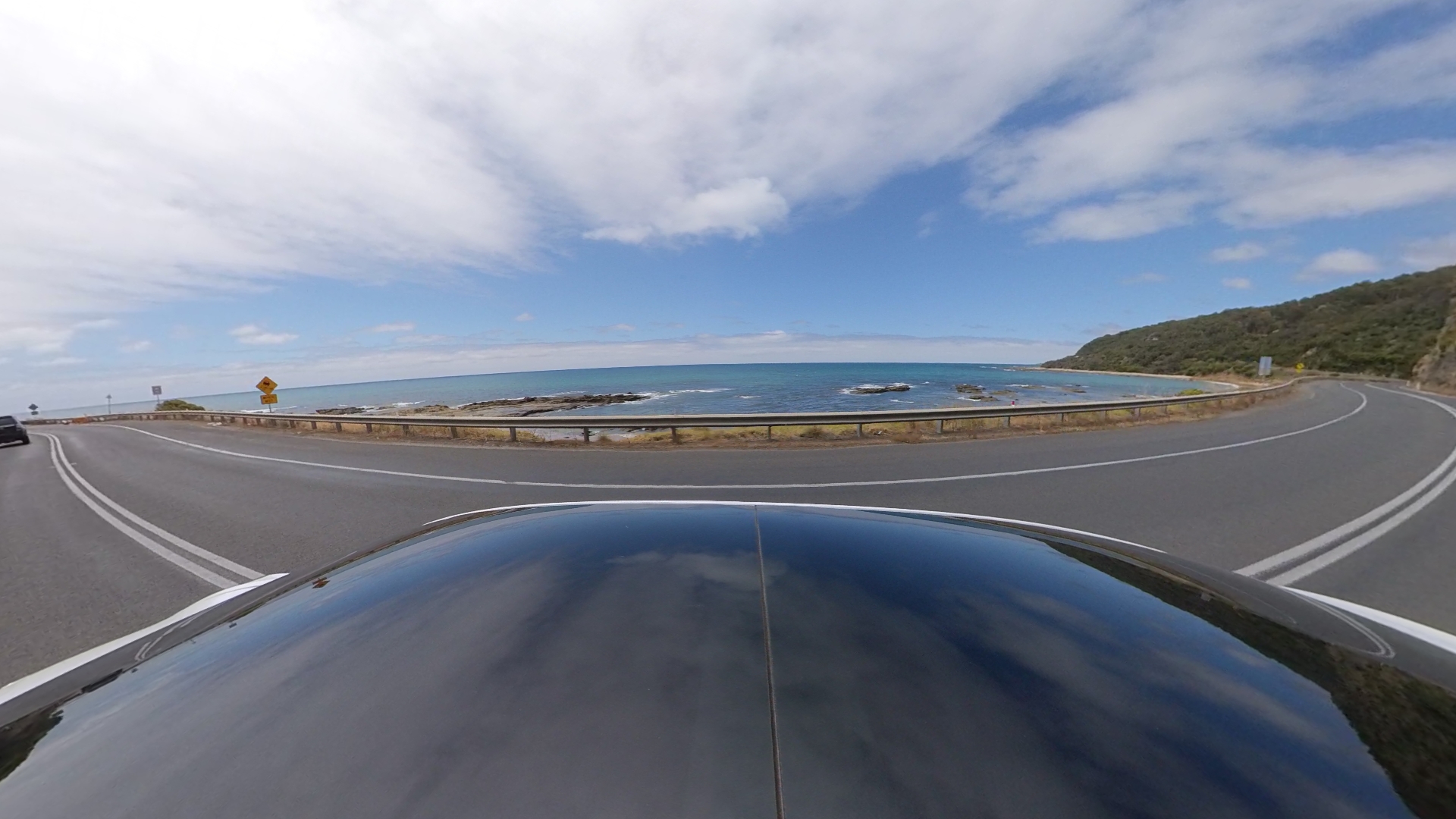 Shooting anything handheld is a recipie for disaster, often producing shaking video to the point where the resulting footage is unwatchable. Thankfully Insta360 have implemented something called FlowState Stabilization to smooth out the human bumps as we walk and run, creating silky smooth footage.

Sure, its not as good as a full steadicam rig, but after seeing some of the footage coming out of the camera, it really is a technology that’s approaching GoPro’s Hypersmooth.

Being able to smooth out the footage means you can create content in so many more situations. I mounted the camera to a GoPro suction mount, inverted on the roof of my Model 3. For those familiar with the GoPro accessories, it’s a hard mount, designed to keep things stable, but inevitably, there’s a lot of movement. I was seriously impressed at the resulting footage and just how smooth it was. Insta360 even suggest mounting it on your dog, which has one of the highest ranges of natural movement, far greater than the hand/arms of humans.

Reviewing the @insta360 One X at the moment.. Tried it out in the @tesla #model3 thoughts on the result? pic.twitter.com/shpULd3tMr

Being able to capture the world in every direction certainly creates some interesting opportunities. While we often think of 360 content as handing over the director controls to the audience, there is an ability to edit your footage and focus the audience on what you think is important.

When editing, you can drop points throughout your clip in the editing interface. The camera will follow along, panning smoothly to wherever you want. It is important to remember that often people who use a camera like this, don’t have a bunch of friends (or camera people) to frame the shot perfecctly, often captures are done solo, which makes editing in post a great feature of the camera.

The ONE X can shoot 4K@50fps and 3K@100fps modes. 360 slow motion allows you to play back the best bits in slow-mo without missing a frame.

TimeShift is a blend of FreeCapture, hyperlapse editing and slow-mo editing to give a speed ramping effect which is pretty wild. You get to control the speed for different parts of your clip. Slow it down to highlight high-speed action, or speed it up to skip through time (or the boring bits).

You now have total control over both time and perspective in your edit.

Transferring files (often hundreds of GB in size) can be painful. Thanks to the ONE X’s use of modern WiFi standards, the transmission to your device is super-fast. You can get a real-time preview of your shots on your phone and then send over your footage in a snap. If you prefer, you can use a cable too – the ONE X’s includes transfer cables for both iOS and Android.

Insta360 are one of the first to implement HDR video. While its great to see the feature, it does have a fairly big limitation right now, that’s HDR video is designed to work with stationary shooting. This means putting the camera down to shoot a sunset will work great, putting it in your car where it’s got full sun coming in through the windows and shadows on the interior, doesn’t work so well. In addition you can turn on HDR to take photos with it. 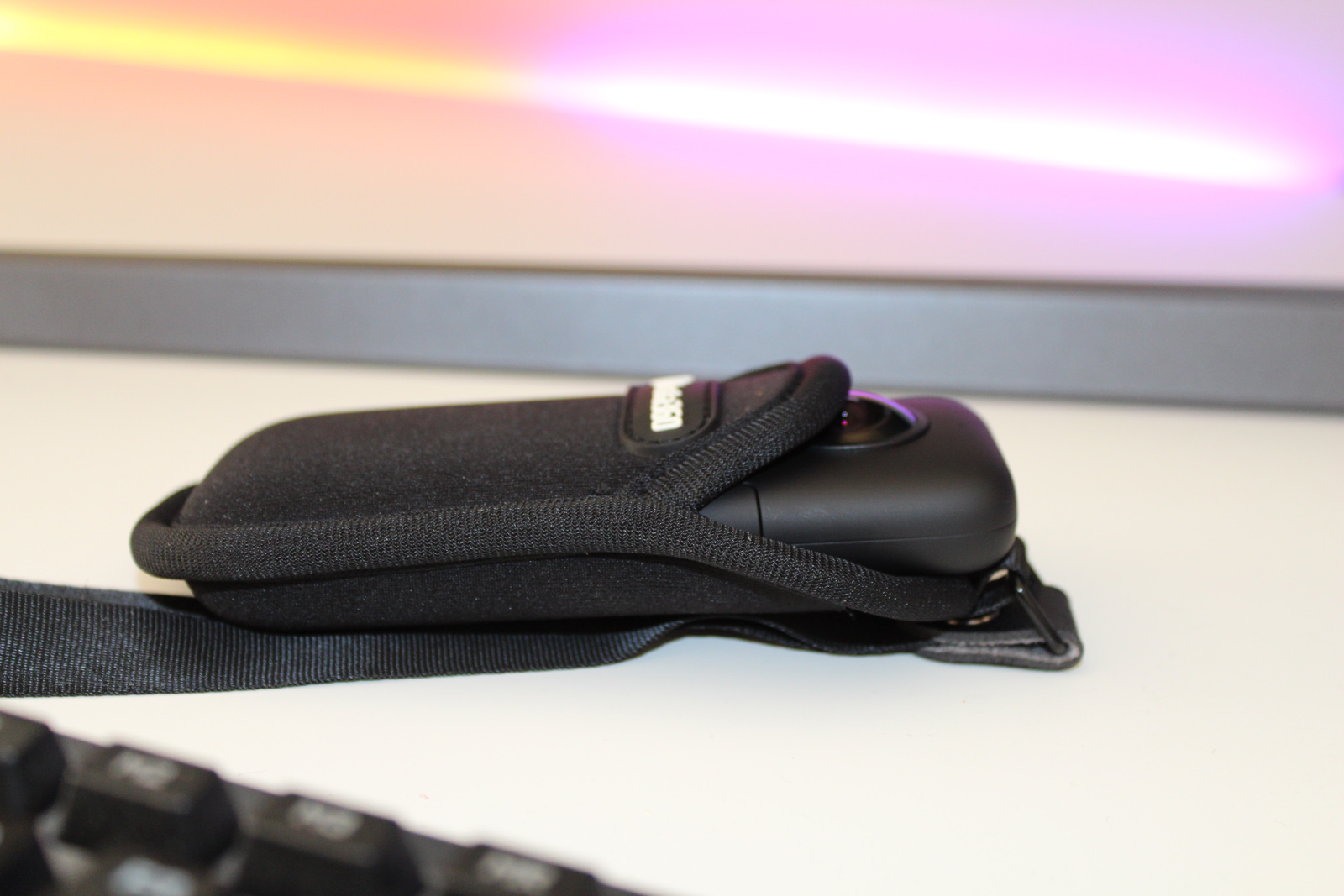 My biggest issue with the camera is the same issue I have with all 360 cameras.. it’s difficult to transport. With something like a GoPro, or even your phone, you can throw it in a bag to transport it between shoots. With the 360 camera, transporting it in the car can be a nightmare.

While the mini tripod it ships with is great to stand it on your desk, but moving it between locations really is not easy. Included with the camera is a Protective Pouch, but strangely this doesn’t really fit the camera, with the top quarter still exposed.

Thankfully there are after market solutions to this problem, namely the Large Carry Case by CamGo, available on Amazon for $39.95. For the price of the camera, I really would expect something like this travel case to be included.

The final issue I experienced was the desktop software only allowing you to export in conventional 16:9 aspect ratio, rather than matching the export options (including 360) available in the mobile app. The desktop app just feels a little underdone right now, so hopefully we see plenty of updates in the future. 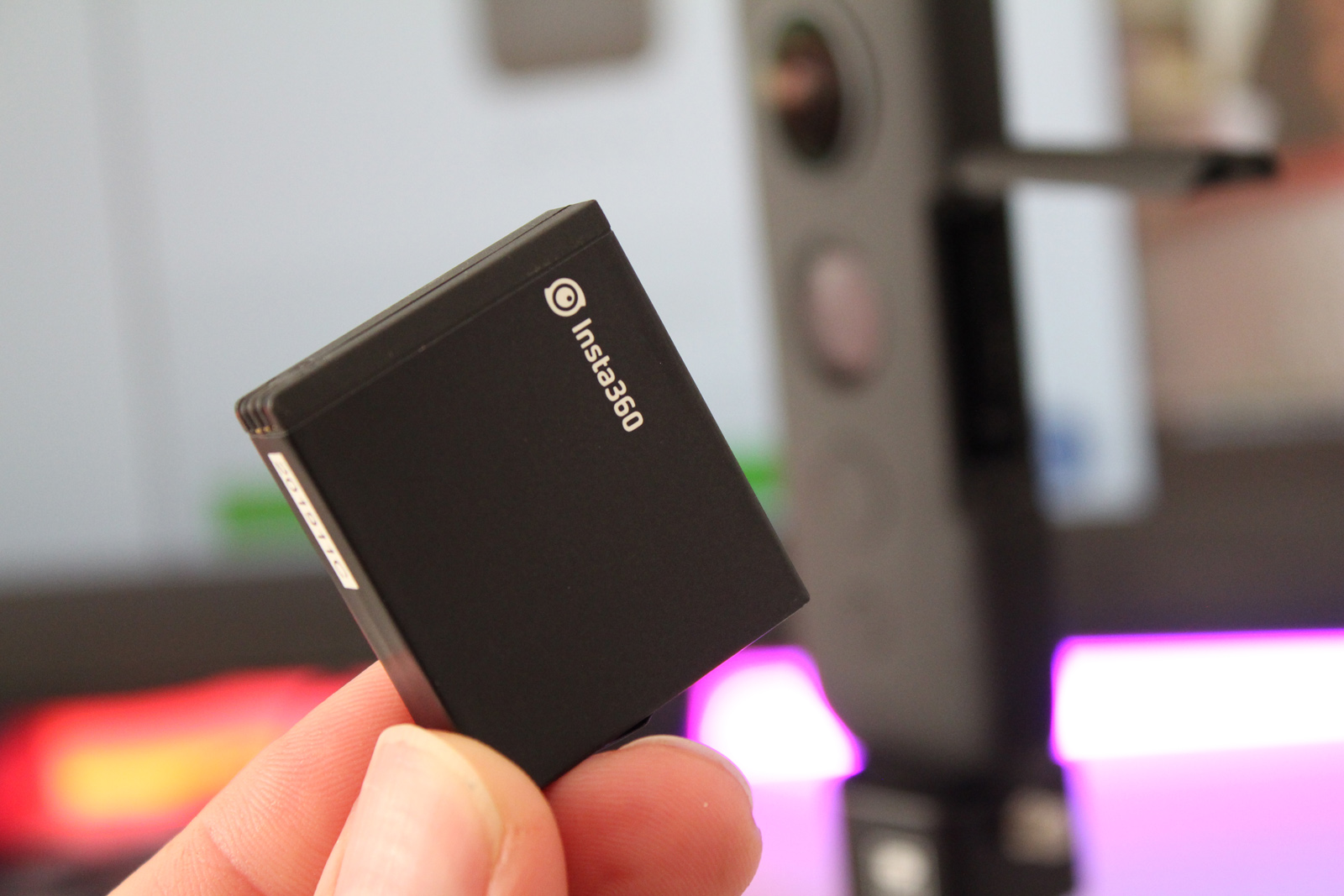 For that price, you get the camera and battery, as well as mini tripod, and extendable selfie stick. It’s a neat pacakge that would allow for plenty of shooting scenarios. When you reach the end of that functionality, there’s actually loads of accessories avaialble for the Insta360 ONE X. 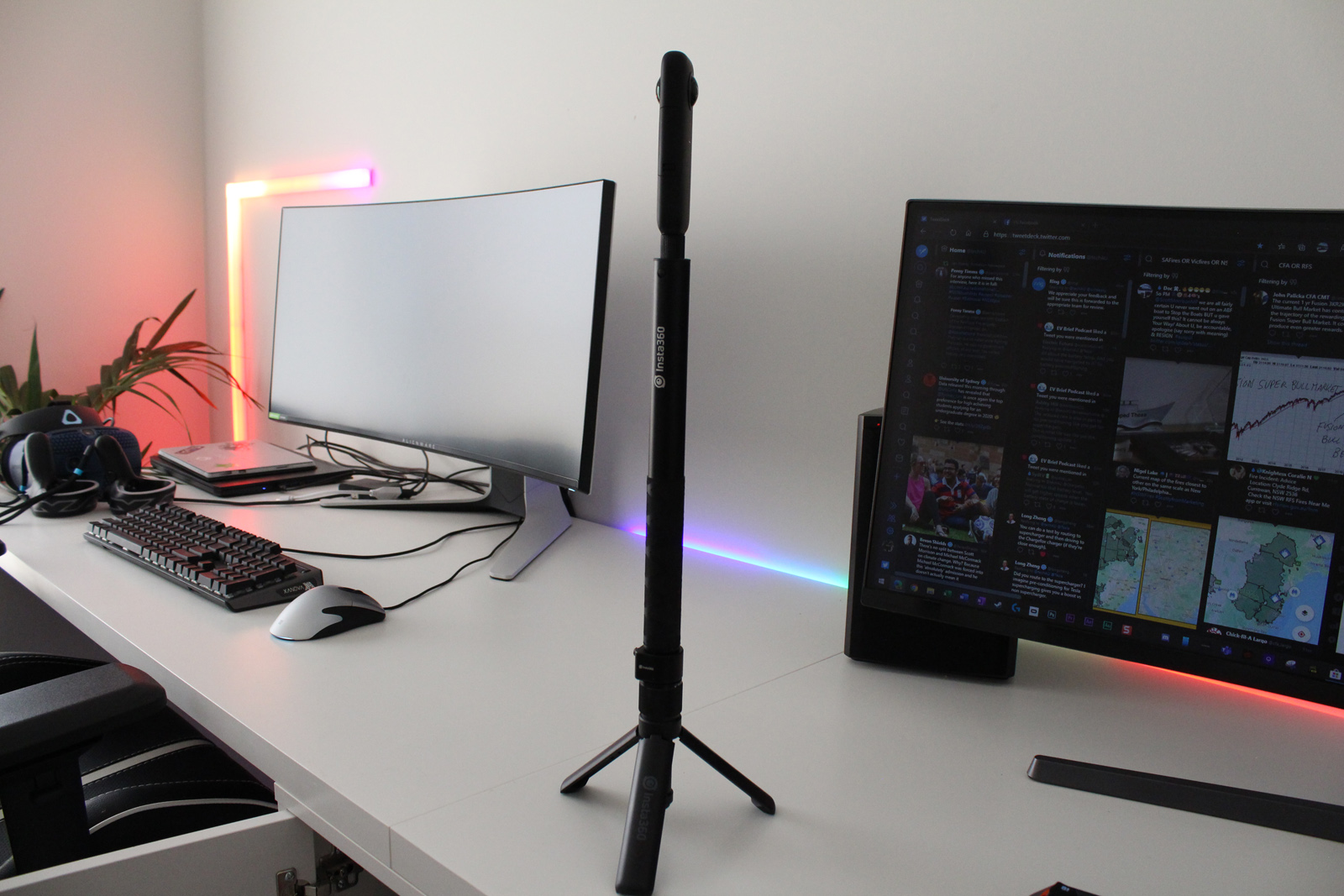 All things considered, this camera offers a broad set of features that should provide the functionality 360 camera owners are chasing. The most important things are really the image quality, as those pixels get stretched around all the degrees, you need lots of them to create a half way decent end result. Thankfully the Insta 360 One X offers 5K resolution which actually looks great.

While its easy enough to shoot and publish the 360 content to YouTube or Facebook, I think most content will get editing. Having the ability to do some quick and dirty editing on the mobile is great, but breaking out to the full desktop app or even Adobe products is even better.

The best thing about the camera is its ability to just hit record and focus on creating great content, or capturing the world around you. I’d definitely love to see the display upgraded to a larger touchscreen display.

I’d love to see better options for protecting the lenses while throwing it in your bag, which did limit the number of places I chose to take the camera (holding it while driving was not an option).

Based on the competition, I think the price is spot on and if you’re in the market for a 360 camera, the Insta360 One X should definitely be at the top of your buy list. 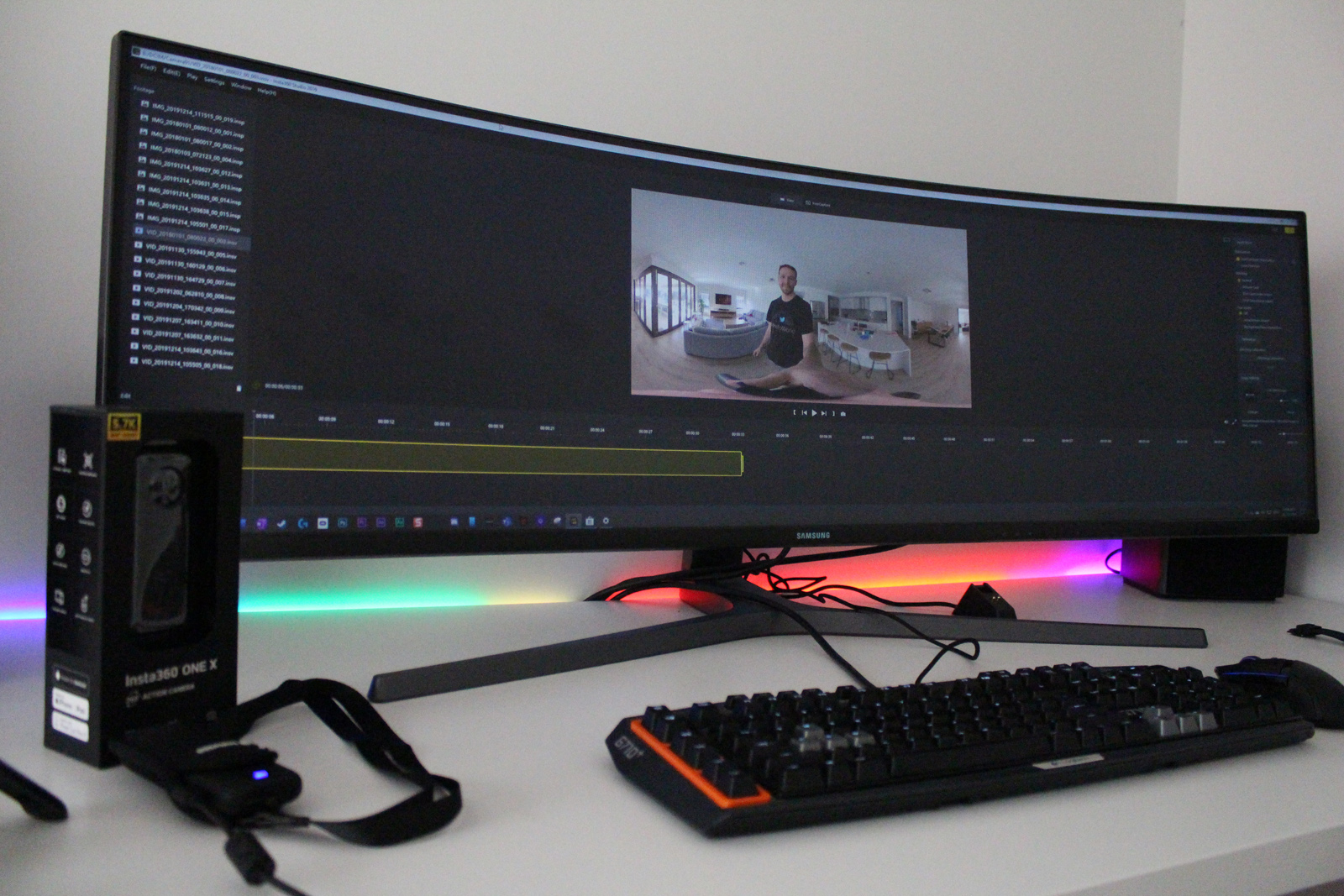 Jason Cartwrighthttp://techau.com.au/author/jason/
Creator of techAU, Jason has spent the dozen+ years covering technology in Australia and around the world. Bringing a background in multimedia and passion for technology to the job, Cartwright delivers detailed product reviews, event coverage and industry news on a daily basis. Disclaimer: Tesla Shareholder from 20/01/2021
Previous articleMerry Christmas! Hope you found technology under the tree this year.
Next articleAustralia’s Online Piracy problem halved in the last year, thanks to streaming services and the NBN