There’s many reasons you may need to seek out a USB webcam. It may be that the quality of the webcam included in your laptop isn’t great, or that you’re using a desktop computer monitor without a webcam built in. It may be that you’re setting up a multi-cam streaming setup, or just want more flexibility in positioning.

Regardless of the motivation, there’s plenty of webcams to chose from in the market, but when Poly reached out with an offer to review their latest Eagleeye Mini, it looked like an interesting option, so I said yes.

After spending a couple of weeks with the Eagleeye Mini, it’s time to break down my thoughts on the webcam. 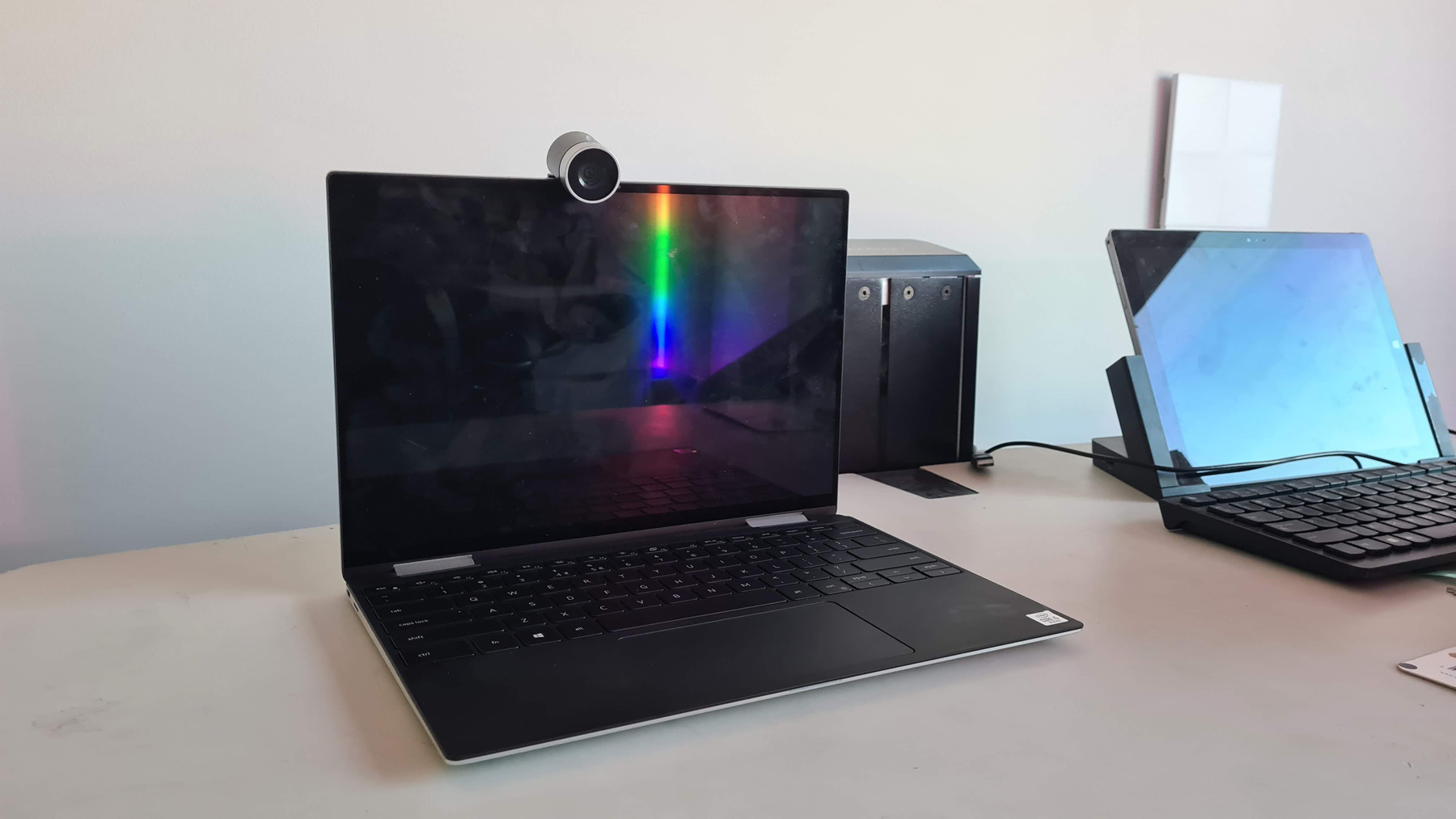 The design of the Eagleeye webcam is fairly straight forward, it has the camera’s lens system, housed in a silver shroud, connected to a black body that is made up of two parts, on a hinge. This hinge allows some adjustment, but it’s what the webcam plugs into that’s the real trick to this design.

When Poly designed this, they knew it would be used in a wide variety of setups, so made a real effort to accommodate as many of those positions as possible. The most natural is resting on top of your monitor, but thanks to an almost snake-like mount, this webcam can clip to the bottom of your monitor. Perhaps even more unique is the inclusion of a tripod mount in the bottom of that clip. This enables you to connect the webcam onto a tripod (there’s plenty of mini, desk-scale tripods available) and essentially position this camera wherever you like.

This design flexibility is often lacking in devices in this price point and is really appreciated. Given COVID, many of us are working in, or between a number of different working environments. The ability to mount the webcam on either the top of my monitor, or on the top of my laptop, means setting up for video conferencing on Microsoft Teams is easy in almost any setup. I also have a standing desk where the inbuilt laptop is too low, something resolved by adding this webcam and it’s adjustability.

While there a subtle LED status light on top of the webcam, there’s nothing offensive or dramatic about the design, its clear that most of the effort went into well designed functionality and that’s the best design attribute you could hope for. 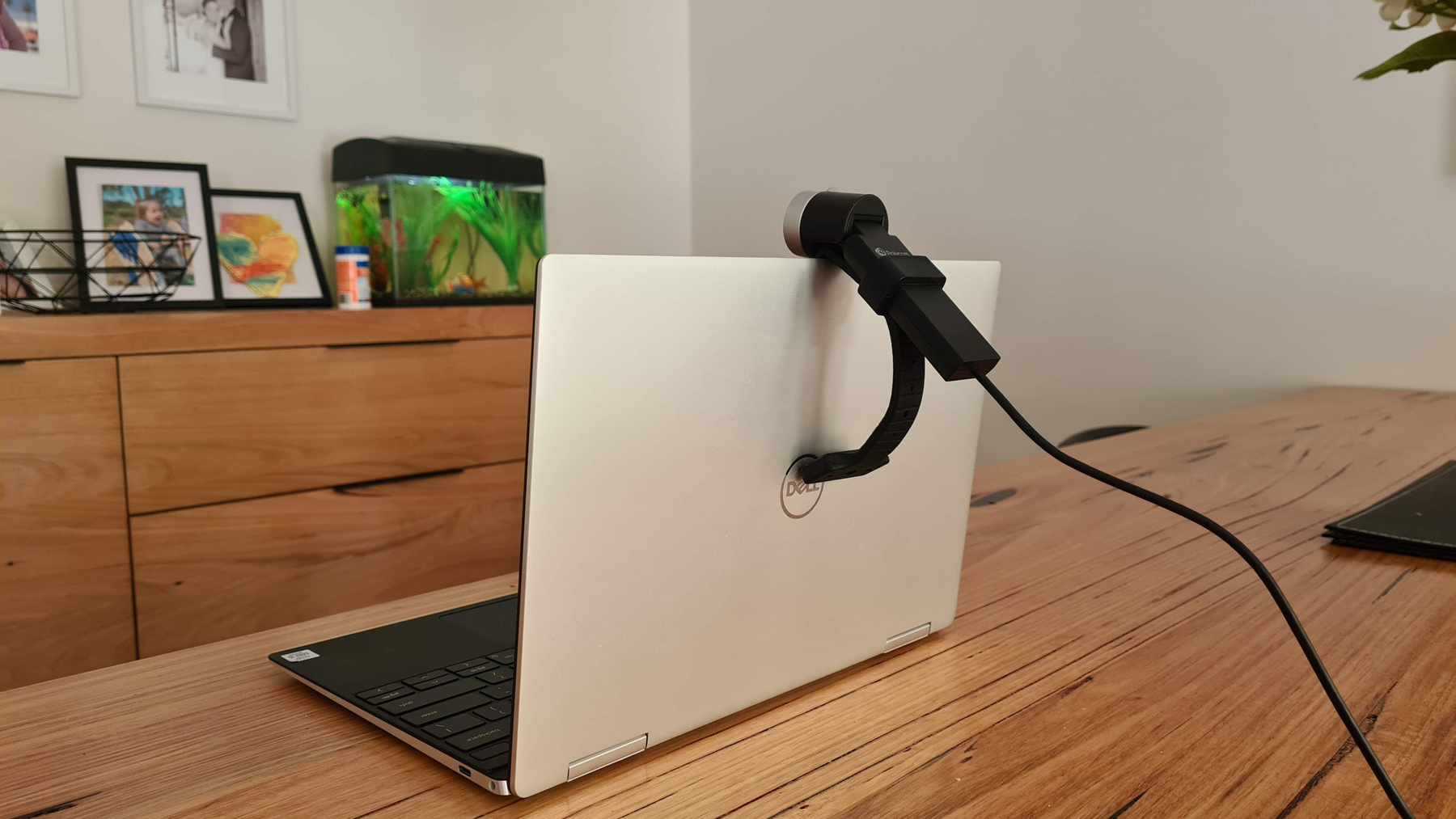 The only real way to speak about performance on a webcam is its image quality. With the Poly Eagleye, I’d say the image quality is good, much better than your standard webcam which surprisingly is still often just 720p, even in 2021. To step up to 1080, you obviously have many more pixels to play, so the picture looks better.

As with the camera in your smartphone, the resulting images and video that it takes is also a symptom of the optics that you have. While not an exact science, generally the larger the lens and image sensor, the more light you’re able to capture and in that respect the Eagleeye does a good job.

When there are 4K webcams on the market, I’d reserve any reference to ‘great’ image quality for them, or perhaps the newest flavour of the day, turning your DLSR into a webcam. In many ways, this is not a fair fight, given you’ve likely spent thousands of dollars on the body and glass of a DSLR and the manufacturer then works out the software to enable it to behave like a webcam. Even GoPro have their version of this (still in beta).

For the price, the image quality is decent value, but after switching back and forward between this and my Logitech C922 webcam, I’d take the Logitech everyday of the week. While autofocus response felt fairly similar, the clarity of objects and faces, is just better with the Logitech, however it does cost a little more.

Below is a gallery of screenshots, taken from different source cameras. This demonstrates the difference in image quality between the different cameras. 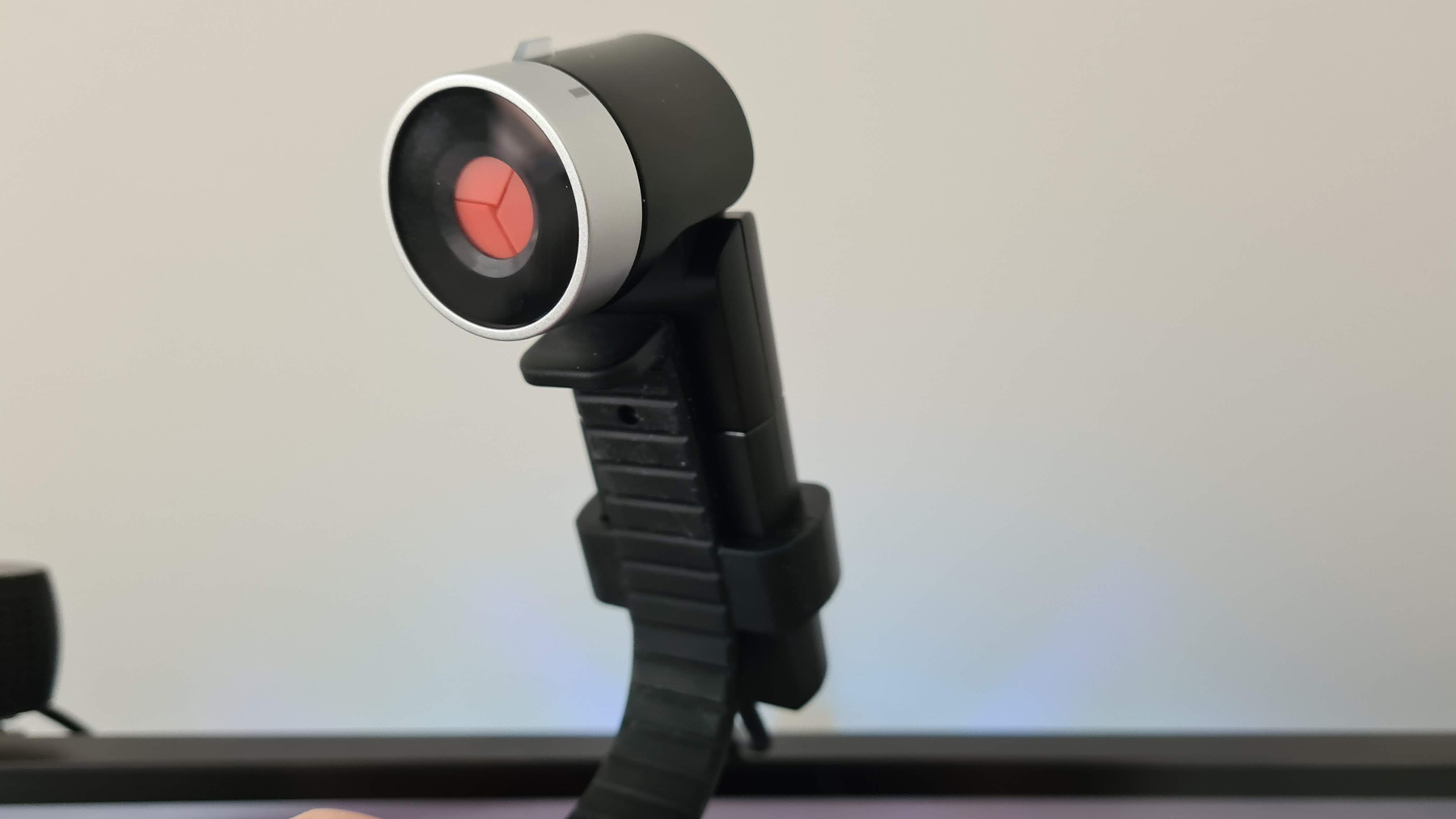 Stand out features of this webcam.

Poly has integrated a privacy shutter right into the webcam. Just simply twist the end of the webcam and you’ll see 3 orange segments rotate to create a complete closed surface, offering a hardware barrier to any potential hackers. While it’s not something I personally worry about, there’s certainly many people who do, so this should give them piece of mind that when they disconnect, they’re really offline.

Setting up the camera couldn’t be simpler, just unbox the camera, mount it and connect it to a USB port. I’ve used by USB ports directly on devices (laptop and PC), as well as USB-ports in a USB-C Hub and all work well.

The camera has a number of controls, which is surprisingly rare on webcams these days. This supports different display modes, – normal, full or crop as well as control over brightness levels and frame rate.

If you have a need to digitally zoom the image, you certainly can do that with the EagleEye Mini, which is a nice feature, although you will lose definition in the image when you do this. 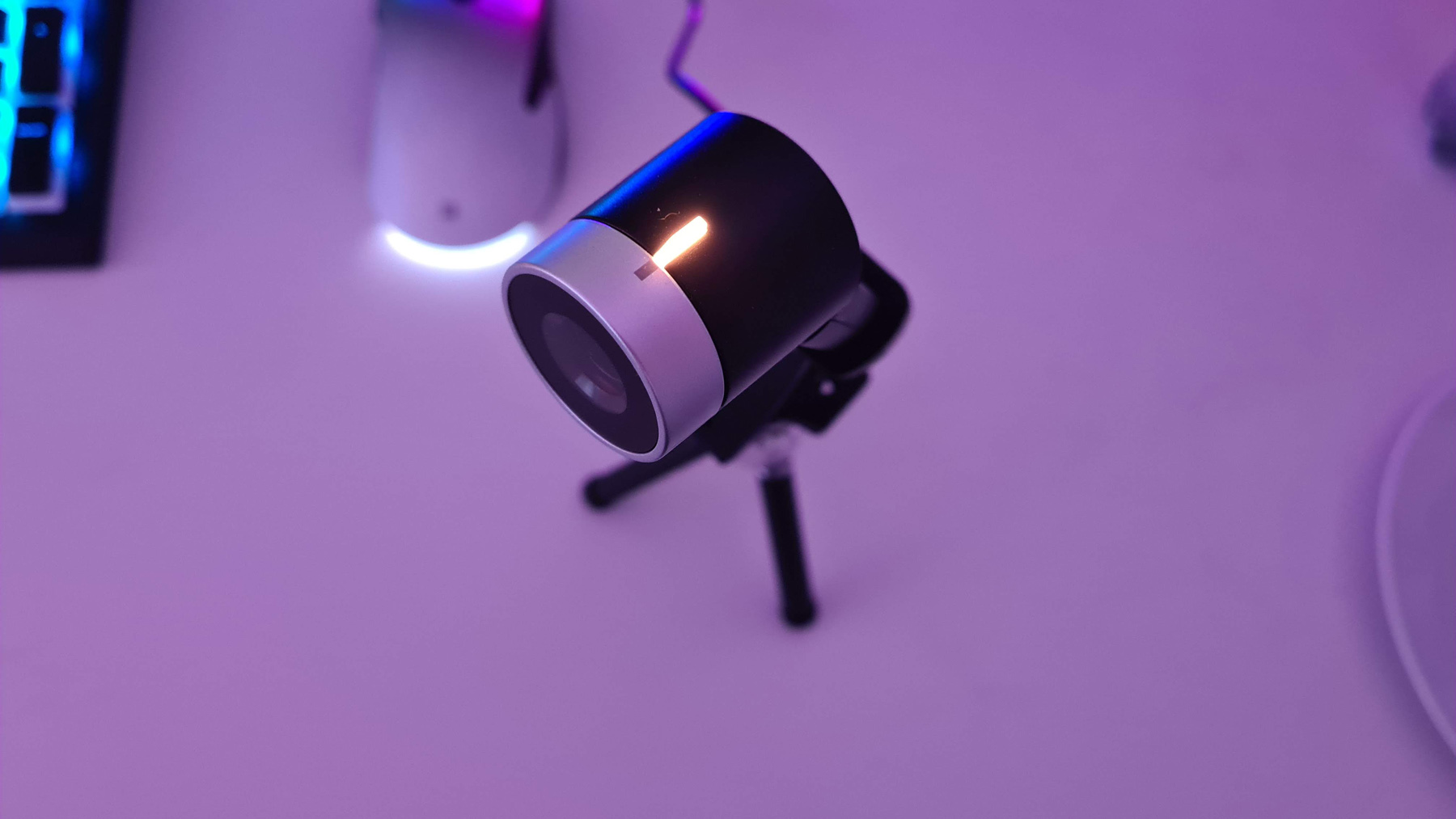 It is important to know what you’re buying with this webcam. It does not have an any microphone, or speakers, so this Poly are really expecting you to be using a headset and to be honest, I’m not concerned by that.

The goal of the webcam is to enable you to have online meetings, the experience of which, will always be enhanced by having the microphone nice and close to your mouth and the audio isolated (as it is with headphones).

Webcams with microphones and speakers built in, often do a pretty good job at avoiding the echo cycle, but are definitely prone to ambient audio in the background being picked up easily on the other end of the call. 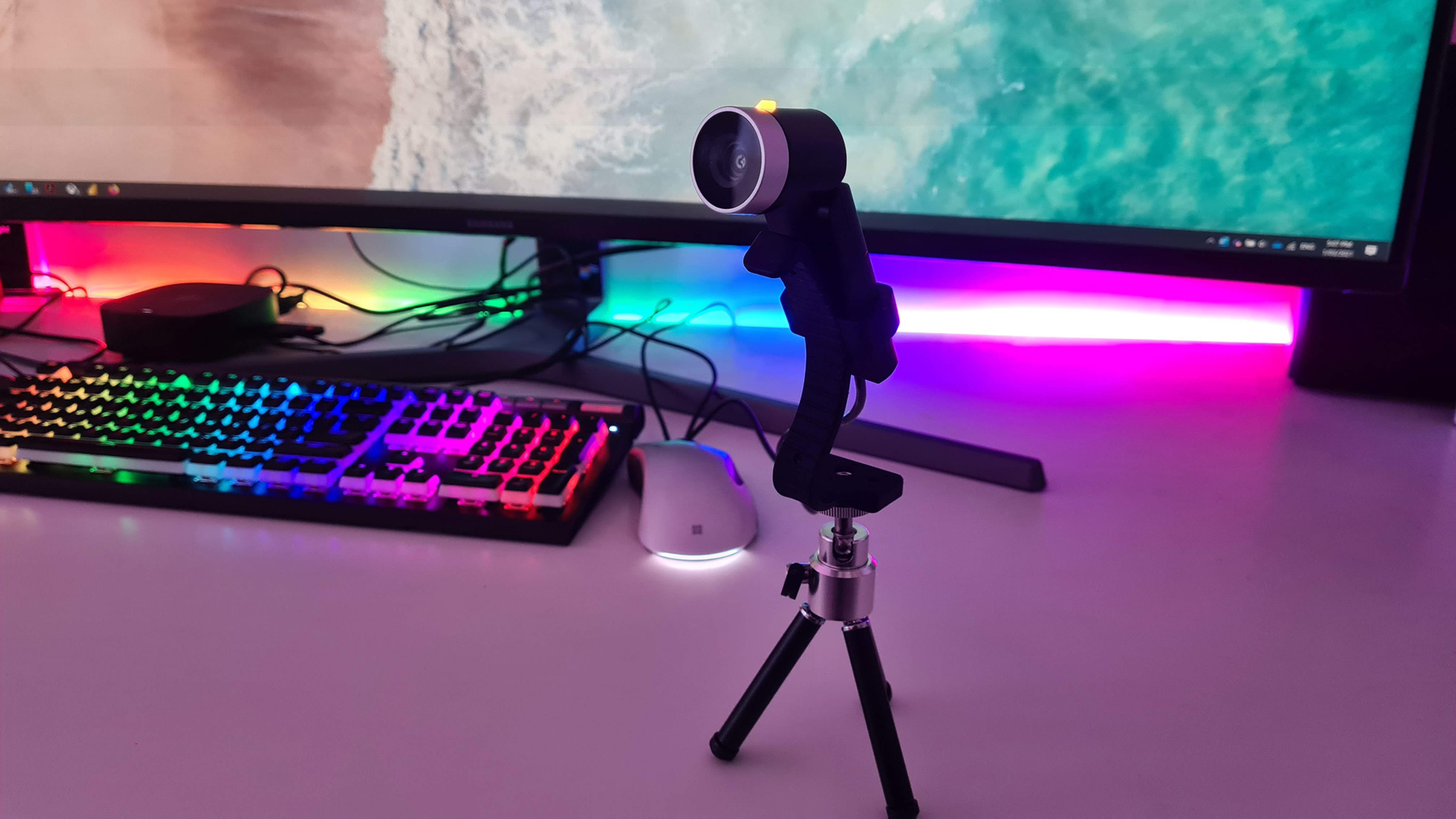 The Poly EagleEye Mini webcam is available now from a variety of online retailers:

For those prices, the webcam is a decent investment, but for a 1080p webcam, it’s pretty much in the ballpark of other popular webcams. Take the Logitech C920 HD Webcam that costs A$179.00 for example.

Depending on what you’re goal is when buying a webcam, it may be worth considering if you’ll be happy with HD quality, or if you should step up to 4K with HDR and Windows Hello support, on something like the Logitech Brio. Naturally this attracts a price premium at A$349.95, making the EagleEye Mini start to look very affordable at almost exactly half that price. 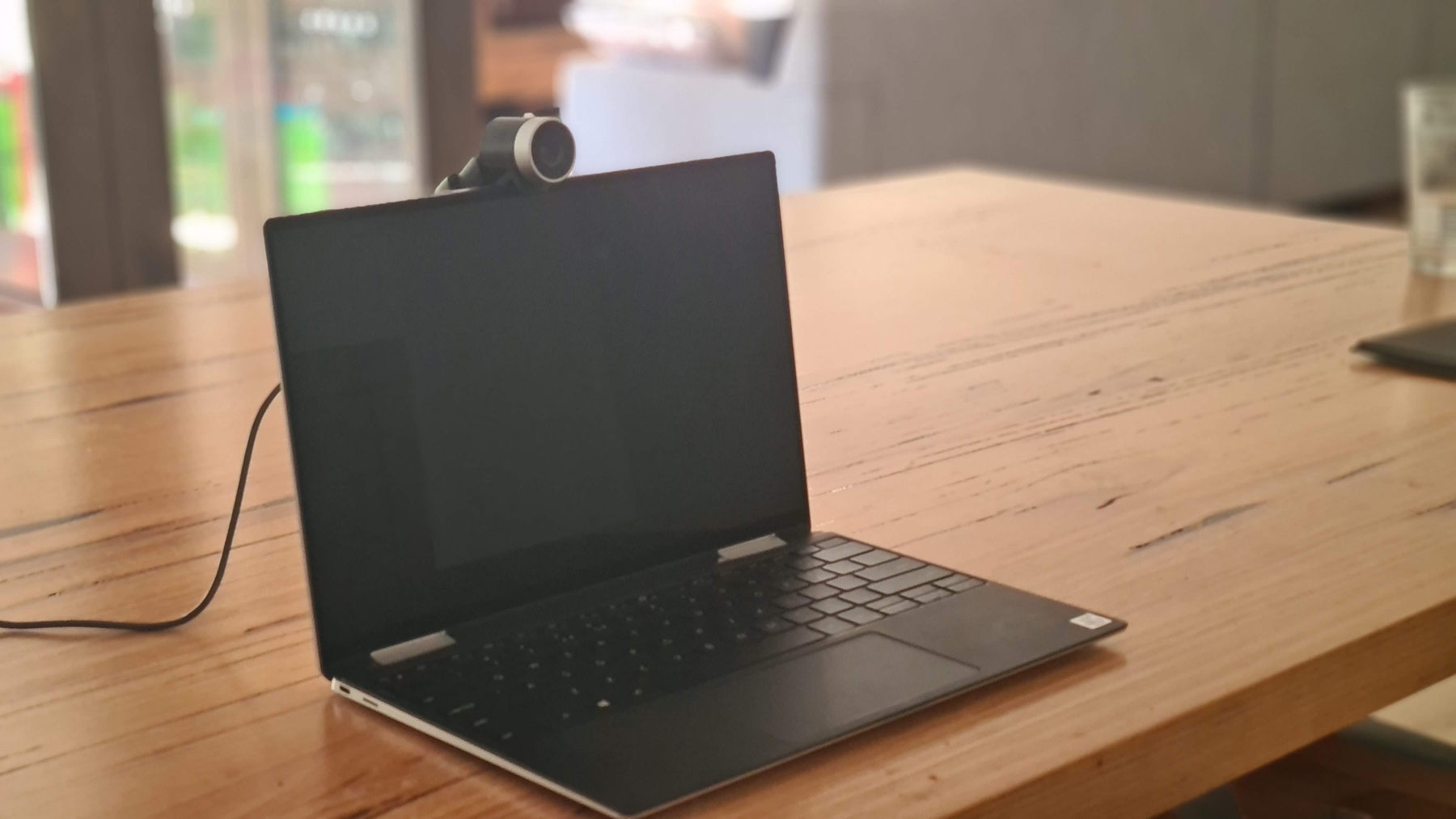 If you’re in the market for a decent 1080p webcam without spending the earth, then this small, but capable webcam is a good option. The lack of speakers or a microphone is something you should be aware of, but not concerned by.

When it comes to the mounting options, I can’t think of another webcam that offers more options out of the box. This ability to be mounted in multiple locations may actually see you move it between locations or devices, rather than buying multiple external webcams.

I’m sure there’s some creative use cases, like using the tripod mount to achieve a top-down desk shot as a source camera fed into OBS streaming software. Whatever your use case, this is definitely a camera worth considering for those PC users who don’t have a webcam, or those looking for a little more quality than what comes inside their laptop.

Jason Cartwrighthttp://techau.com.au/author/jason/
Creator of techAU, Jason has spent the dozen+ years covering technology in Australia and around the world. Bringing a background in multimedia and passion for technology to the job, Cartwright delivers detailed product reviews, event coverage and industry news on a daily basis. Disclaimer: Tesla Shareholder from 20/01/2021
Previous articleReview: Mi Electric Scooter Pro 2: Mercedes AMG Petronas Formula 1 Edition
Next articleTesla’s FSD subscription coming in Q2, 2021 but how much will it cost?