As we moved to thinner and thinner laptops, one of the biggest compromises we had to make was to take smaller capacity hard drives. Now we’re quite a few years into ultrabooks, there’s new storage options like Samsung’s new 1TB M.2 NVMe 970 Evo Plus SSD, which offers not only great capacity, but that size comes with amazing performance.

The first thing to know is that if you already own a 970 EVO, then its time to upgrade, the 970 EVO Plus is powered by Samsung’s latest V-NAND technology and there’s also some fance firmware optimisation that helps it achieve it’s amazing performance.

I had access to a HP Elitebook 1040 G3 which came with a 256GB Sandisk SD8SN8U. A few screws later, and I had the new 1TB Samsung 970 Plus installed and it was time to test. The difference between the two drives was substantial, with all other hardware remaining the same. Before we talk raw numbers, it is important to note that this laptop is over a year old and the best possible speed of the drive could only be acheived with the latest hardware.

With that out of the way, lets talk performance.

The original drive that shipped with the HP ultrabook, acheived a decent, yet not amazing sequential read speed of 466.60MB/s and writes of 168.75 MB/s. These are decent speeds and the laptop doesn’t feel slow, but then I tried the EVO Plus.

It was quickly apparent that the new drive was substantially faster, by many multiples, with the SSD Benchmark registering a 2,508.97 MB/s on sequential writes and a very healthy 1089.78 MB/s for writes. While these numbers are down on the theoretical 3,500/3,300 MB/s, with the newest hardware, I don’t doubt that close to that is possible. That said, I think many people are like me, after a boost to performance and storage amounts in a device they’re otherwise happy with. The good news is, for people in that camp, the bump is significant and easily justifies the investment.

To achieve the performance, Samsung used an advanced nickel-coated controller and heat spreader on the 970 EVO Plus that enables the speed, while maintaining remarkable heat dissipation. The last thing you want it components like the SSD increasing the thermal properties of your ultrabook and then having the performance be throttled, so cooling is important. The Dynamic Thermal Guard automatically monitors and maintains optimal operating temperatures to help minimize performance drops.

With a product with such great performance, it’s important to understand Samsung are backing their engineers with a 5-year limited warranty. This means they rate this particular capacity, the 1TB drive, for and impressive 600 TBW (Terabytes Written). The warranty applies to whichever comes first, the 5 years or the drive being completely written over the equivalent of 600 times. 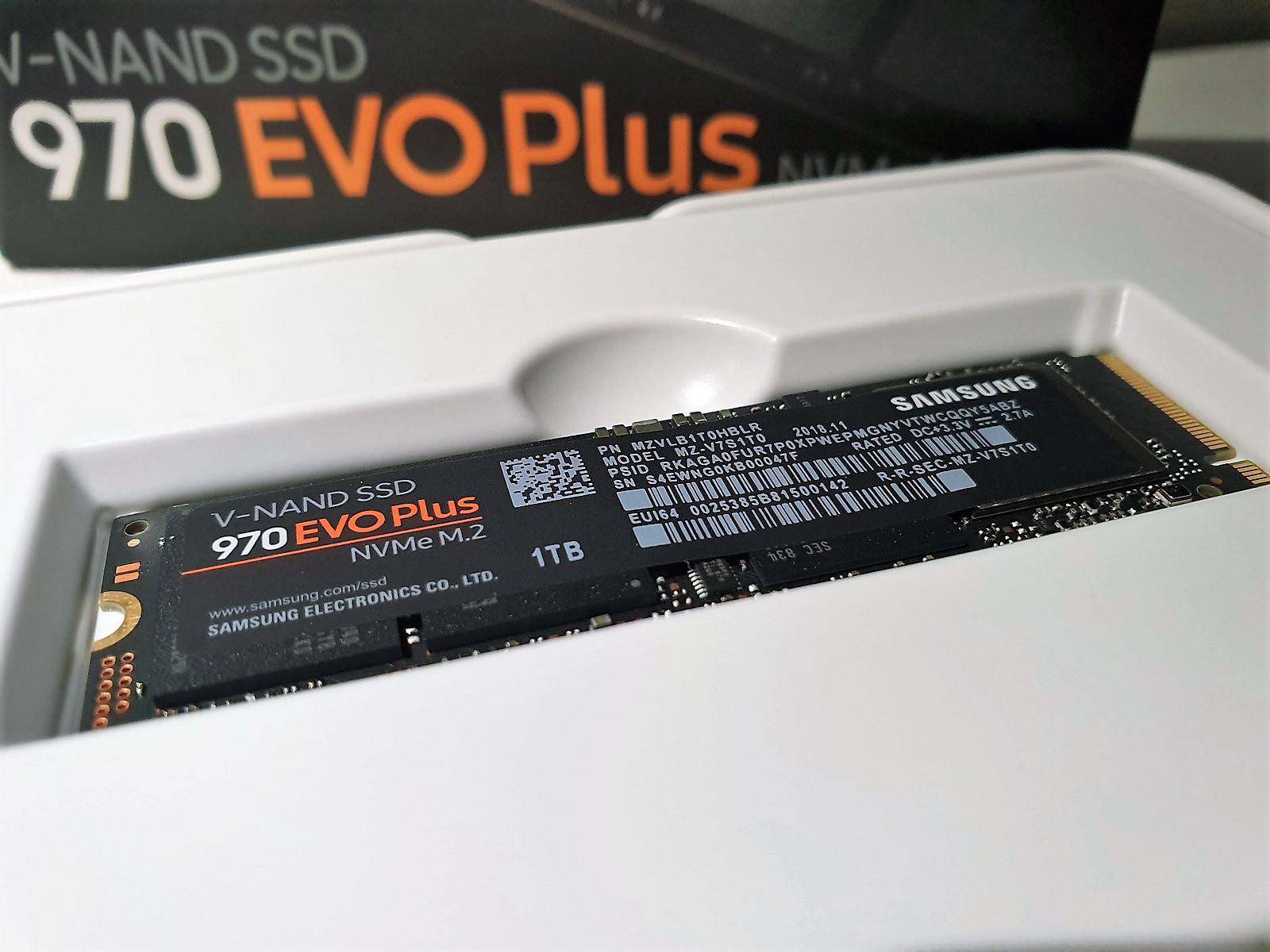 Samsung 1TB M.2 NVMe 970 Evo Plus SSD is avaialble now in a range of storage sizes that’ll suit your budget and needs. These range from 500GB to 2TB in capacity.

The drive is available from the following locations:

Traditionally your cheapest, most effective upgrade for a PC was RAM, but now with most machines shipping with a decent amount of RAM, your hard drive, or rather SSD can often be the bottle neck. The Samsung 1TB M.2 NVMe 970 Evo Plus SSD offers a substantial boost to performance for what is a relatively affordbale upgrade.

The other aspect to it is the simplicity in which this upgrade can occur. Just remove a few screws slide out the old drive and slot in the new one, replace the screews and you’re done. Yes of course there’s the drive setup or cloning you have to take care of, but for the most part, installing the M.2 SSD couldn’t be easier.

It does feel like a bit of a shame you can’t choose SSD’s like this when buying Ultrabooks, instead you pay for the average to good default drive, then have to pay to replace it. Personally I think the 1TB storage size is perfect for modern day computing, especially for those of us who store and transfer 4K footage from phones, GoPros etc.

All things considered, you should definitely consider this upgrade, both if you have a new comptuer and can take advantage of the best in performance, or if your frustrated by a smaller capacity drive. If you have the budget, the 2TB is delivered in the same form factor and is warrantied for double the TBWs of the 1TB model.

Nice work Samsung, fast, affordable, the way technology should be.

Jason Cartwrighthttp://techau.com.au/author/jason/
Creator of techAU, Jason has spent the dozen+ years covering technology in Australia and around the world. Bringing a background in multimedia and passion for technology to the job, Cartwright delivers detailed product reviews, event coverage and industry news on a daily basis. Disclaimer: Tesla Shareholder from 20/01/2021
Previous articleWodonga has one of the fastest EV chargers in the country thanks to Formula E’s ABB
Next articleIn the race to 50% Electric Vehicles, someone actually asked the bloke that makes them