Xanova is a gaming company you may not have heard of, but that doesn’t really matter in a world of purchases from Amazon. What counts is the quality of the product and after using this mechanical keyboard for a couple of weeks, it’s time to run you through what’s good and what’s not so great and ultimately let you know if this should be the next keyboard on your desk. 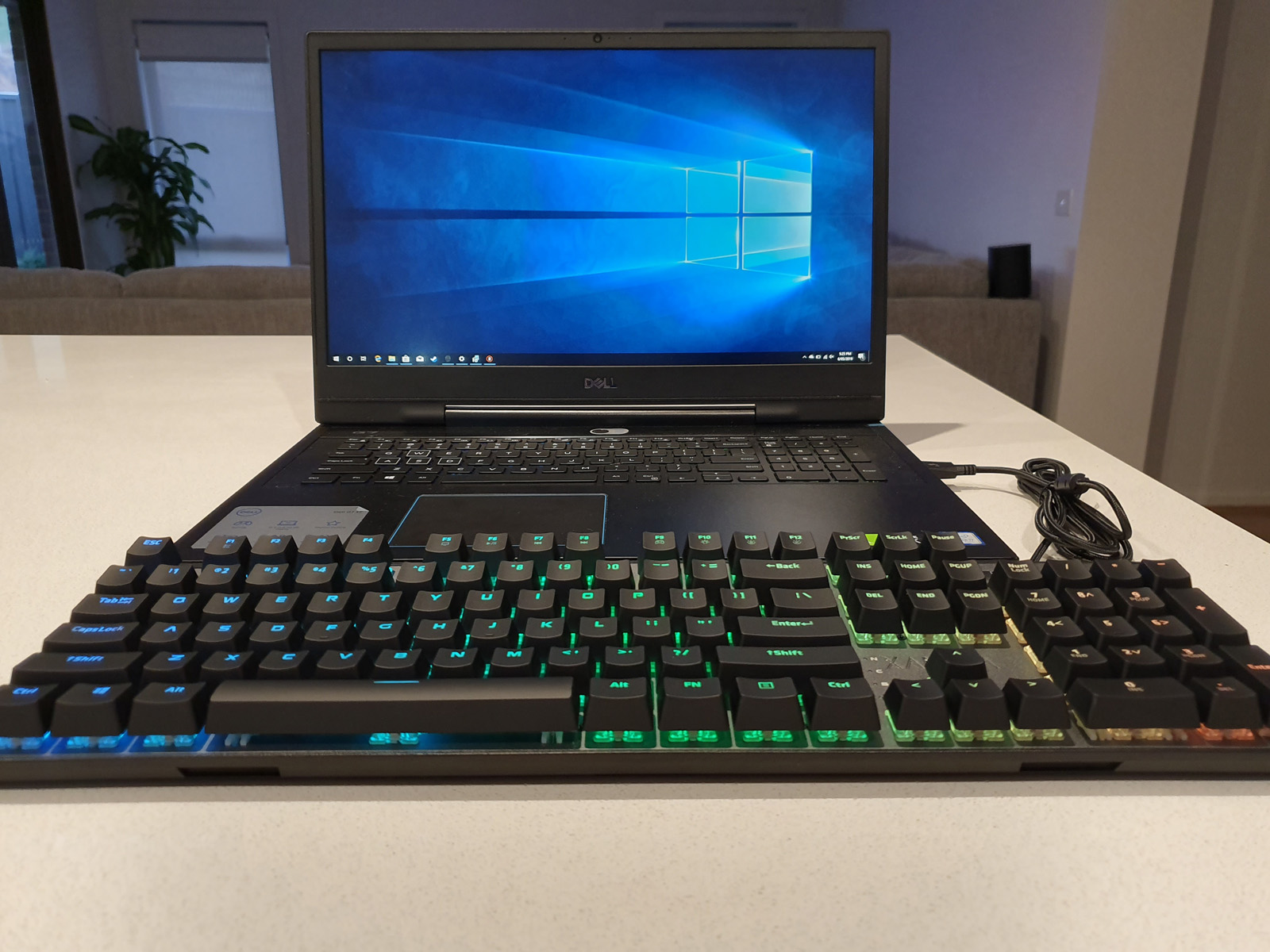 The keyboard is a full 104 key button with an additional 2 buttons to control the lighting and audio, along with a nice volume roller. The colour scheme is a deep grey base and with black keys, with transparent labels which let the colours shine through. The keys themselves sit high about the base, as to let the RBG lighting (16.8 million combinations) flood from beneath each key, while also offering plenty of travel.

Underneath each key lives a Cherry MX blue switch, this is designed to give positive feedback, while having low resistance as you press down upon it. In the head of the battle, you’re likely to be hard on the keys and these are robust enough to take that punishment day in, day out.

The frame is made of anodised aluminium and is therefore fairly light, great for throwing in a backpack for an old-school LAN party, or for your next eSports event. One of my favourite design decisions was to include a generous 1.8m USB cable, meaning you can route it through your desk and to your case easily, even it that case is located on the floor. 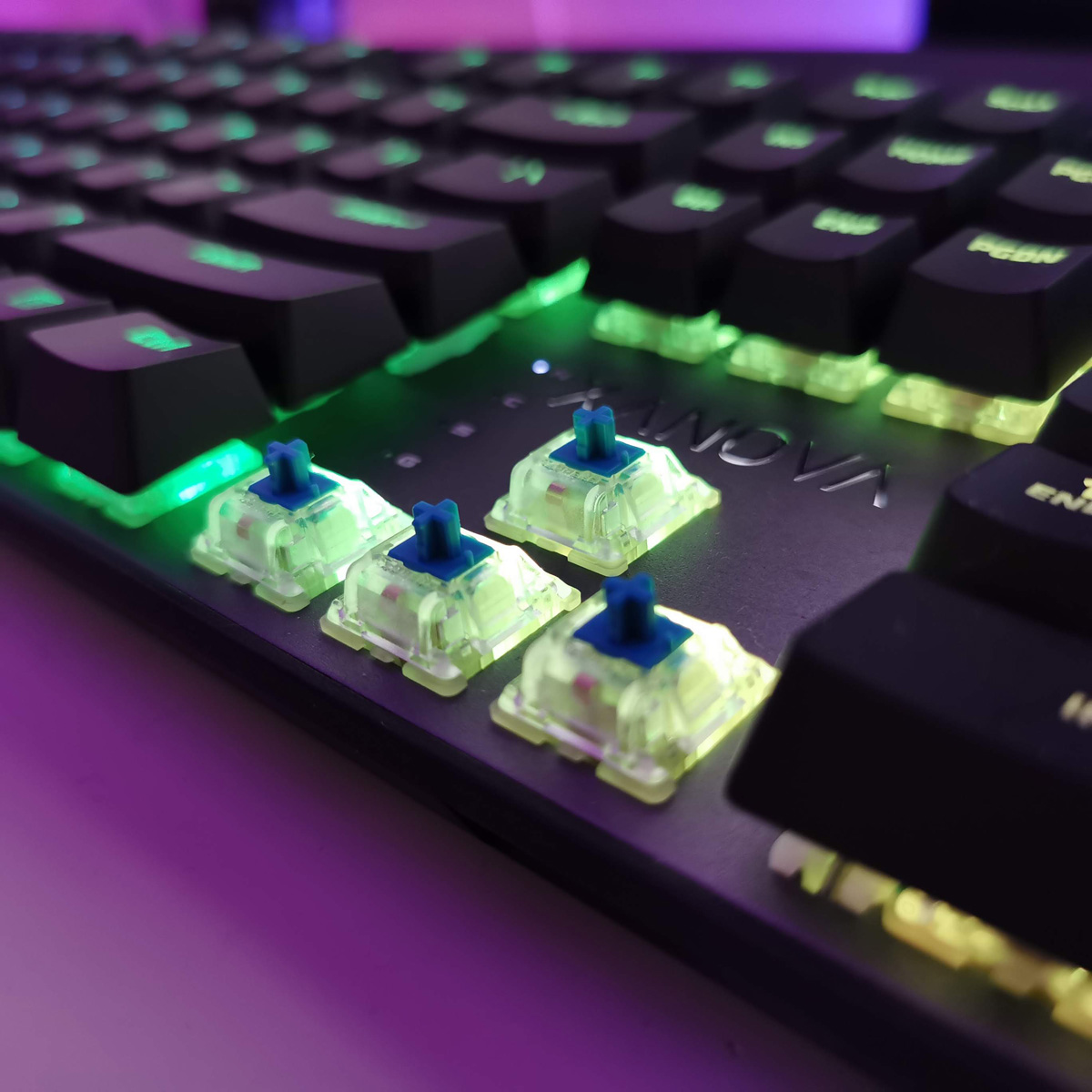 What will it do for you?

This keyboard is fairly light on hardware features, but after you install the Xanova control panel software, the keyboard comes alive. While the RGB lights are active from the moment you plug it in, cycling through the modes is fairly cumbersome using the keyboard shortcuts.

When you bust out the Control panel, you get the ability to remap or even disable keys, but let’s be honest, you’re here for the lighting options. These are divided into 2 sections – backlight and key light. The backlight is where the biggest impact can be customised, the RGB light that glows from below each key has a seriously impressive number of modes.

Lighting effects include modes that animated the lights in any choice of colour, but the most impressive show-off mode is a rainbow effect that flows across the keyboard in a wave effect. There’s also a breathing mode, the ability to cycle through a range of colours. Now for some of the more unique lighting modes.

One that I found to be particularly fun was Starry which looks like a virus has infected your keyboard as individual keys light up in random colours. These light up and fade out gently and to be honest, its kind of mesmerising after a while.

There’s also a scanning mode which wipes left, then right as well as a bubble mode that looks like a series of colour explosions, like someone’s dropping water bombs on your keyboard (this isn’t waterproof, so don’t do that). If you want something a little crazier, there is a fireworks mode which is actually too much for my liking, like fireworks in the sky, their explosions are random and impulsive.

Continuing through the drop down of lighting effects you’ll notice at least a half dozen more modes. Personally, I like a few from the list, but after a couple of days of use, quickly settled on my favourite, the standard rainbow wave. Something you should know is the brightness and speed of the effect is completely customisable, meaning you can set it from anywhere between a nightclub and put me to calming, almost sleep-inducing.

Next is the Key Light section. This basically works in a very similar fashion, just select the mode, colours, brightness and speed. This is all about how the keyboard responds to your inputs. These effects react by lighting the key and surrounding keys, every time you press a key. It’s actually a neat effect and one you can really tweak to your liking.

The final feature in the control panel is EQ. This mode turns your keyboard into a visualizer for the audio going through your PC. It’s a cool feature, neat that this is technically possible, but not something I liked enough to leave on for longer than a quick test.

Should you ever need to quickly disable the RGB, like if you’re watching a movie and don’t want to be distracted, then you can simply double-press on the hardware lighting button in the top-right. The roller plays 2 functions, it can increase and decrease volume, or increase and decrease the lighting level dependant on which button you last pressed.

The keyboard also ships with a foam padded wrist rest. Personally, I’ve never found they work well for me, but that’s up to the individual, it’s soft and comfortable for the short time I tried it. I also like a clean desk, so this is an unnecessary addition I chose to discard. 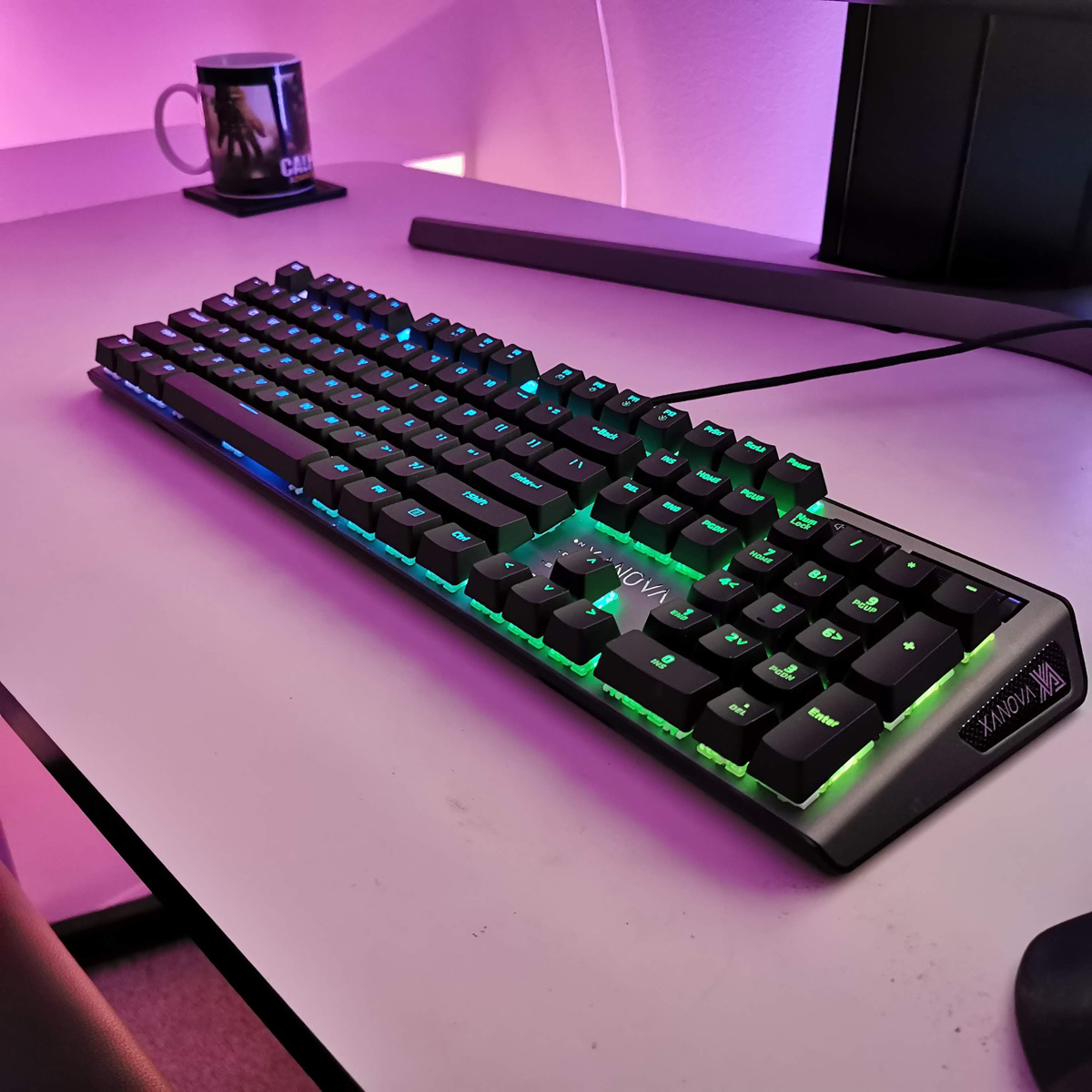 My criticisms of this keyboard are quite simple.. it’s too loud. I posted a video of it being used online and quickly was met with comments about being physically hurt if I was sitting next to people and typing on this. That’s a completely valid point, it’s crazy loud to type on. That’s often a criticism of many mechanical keyboards as they aim to give users great physical feedback from each key press. The difference here is they’ve tripped over some natural limit of acceptability and venture far into the typewriter realm.

The keys sit high above the keyboard chassis which does enable plenty of that RGB glow to flood from beneath, but the travel is much further than I prefer. As your finger depresses a key, the cliff up to the next key is dramatic and when you’re a touch typer that slows you down. This means you have a decision to make, choose this keyboard and enjoy the full RGB effect, or type faster on a keyboard with fewer tradeoffs. Personally, I’m someone who writes a lot, some days between 3,000 – 5,000 words, so the speed is critical to me. 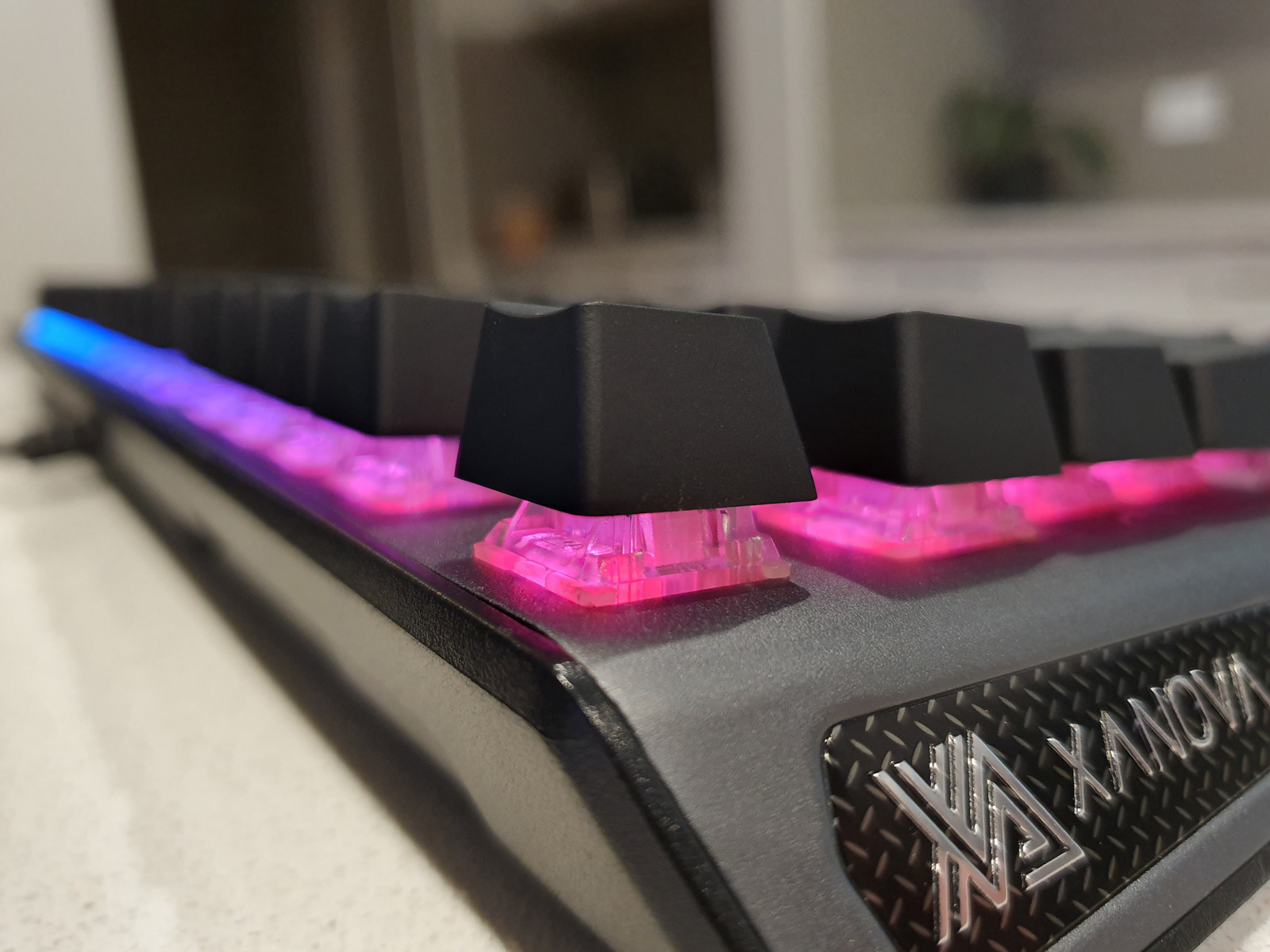 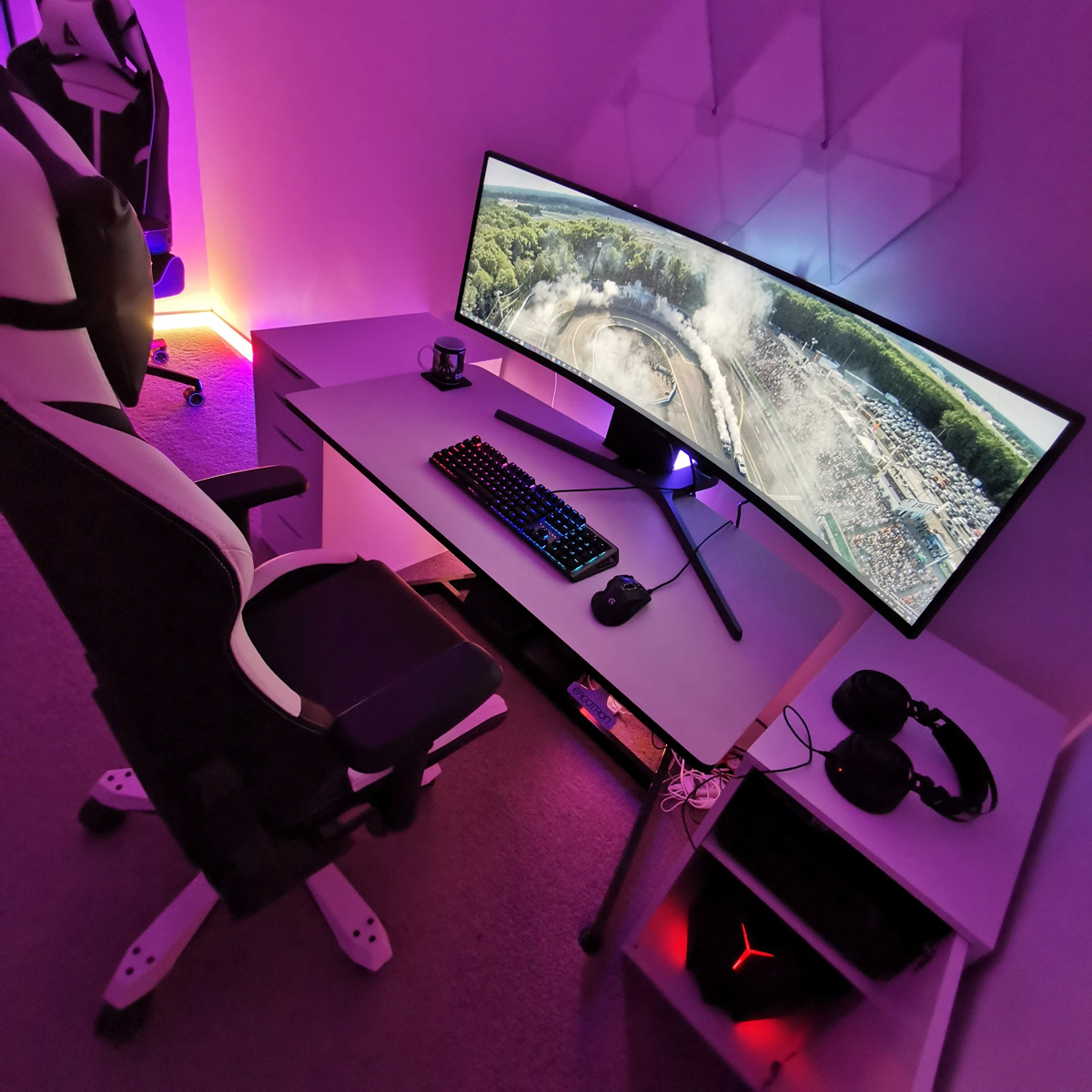 All things considered, this keyboard is a great solution for those looking for a little more RGB in their battlestations. While some go with a plan keyboard and a subtle edge-lit ultrawide mat for their keybaord and mouse (Razer-style), others want a more in your face solution with loads of options. Its that second piece where this keyboard really excels.

When I first went through the software combinations, it really was stunning just how much personalisation was available here. Xanova has done a great job on the software and it’s certainly a design that’ll make your Instagram friends jealous. If you decide to buy another Xanova product like headphones, the same software control panel will also enable you to customise the lighting on that.

In reality, you probably need to live by yourself if you want to use this keyboard. I’m not joking when I say this thing is crazy loud, something I think could have been easily softened had they chosen a different key mechanism. Smashing the keys is very rewarding, but the amount of travel (almost the height of the key, means you’ll be moving your finger further for every keystroke. If you’re just using this purely for gaming, then you won’t care as you’ll barely move off WASD, but for those looking for a perfect keyboard that looks great and works great, I suggest this keyboard may have a challenging time fitting your lifestyle.

Jason Cartwrighthttp://techau.com.au/author/jason/
Creator of techAU, Jason has spent the dozen+ years covering technology in Australia and around the world. Bringing a background in multimedia and passion for technology to the job, Cartwright delivers detailed product reviews, event coverage and industry news on a daily basis. Disclaimer: Tesla Shareholder from 20/01/2021
Previous articleHuawei is basically out of action with Google, Intel, Qualcomm and Broadcom ending supply
Next articleCoder Academy says every company needs a hacker