Chances are you have heard of Amazon’s Echo products and there’s a fair chance you may even have one in your home. Voice assistants are now a very well established category and they offer hands-free access to information and entertainment.

Over the last few years, I’ve accumulated Echo dots for almost every room of our house. These span multiple versions and the Echo dot is now in its 4th iteration and is a really refined product, one that often finds itself on sale and at a price point that’s hard to ignore.

The 4th generation Echo and Echo dot make a big directional change in terms of design, gone is the hockey-puck design, replaced by a more friendly sphere.

Amazon has evolved these electronic devices over the years, into something more friendly, more aesthetically pleasing when laying around your home. Gone is the hard plastic surfaces, instead replaced by a fabric exterior, which make it integrate far better into you’re home. In the living room, this fabric exterior plays well with the couch, but place them on your bedside table and it works well with the fabrics from your bed.

The past couple of weeks I’ve spent time with both the 4th generation Echo dot and the big brother, the Echo which features a larger design, housing better quality speaker, but does drop the clock which I really love on the newest Echo dot. 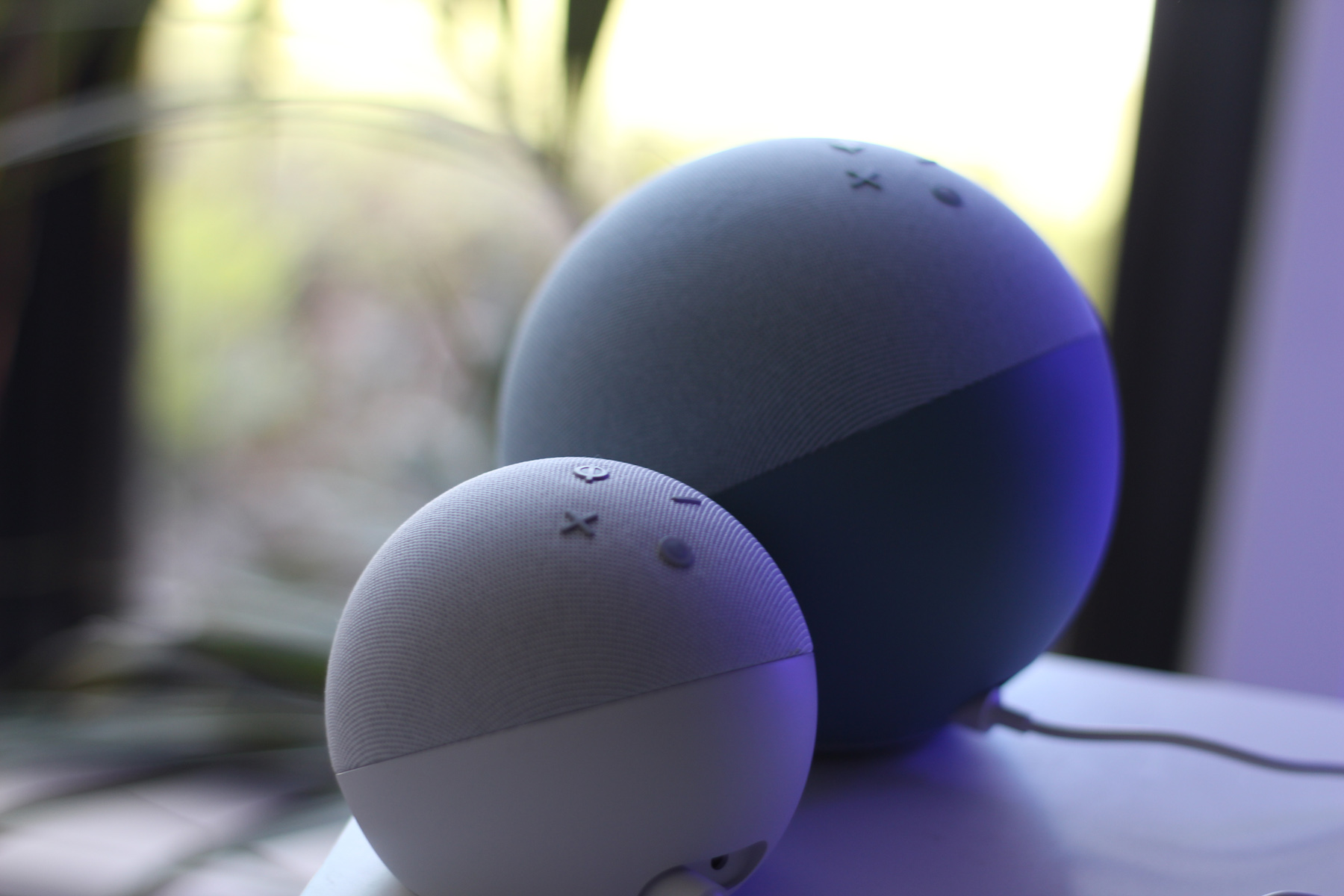 Let me start by saying I love the new spherical design of Amazon’s Echo and Echo dot devices. They just look more approachable (not that you need to), more friendly and interesting than the previous versions. While Echo’s have had a number of revisions, this is easily their best design yet.

The new look on the exterior hides the design changes on the inside. There’s a new sound, with the Echo offering great audio, far surpassing what you’d expect from a device this size.

There’s really well-defined highs, great mid-tones, and a surprising amount of bass. Amazon has leveraged the in-built microphones that allow you to yell at it from across the room, to also automatically calibrate the sound to the room you place it in.

With the new Dot, there’s a clock now integrated into the device, making it a great option for your bedside table. It’s easy to set an alarm to wake you up in the morning and you can terminate that alarm either by voice or reaching over to tap the hardware buttons on the device.

In terms of the light interface, Echo’s are really well known for their blue light ring that surrounds the top edge of the device. Given that’s gone in the updated design, Amazon has shifted this to the base of the device which produces a very cool effect of reflecting off the surface you have it placed on.

Both the Echo and Echo dot are available in 3 colours, Charcoal, Glacier White and Twilight Blue. 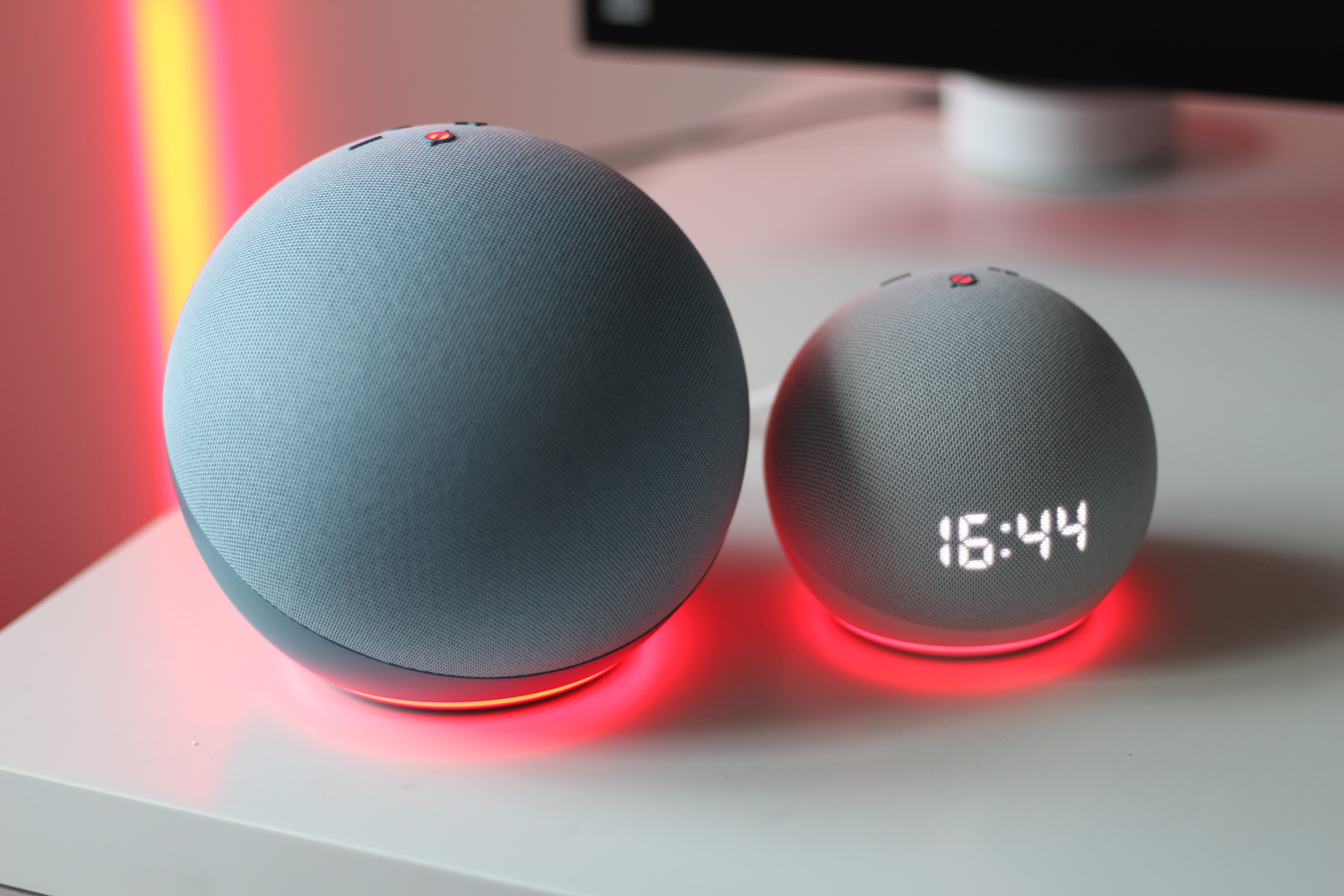 This year’s Echo dots features build on what was already a great offering.  The biggest feature and reason you buy an Echo device, is the voice control. These devices may be small, but when it comes to their capability, they pack a real punch.

Being a connected IoT device, the Echo enables you to send commands via your voice, in natural language, and have the device respond. One of the best use cases is to fill your room, or your house, with music. While the Echo is an Amazon device, I applaud them in supporting 3rd party subscription services. You can stream songs from Amazon Music, Apple Music, Spotify, iHeartRadio and more. You can also listen to radio stations, or my favourite – podcasts, as well as Audible audiobooks.

Some other great features are: 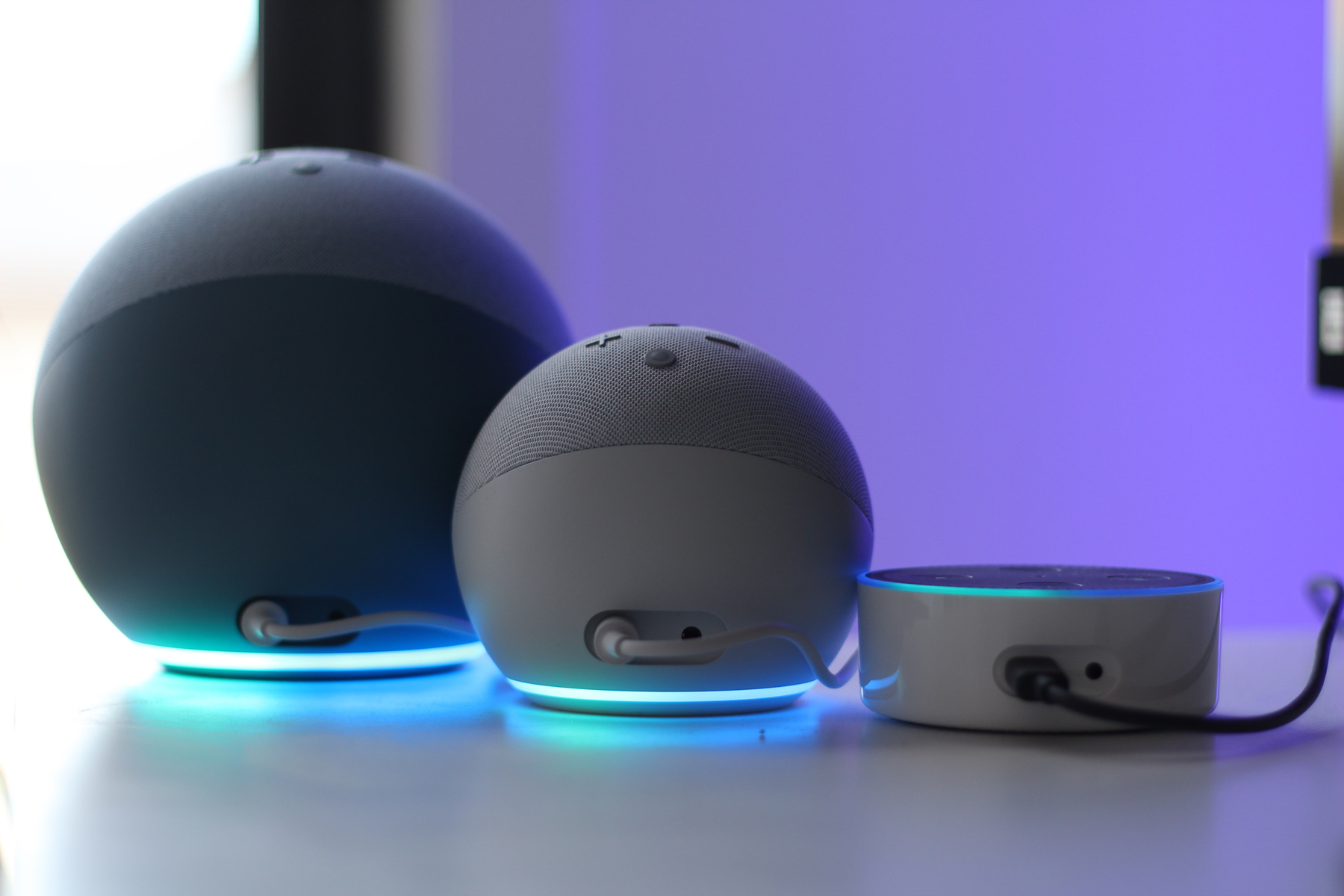 After having used and enjoyed the Echo Dot with the built-in clock, it’s a little hard to understand why the clock didn’t make it into the larger, more expensive Echo. Typically this would offer a superset of the Dot’s features, making the increased speaker qualities the key differentiation.

The way the products are positioned currently, users may need to sacrifice the sound quality to get the clock feature, particularly when seeking a bedside, or kitchen bench solution.

Probably my only other gripe is on behalf of those who invested in wall holders for their Echo Dots. Moving to this new design certainly makes them redundant as you could never discreetly tuck this away next to a powerpoint. 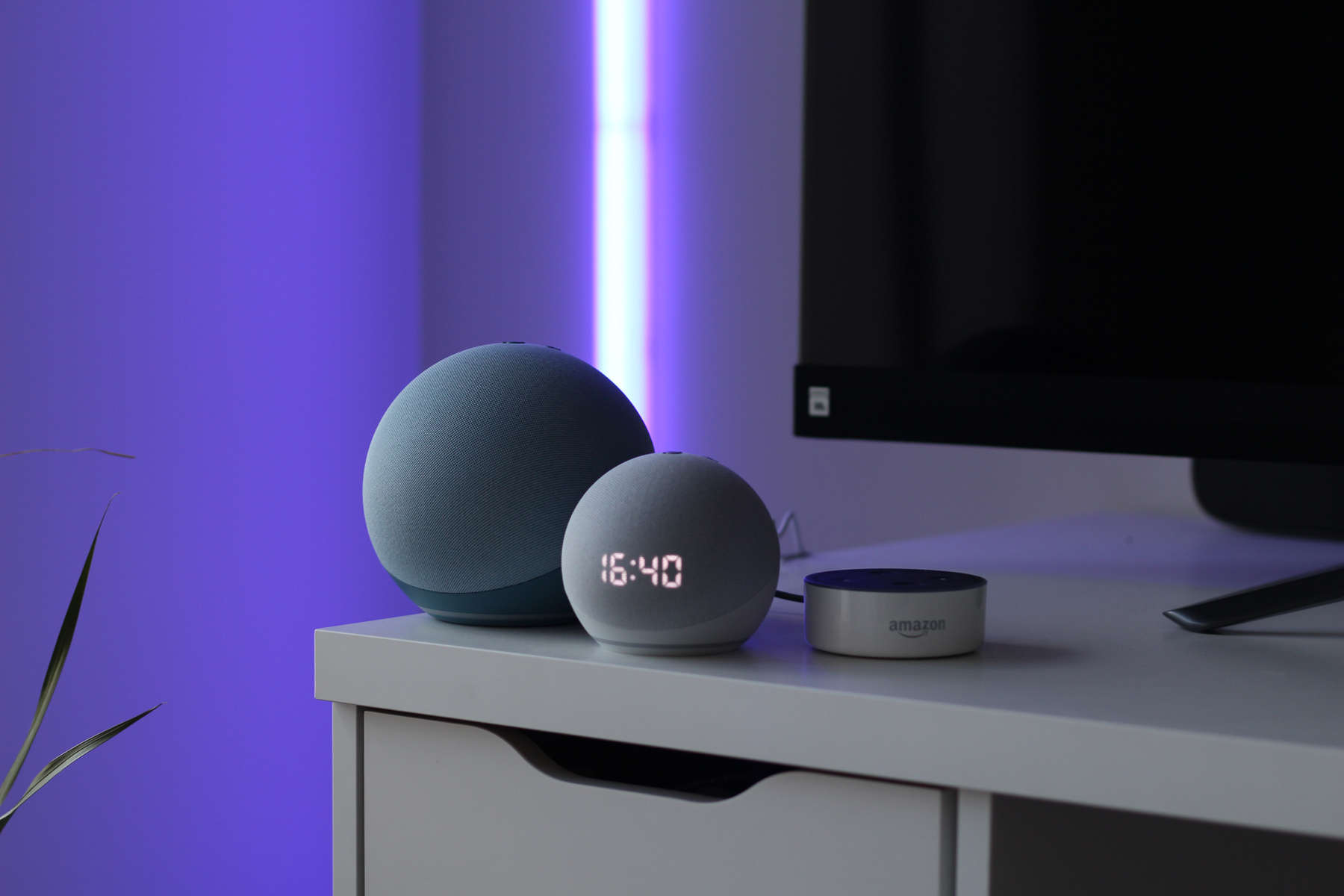 To explain the price difference between the Echo dot and larger Echo, here’s a quick summary of the feature differences. 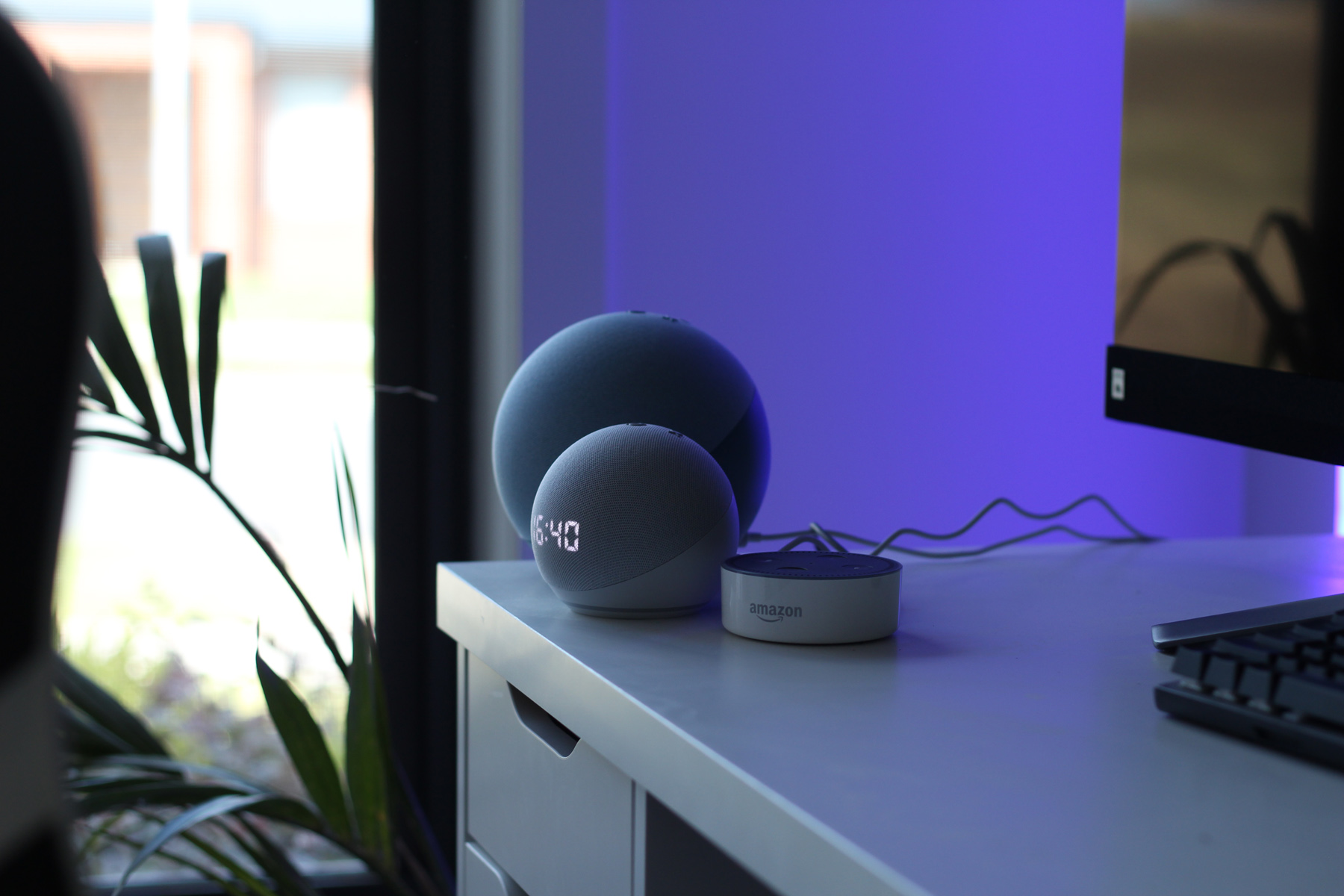 Overall both of the new round Echo devices offer a great lineup of features that should definitely make you consider them as part of your own Christmas list, or as a gift for a loved one.

Whenever Amazon hold events, we regularly see discounts on Echo devices, so pay attention in the leadup to Christmas and you may be able to snag a bargain.

Jason Cartwrighthttp://techau.com.au/author/jason/
Creator of techAU, Jason has spent the dozen+ years covering technology in Australia and around the world. Bringing a background in multimedia and passion for technology to the job, Cartwright delivers detailed product reviews, event coverage and industry news on a daily basis. Disclaimer: Tesla Shareholder from 20/01/2021
Previous articleNew 2021 Tesla Model 3 spotted in Australia
Next articleVictoria’s 30-year Infrastructure Strategy includes plan to Accelerate the uptake of EVs