If you’re in the market for a new drone that’s capable of shooting in 4K, but don’t want to spend thousands, then pay attention. The DJI Mini 2 is one of the most versatile drone’s we’ve seen to date, offering a compact, foldable design, incredibly light. Adding to that portability is an ability to shooting really impressive 4K video, all while withstanding some pretty severe winds.

Filming with a drone can often feel rushed, with some offering around 15 minutes of flight time, but DJI have worked their magic here and the Mini 2, gets close to 30 minutes, that’s wild considering the size and weight of it.

On more than one occasion, I ran out of storage before I ran out of battery. Even if you did manage to burn through a full charge, it’s super easy to land, switch out the battery (takes literally a few seconds), then be off flying again.

Possibly the biggest drawcard of this drone is its affordability, but well under a thousand dollars, this really is an approachable drone for a lot of people. With the top of the market, you’ll pay more than double that, and while this doesn’t feature all the smart sensors to protect itself, if you’re careful and pay attention, that’s an easy tradeoff to make. 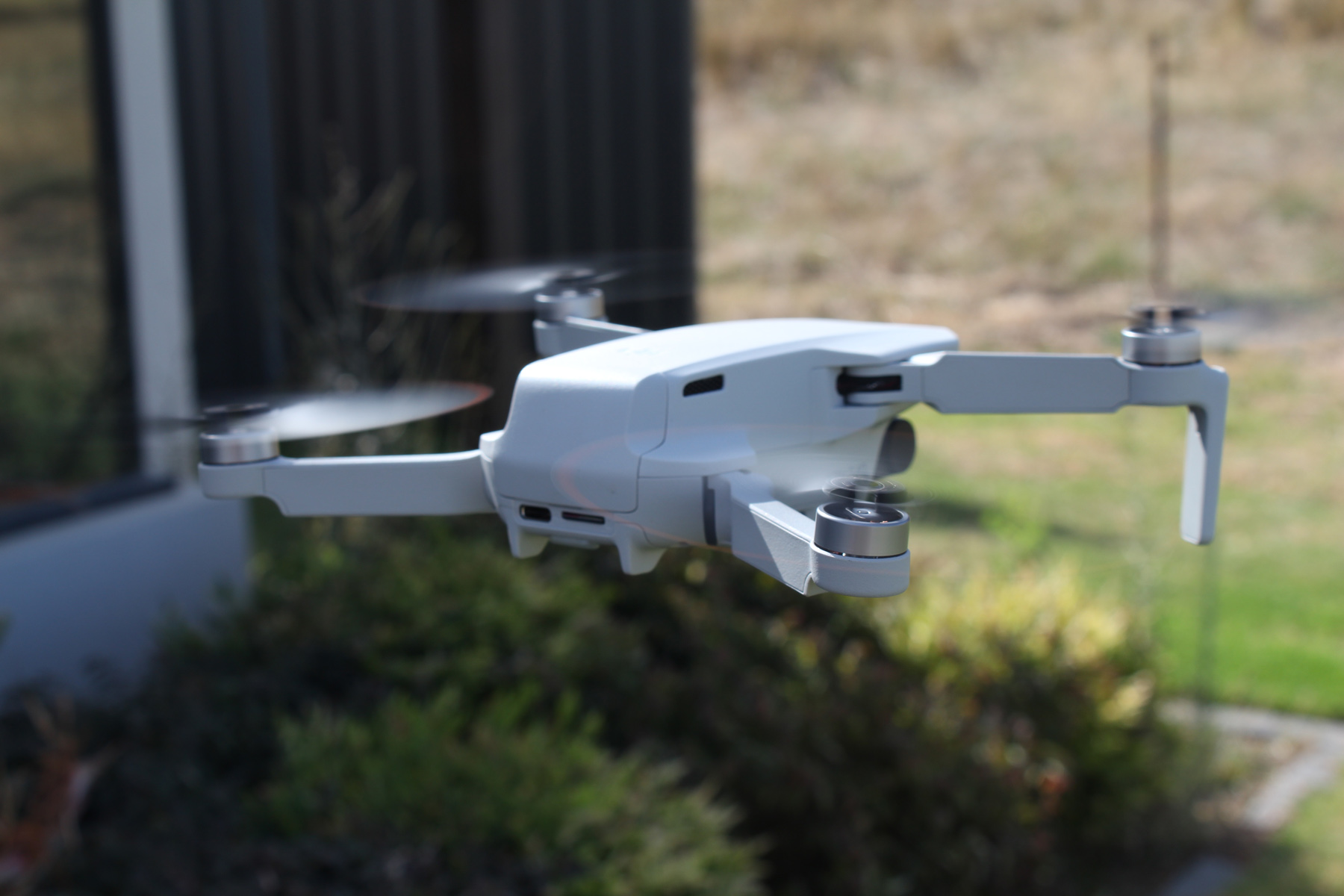 The Mini 2 is a foldable drone. That means when you go to use it, you fold out the 2 front legs (containing the props), then rotate out the 2 rear legs. Even when in the fully extended configuration, this thing is small, not much bigger than my palm.

The reason a foldable drone is so important is that the smaller a drone is, the more likely you are to carry it with you. The more often you have a drone with you, the more able you are to capture the world around you from new and interesting perspectives.

What’s also worth noting is just how robust the folding legs of the drone are. I get the feeling I could fold these out and back in every day of the year for years on end and not have a problem.

What is interesting to note, is the way the props attach to the legs. There are 2 small Phillips-head screws that secure the blades. This differs from some of DJIs larger drones like the Phantom 4, in that they allow you to push down, twist and the prop releases. This makes repairs in the field faster and easier, should you collide with something, but pack a small screw driver in your bag and you’ll be fine.

At this point, it is worth noting that the controller is about the same size as the drone itself, but the shoulder bag included in the bundle is compact and could easily be thrown in a backpack, or travel with you in the car.

The standard weight of the aircraft (including battery, propellers, and a microSD card) is 242 grams. This means for those adventurous types who like walking, riding or hiking, are able to pack this drone, and would barely notice the extra weight.

Finally, in regards to design, DJI is continuing their fairly understated matte grey finish as the only option. Personally, I would like to see some colour options, at least an all-black variant. 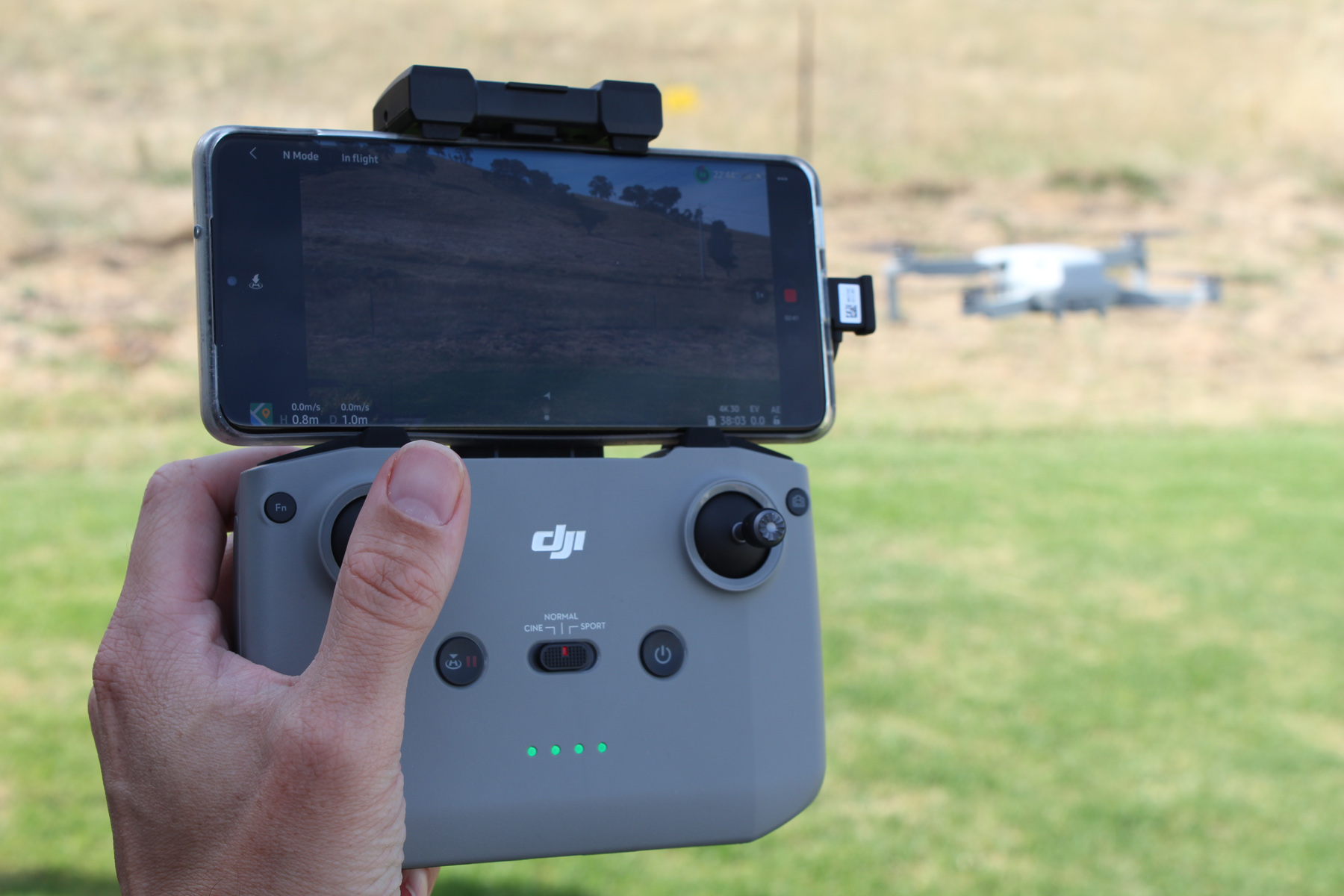 The performance of this drone is measured on a number of categories – battery life, speed and the ability to withstand wind.

When it comes to battery life, the rated number provided by DJI, is a flight time of 31 minutes. Once you adjust for movement, stabilisation (like during wind), the additional energy used by recording, then flight times are really closer to 25 minutes, however, that’s still amazing for a drone of this size.

As far as speed, you’ll choose between 3 flight modes using a hardware switch on the controller. These are Cine (Cinema), Normal, Sport. The fastest of these modes is Sport, at which the Mini 2 can speed to as much as 16 m/s. This is an increase from the 13m/s found on the original Mavic Mini.

During my time with the Mini 2, I flew on plenty of days that were windy. With other drones that have fewer smarts to deal with countering the effects of wind, its easy to arrive at a point where the footage is unusable, even if the drone can stay in the air. After spending time flying the Mini 2 in the wind, its an incredibly capable device, I love how the 3-axis gimbal, allows the camera to continue filming almost unaffected. Naturally, there’s a sensible limit, like in a storm, where you shouldn’t be flying a drone at all, but for most day-to-day use, you’ll be able to enjoy filming. 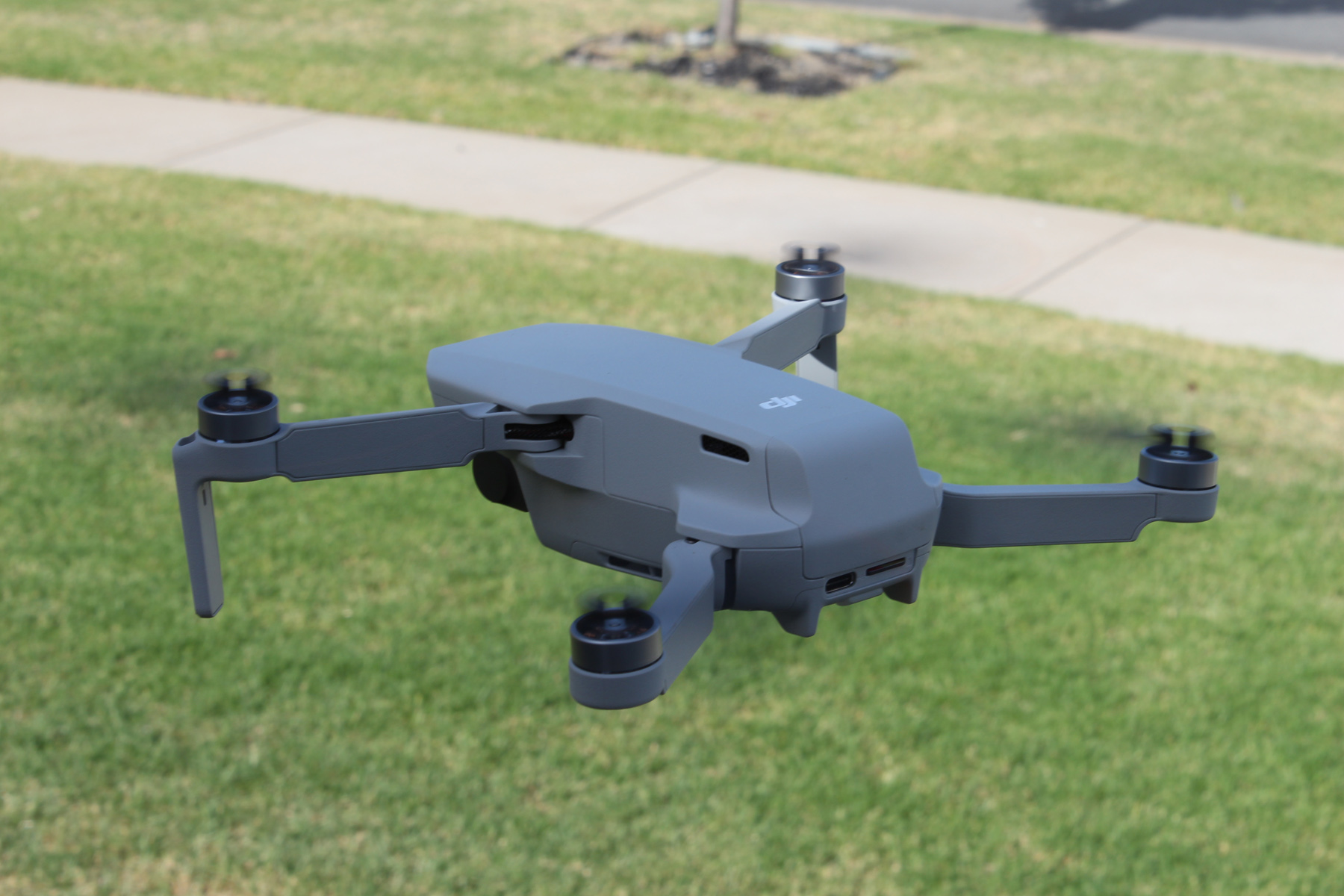 Stand out features of this drone.

Weight
The DJI Mini 2 weighs than 249 g, that’s crazy light, that’s really not far away from the average smartphone weight. Being this light and small (fits in the palm of your hand) it’s just so easy to travel with. This is in dramatic contrast to what taking a drone looked like just a few years ago. The big foam esky of the fixed-wing Phantom now looks almost ridiculous by comparison. Obviously, each has their place, but it’s really hard to go past a folding drone.

Fly from your hand
One neat trick you can do with a drone that fits in your hand, is have that drone take off and land on your hand. When you’re flying on uneven ground, this is actually a great asset to have and anyone who has landed a drone and have it tip over and damage a prop, will absolutely appreciate that.

Battery Life
Small devices typically come with small batteries. When it comes to a drone, you’d think that small battery, would mean you’re really compromised on flight time. Somehow DJI has worked their magic to achieve great battery life on something so small.

The DJI Mini 2 enables flight times of between 25-30 minutes, more than enough time to capture the perfect shot.

Range
The Mini 2 can be controlled from as far as  10 km away and stream that HD video back to the controller. Technically that is an incredible achievement, however, it is worth keeping in mind the CASA regulations that require Australians to keep the line of sight to their drone at all times.

Quality
With a 12MP camera and ability to film at 4K/30fps video the resulting images and video you can capture is seriously impressive. Naturally, a smaller form factor means the image sensor, and optics are smaller than larger, more expensive DJI drones, but for the price point and portability on offer here, the quality is fantastic. You can occasionally run into exposure issues, but as long as you monitor that, you’ll be fine.

Quickshots
Select from Wide-Angle, 180°, and Sphere panoramas, and DJI Mini 2 will do the rest, generating a panoramic masterpiece almost instantly.

Drone to phone
The DJI Fly app features intelligent, built-in photo optimization. The app automatically enhances image quality after downloading a photo, resulting in vivid colours and details that pop. I also enjoyed the ability to download the full quality version of a video, through the DJI Fly app. These can be multiple GB in size, so can take some minutes to transfer. Alternatively, you can pop out the microSD card and transfer it manually.

Trimmed Download
With this new feature, you can easily cut out a segment of your footage to edit and download. Hunting for your favourite shot or worrying about insufficient storage is a thing of the past. 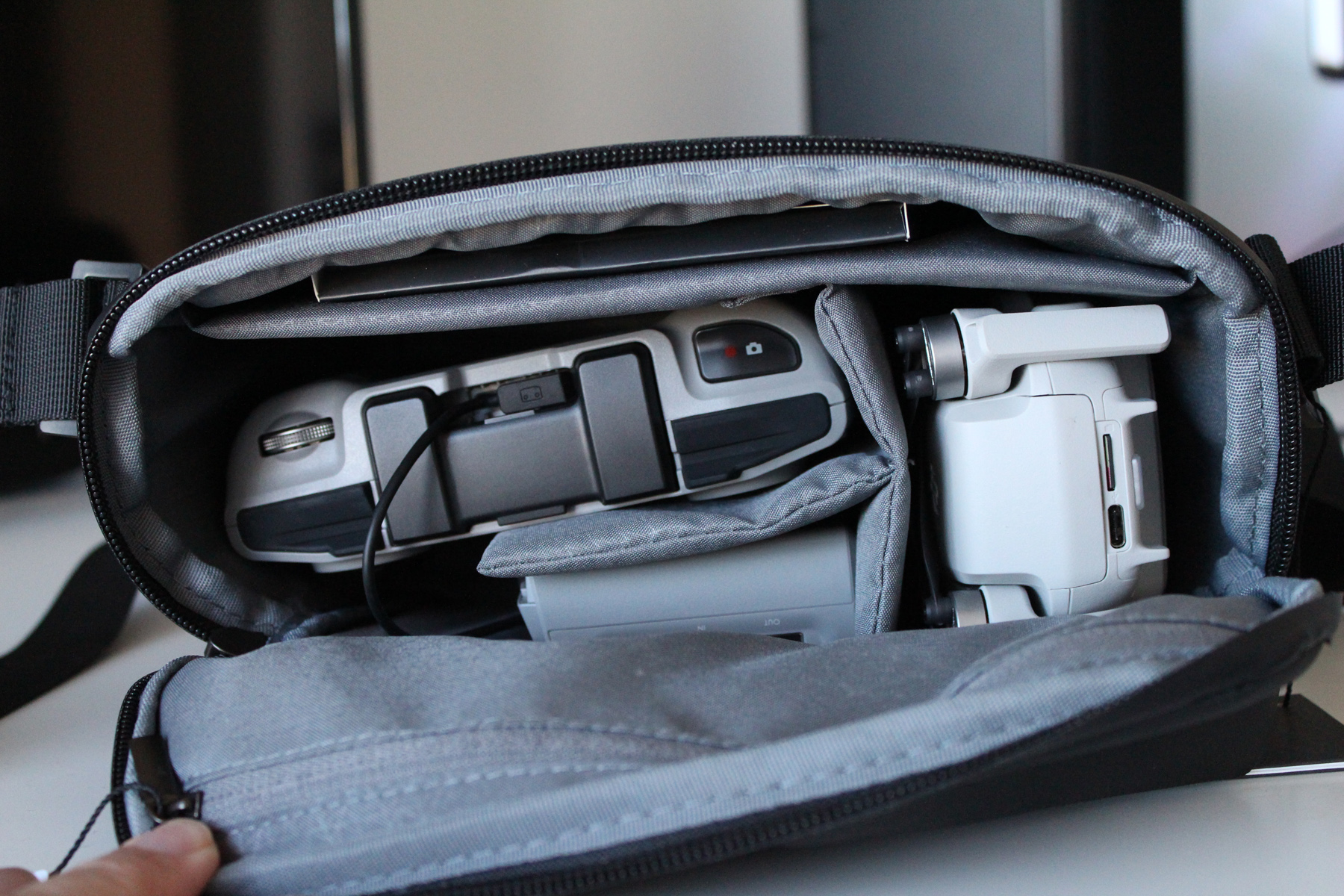 I was a little surprised to see the controller for the drone, being slightly bigger than the drone itself (folded). Once you clip your phone into the holder on top, the whole controller surface is massive, around the same size of the drone unfolded.

Probably my biggest complaint about the controller is the controller doesn’t slide into the bag, without having the control sticks are removed. With a slight change to the padding inside the bag, this would make getting the drone in and out of the bag, so much easier.

Given you’re already unfolding the drone, mounting and connecting your phone to the controller, powering on the drone and controller, launching the DJI Fly app, removing any step (like screwing in the control sticks) would be appreciated. 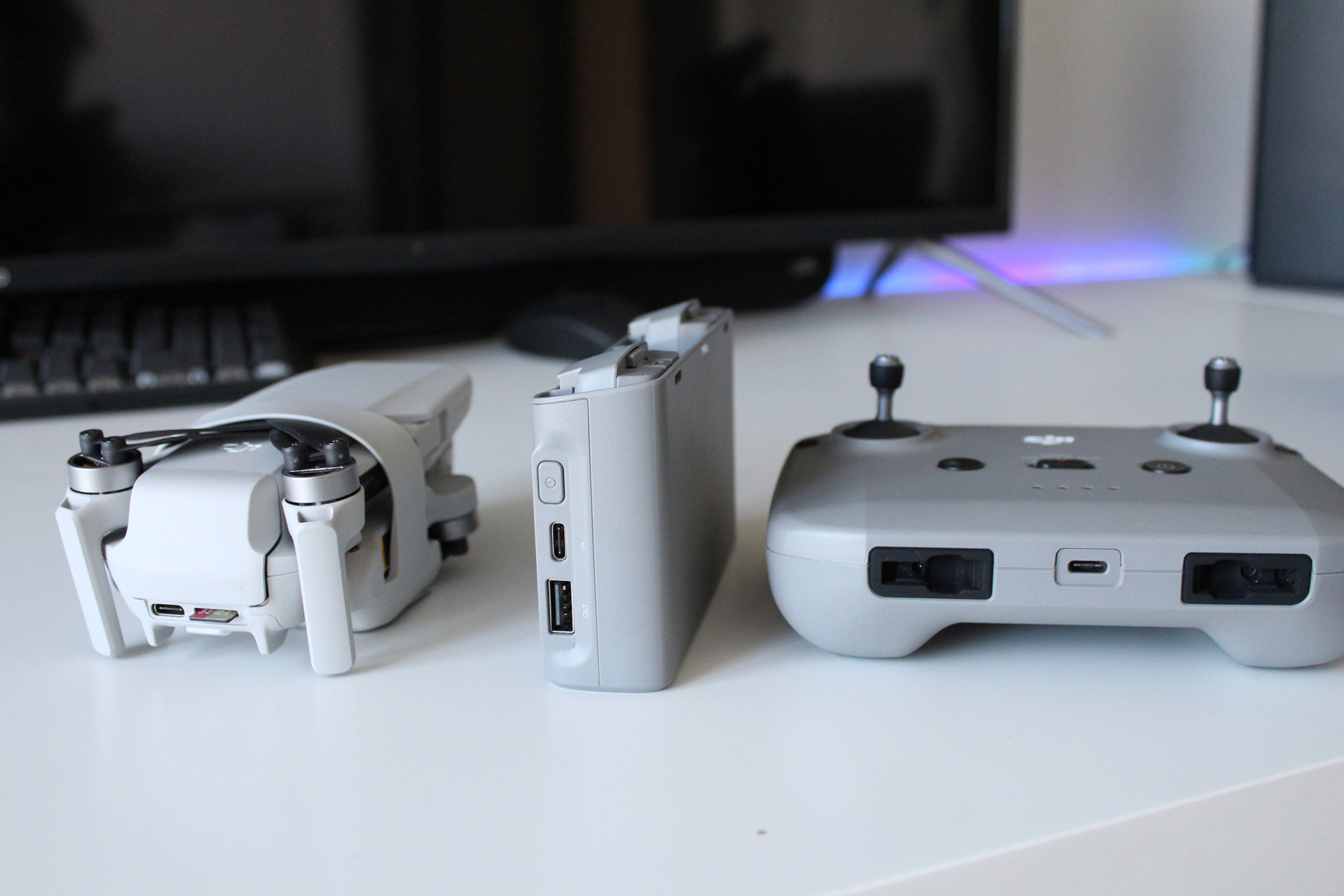 The DJI Mini 2 4K drone is available now from DJI.com directly, or retailers like JB Hi-Fi.

The drone is available by itself, for A$749.00 or as a ‘fly more’ bundle which costs A$949.00. This includes a charging hub, great for up to 3x batteries, an 18W USB charger and Shoulder bag that can fit the drone, controller and batteries. 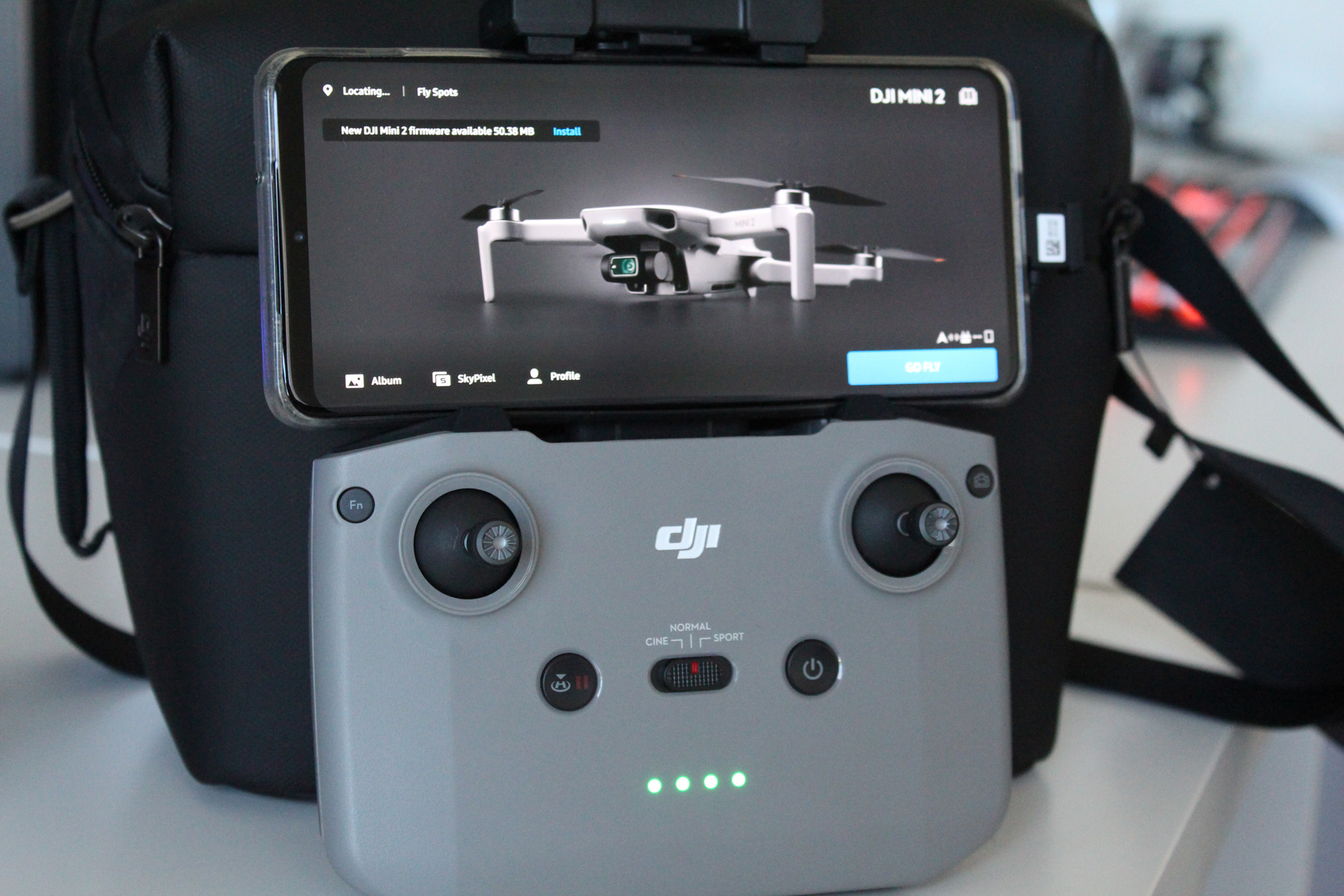 If you’ve held off on buying a drone until now, the Mini 2 would be an incredible place to start. While it does lack some of the smarts of the more advanced models, the price, performance and portability are all real strengths of this drone.

The ability to easily transport this, recharge the controller, batteries and your phone with a single cable (USB-C) was a really great experience. For those of us with USB-ports in the car, it’s entirely possible to store and charge the drone from your car, meaning it literally is with you everywhere you drive.

My criticisms around the controller not fitting in the bag when the sticks are attached is a small area that is hopefully improved in the future, but we’re really talking about a refinement in a product that gets so many things right.

For the price and abilities of the Mini 2, it’s easy to recommend this drone strongly for those getting into the market, or updating from a 3-4-year-old drone that wasn’t 4k capable.

Jason Cartwrighthttp://techau.com.au/author/jason/
Creator of techAU, Jason has spent the dozen+ years covering technology in Australia and around the world. Bringing a background in multimedia and passion for technology to the job, Cartwright delivers detailed product reviews, event coverage and industry news on a daily basis. Disclaimer: Tesla Shareholder from 20/01/2021
Previous articleMusk says Tesla’s Autonomous Full Self-Driving system will be far safer than humans this year (2021)
Next articleLG just announced the world’s first 48-inch bendable OLED display, flat for watching TV, curved while gaming