Samsung release flagship phones every year and in 2019, that means the S10 and S10+ are here. After 10 years of iterating the design and feature set, Samsung have a very mature platform that is a safe bet for those off-contract to upgrade to. As you’d expect there’s upgraded cameras, the processor is faster, there’s more ram and storage, but this year perhaps the biggest change comes in the form of the display.

For the past few years we’ve seen companies iterate on the display design, shrinking the bezels around the screen, to an experience where the display stretches across the entire front surface of the phone. This year, they’ve done it. To achieve that display and deal with last year’s hated notch issue, Samsung punched a hole in the display surface and shoved a couple of front facing cameras in there, with no part of the Android experience expecting those pixels to be missing, it was a bold choice.

After spending time with the device, it’s now time to break it down and let you know if your next phone should be a Samsung Galaxy S10+ 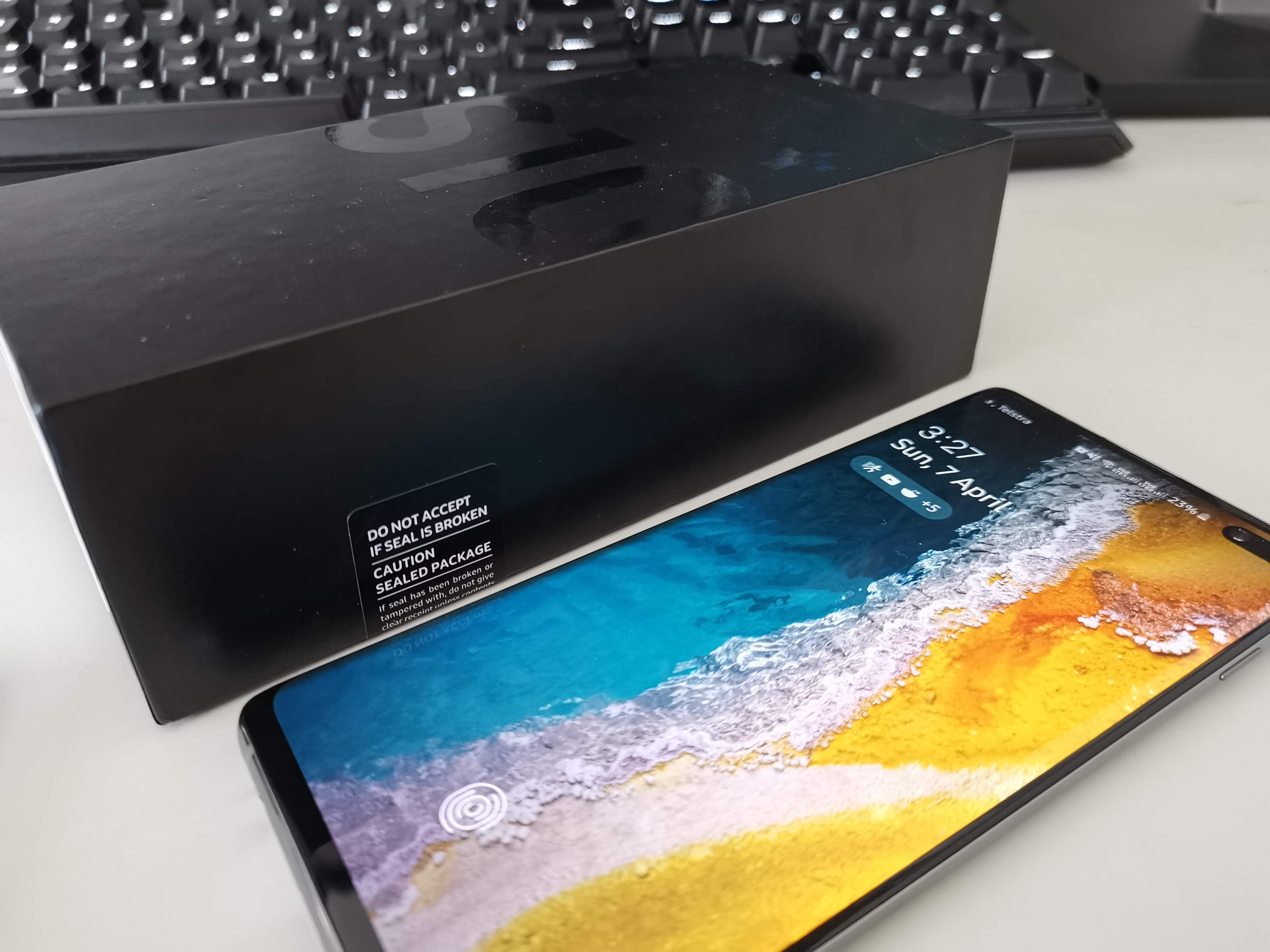 The Galaxy S10+ features a 6.4″ display and is almost identical to the competitors like the Huawei P30 Pro. Personally I love a phone with a large display for the extra screen real estate, especially when sifting through social media feeds, emails or websites, it means less scrolling. If the size is too big for you, the S10 offers a smaller 6.1″ display, while the S10e is smaller again at 5.8″.

This new AMOLED Infinity-O display is extends the entire front of the phone, which looks absolutely amazing offering WQHD+ quality which translates to 3040 x 1440 pixels. The reality is this will require more battery. If you ever need to stretch your battery life and enable Power Saver mode, one of the items it’ll suggest is to reduce the screen resolution to enabled FHD+ which runs 2280 x 1080 which means your phone is being asked to push around 1.9 million pixels less.

The phone comes in a range of colours, each have different storage sizes available which is a strange correlation, so choose wisely. Given the front of the phone is consumed by the display, the colour of your phone is really only about the back of the device, with the edges wrapped in a standard silver mirror finish. Our review unit was the Ceramic Black which as you’d expect is a fingerprint magnet, but that’s hardly new for phones. Personally I love to keep my phones case-free, but if you always protect your investment with a case (smart) then you’ll need a new one to accommodate the horizontal row of camera technology. 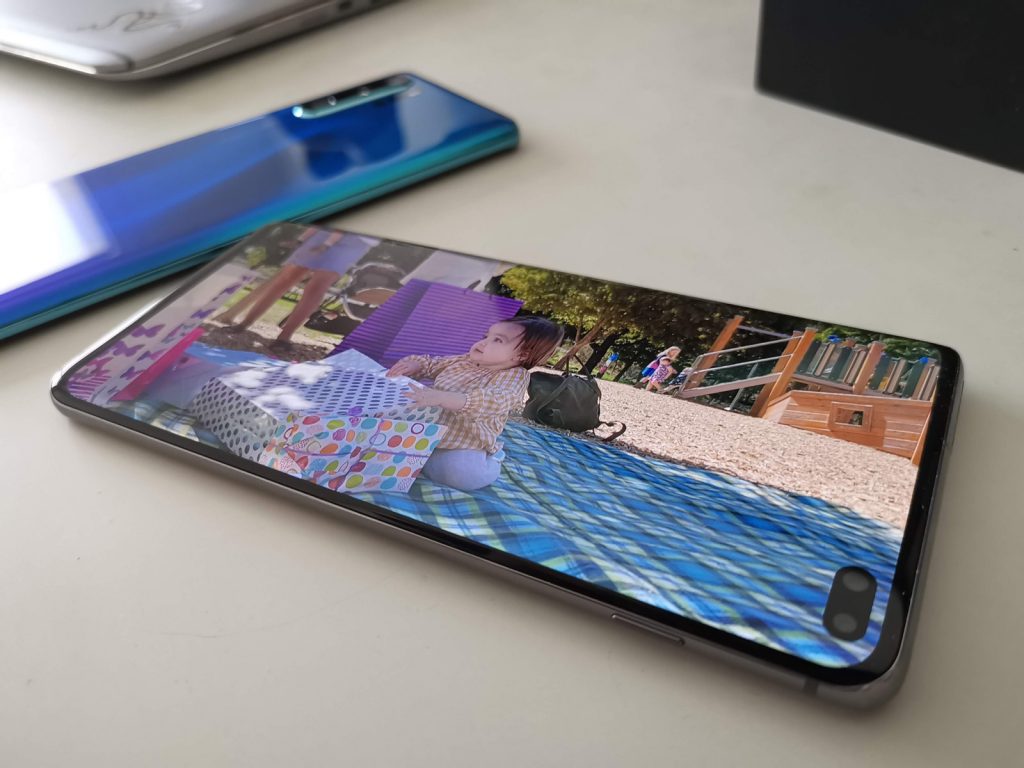 It seems manufactures all have different ideas about the design of the cameras and how they’re arranged. iPhones still use a vertical orientation and Huawei are using a grid, by comparison, I actually quite like the simple elegance of Samsung’s solution.

Gone is any sense of a home button as the device now features a fingerprint reader under the display, also helping achieve the seamless front end. Of course there is one interruption to the glass on the front and that’s the precise laser cut out for the front facing cameras. This is one solution to the notch problem, but I’m not convinced it’s the best.

The button design includes the dedicated Bixby button which Samsung continue to persist with, personally I find Google Assistant still worlds ahead, but Bixby is making progress. I appreciate Samsung let you remap the Bixby hardware button to launch and app or task of your choice, that’s a very user-facing decision, one that came after, let’s say, strong feedback from the community, but hey, they listened.

While I’m using either wireless bluetooth headphones, or USB-C headphones these days, those who miss the 3.5mm audio jack for headphones will appreciate it’s still available in the S10/S10+. The best use case for this seems to be those fringe cases where you need to charge, consuming the USB-C connector, but also want to use wired headphones, having the option is a great inclusion for users. 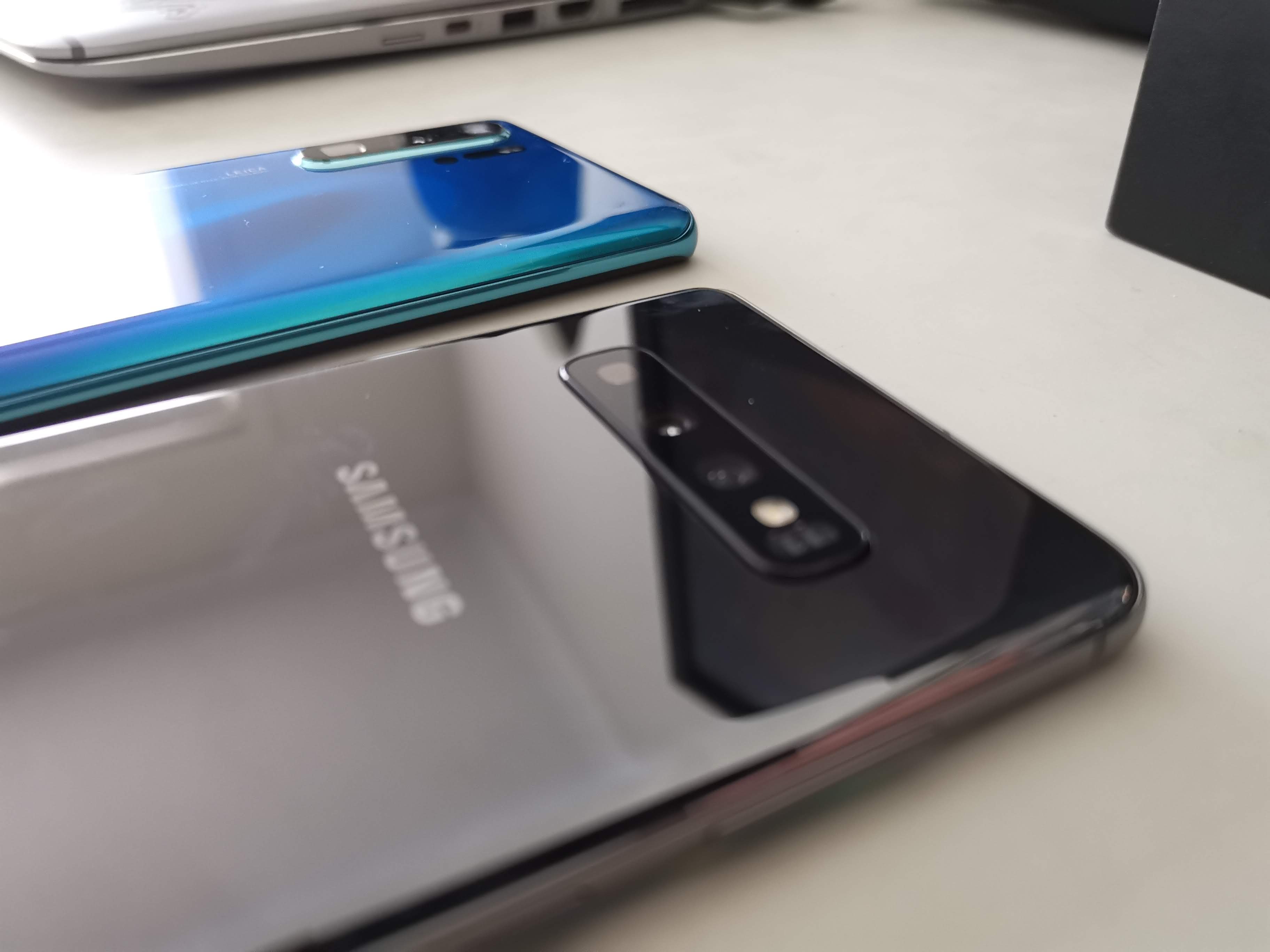 The Galaxy S10+ features are plentiful, which helps justify the growing smartphone prices at the top of the market.

On the back of the S10+ there’s a strip of camera technology. Gone of the days of a single camera (unless you’re Google), instead there’s now a Telephoto Camera, a Wide-angle Lens and Ultrawide Lens. Adding to that is the LED flash which can help photography or just act as a torch.

That ultra-wide camera is now a familiar feature from a smartphone camera and in small spaces, like the inside of a car, it’s a dream. While the lens can distort the final image, it does capture more of what you see from your field of view, so it’s a nice feature to have on hand.

On the front of the device, you’ll find a selfie camera, with a friendly RGB Depth Camera hanging out next to it. The cameras from the front-facing camera were ok, certainly not exceptional, with lighting often overly bright and the photos can lack the detail of the rear cameras.

This year the cameras are using AI to help you select the right camera settings automatically, based on the environment detected in front of the lens. Again this plays catch up to the likes of Huawei who’ve had this AI camera integration for a while now. It works incredibly well with the S10+ and if you are a control freak, it can be disabled, but I found value in leaving it on.

The S10+ features a fingerprint reader built into the front of the display. LIke other recent implementations of this (Huawei had this later last year), you have a single place to press your finger, but it works fairly reliably, but it’s not as fast as face unlock, but is still faster than drawing your security pattern or entering a pin code.

Part of the reason Samsung had to punch a hole in the screen was to house the front facing camera. This is great for selfies, but the far more practical application is to unlock your display just by looking at it. I’ve used plenty of phones with face unlock and the S10+ has one of the fastest, if not the fastest on the market. It also accommodates well for different lighting conditions, if I grow a beard for a few days, if you’re on an angle etc. Given then number of times we unlock our phones each day, ensuring this technology is ultra fast and rock solid is critical to deciding on a phone.

Samsung have dropped a 4100mAh batter in the S10+ and while that’s a healthy sized battery (down from the P30 Pro’s 4200mAh), I haven’t been blown away by the battery life. It’ll get you through the day on moderate use, but the heavy users, like myself, can be looking for a charger in the afternoon. Enable Power Saver mode and the software will suggest a number of things to conserve battery life. One is reduce the display resolution, but others include reducing the performance of the processor to 70%, restricting background data and turning down the display brightness.

These absolutely help to stretch the battery for a few more hours and if you’re not near a charger, then you’ll want to enable it. Even with the restricted display and performance, the phone is actually still a great device to use, it’s just not the brilliant flagship you paid for. I hope Samsung still has some software optimisation to go on the S10+ which has already received 1 update since I got it.

I recently had the chance to travel to Singapore which served as a great opportunity to test the S10+ camera. 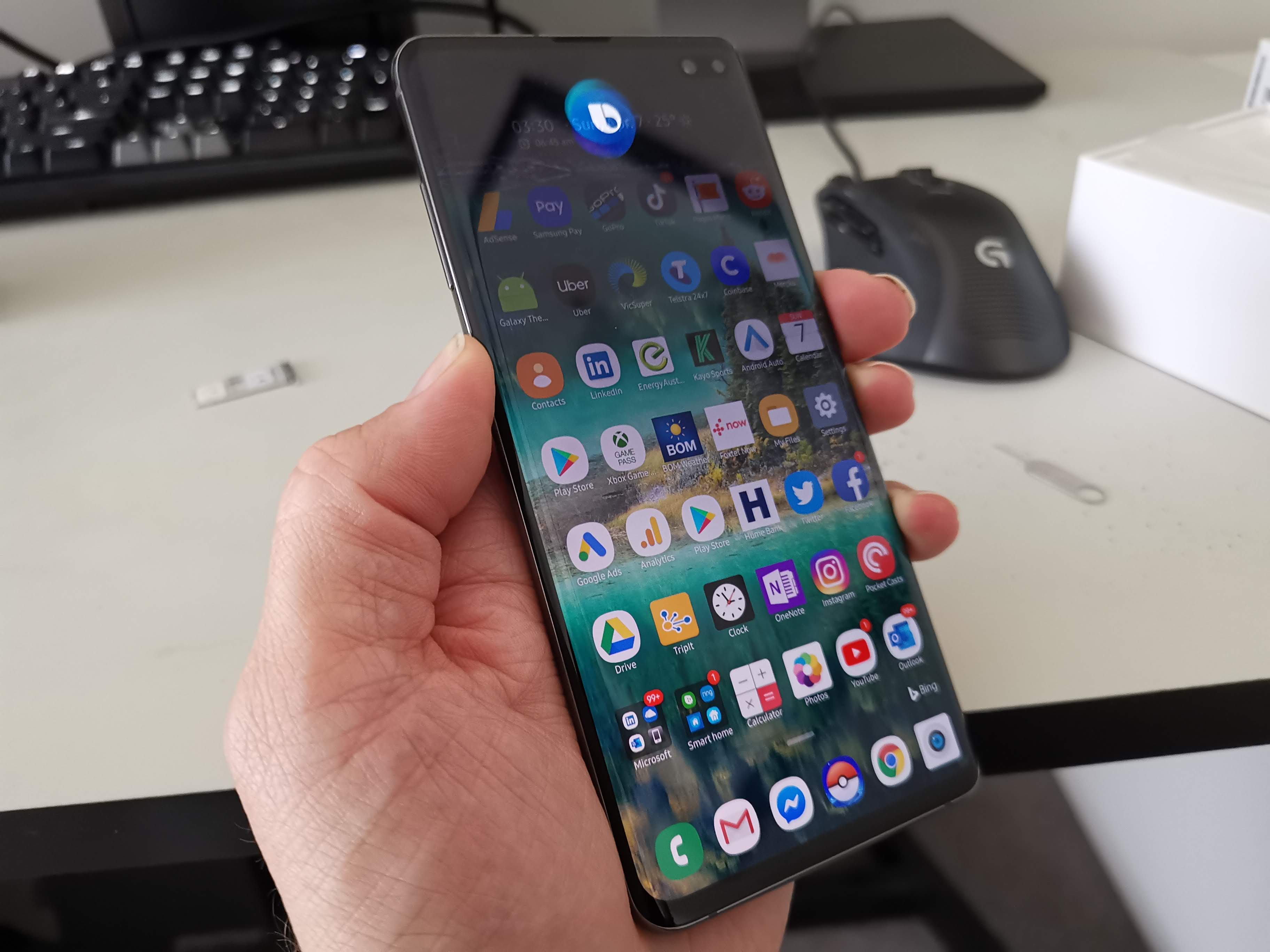 Given the S10+ is Samsung’s latest flagship, the list of complaints a fairly short. The phone is fully featured and will make any owners very happy with their investment. If I had to select couple of items that could be improved they’d be battery and the speed of the camera under certain conditions.

With a super fast 1 year old, I’m incredibly conscious of how fast the camera’s digital shutter works. It’s not just the first shot, but the subsequent shots that can be important and I often found the camera lagging when you shoot multiple shots rapidly. This should be something that can be addressed with a software update.

The battery life on the S10+ will get most users through the day. As a heavy user who’s been impressed by the battery resilience of other modern smartphones, I’d say the S10+ delivered the expected battery life, but it didn’t surprise me. If you travel on any kind of frequent basis, I’d definitely pack a USB-C cable, particularly if you’re a mobile gamer or someone who loves to film video and share socially.

Finally I’d say the headphones that ship with the S10+ are pretty forgettable. They’re generic black headphones with a cheap feeling in-line control and these had me quickly reaching for my wireless Jabra earbuds with noise cancelling. At this price point, I’d expect a little more comfort and sound quality. 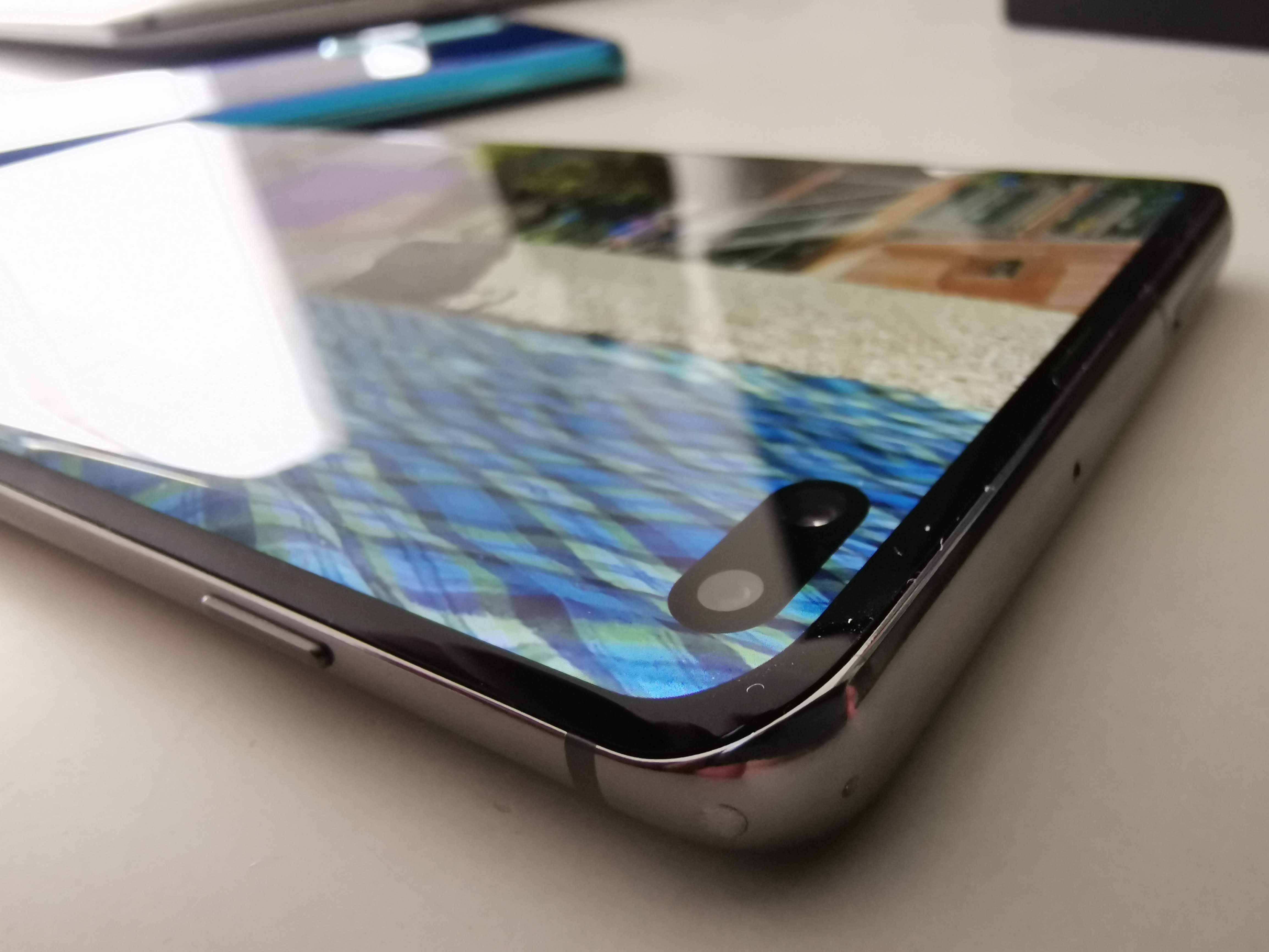 The Samsung Galaxy S10+ is available now from Samsung direct, or Telco’s like Telstra, Optus and Vodafone, or alternatively you can buy it outright from retailers like JB-HiFi or Harvey Norman.

Storage sizes range from 128GB up to 1TB, with colour combinations restricting the choices you have for storage. 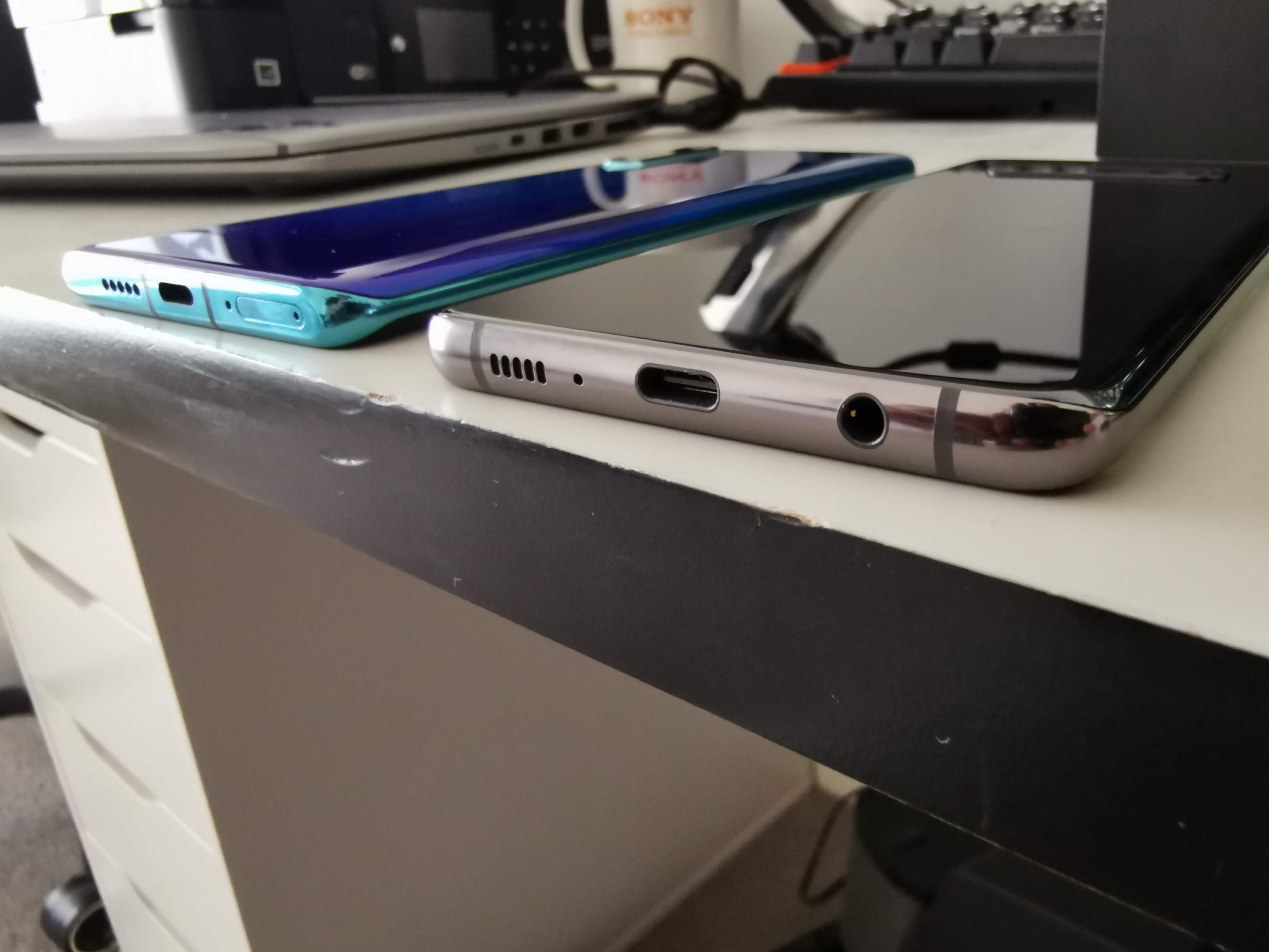 The Samsung Galaxy S10+ is another great device that celebrates a decade of technology iteration and innovation. The latest flagship devices from Samsung is definitely well worth the title with it’s long list of features. While the S10+ isn’t perfect, with competitors outdoing them on battery life, the design and performance of the S10+ is of a level that makes the phone feels polished and up to the task of delivering a fantastic modern, mobile experience to it’s owner.

In the last couple of years, the price of smartphones has stretched to what I believe from a sensible number at around a thousand dollars, to double that and beyond. At those numbers, it really is a hard case to make that it’s good value for money. As much as I love the Galaxy S10+, I can’t recommend anyone spend more than A$2K on any phone, it’s just not that much better than a A$1.5K device.

Samsung’s biggest strength is their ability to rapidly iterate and an annual cycle has served them well over the years. As China continues to come at them (at least outside the US), they may need to reconsider their release cycle as 12 months is a long time in the smartphone market these days.

I’m not entirely convinced the front-facing cameras punched through the display is the best solution, I actually think those devices with popup, or slide out cameras may end up being the final design solution to deliver face unlock, as well as display that stretches the entire width and length of the display.

All things considered, if you’re a Samsung fan, or just after a solid flagship from a known quantity, then you won’t be sorry if you choose the Samsung S10 or S10+.

Jason Cartwrighthttp://techau.com.au/author/jason/
Creator of techAU, Jason has spent the dozen+ years covering technology in Australia and around the world. Bringing a background in multimedia and passion for technology to the job, Cartwright delivers detailed product reviews, event coverage and industry news on a daily basis. Disclaimer: Tesla Shareholder from 20/01/2021
Previous articleKorea following Japan’s lead, to broadcast in 8K
Next articleMicrosoft officially release Edge dev, powered by Chromium