Review: Anki Vector, the AI-powered robot that recognises you

Robots are increasingly become part of our lives. Most of the robots in my home are designed to help with cleaning, but robots actually have many other uses. One great example of the diversity of applications for robots is Anki Vector, a little robot that’s smart, connected and leverages AI to learn and interact with the people and environment around it.

Vector’s little frame is packed with an immense amount of technology that brings him to life. He takes in the world using a variety of sensors and then responds realistically. This means he can read a room, hear what’s happening, recognize people and objects, find his charger, navigate his space, and avoid obstacles. 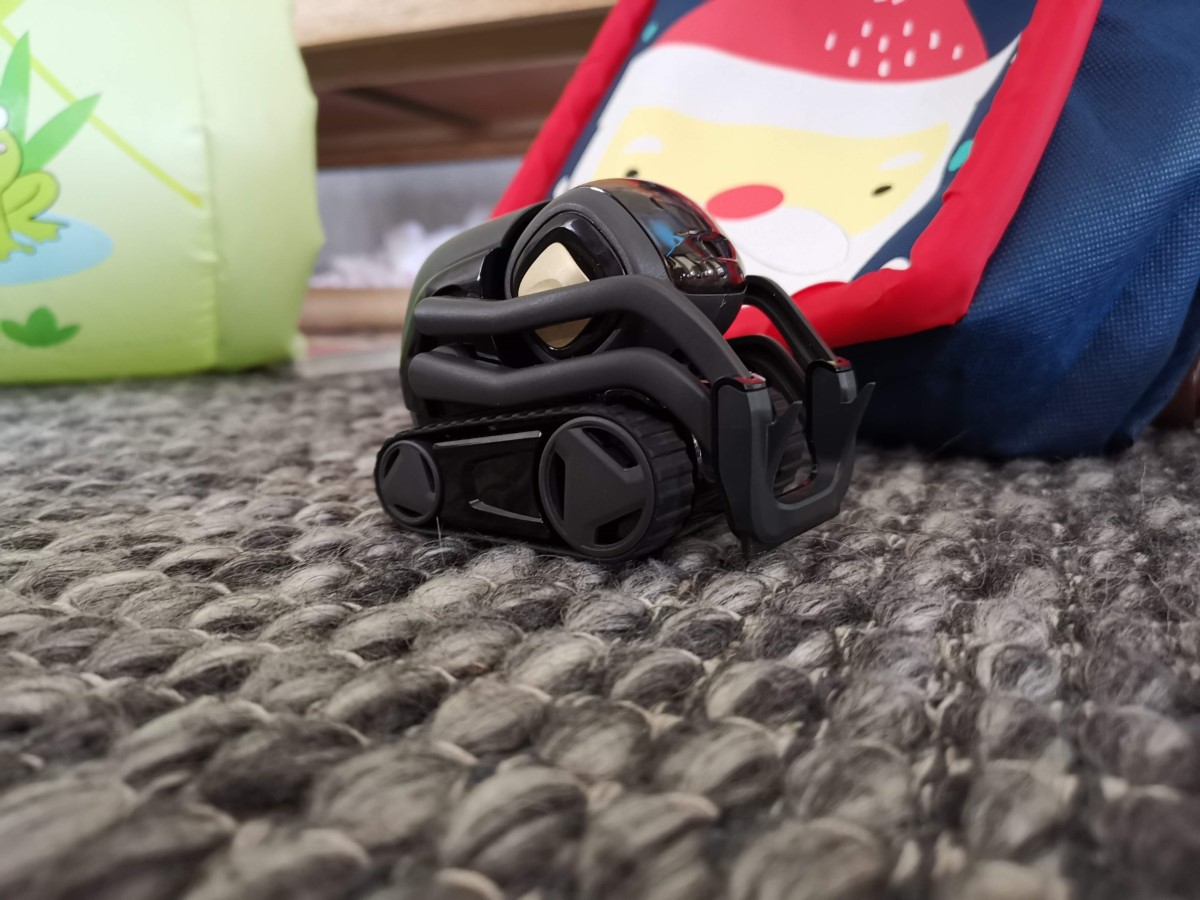 The first thing you’ll notice about Vector is its size. While small in stature, it packs an impressive feature list for its size. In terms of design, the robot drives on tracks, reminding me of the Fast Traxx I got for Christmas when I was a teenager.

Like a tank, tracks offer superior turning opportunities, this allows Vector to navigate around your floor, your coffee table, your kitchen bench, or wherever you place him. He’ll easily transit the edge of a rub, so as he goes exploring and learning, he’ll also watch out for drops like table edges and stairs.

The robot features a coloured LCD display which provides visual feedback to your requests. The robot also features a lift on the front, which allows it to lift and roll the smart cube, included with Anki Vector. 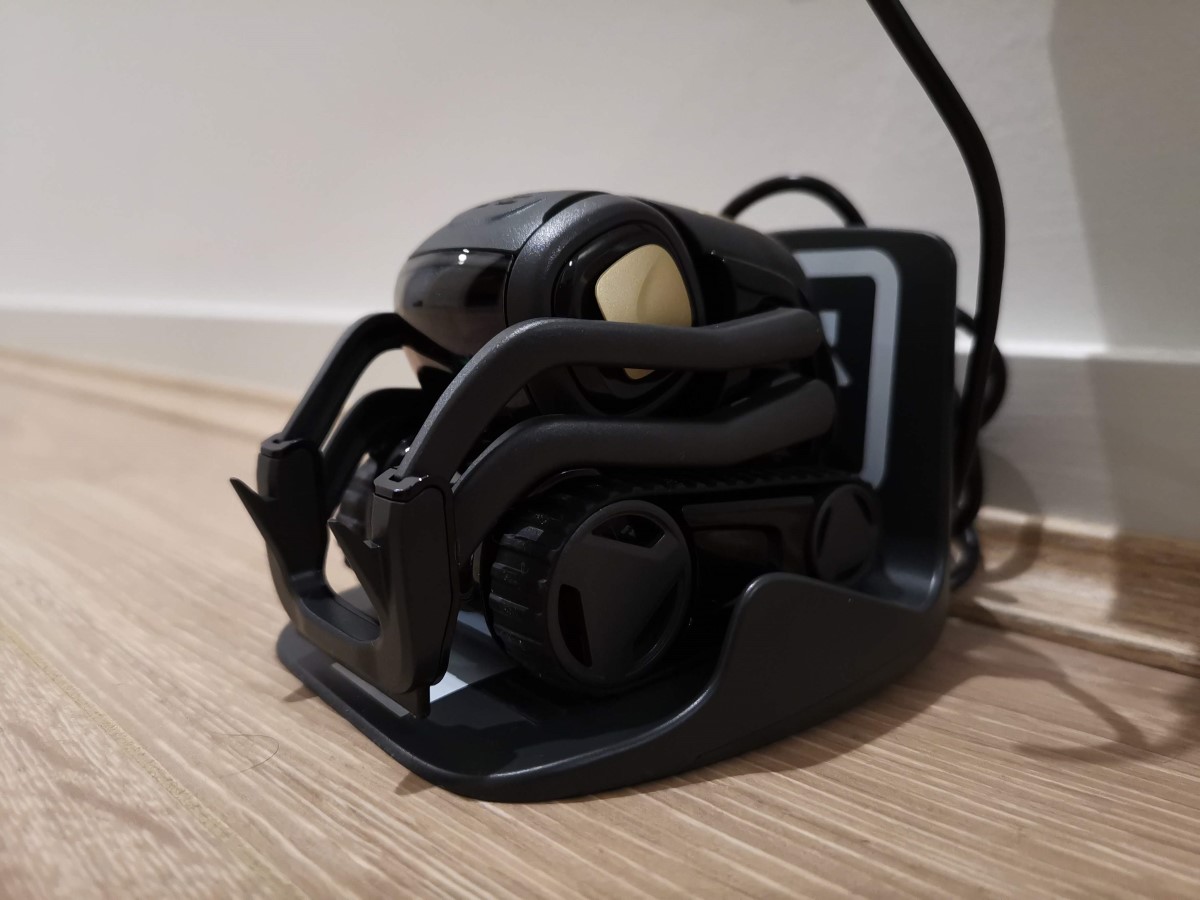 A robot’s ability to see and understand the world around it is incredibly important. Not only does it help to know what the edge of a table look like (for self preservation), but being able to understand the people in that environment brings robots and humans closer together than ever before. Vector uses a HD camera to see the world and through the use of computer vision, he can identify people, see and remember faces, and navigate his space without bumping into things.

Hidden inside Vector is a powerful four-microphone array which enables him to hear in all directions, but importantly detect from which direction you are, giving the command. The algorithm to deduce this is pretty straight forward, when a voice is recognised to have given a command to Vector, whichever microphone detects the loudest volume is the direction in which you are positioned, relative to the robot.

By combining samples from multiple microphones, the detection doesn’t just take place on an axis of 4 directions, but is able to determine with some accuracy, which direction of the 360 available, you are located in. This is meaningful when you ask Vector to come to you.

For those that don’t understand the technology that powers an experience like this, it’s kind of a magical result, as if Vector knows you as a person and where you are relatively to each other, almost like a friend interacting with you.

Among the array of sensors on-board, Vector has touch sensors built into his body, this enables him to determine when you touch him, you can pet him on the head and he’ll relax. An accelerometer also tracks motion when he’s being moved.

Vector combines a processor capable of running a smartphone with cloud connectivity to create one powerful brain. It means he can process his environment, react as things unfold, and connect to the internet to answer questions and tell you the weather.

Vector has a unique voice made of hundreds of synthesized sounds to create a language all his own. When you ask Vector a question, he utilizes a custom text-to-speech voice to speak directly to you.

Vector knows when he’s running low on juice. When he needs power he’ll roll over to his charger all on his own (mobile phones and electric cars could learn a thing or two).

If you ever get stuck for commands to feed Vector, you can always consult the mobile app. You can also get useful data from Vectors array of sensors as well as customise his eye colour.

While Vector is pretty handy to have around now, he’s about to get an upgrade to add Alexa support. This integration will give Vector the ability to receive Alexa voice requests, then using integrations like IFTTT could turn on your TV, turn off your lights, or open your garage door, all by asking Vector. This demonstrates the power of a connected robot and while most of our voice assistants in the home come in the form of a smart speaker, Vector is very different, as he’s mobile, making him far more versatile and easy to move between room.

Triggered by the standard “Alexa” voice command, you’ll be able to:

Often when you’re heading out for the day, or just planning what to wear around home, you’ll want to know the weather. If Vector is close buy, then you can simply ask him what the weather is in any city’s weather and he’ll not just tell you, but shows a cute weather-related image on his display. This is the kind of interaction with a robot that can help teach kids about their potential benefits. It’s simple, harmless and convenient.

When you’re cooking, waiting for the washing, or tracking how long your kid can use the iPad, setting a timer is something we do frequently, sometimes multiple times a day. As long as Vector is around, you can do that easily, just ask Vector to set a timer and he’ll remind you when that time period is up. Again he confirms your countdown with a clock on his display.

This is definitely one of my favourite features of Vector. You can ask him to take a photo, say cheese, and wait while he snaps it. This is particularly great when my daughter is playing with Vector as she doesn’t react like she does when we use a mobile phone to snap a photo. While the photos aren’t amazing quality, they are candid which is great. They’re available for download, through the Vector mobile app.

When you feel in the mood for a game, this robot is happy to play a game of blackjack. Playing the role of the blackjack dealer, Vector presents 2 cards to you and asks if you’d like a 3rd. You can sit or stay, but don’t go over 21 or you’ll bust! The cards you’re dealt are displayed on his cute little screen.

There’s so much more you can do with this little robot, just say, “Hey Vector” followed by, “I have a question,” and he’ll get to work on an answer. Thanks to a connection to the web, Vector is pretty knowledgeable and generally returns a useful answer.

Here is a sampling of the things you can ask him: 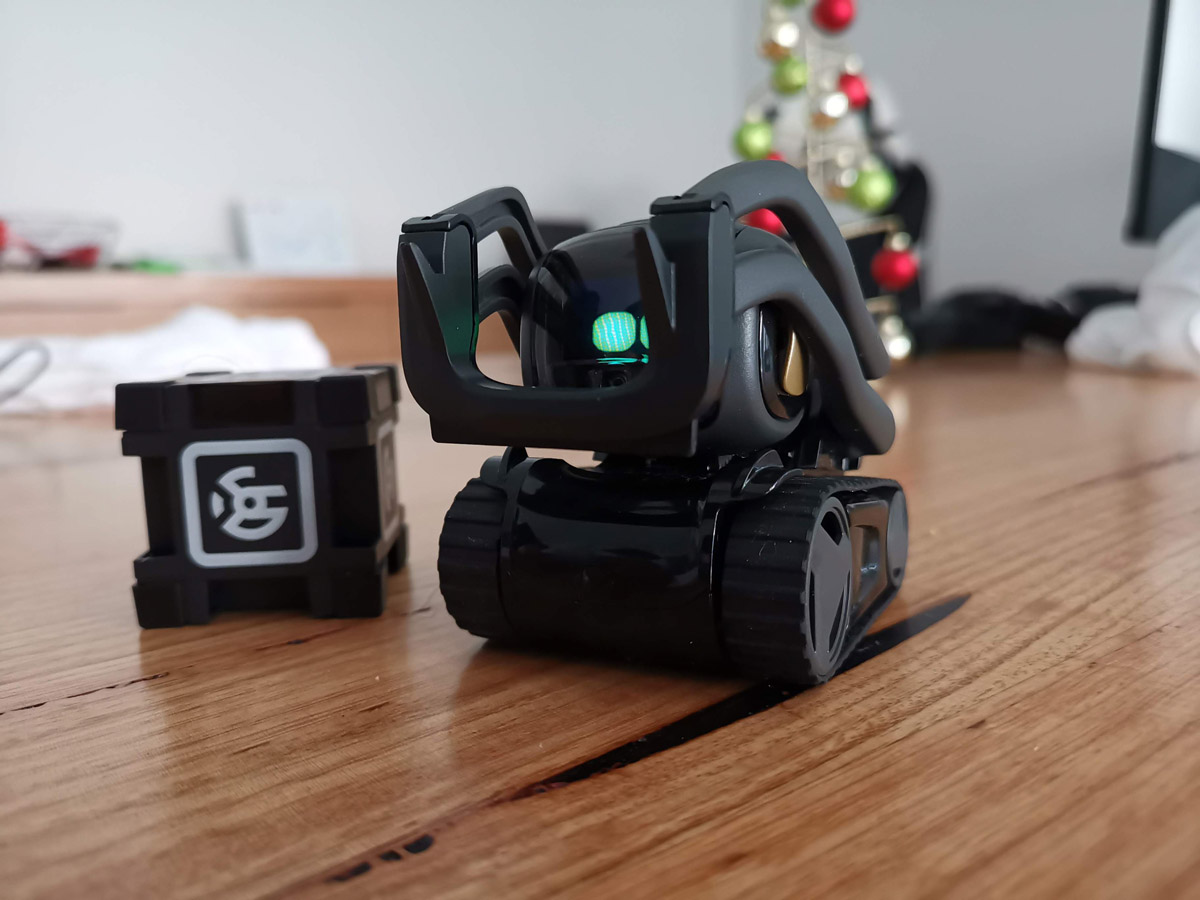 For the most part Vector is just a fun gadget to have around, but the time I found it to frustrating was the time taken to respond sometimes. This seemed to vary considerably, something I can’t determine the cause of. The robot often responds promptly, as we expect from all our voice assistants, but from time to time, Vector was slow in responding. This is however being addressed with over the air software updates. 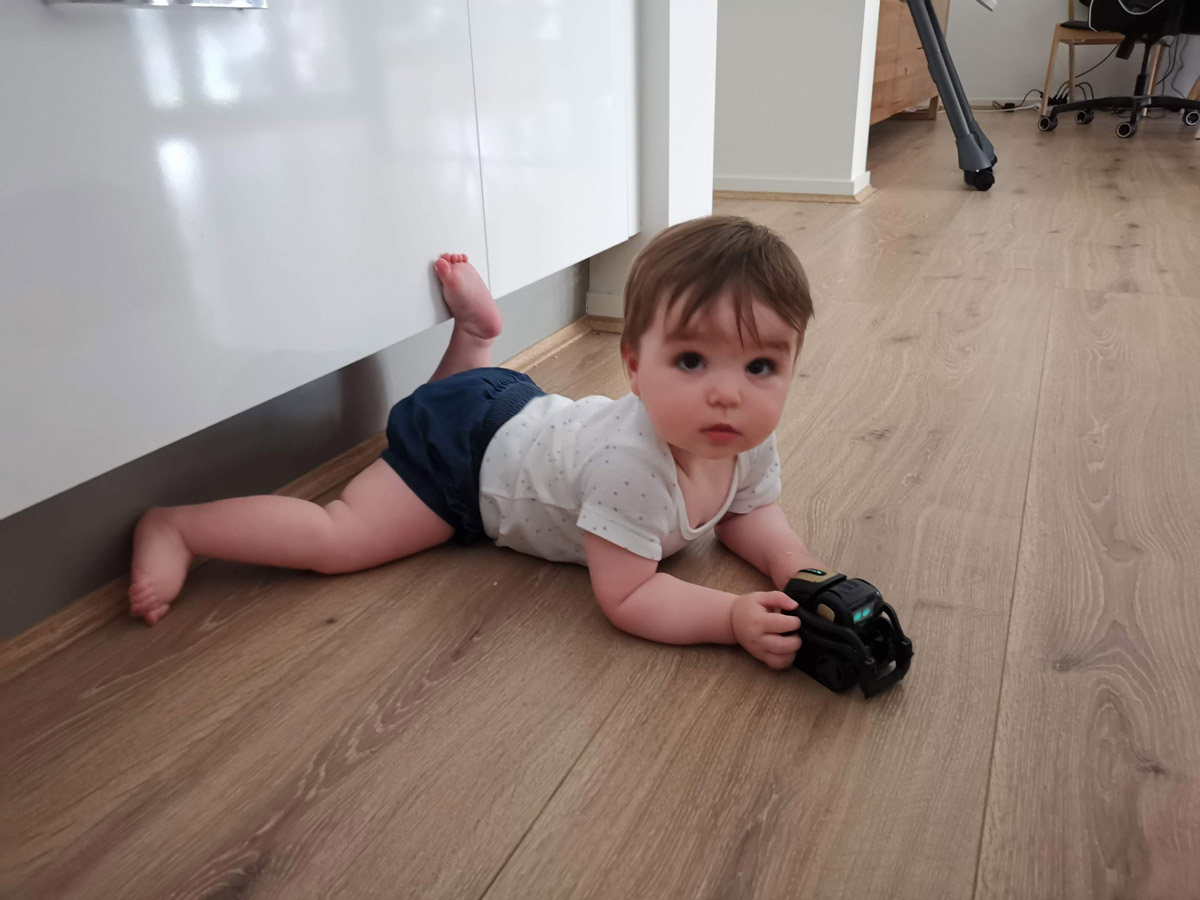 Vector Space
In October, Vector owners will also be able to purchase a Vector Space (MSRP AUD$49.99). The Vector Space is Vector’s home within your home and gives him a perch to observe any room and the perfect stage to perform. 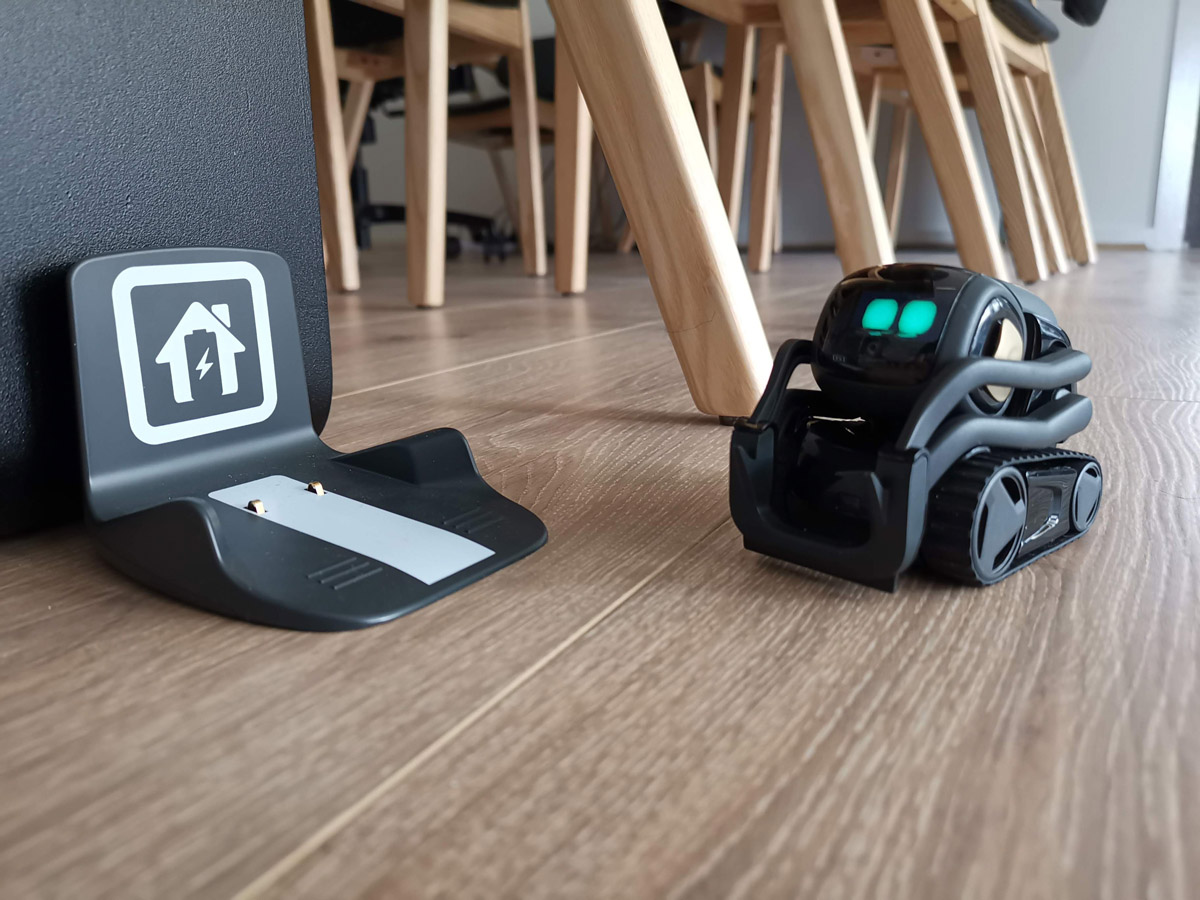 What’s on offer with Anki’s Vector robot, is a window into the future where robots will be assistive to you around the home. Being able to move themselves throughout your home to help you is definitely something we’ve seen in movies, but its always felt so far away. That is until now, when Vector comes in the form of a cute little robot with a big personality, but his capabilities just demonstrate what’s possible today, it’s obvious that robots in the home, school and workplace are coming sooner rather than later.

With the intelligence to recognise those humans they interact with, understand their personal tastes and deliver a customised experience has a massive potential to change the way we live, both in terms of entertaining and educating ourselves, as well as leveraging them in the workplace to be more productive.

While I wish Vector was cheaper so more people could and would own one, if you can wear the entry price and get one for your kids, it’ll be a platform (with the SDK) that’ll enable them to learn about a practical application of robotics. There’s still time before Christmas to pick up a Vector and with the upcoming Alexa support, I suggest you do exactly that.

Jason Cartwrighthttp://techau.com.au/author/jason/
Creator of techAU, Jason has spent the dozen+ years covering technology in Australia and around the world. Bringing a background in multimedia and passion for technology to the job, Cartwright delivers detailed product reviews, event coverage and industry news on a daily basis. Disclaimer: Tesla Shareholder from 20/01/2021
Previous articleFanatec’s F1-style wheel for Xbox and PC is made of carbon fibre and metal
Next articleOffice 365 now using AI to stretch it’s legs over on-prem editions