In the market for a new TV? Then you’ll want to consider your needs for the next 5-7 years and that means 4K everything should be realised by then. You’ll also want a TV that has a modern UI, that’s fast and responsive like your phone. In an ideal world, you’d also be able to control it with your voice, using Alexa or Google Assistant and definitely have all of your favourite IPTV apps to get all your streaming TV shows and Movies.

Sony believes they have a compelling offer that fits the bill with the X9500G. The TV comes in sizes ranging from 55″ (reviewed) right up to a massive 85″. As I’ve said in previous reivews, I think 65″ is the right value for money this year, but not everyone can fit a 65″ display in their living room, or bedroom, that means the 55″ should appeal to those in smaller houses or appartments who are space constrained.

After spending a couple of weeks with the Sony, it’s time to break down the reality of owning this TV, what’s good and what’s not, let’s get into it. 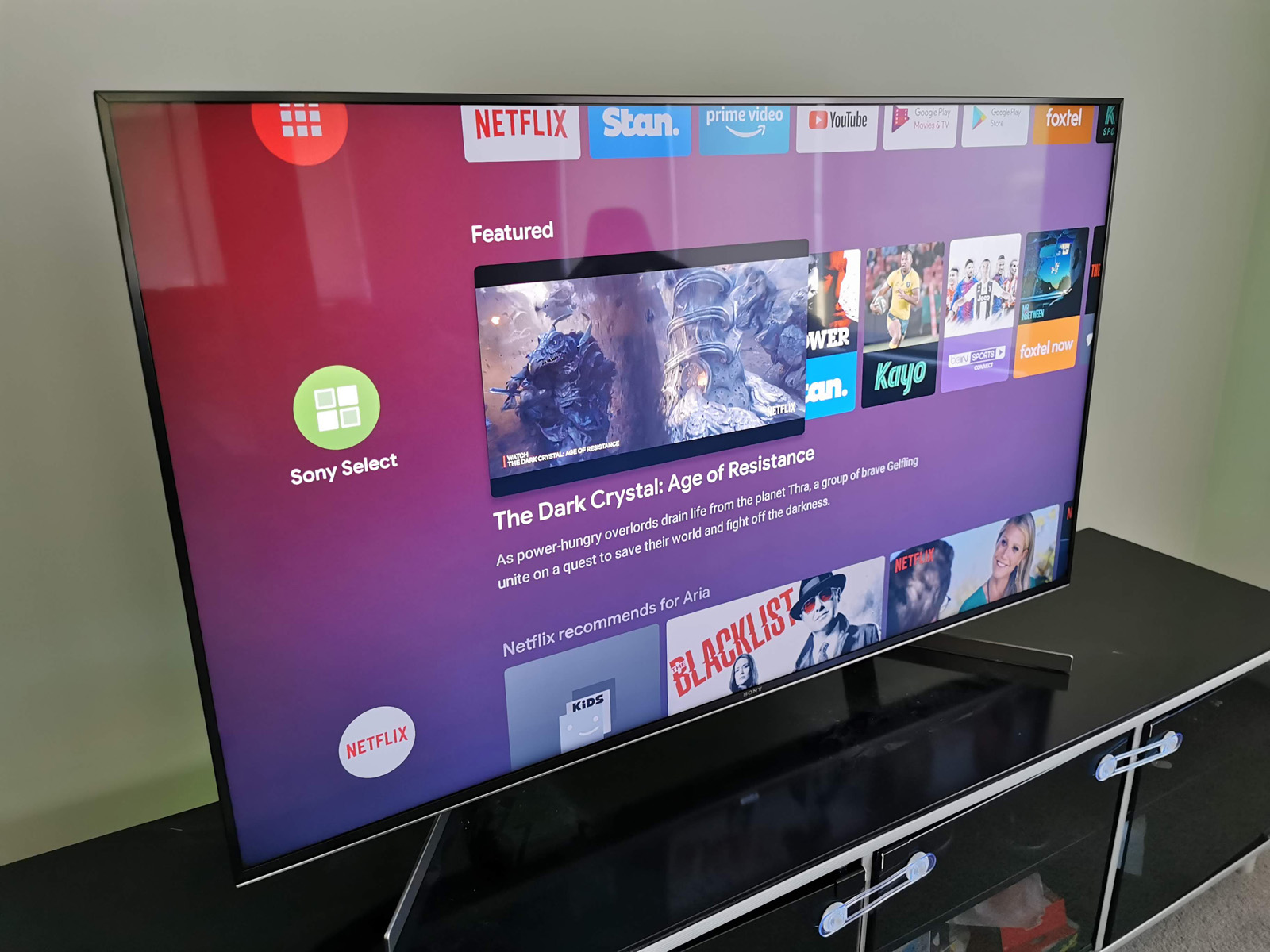 If you’re a TV designer, you’re job is pretty easy, with the virtually bezeless display taking center stage. The only aspects you need to go to works on are the stand and if you imagine the rear of the display will be on display, maybe you get a little creative.

With the X9500G, Sony has done a nice job of creating a seriously thin and stylish display that’d look great mounted on your wall.

One of the design attributes I like in this TV is the cable routing built right into the stand. If you’re a neat freak and like to hide all your cables, then this is honestly one of the best solutions to that problem. Embedded in the stand are cable routes to hide everything. 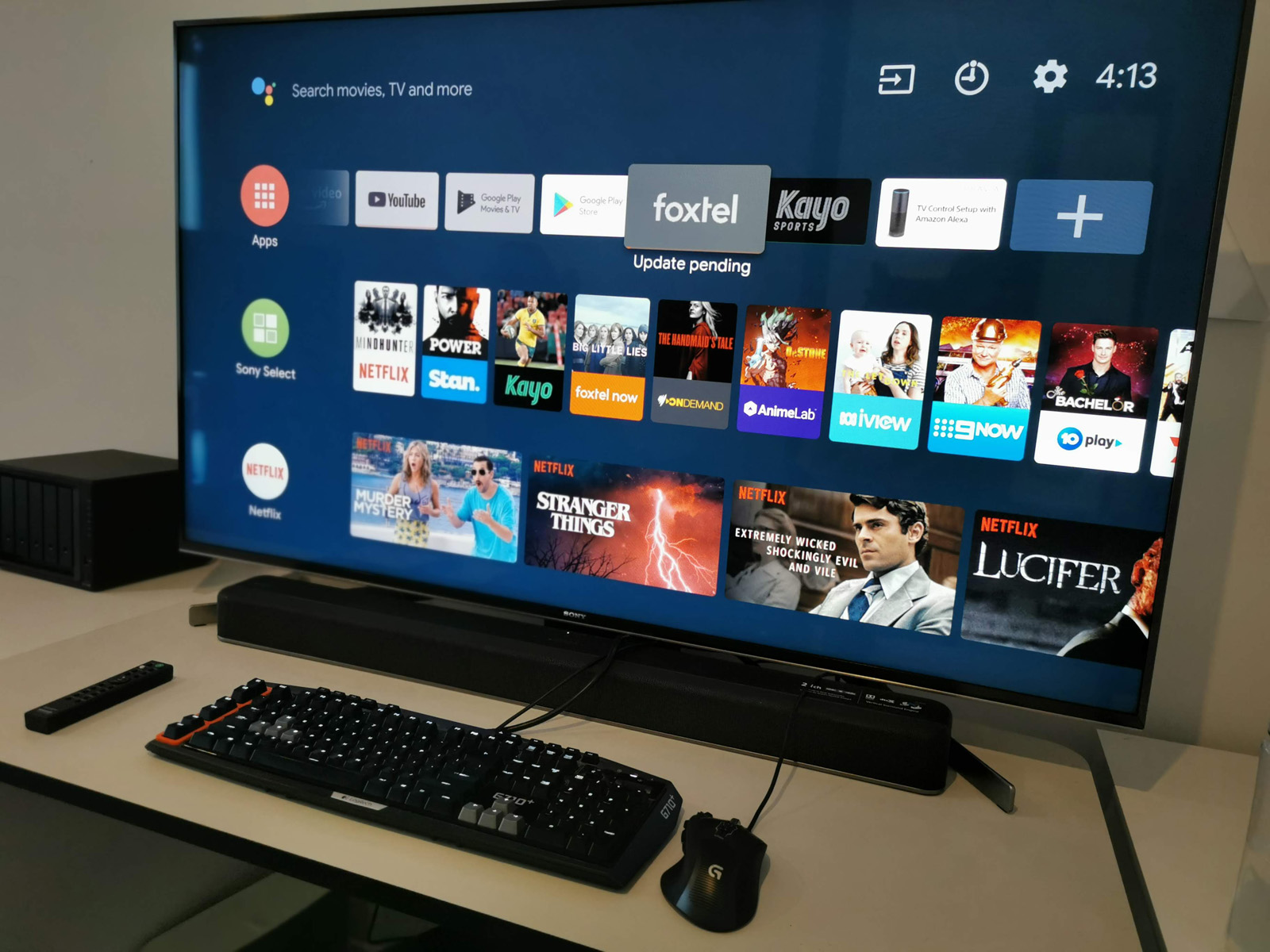 Most of us are fairly ADD and like to jump between apps. Perhaps we’re too spoilt for choice, but the app switch is often the task that makes or breaks a TV. This is what you’ll do multiple times, every single day and really is where you discover if the manufacturer has skimped on the processor and if they have the software chops to deliver what we expect. Our expectations for the biggest screen in the house, often is shaped by the smallest screens in youre life, your phone. Regardless of the platform you’ve chosen, phones are fast and responsive and anything less in 2019 would be unacceptable. I feel far too often TVs are given a pass because our legacy TV experiences have performed so poorly.

I’m not kidding when I say this is the fastest TV I’ve used. It’s also the first Android TV that I’ve used running 8.0 and paired with Sony’s hardware, it’s a stellar experience. Handing over the OS of your TV to a third party like Google must be a difficult decision inside a company, but Sony should be encouraged by the end result and know it was absolutely the right choice. Just like the auto makers before them, TV manufacturers are generally terrible at updating their software after purchase and that also impact app support.

When you leverage a platform like Google’s, you get a lot for free. There’s the amazing Voice support through Google Assistant, there’s brilliant app support, of which can all be pinned to the home screen. There’s clearly been an amazing focus on performance with all apps launching and loading video streams faster than ever before.

I must have used the Foxtel Now / Foxtel Go / Foxtel Play apps on more than a dozen different devices and scrolling through the list of channels has never been faster than it is on this TV. I had to remind myself this experience wasn’t being powered by the latest gaming PC, but an in-TV processor. YouTube, Netflix and basically anything else I tried were all the same.

When it comes the visual performance of the TV, Sony’s X1 Picture Processor detects hundreds of different objects on screen and intelligently enhances brightness, detail and colour. From the couch, you’ll just get to enjoy clear, bright and realistic video. The processor also features an object-based super resolution technology which detects individual objects in a picture and ensures their detail is preserved on screen. On each frame, hundreds of objects are identified and their resolution is individually enhanced to give a picture of exceptional accuracy and detail. While I apprecaite the effort that goes into creating a system like this, honestly the picture just looks great, like really great, best shown off by a 4K60 YouTube or Netflix video.

As you will be well aware of, many of our content sources are still not 4K, so Sony lean on their X-Reality PRO upscaler to take content and make it look great. Sony’s implementation of motion smoothing in the form of X-Motion Clarity. This keeps fast motion and smooths out any jitter, tears and blurring, resulting in silky smooth visuals, perfect for sport and action movies. Thankfully this motion smoothing is done tastefully and avoids the trap of a few years ago where TV would make movies look like bad TV shows.

For most of this review, the TV was setup in my rumpus room which is surrounded by 6 windows. This lets a crazy amount of light into the room which means the brightness needs to be significant to overcome the amient light. Thankfully the Sony looks great, and has brightness to spare. When the sun goes down (or you pull the blinds) the ambient light sensor automatically adjusts the brightness as to avoid blinding you and keeping things accurate.

Specially developed to enjoy Netflix originals and accurately reproduce the same picture quality in your living room of the studio master. With Netflix Calibrated Mode, the creator’s vision and intent is faithfully preserved. As Netflix Recommended TV, Sony had to create a TV that was, responsive and lived up to Netflix’s stringent accuracy requirements. The label is intended to make the buying decision easier, knowing that Netflix don’t slap this label on many TVs, so you can be assured this is a good one. 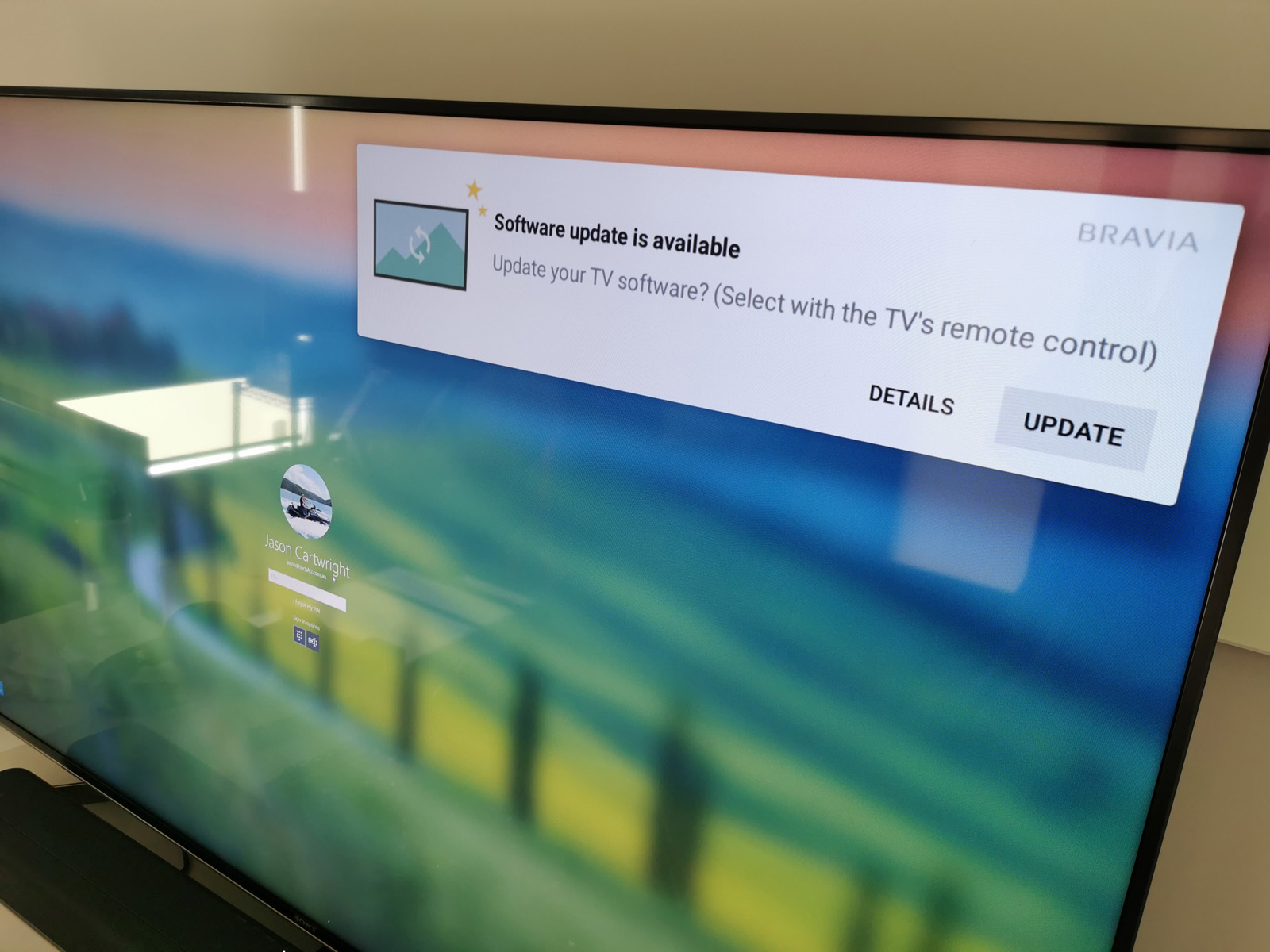 New TVs are generally packed with loads of features, especially when compared to the old TV you’re replacing. Features are perhaps one of the biggest determiner of which TV you buy, only second behind the price tag.

The linup of features Sony have on offer here are some of the best I’ve seen in 2019. Many of these features are present thanks to Sony’s choice to deliver Android TV.

Sony engineers have clearly focused on achieving the stamp of approval from the industries most important bodies. To begin, there’s Dolby Vision which confirms the display meets the strict display standards can deliver content to your living room, just as the directory intended.

Dolby Atmos also means the audio on offer from the TV, fills the room with immersive surround sound and really is one of the best sounding displays I’ve heard. Sony will also happily sell you an upgraded sound system if you want to go to the next level. In terms of audio, you can use the standard optical audio out, or take advantage of the new HDMI ARC (Audio return channel).

Sony also worked with Netflix to achieve the ‘Netflix Recommended’ label. That means this TV offers one of the best Netflix experiences on offer. This works on a points system that includes things like time to launch application, dedicated button on the remote and support for the best picture quality to ensure your Netflix looks as good as it possibly can. This TV features Netflix Calibrated Mode that brings the creator’s vision directly to the TV. With Netflix creating their own originals, all in 4K, they know image quality and basically it means you can relax and just enjoy amazing looking TV shows and Movies. 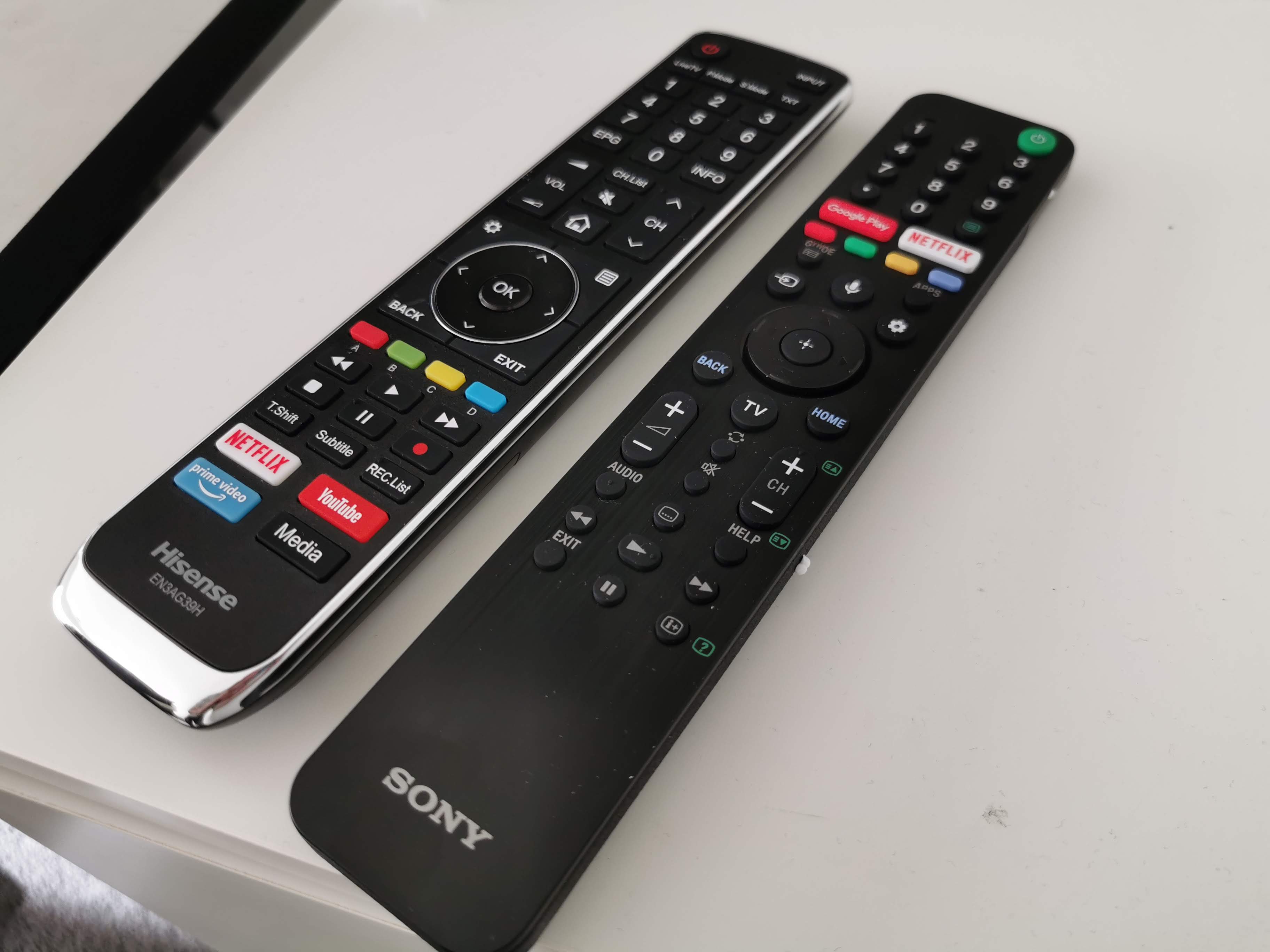 This is going to be a very short list, with very few things to complain about with such a well executed TV. The biggest complaint I had is the remote control. White it features a Google Play and Netflix buttons, It’s pretty clear that YouTube should be there and Foxtel. While not everyone uses these two apps, I’d suggest a majority of potential owners do.

In an ideal world, you’d use a digital remote (aka your phone) or your voice (via Alexa or Google Assistant), so the lack of physical buttons for these popular video apps can be overcome. 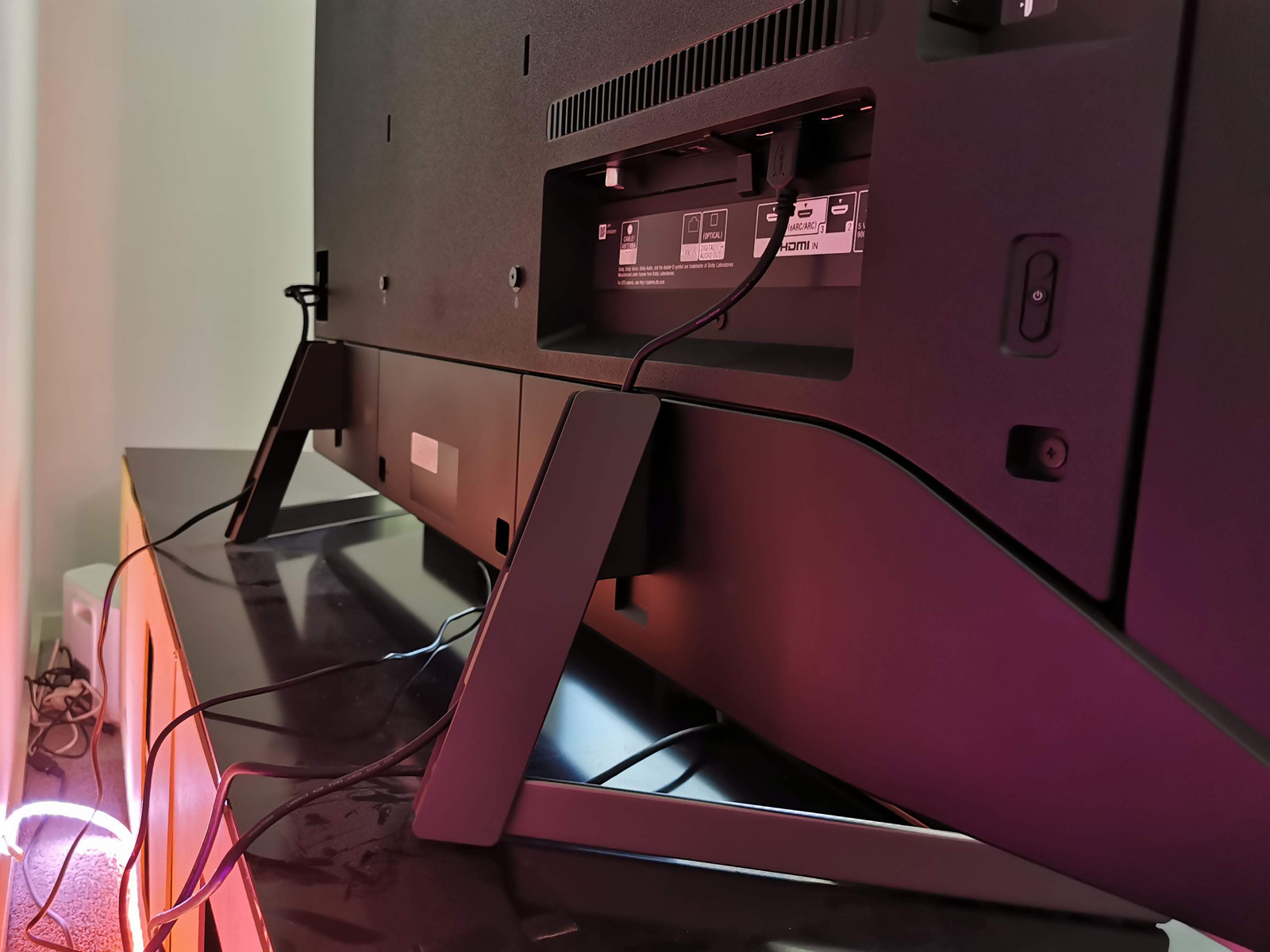 Generally you can find TVs are far lower prices than their RRP, but it looks like Sony has a set price for this one, regardless of the retailer it costs A$1,995.00 from the following stores: 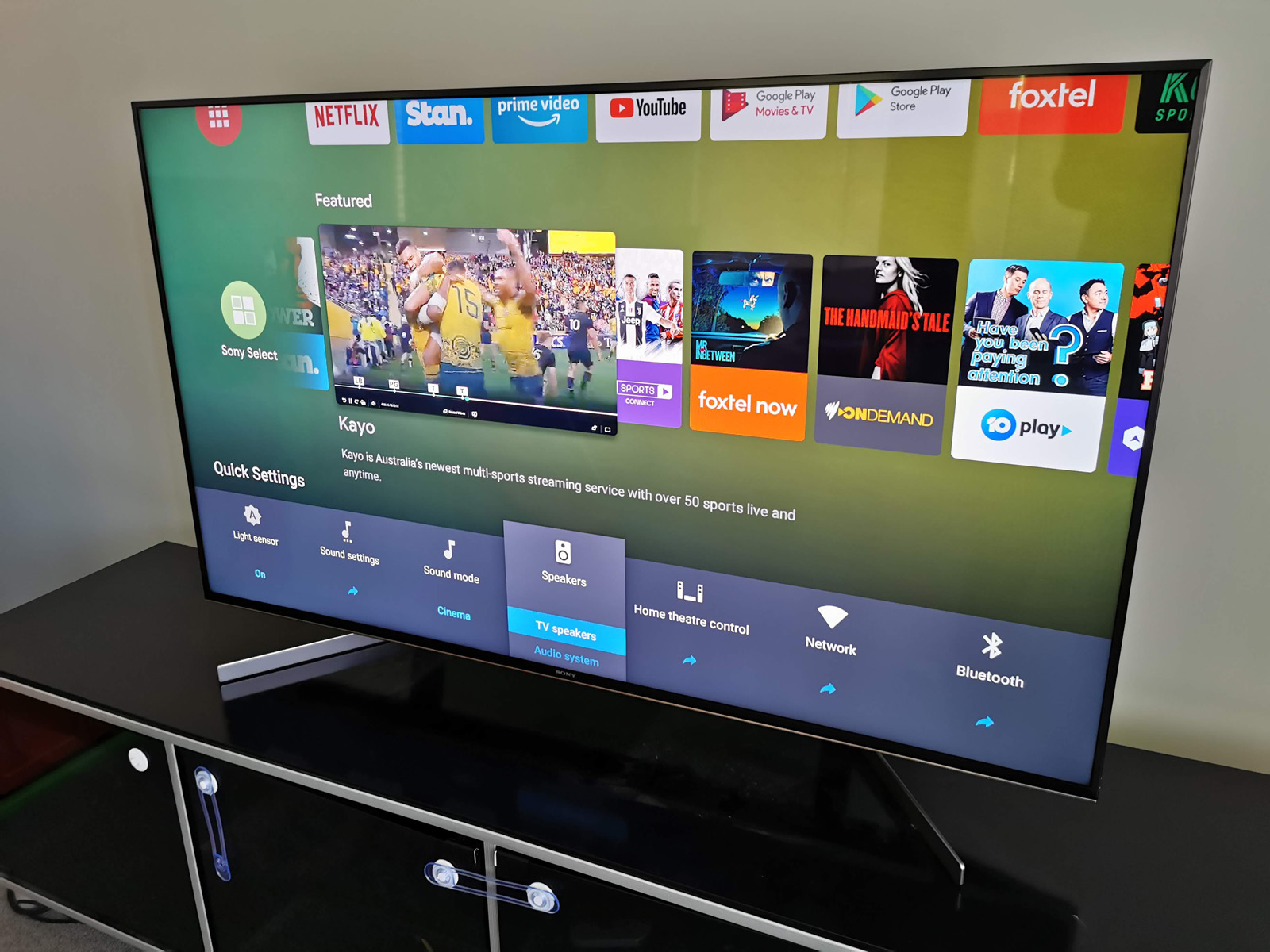 This TV has made me think differently about Sony. While brands like Samsung, LG and even Hisense have taken much of the TV market’s attention, Sony have a seriously awesome offering here. My first LCD TV was a 52″ Sony Bravia and after seeing what the company has done with investments in display technology, but especially the interface and peformance, I would recommend you return Sony to the top of your short list.

When you interact with your TV, the speed at which it responds really determines how you use it. If you know that switching from app to app is slow and clunky, you’re likely to do it a whole lot less, which means you’re really inhibited by a TVs limitations. Thankfully what Sony have put together here, with the right combination of hardware and software, creates an experience that is possibly the fastest TV that I’ve used. From tunring on and off the TV, to pulling up the guide, going home, launching new apps and scrolling through the home screen, it’s an incredibly slick experience.

Jason Cartwrighthttp://techau.com.au/author/jason/
Creator of techAU, Jason has spent the dozen+ years covering technology in Australia and around the world. Bringing a background in multimedia and passion for technology to the job, Cartwright delivers detailed product reviews, event coverage and industry news on a daily basis. Disclaimer: Tesla Shareholder from 20/01/2021
Previous articleTesla’s massive V10.0 software is already out in Australia
Next articleAussie Broadband now allow customers to ‘Kick’ their own service