Hands-off with Tesla Autopilot in the Model S P90D Yesterday I drove from Melbourne to Wodonga along the Hume Freeway and probably touched the wheel a dozen times. The latest and best Tesla Model S is the P90D.

Update: The P90D is on the website but the performance and 90kwh battery are both options to upgrade from the P85D,

Thanks to a series of radars and sensors, this car is unlike any other on the road and can quite literally, drive itself.

The trip was one I’ve taken many times before, 3 hours, 15 minutes and 322km. The Freeway is long and unadventurous which makes the trip a long, boring one. After a long drive like this, even with a stop half way, you wind up feeling physically fatigued, as you’re constantly monitoring the ever changing traffic conditions around you. Inevitably you’ll catch slower vehicles and need to perform lane changes often. If you happen to be travelling in a car without cruise control, you’re fatigue is worse, as you’re mental energy is constantly eroded as you micro manage your speed and ensure you don’t trip over that magic number that leaves you with a few demerit points lighter.

After getting out of the city streets I jumped on the Hume and once I did, something pretty special happened. The driver’s display showed the road ahead of the virtual Model S graphic, with two grey lines beside the road. This indicates the car is capable and ready for Autopilot to be enabled.

This assessment of when the vehicle is ready is achieved by the data collected from the array of sensors and radar around the car, the two most important are located in the front bumper and on the reverse side of the rear vision mirror mount. To enable Autopilot, it first had to be turned on in the settings, using that massive touchscreen, this has to be done while stopped, as it prompts to confirm you want to enable a feature that is still in Beta. Of course we do.

On the road, all you need to do is pull the cruise control stalk twice towards you and you’ll hear and audible tone and the road on your driver’s display will turn blue. There’s also a blue steering wheel icon in the right to let you know the Tesla has it under control.

When you enable Autopilot, it always displays a prompt at the bottom of the driver’s display that explains you always need to be ready to take back control. At this point I was ready for the Tesla to nag me periodically to put my hands back on the wheel, to make sure I was still attentive, but thankfully there is no nag factor here. As long as the road data is comprehensive enough for the car to have a solid picture of the environment around it, the car is happy driving itself down the highway.

This means with the adaptive cruise set at 110km/h and the steering being done by the Autopilot, everything changed. Driving became a ride, an opportunity to take your eyes off the road for longer than the 2 seconds that had always been drilled into us since the age of 16. It turns out, the drive isn’t a boring one, its the staring down the black tarmac that’s the boring bit. I had plenty of moments of looking around and wondering how I was going to fill my time, there was a time where I did nothing for probably 40 minutes.

This does raise an interesting question, when the technology is good enough where the car can drive itself, what do we do with this time? I grabbed the manual out of the glove box and flipped through a few pages, occasionally glancing up to check, but the Tesla had everything under control. I felt confident enough that I could drop this and take the wheel should I need to.

Something I continued to think about it is the question of mobile phone use while driving. It seems all the advertising and threat of fines isn’t working. I can definitely see the real end game being that we do allow people to use their phones, which is naturally what they want to do, but we have to relieve them of their driving duties with autonomous vehicles to do that safely. We’re certainly not there yet, but it is fun to think about.

What I wasn’t prepared for was the speed at which I gained trust in the Autopilot system. It wasn’t an hour, it wasn’t half an hour, it was basically a few corners in where mentally I relaxed and trusted the technology, that the incredibly smart engineers at Tesla had done their homework and have been able to implement that technology in a vehicle on our roads, that I was driving. A quick check of the calendar, yep, it’ still 2015.

Everything I’ve heard from auto manufacturers is that the year where you can walk into a dealership and buy an autonomous vehicle is 2020. That’s the timeframe most are racing to, but here I am, 5 years before then and I’m in a car that’s doing the driving for me.

I got to experience the future of transportation.

Naturally I caught vehicles going slower than the 110km speed limit, and the Tesla slowed to the speed they were doing. This was typically trucks going up hill or 4WD towing caravans back from a Christmas break. For these times, maybe 6 or 7, I had to take control and navigate around them. I pulled over for a bathroom break at one service station and again at Euroa to recharge.

Typically I wouldn’t need to recharge there, but I had toured around Melbourne a bit before leaving. That experience of recharging I’ll talk about more extensively in another post. The Autopilot system in the Model S uses the line markings on the road to determine the area its playing in. That’s all pretty straight forward and there’s a high level of confidence probably close to 100% when you have either solid or broken lines between lanes. Where things get more complex is when the line markings are available, maybe a piece of road has been resurfaced or simply faded, or when you’re crossing a bridge. Fortunately the Hume is pretty well maintained, thanks to the volume of traffic that transits daily.

I did have one instance where Autopilot got confused and I had to take control. I was in the left lane, and there was a slight bend to the right in the road. There was also an freeway exit to the left, which had the zebra pattern as the road peeled off. Instead of following the lane and prioritising the broken line in the middle of the dual-lane freeway, it opted to track the left line, which broke off the to left. As the car moved to the left, the alarm sounded (music faded down which is a nice touch) and there was a visual warning to take control. I did, and while I was a wheel or so onto the zebra paint, I was easily able to steer it back on to the correct course. This is still beta. 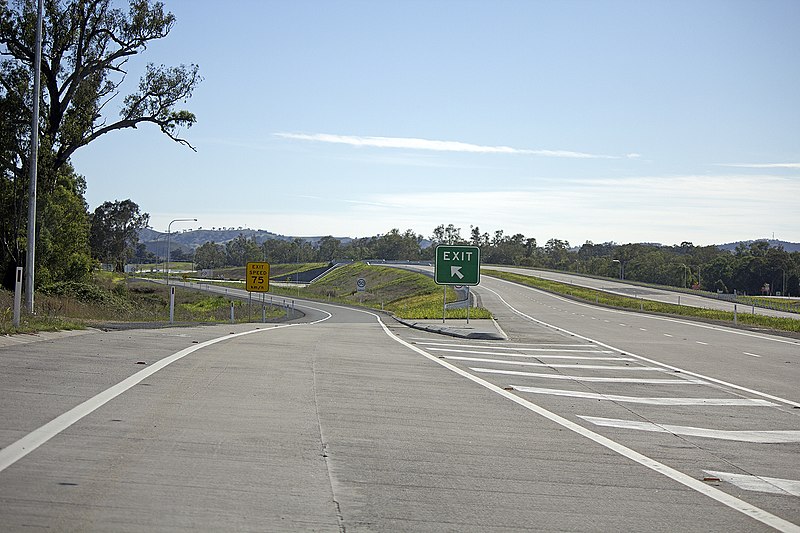 So that’s the kind of experience you need to pay attention to, where things get complex and the Autopilot could get confused. I surprisingly wasn’t concerned about every other exit on the freeway, there were many and this was the only one that caused that erroneous result. An important point is that at the time I wasn’t following any other vehicles.

This is important as the Autopilot system leverages the vehicle information from people ahead of you to also calculate decisions. When the system locks on to a vehicle it turns blue on your display. Had I been following a vehicle in range of the radar, the trajectory of their vehicle would have very likely avoided this situation completely as there’s an inherit expectation that you’ll want to follow the path of the driver in front of you, especially on a freeway.

The Autopilot is definitely not ready for suburban streets, as these complex situations are so much more frequent with traffic lights, bike riders, pedestrians, turns, u turns, hook turns, it really is a jungle and that’s why humans have thousands of crashes per year. Some of those crashes result in death and if I’m honest, humans haven’t got better at driving, but cars are.

Ideally you’d plug a destination into the GPS and the car will take you there. At this point it seems the technology is close, closer than even I thought to that being a reality. The easy stuff is all done, the places where you have plenty of data points, the car can navigate its way through the world, but the art of autonomous driving will be how engineers reconcile the instances where there isn’t enough data. That data is there, humans look for signals and react, so its simply about getting access to the right data. After arriving home from the 4 hour journey, I felt like I’d been sitting for 4 hours, but not driving for 4 hours. That’s because I wasn’t, the Tesla was, for most of the trip. Sure there’s a level of concentration you still need to maintain, but nothing like you normally have to. Often you check to ensure you hadn’t been slowed by traffic instead of managing steering inputs. If you have a commute, followed by an important meeting, I guarantee you’ll get out of this car mentally fresher and more prepared to take on that meeting than any other car.

After the long drive down the Hume Freeway, I wasn’t fatigued, not mentally like I normally am and this is why, this technology has to come to trucks sooner, rather than later.

Having Autopilot in a car is fantastic and thanks to Tesla, I will hate every other car I drive that doesn’t have it. However we take long trips irregularly, truck drivers do it daily, sometimes multiple times a day. You want to talk about actually reducing or even eliminating the road toll, technology is the answer.

If the Australian Government is really serious about reducing the road toll, they need to stop investing in more speed cameras, invest in technology and technology companies like Tesla that are actually making our roads safer in very direct ways. techauhttp://techAU.com.au
This post is authored by techAU staffers. Used rarely and sparingly when the source decided to keep their identity secret, or a guest author who isn't seeking credit.
Previous articleReview: Locksmart Bluetooth Padlock
Next articleUber celebrates New Years with their 1 Billionth trip