Cleaning your teeth is something we all do, however flossing is that thing we’re supposed to do, but often gets skipped in our busy lives. A new toothbrush from Waterpik, is designed to address this, but integrating a toothbrush and flossing solution in one.

The Sonic Fusion (SF-02A010-1) features a small water jet inside the head of the toothbrush. This small nozzle, can be adjusted to shoot water at between 10PSI to 100PSI, adjustable with a dial on the left of the device. The water flossing fires water to remove any food stuck between your teeth.

While the Waterpik Sonic Fusion has a party trick, it still needs to function well as a regular toothbrush. After using the toothbrush for just over a week, it’s time to run you through what works well and what doesn’t. 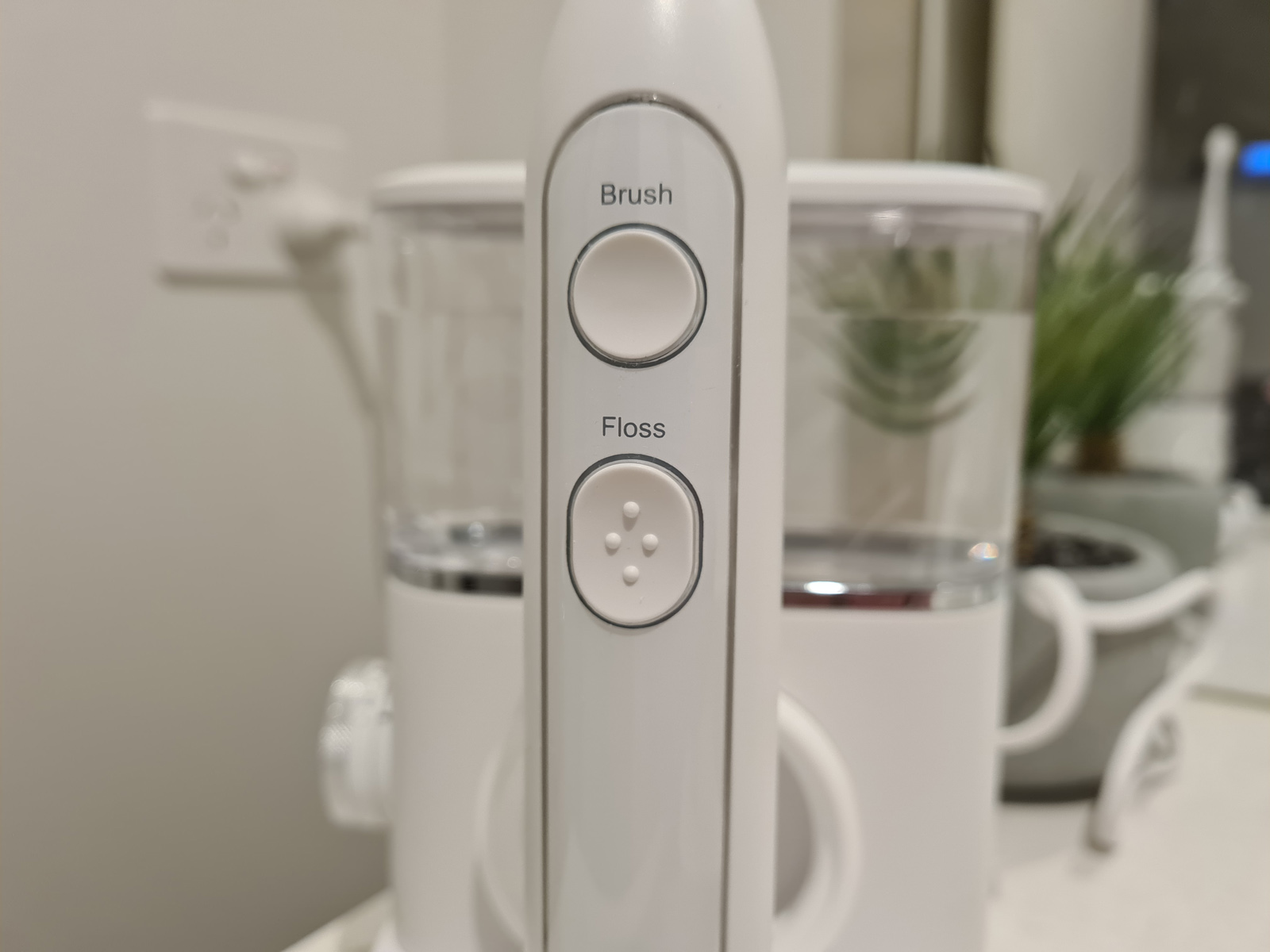 After unboxing the device, setup is a breeze. Simply connect it to a power outlet, which is typically fairly easy to find in your bathroom. Then fill the clear reservoir with water and connect your toothbrush to the dock. The toothbrush gets charged via fairly standard induction charging in the base of the stand, while the water for flossing is provided through a hose that retracts back into the stand behind the toothbrush.

Operating the toothbrush is incredibly straight forward, just press the Brush button for regular brushing and the Floss button if you want the waterworks. As you brush and floss together, you’ll definitely need to adjust your routine, as my entire brushing life, I’ve never been tethered to the sink before, so that definitely took some adjusting.

When you use the floss feature, the pressure is definitely something you’ll need to play with. The highest setting is insane and I doubt almost anyone needs that amount of pressure, while the lowest setting is almost useless, so I found myself landing somewhere around half-way worked well.

Something I really enjoyed about using the Sonic Fusion, was the built-in brushing timer. Not brushing long enough is something I’m definitely guilty of and having the brush help you meet the recommended 2 minutes of brushing, is great. Waterpik breaks up the brushing experience into quadrants, so you’ll get alerted every 30 seconds with the idea that you’ll then switch to the next quarter of your mouth.

Under the current COVID conditions (especially in Victoria), fewer people are going to the Dentist, so Waterpik believes having a great solution at home, that gives you that professional clean feeling, is the next best thing.

Also included is a travel case for the toothbrush, which has space for the 2 included heads. Once we’re able to travel again, the toothbrush would be fine to take on trips without the base station with as much as 2 weeks battery life off the base. Obviously, without the base, you’re not able to use the flossing function, but it would operate as a great toothbrush.

If you’re someone who needs or wants to brush their tongue, then the brush head is shaped in a diamond shape, specifically to assist with this task. The bristles are also soft enough to use on even sensitive gums.

For those that care about the detail, the toothbrush vibrates for the equivalent of 30,000 brush strokes per minute, improving on the closest competitor at 27,000 pm. 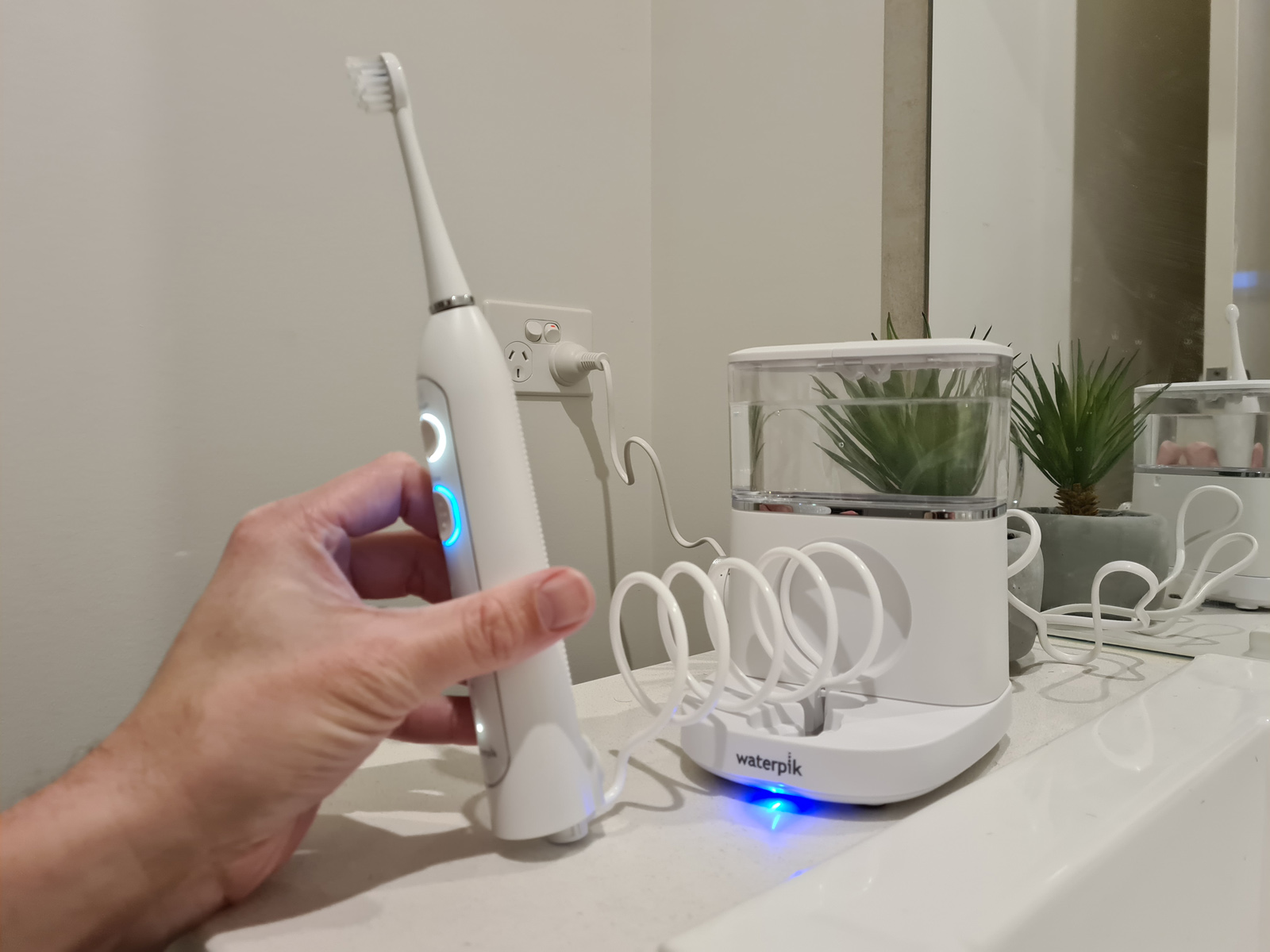 As a flossing device, the Sonic Fusion works really well, especially given the seriously powerful water jet. As a toothbrush, it cleans your teeth using a vibrating head, which isn’t uncommon, but when you come from a toothbrush with a rotating head, I don’t feel this is as effective in cleaning the tooth.

Using both functions at the same time is definitely possible and kind of the whole point really to save you time, however, I would never floss for 2 minutes, so I found myself cleaning my teeth first, then flossing for around 30 seconds afterwards.

Something WaterPik really focused on was the cleaning performance when cleaning and flossing simultaneously. This does present a challenge in that a stream of water, against the surface you’re trying to clean, could create a water barrier that makes the cleaning less effecting. In testing this, I think they were successful in this endeavour, as the two functions can definitely function well together. As you move the head from tooth to tooth, that’s the opportunity for the water jet to work it’s magic and shoot the stream of water between your teeth, performing the flossing action. It’s important to take your time and pause between teeth when using it this way.

Overall I’d say my mouth definitely felt cleaner at the end of a cleaning and flossing session, than my regular cleaning, but that’s not unexpected, given you’re essentially rinsing as you go. You may think the water jet would  instantly wash away the toothpaste on the end of your brush, but it really doesn’t, as you brush head should be inside your mouth by the time you turn on the flossing function. 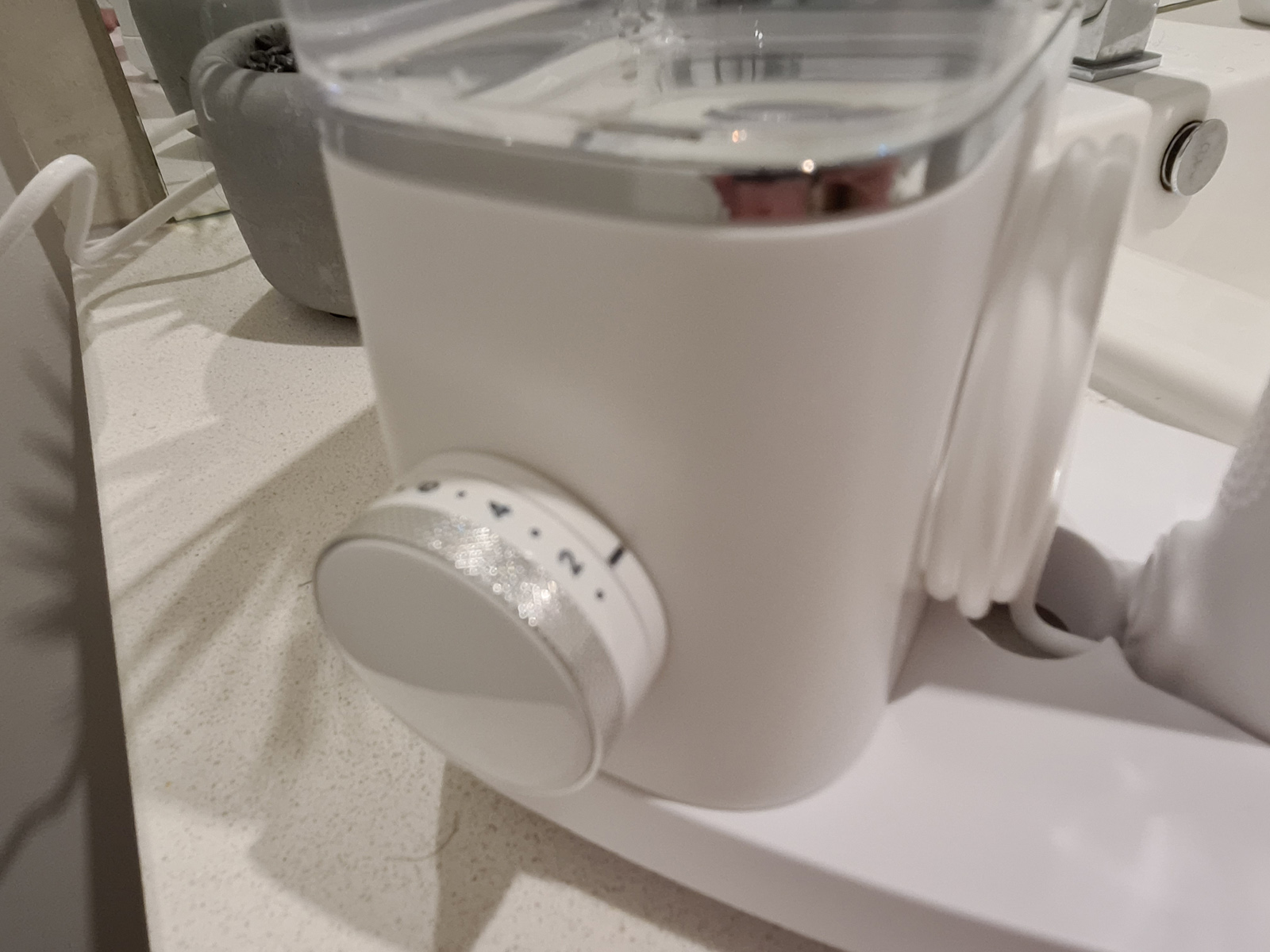 My biggest issue was the tethered connection to the base. This felt like a really big adjustment to make given you’ve typically got plenty of freedom to walk around as you brush. I’d love to see future versions that allowed the toothbrush to draw water from the reservoir when docked, then gave you 10-20 seconds of flossing time. Obviously the consequence would be an increase in the size of the toothbrush handle, but I think that’s a compromise I’d be willing to accept.

While the cord can be unravelled to give you more length, the way it tucks back into the base, essentially means you’re stuck with a curly tether to the base station. The upside is that it does resolve well when you’re not using the device. 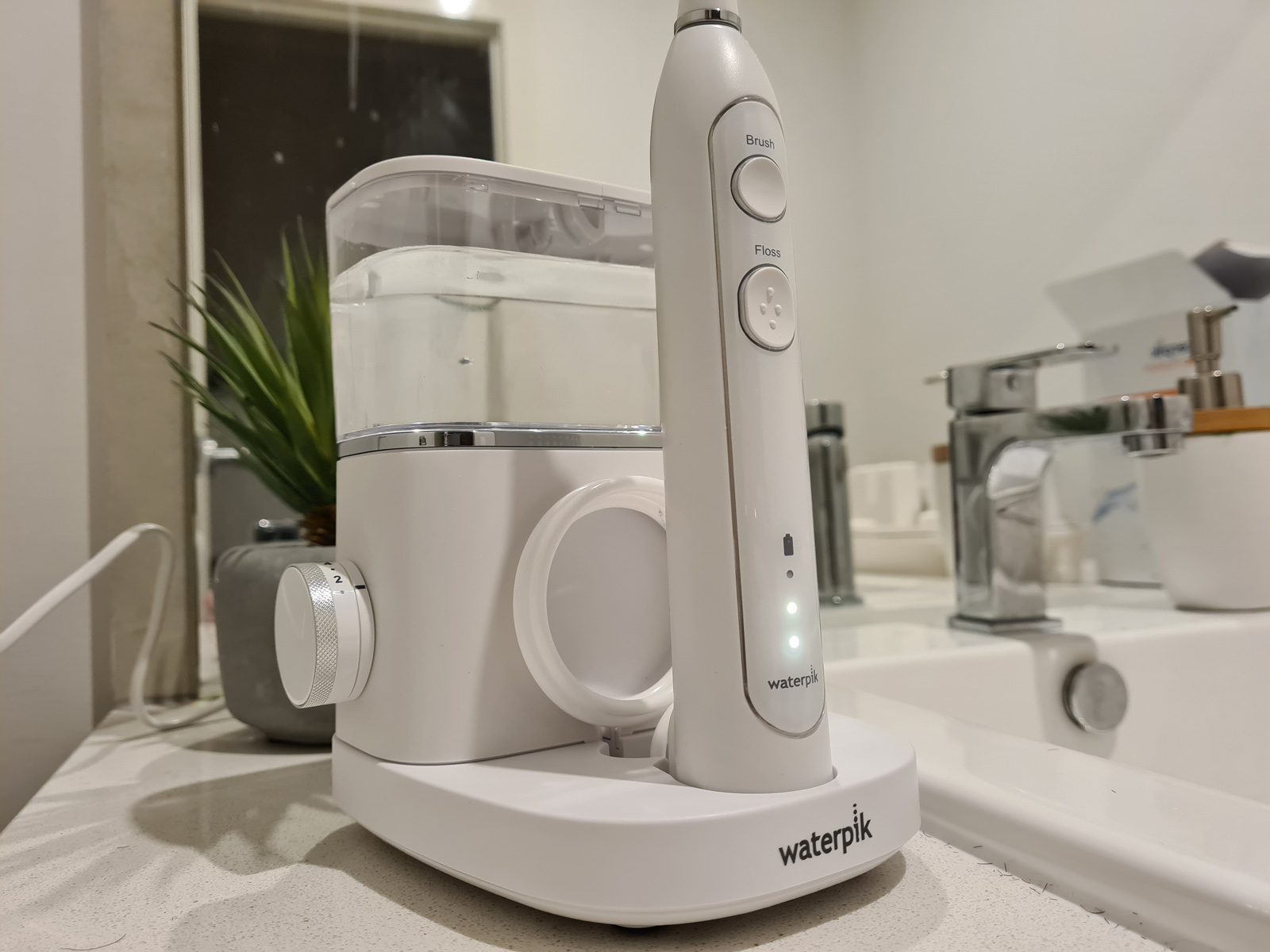 The Waterpik Sonic Fusion is available now for RRP $354.95. You can buy it through the exclusive distributor, The Shaver Shop, both at retail or online. This is quite a steep price point and much more than I’d expect to pay for any toothbrush, regardless of the function. It is definitely cheaper than a dentist visit, so in that context, it could save you money if you brush and floss as regularly as you should. The comparison should really be against other techniques to achieve the same outcome. Individually brushing and flossing will take longer, but come at a significantly lower cost, so you’re definitely paying a premium for having the two functions integrated.

You can also pick up a replaceable brush head dual pack – $29.95 and it is expected/advised that brush heads should be replaced every 3 months.

You can find more information at Waterpik. 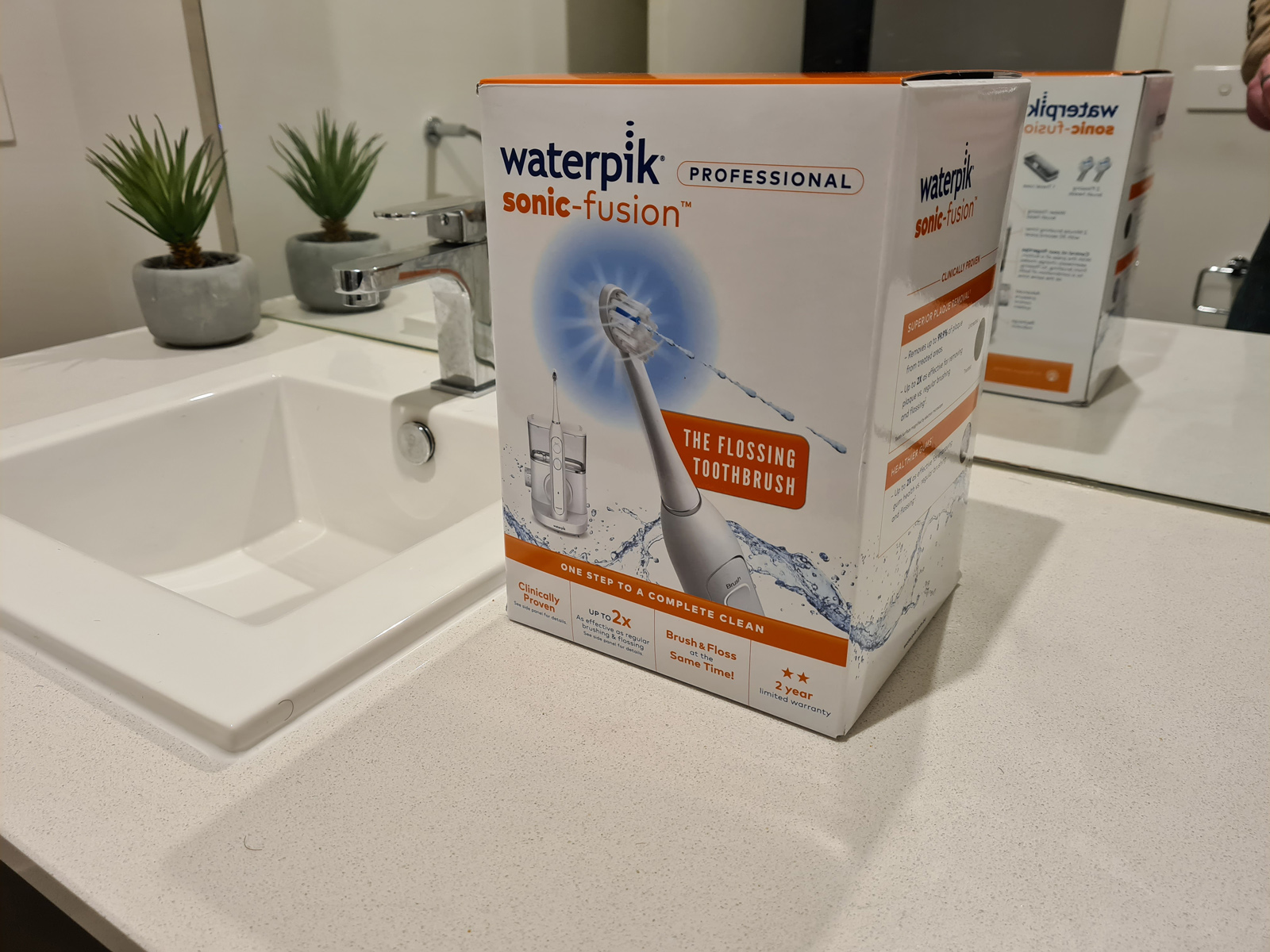 Overall I enjoyed the experience of using the WaterPik Sonic Fusion, it’s definitely a unique brushing experience. As I mentioned, I think there’s improvement opportunities to be had in regards to the corded tether to deliver water to your mouth for flossing, but on a whole, the toothbrush works as advertised.

It is advised that you fill the water chamber with lukewarm water, rather than cold as many people suffer from sensitive gums which can be an unpleasant experience when met with cold water at high speed. I love that the pressure is substantial, as the dial on the side allows you to get the right pressure to suit your preference and you certainly won’t be left wanting more.

I would love to see WaterPik try to integrate the flossing nozzle on a toothbrush with a spinning head, I think that’d deliver an even better clean, compared to the vibrating head available here.

The travel pack is a really nice inclusion and helps justify a little bit of the price, but unfortunately, I think the price point will be higher than many people are willing to take a chance on.

techauhttp://techAU.com.au
This post is authored by techAU staffers. Used rarely and sparingly when the source decided to keep their identity secret, or a guest author who isn't seeking credit.
Previous articleKen Block goes electric with new Projekt-E class rallycross car
Next articleTesla share price races from $220 to $2,000 in 1 year, closing in on $400 Bil market cap