The last time I reviewed a Razer mouse I was fairly critical of it, but Razer sent me their latest and its almost perfectly resolved every one of my complaints. The Razer Basilisk Ultimate wireless gaming mouse is a fantastic blend of features, comfort, speed and price which is why it is certainly my favourite mouse of 2019.

Razer continue to refine their lineup of products but they never lose sight of their laser focus on building products for gamers. Gamers are some of the most demanding, least forgiving audience and therefore the product has to be exceptional to stand out. 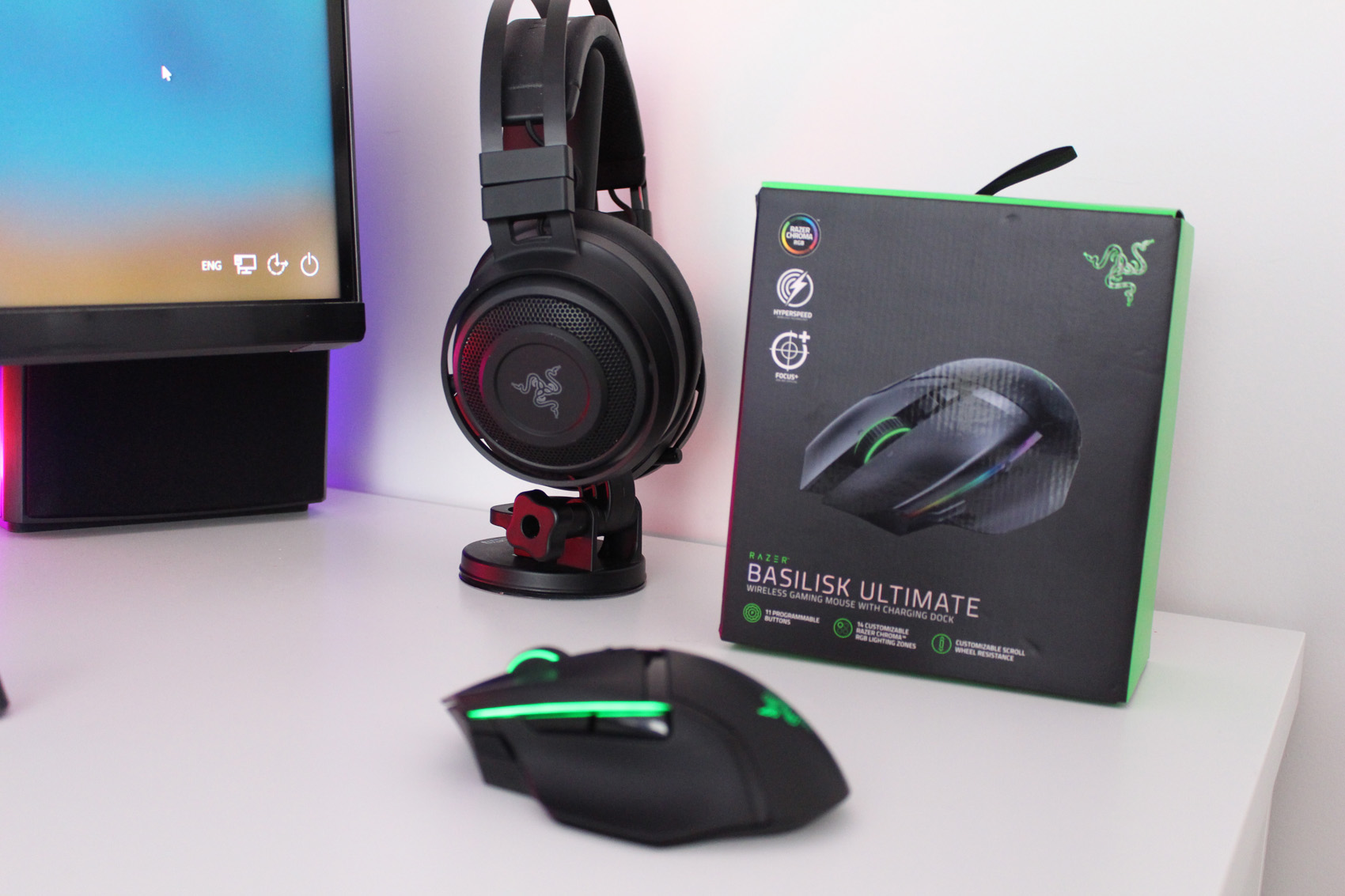 Unlike other mice in the Razer range, this one is crafted specifically for a right-handed users and that’s a dramatic upgrade in comfort and control over ambidextrous mice.

There’s a very nice compliment of black on black in the colour scheme and the I actually really like the look of the contrasting matt and gloss black finishes.

On the bottom of the mouse you’ll find a number of low-resistance pads that help the mouse glide effortlessly over the desk surface. This almost frictionless movement is a result of great design and a further understanding of what gamers need for success.

This mouse actually has a dock which avoids the need to manually connect a USB cable to charge the mouse. The inclusion of matching RBG LEDs, controlled by Razer Synapse, helps the dock feel part of your peripheral setup. 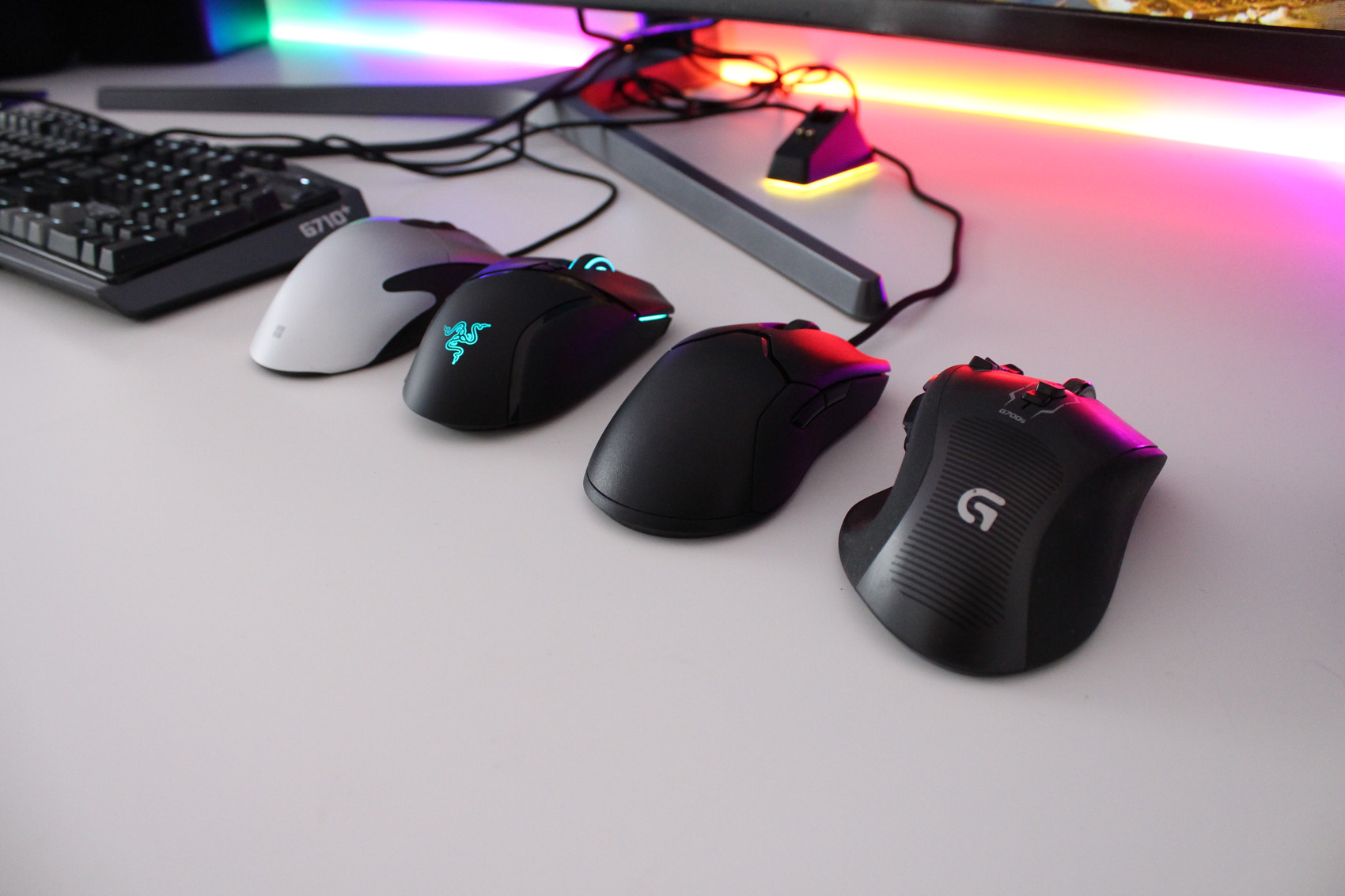 Our expectations of what a mouse can offer are actually really high at the end of 2019. Gone are the days where you could throw a laser in a plastic case, add a scroll wheel and a couple of buttons and call it a day.

Thanks to Razer’s HyperSpeed Wireless Technology, the mouse performs like a wired mouse and something I really appreciate is that when the wireless freedom is approaching it’s end (batteries are low), Razer leverage the built-in lighting to change the colour and let you know you need to charge. This helps avoid one of my biggest pain points with wireless mice and the reason I’d still been using a wired mouse. I simply can’t afford to have the mouse die in the middle of a gaming, or productivity session.

Razer loaded this mouse with no less than 11 Programmable Buttons. There’s 10 by default, which is amazing, but in the box you’ll find an optional Multi-function Paddle. This clips into the mouse and lands just in front of your thumb’s resting position. This feels and works a lot like the customisable paddles on the back of the Xbox One X Elite controller. This, like the other customisable buttons can be set to launch applications, perform any mouse or keyboard function and much, much more.

One thing you can’t do in the Razer Synapse software is control the wheel resistance. That’s done through two buttons in the underside of the mouse. I found you adjust this a few times over the course of the first few days of ownership, but after you find the right setting for you, it’s really not something you need rapid access to. I’ve had other mice that offer control over the scroll wheel, but this was a toggle button, whereas the Basilisk Ultimate offers you real control. On the lightest setting, it’s not quite free spinning, but it’s perfect for how I like to run the mouse. The most strict is really harsh and I doubt many people leave it on that extreme, but the great thing is, you’re in control.

Razer are going all out with their RGB in this mouse. With 14 zones, you get to customise, probably more than you care to. Personally I found my way to syncing the colours between my Razer Nari headset, the dock and the mouse. There’s all the regular effects and colour cycling, again its a case of really giving users the ultimate control over personalising their setup.

Something I hated about the last Razer mouse I reviewed, was that the sensitivty controls were underneath the mouse. Thankfully Razer have revised that strategy and any button can be mapped to dynamically shift between up to 5 different speeds. These sensitivity speeds can be fully customised and personally I landed on 3500 for desktop use, then shifted to 5500 for gaming, but if you’re fast enough to handle it, the mouse can actually go right up to 20,000 DPI. 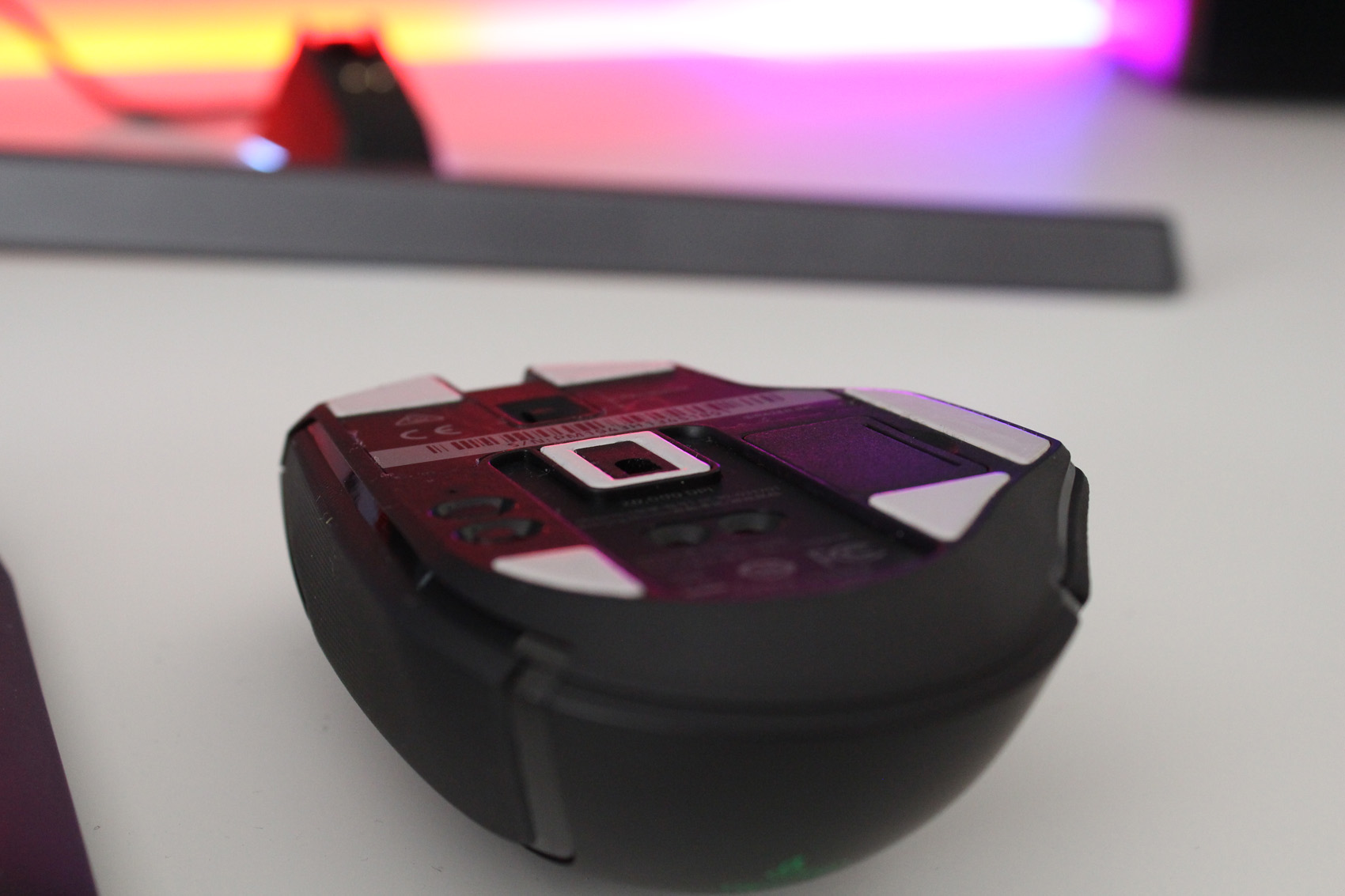 The dock feels like a great compliment to the mouse, made better by the integration of RGB lighting into the base of it. Those looking for a wireless mouse for the clean, minimal asthetic, will likely not be pleased at the proposition of adding a dock to their setup. Thankfully the dock is only needed occasionally and I’d route it through to hide in a desk drawer if this sounds like you.

The magnetic contacts work well, although it does take a few times to get the location lined up excatly right. If there was a way to make this easier and match up everytime (stronger magnets perhaps), I’d like to see Razer adopt this.

Other than that, I really can’t find fault with this mouse, it answers virtually every request I had. 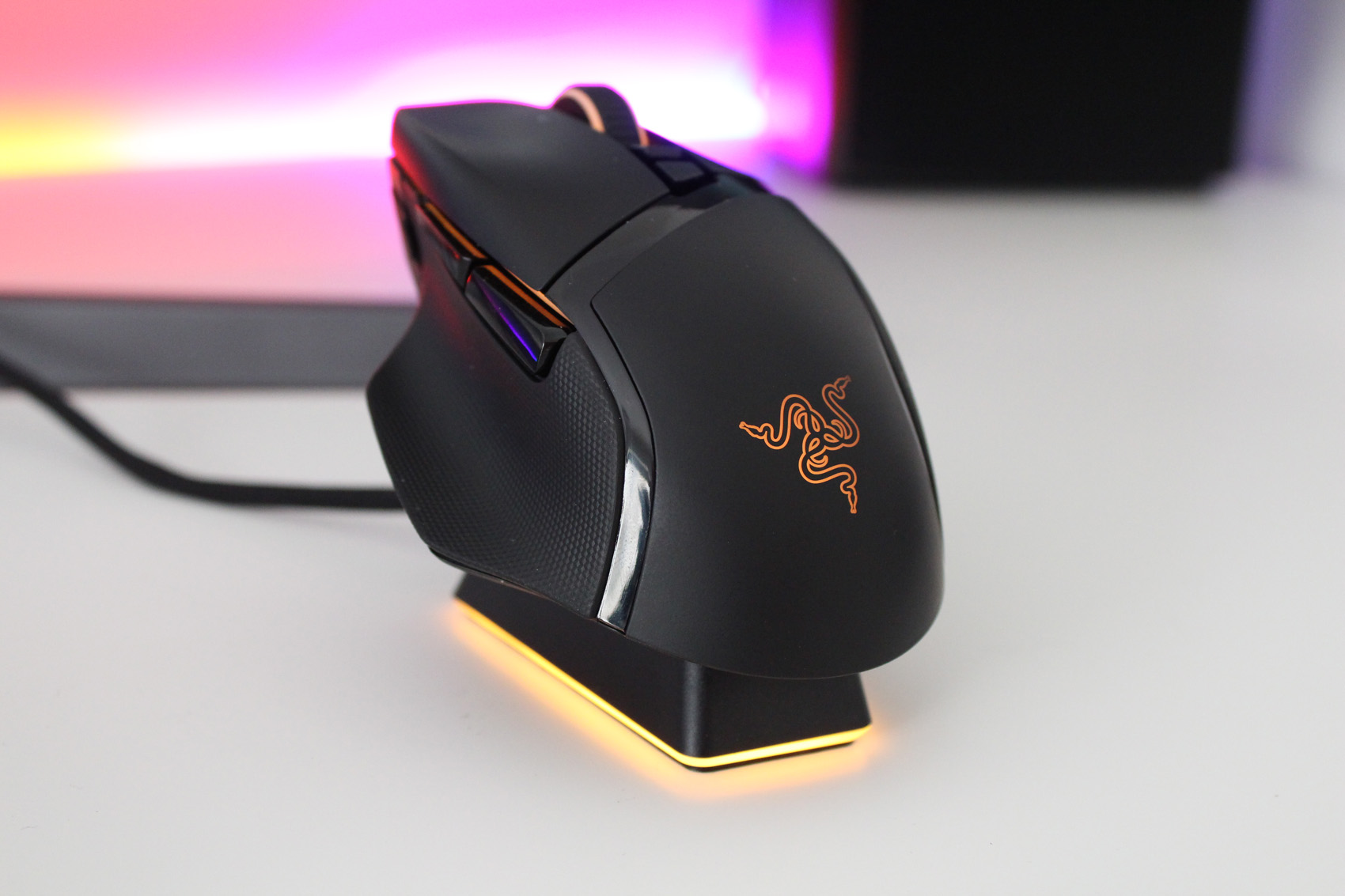 The Razer Basilisk Ultimate Wireless Gaming Mouse with charging dock is available now. You can pick it up for A$249.36 from Amazon, or from JB Hi-Fi for A$279.00, or if you want to get it straight from the source, then you can buy from Razer’s online store for A$299.95.

For more information, you can head to Razer’s dedicated site for the Basilisk Ultimate. 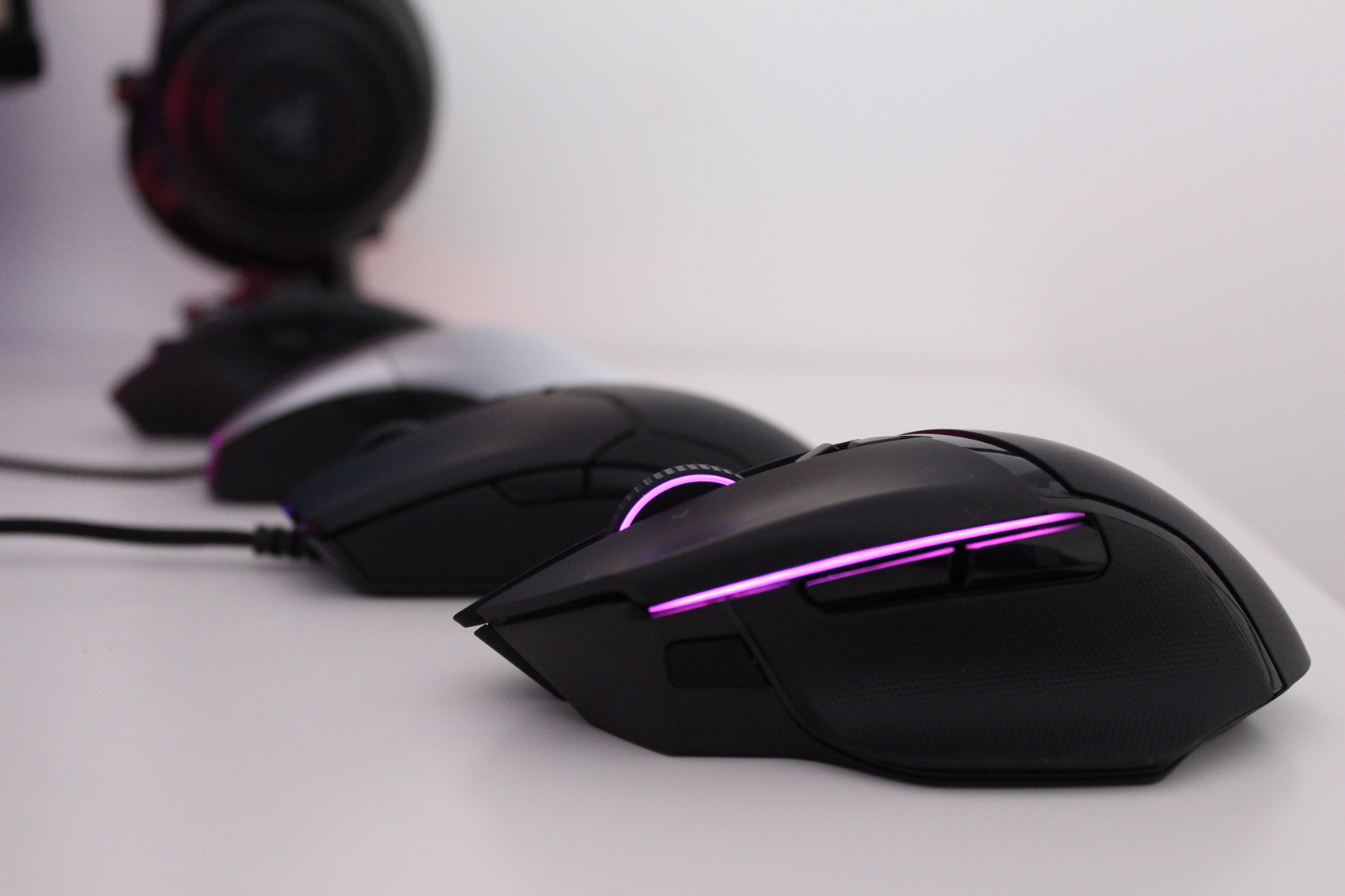 I really love this mouse, way more than I thought I would. After recently reviewing the Razer Viper, I found many issues, but they were all addressed with the Basilisk Ultimate.

From the new, comfortable design (for right handers) the linear control over your scroll wheel resistance, customisable buttons and that amazing RGB control, this mouse really has it all in terms of usability and customisability.

I absolutely love the configurable colour warnings when your battery gets low, this shows Razer understand the issue and have a great solution to the problem. While some absolute minamalists may not like the dock positioned on your desk, it is possible to hide this away in a desk drawer for when you need to charge.

In terms of performance, I found switching between the desktop DPI rate and the Gaming DPI rate to be easy and easily configurable. I can’t think of a reason when I’d need 5 levels, or that insanely fast 20,000 DPI, but its great to have it in case there are pro users out there that find their way to this mouse.

Overall its one I can highly recommend, it’s easily the best mouse I’ve used all year, so hopefully you find one under the Christmas tree this year.

Jason Cartwrighthttp://techau.com.au/author/jason/
Creator of techAU, Jason has spent the dozen+ years covering technology in Australia and around the world. Bringing a background in multimedia and passion for technology to the job, Cartwright delivers detailed product reviews, event coverage and industry news on a daily basis. Disclaimer: Tesla Shareholder from 20/01/2021
Previous articleNext round of Victorian Solar Rebates launch this Tuesday.
Next articleAUSkey is dead, replaced by myGovID – “It’s like having 100 points of ID on your phone”