Staying cool while you work is important as we head into another hot Australian summer, ensuring your home office is comfortable is incredibly important. There are times where you only need to cool one room of your house, so turning on the ducted air conditioning is an incredibly wasteful soltion. This scenario is being addressed by Evapolar.

The evaCHILL EV-500 by European-based Evapolar is a small, portable air conditioning solution that’ll keep you cool, without needing to cool the whole room, or the whole house. In a time where Australians electricity prices are so high, wasting large amounts of energy on air conditioning, is not the best deployment of your income.

Evapolar refer to this localised cooling as a Personal Microclimate and its a solution that could also work well in an office where often the temperature preferences of individuals differ greatly to that which is afforded by the building management system.

After spending a couple of weeks with the EV-500, it’s time to break down what it can do for you. 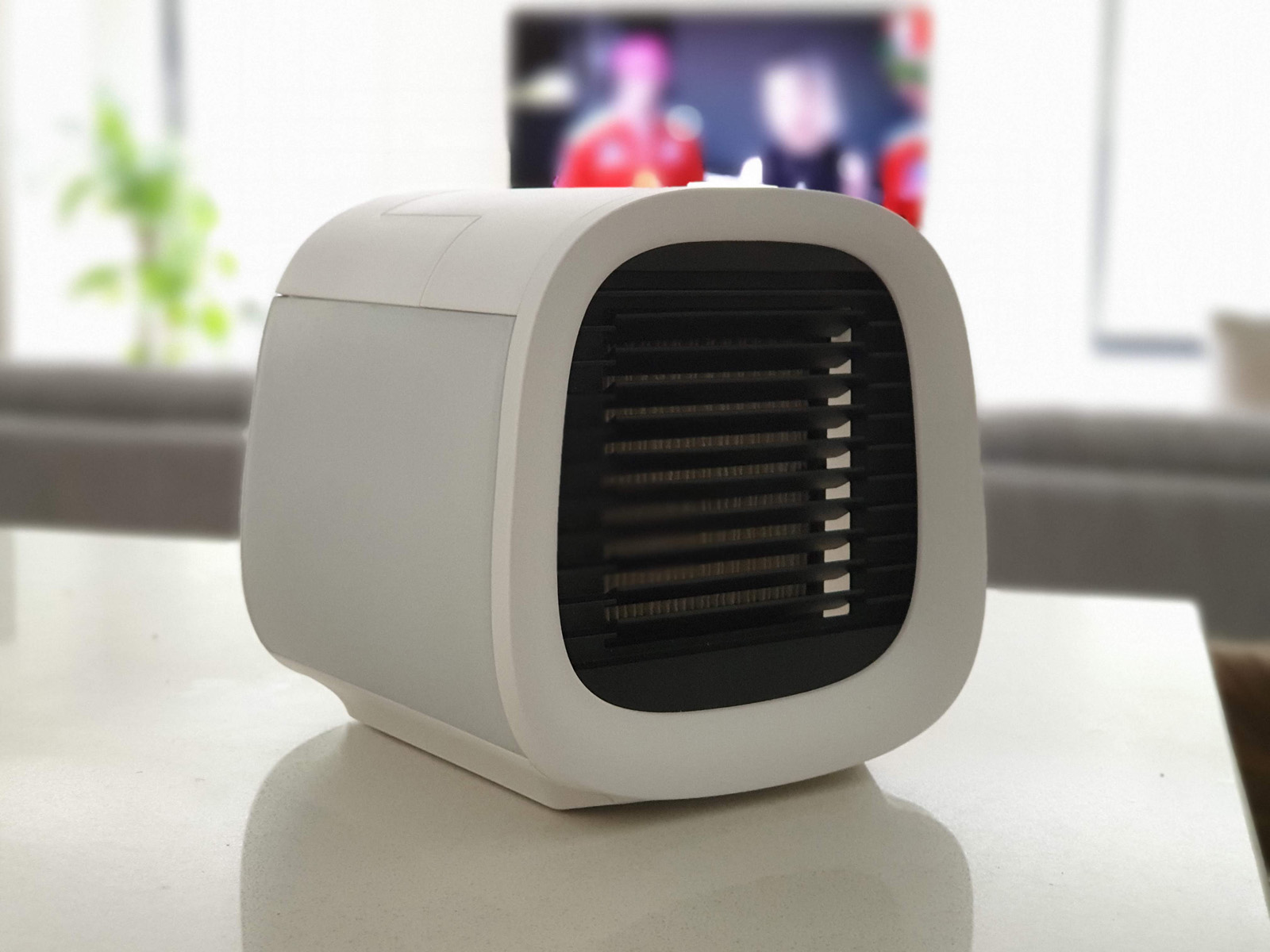 The device itself is small and light and is actually right at home on top of my Ikea Alex Storage unit. That loction is interesting, given it houses my PC. That speaks to the confidence I now have in the design that it won’t leak water into my expensive electronics.

When designing a product that needs to be portable, it makes lots of sense to integrate a handle into the design. That’s exactly what the team of engineers over at Evapolar did, allowing convenient pickup and go portability, usually to move to another room, or to take to the tap to refil.

Sometime you don’t want the air blowing directly on you, so the adjustable grill on the front of the device allows you to redirect the air up or down. I would have love to see a panning option, to simulate the effect fans offer, but more moving parts means more cost and weight, so I understand.

A key part of the design is its friendly, approachable and modern curves. There’s no hard edges here, as there are in so many other products these days. Inside that slick little exterior is a blue LED that illuminates the device and surrounding room.

For those of us who work well into the night, this is very much appreciated, as it aids in the fight against eye strain. I love that this can be enabled by pressing and holding the button, even when the air is turned off. This light also helps show the remaining water left inside, helping you decide when its time to add more water. 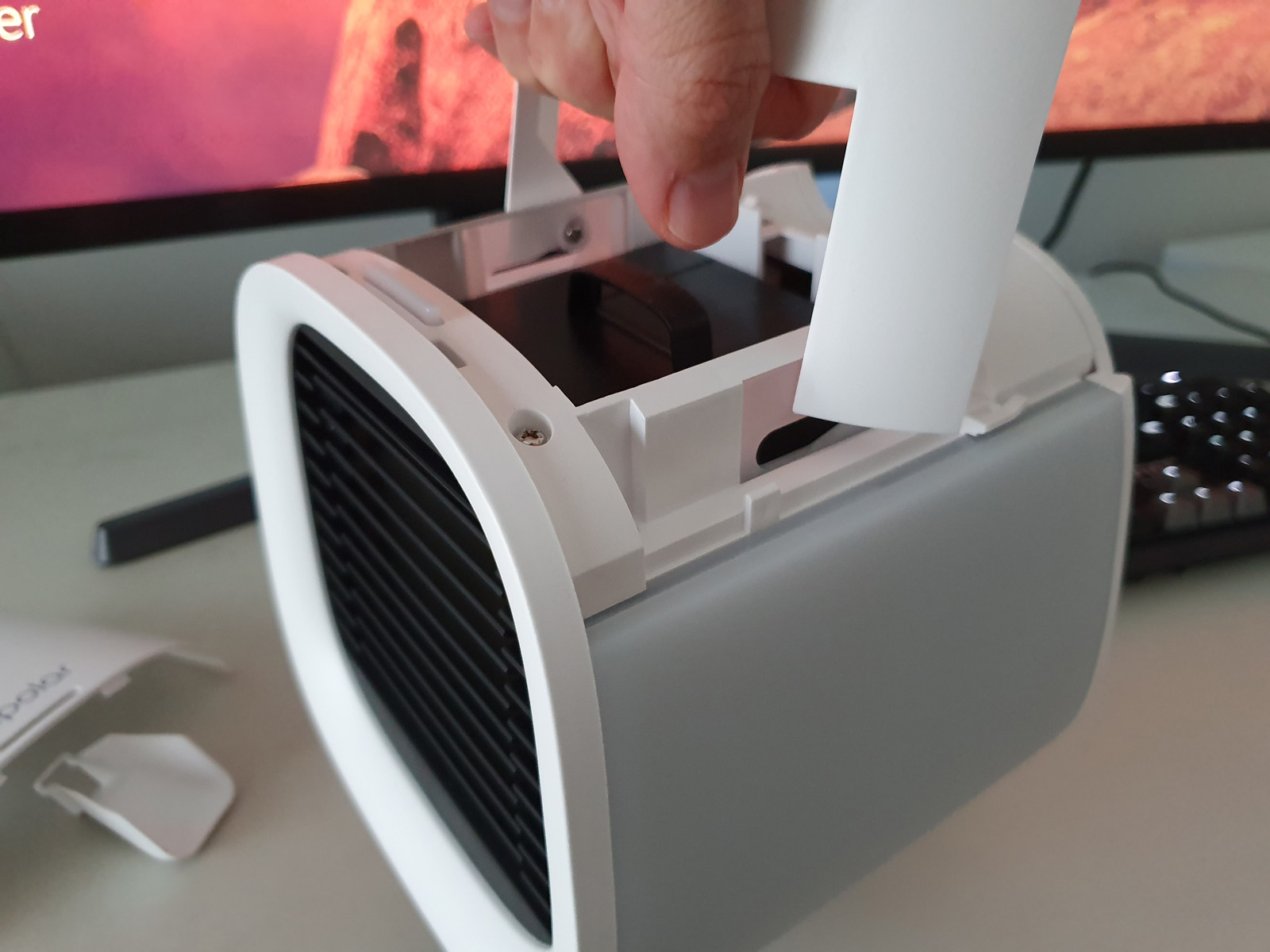 For a device that has a relatively simple scope of keeping you cool, the feature list is fairly impressive. It’s also worthwhile noting that the setup and operation of the device is super simple.

To get started, simply add water, connect the USB cable and press the button. Straight away you’re greeted with a nice cool breeze which is good for as much as 9 hours. That button can also be pressed to increase the rotational speed of the fan, moving more air per minute and also distributing that air further.

You see, the way the evaChill EV-500 works is to draw in hot air from the back of the device, the air passes through the cooling pads. As the air blows the water evaporates, which lowers the air temperature, while simultaneously saturating it with water. This is particularly beneficial on days with dry heat.

The evaCHILL leak-proof system means you could even consider taking this in your car to getaway destinations like camping. As we get into the warmer months, those camping in tents would certainly apprecaite some temperature relief. Being powered by USB, the device could be powered by one of those pocket sized power banks typically use to recharge your phone. The only condition is that the power supply must have an output of 5V and 2A. Thankfully even laptops can handle this, so if your laptop goes everywhere, so can the evaCHILL. 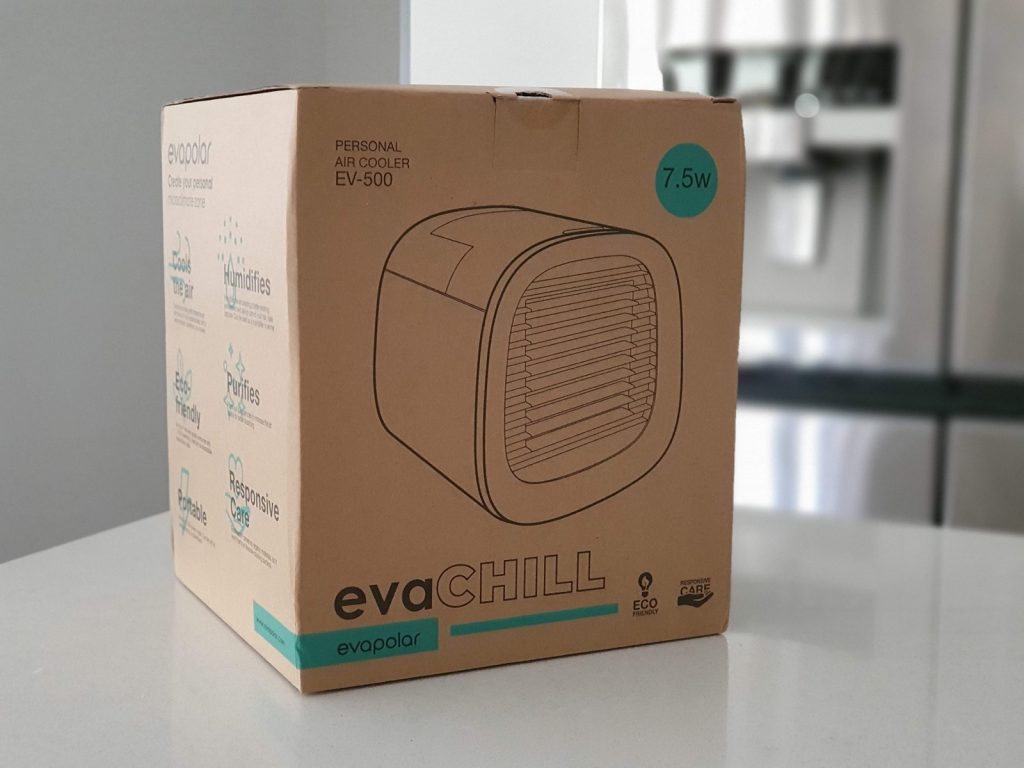 In terms of the performance of the device, it covers an area up to 3 meters. Generally I found myself sitting around 1.2-1.5m from the EV-500 and spent most of my time running on fan speed 2. This kept me cool, while still offering low-sound output. The noise is less than 50dB, even on the highest setting. The device weighs just 750 grams, yep, incredibly portable, even by a child. I know because my daughter wanted to try and at 18 months had no problem carrying it.

The water reservoir can hold 800ml of water which will generally last between 3-9 hours. As the EV-500 goes about cooling the air, it uses just 7.5W of energy, far lower than your standard air conditioning solution.

In terms of size, it is efficient, coming in at just 172 x 170 x 170 mm, but the curves actually make it appear even smaller. This is impressive given how much airflow is moving. 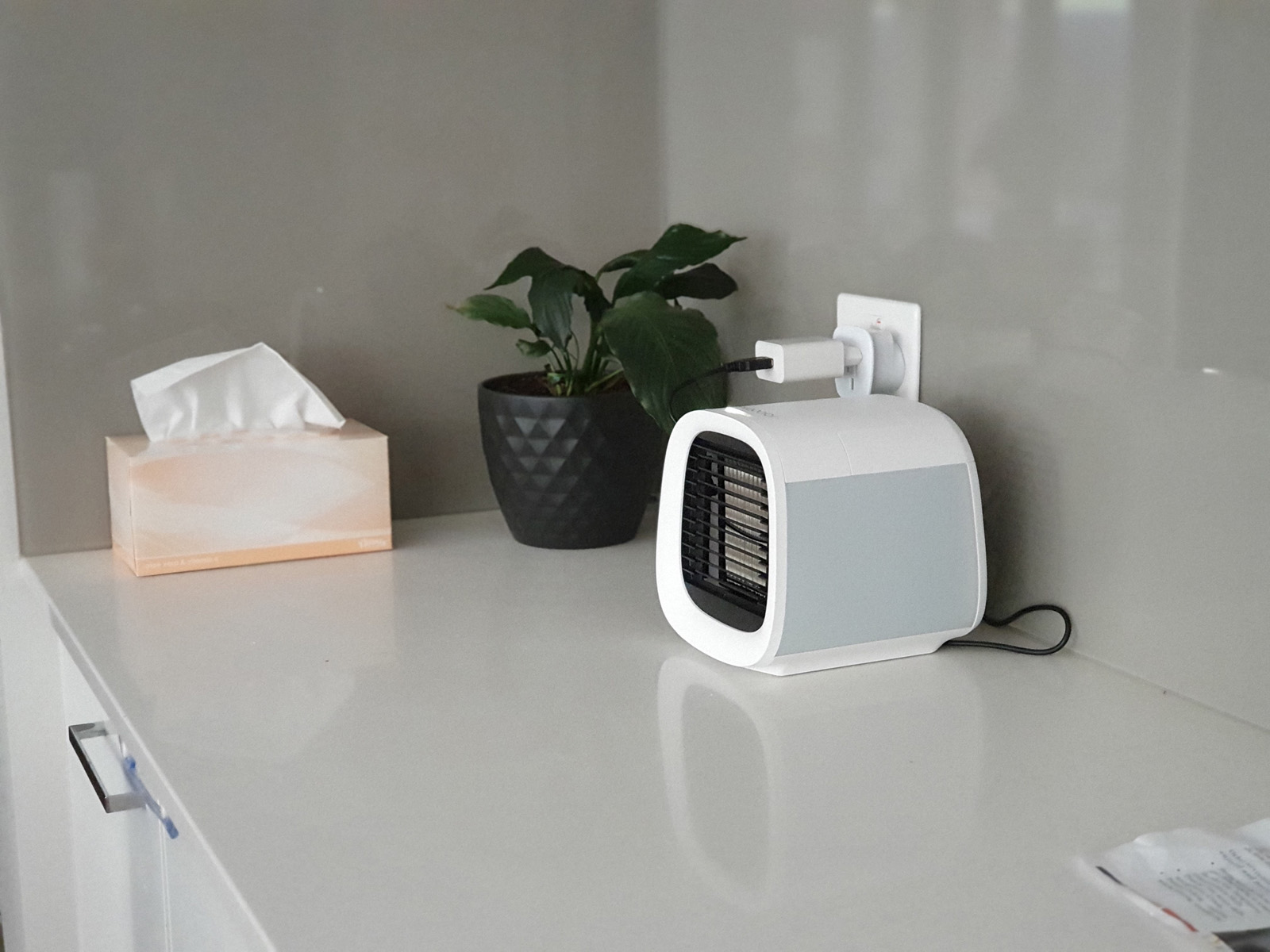 The device really works as advertised, so I have no problems on that front. My only feedback would be after I look down the product portfolio and see the more expensive products offering a digital touchscreen on top. If possible with the price point, it’d be great to see that added to the EV-500.

About my only other feature request, would be that the LED light be configurable in brightness. If you are planning on placing this in your child’s room, the light is probably too bright to act as a night light. 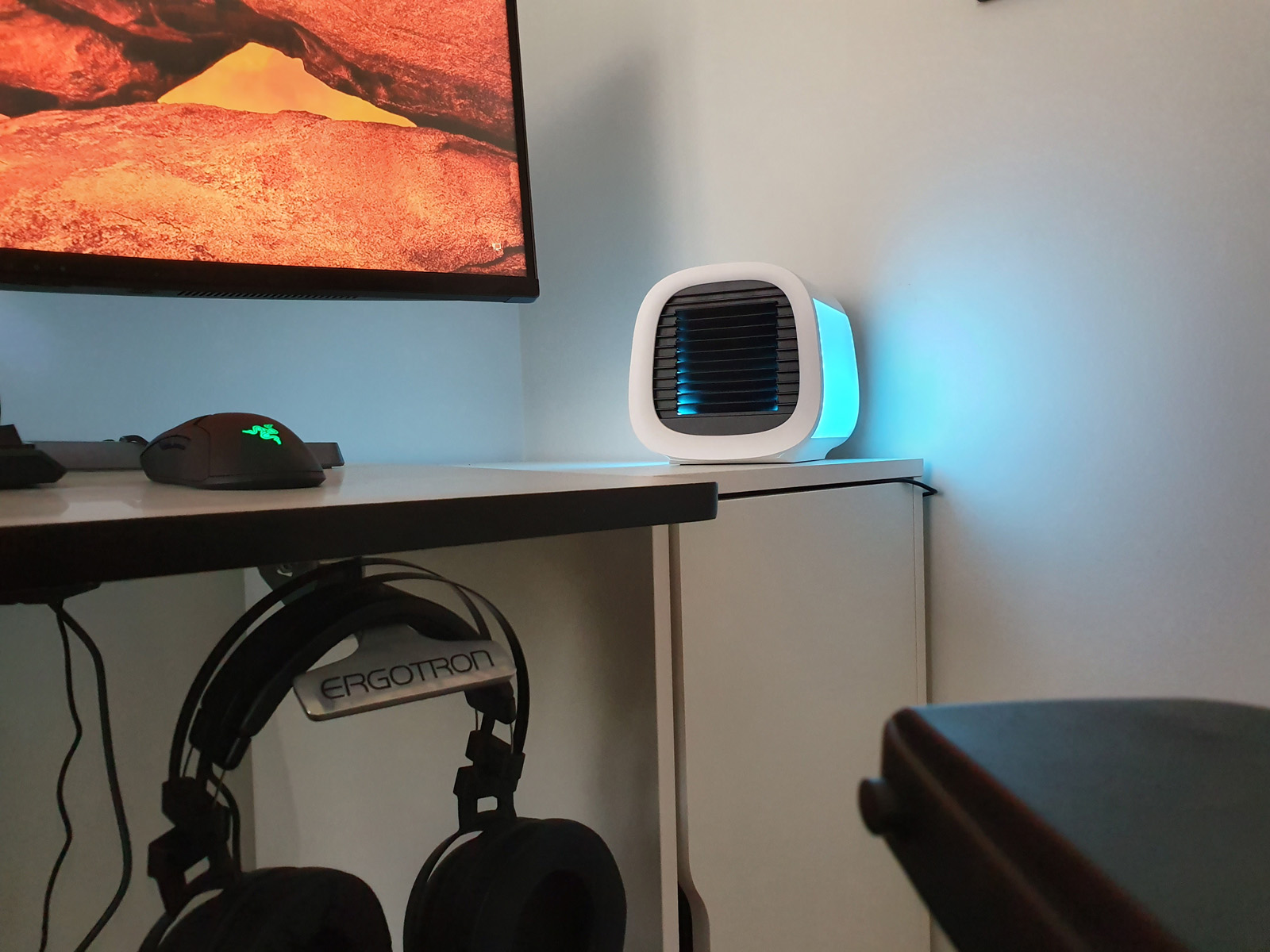 The Evapolar evaCHILL EV-500 is available now for A$149.00. It comes in a choice of two colours, Opaque White and Urban Grey, which you can select based on your personal taste and decor.

We’ve been able to secure a 10% discount for techAU readers, just use this link to head to the checkout to get the discount.

The evaCHILL has all 3 the most important features which are cooling, purifying and humidifying the air around it. The product is available now from Evapolar direct or from a number of Australian resellers like Office Works and Kogan.

The device comes in 2 colours, Opaque White or Urban Grey. Personally I really love the white eiditon that I reviewed over the photos of the Grey, but like the colour of a car, its a very personal decision.

At a cost of A$149.00 it represents great value for those after a portable air conditioning solution. At that price, you could grab a couple for different locations in your house, like your Office and your bedroom.

Deal
We’ve been able to secure 10% off for techAU readers, just make sure you use this link to buy. 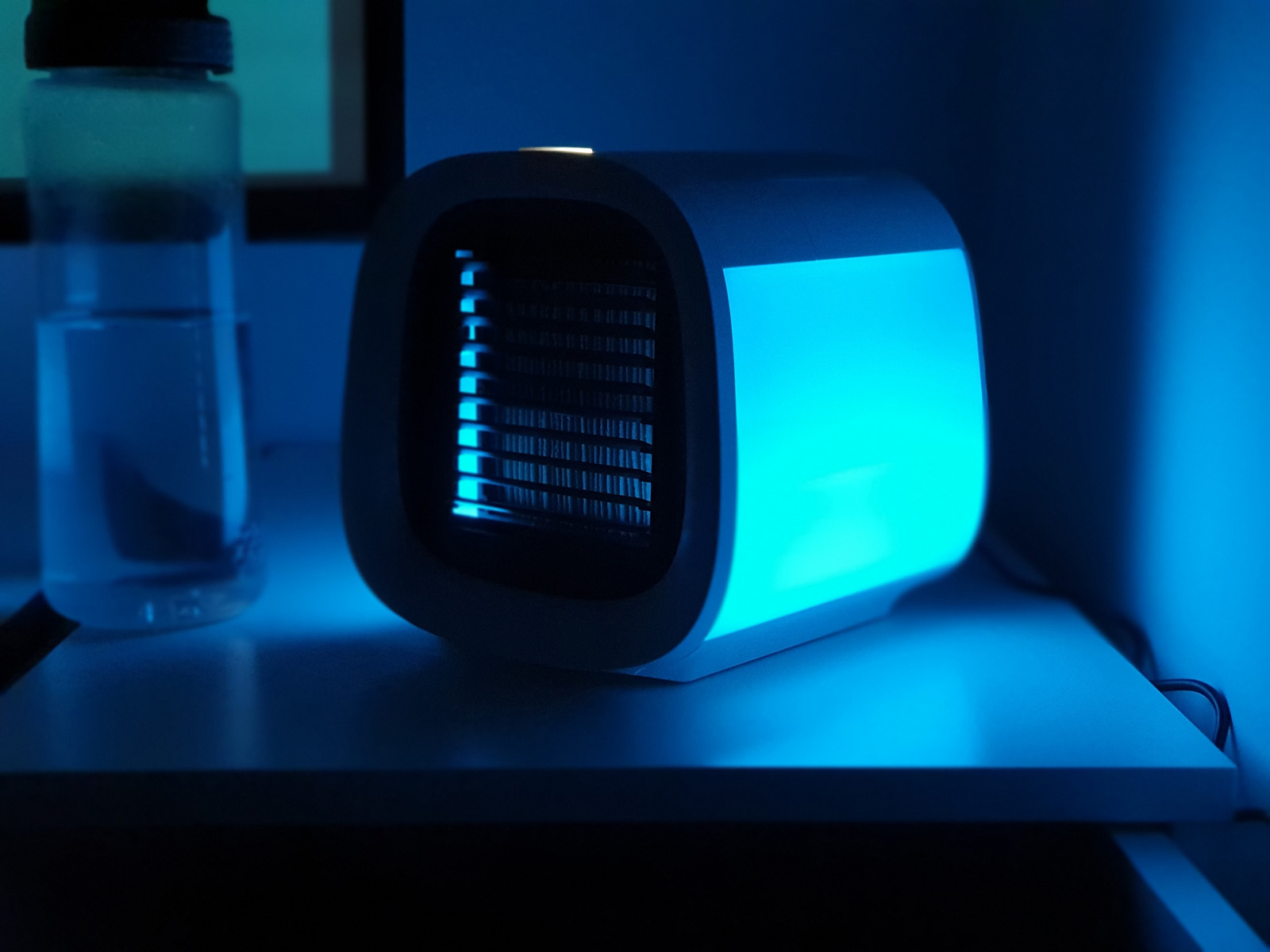 All things considered the evaCHILL EV-500 by Evapolar is a great little air con that’s light weight, portable and performs exceptionally well. The temperature can drop by as much as 15 degrees when using it. Personally if I’m in a 35 degree room, I’m not concentrating or operating to the best of my abilities, so cooling your room, or yourself appropriately is incredibly important.

I feel the price is right for the features on offer with this device, however there’s currently (at the time of writing), less than 100 units left in stock, so best to get a move on if you’re keen.

Honestly I didn’t expect to like this product as much as I do after using it. I’ve found it really beneficial so far, as I often work out of our home office which gets a lot of morning sun. The evaCHILL EV-500 can help keep me comfortable as I write and create content for techAU.

If you’re on the hunt for something a bit different to add to your Christmas list, a friend of family in the warmer parts of the country would certainly appreciate you got them an EV-500.

Jason Cartwrighthttp://techau.com.au/author/jason/
Creator of techAU, Jason has spent the dozen+ years covering technology in Australia and around the world. Bringing a background in multimedia and passion for technology to the job, Cartwright delivers detailed product reviews, event coverage and industry news on a daily basis. Disclaimer: Tesla Shareholder from 20/01/2021
Previous articleThanks VicRoads, but my Model 3 already has EV stickers, you should have known that
Next articleWhy did Google just drop $2.1 Billion to buy Fitbit?