When it comes to GoPro, you’re in one of two positions, either you already own one, or you wish you did. The action sports cameras have dominated the market and even as we close out 2018, they really still lack any serious competition.

Their latest line of cameras, the GoPro Hero 7, White, Silver and Black are serious upgrades over previous generations and that new Hypersmooth image stabilisation magic, combined with a range of other built-in features, means the time has come, upgrade or buy your first because the Hero 7 is amazing. 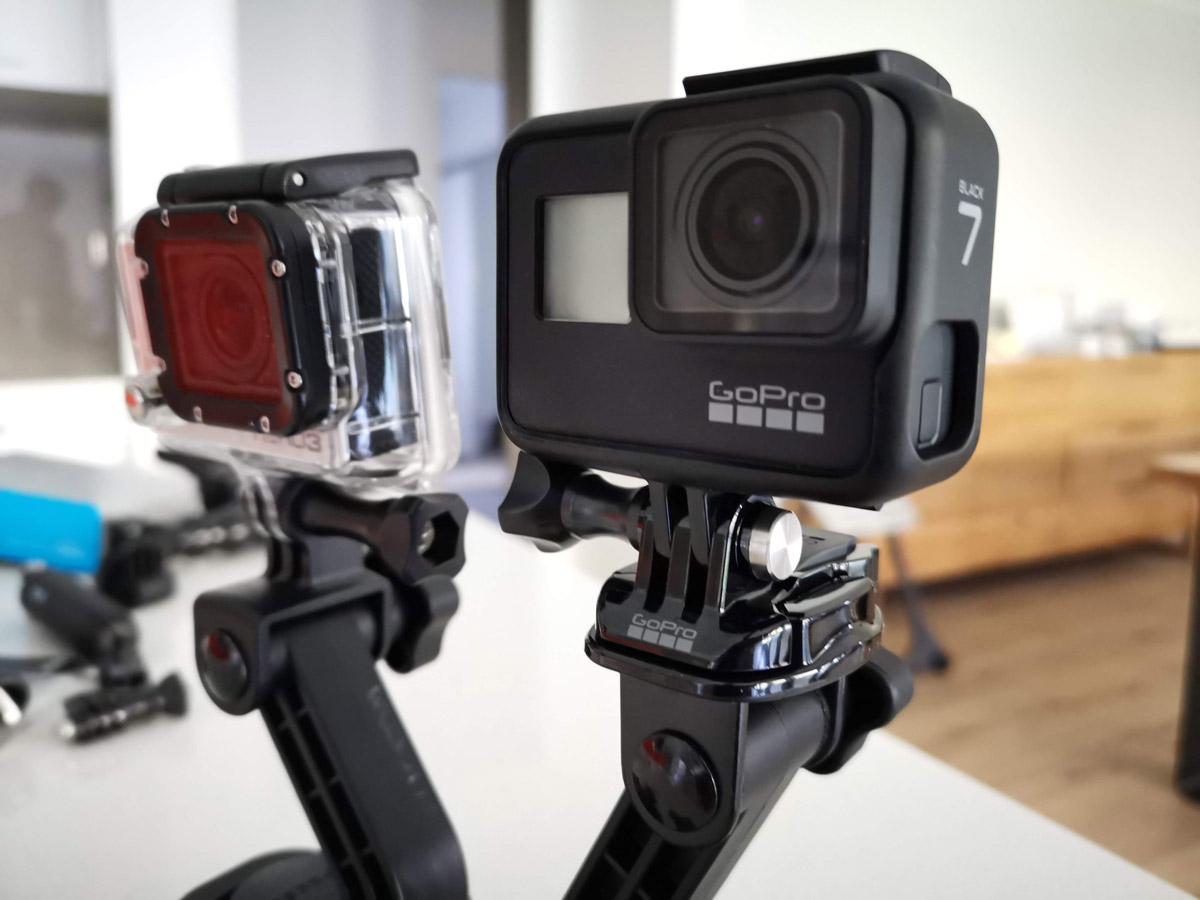 Is the design smart?

In designing the GoPro Hero 7, the company took a long hard look at the products they’d produced over the last few years. In planning this generation, they determined they needed to listen to their customers much more than they had in recent years. This means features like a waterproof body (up to 10m), without the need to buy an accessory, was built right into the Hero 7. This means everyone who buys a Hero 7 can use the camera in more environments, wet or dry.

During my time with the Hero 7 Black, I found myself at the beach, and at the pool where my daughter was taking swimming lessons. In both of these scenarios, the ability to use it and not fear it falling in the water and being destroyed was incredibly beneficial. You just have more confidence to use the GoPro, which means more people will want one and when you have one, you’re likely to take it with you more often.

In terms of the industrial design, the Hero 7 is a continuation of what GoPro are famous for. High quality footage from a really small package. The body comes in 3 different colours, white, grey and black, but these are also aligned to different product features.

Over the years I’ve used a number of GoPros and it was really only with the Hero 7 that I decided to pull the trigger on entering the accessory world. This time I purchased a suction cup mount, a Jaws Flex Clamp Mount and a portable tripod. It’s only with an array of accessories like this (and using it to film car reviews) that you really appreciate the design of the quick release mounting mechanism for GoPros. This enables you to quickly go between different mounts in seconds, rather than the traditional screw technique that takes minutes. It’s so universal that there is a way to mount the GoPro on practically any surface, in any orientation, which is part of the reason why GoPro has this market to themselves.

In terms of the body, it’s a very simple design, just a matt black surround, power button on one side, record button on the top, lens on the front. There’s just 2 doors in the body, one at the bottom to switch out the battery or microSD card and the other that allows USB-C charging or file transfer, or the ability to connect a Micro HDMI port to watch your footage back on the big screen. This works great if you’re in a motel room and want to review you’re day’s footage.

It’s not surprising GoPro didn’t vary from the design of the GoPro Hero 7 dramatically from previous generations, it’s a winning formula, just updates to the features where it matters most. 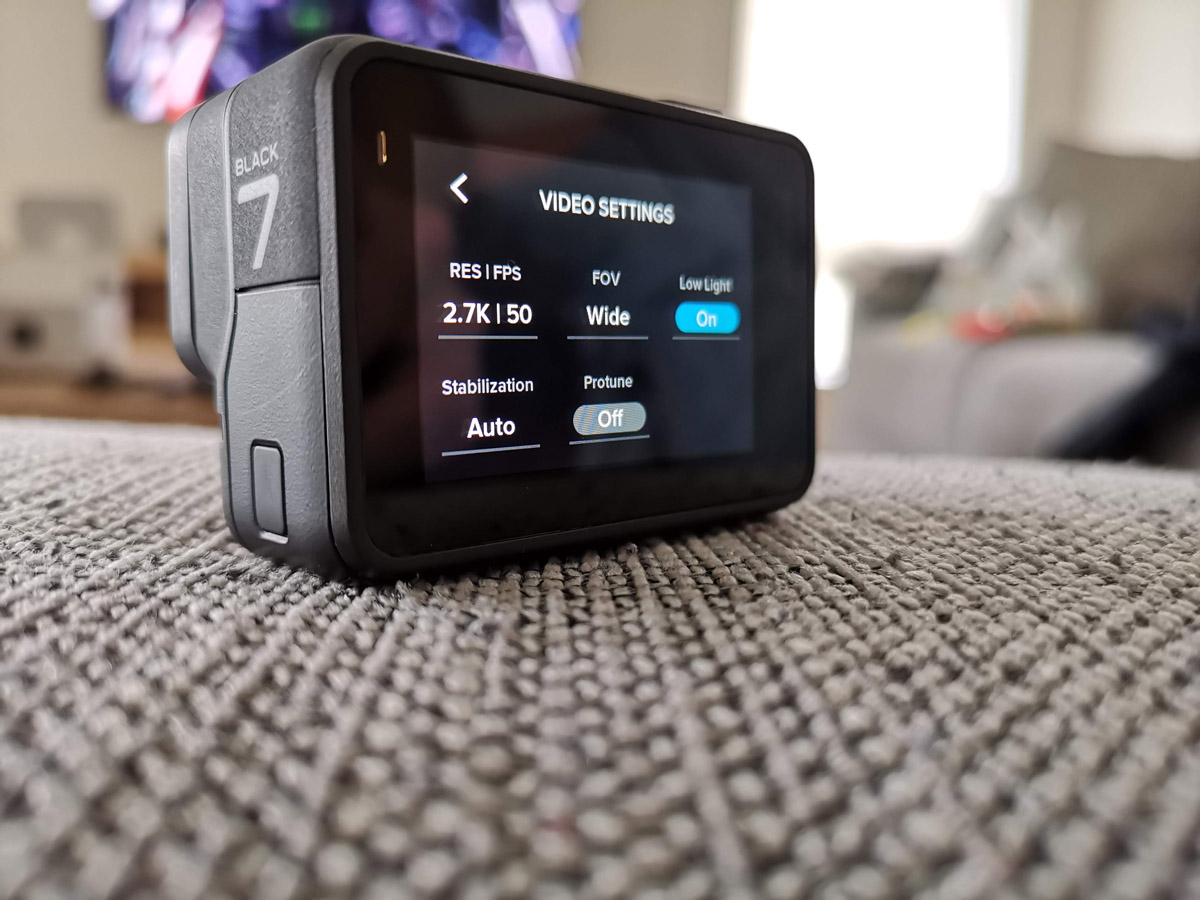 What’s it going to do for your life?

Without a doubt the headline feature of the Hero 7 is the new GoPro, proprietary technology to stabalise your footage. Known as HyperSmooth, the in-camera video stabilization avoids the need for another powered accessory in your life. While gimbals have been necessary to date, they really aren’t anymore, once you have a Hero7.

After using the Hero7 in a number of environments, its actually kind of magical to just use the camera and know when you watch back the footage, it’ll look like it was shot on a hollywood set with equipment worth hundreds of thousands of dollars. The way this works is to crop up to 10% of your footage, using the room between the edge of the frame and that 10% margin to digitally reposition the footage frame by frame, so the resulting footage looks, as the name suggests, hyper smooth.

A few things you should know about the quality settings and Hypersmooth stabilisation. It’s not available if you shoot in 4:3 aspect ratio. That was fine with me, I always shoot 16:9. There is a standard stabilisation available, but that’s no different to what’s in a Hero 5 or 6. Hypersmooth is available in 4K quality at either 25fps or 50fps.

The other thing to remember is the FOV or field of view setting. Hypersmooth is available on Wide for 2.7K and 4K, but to use the camera in Linear FOV (or non-fish eye), then you need to drop to 1080 50fps. I may be unique here, but I would love to use the GoPro to shoot regular footage and want to avoid the distortion created with Wide and SuperView FOV modes.

With HERO7 Black, GoPro is also introducing a radical new form of video called TimeWarp. TimeWarp Video applies a high-speed, ‘magic-carpet-ride’ effect to your videos. Imagine a scenic drive, ocean dive or walk through the city compressed into a super-stabilized, sped-up version of itself, with the entire experience playing out in seconds. TimeWarp Video transforms longer experiences into short, flowing videos that are compelling to watch and easy to share.

And when it comes to sharing, there’s no faster way to do it than live. HERO7 Black is the first GoPro to live stream, enabling users to automatically share in real time to Facebook, Twitch, YouTube, Vimeo and other platforms internationally. The result is an exciting and convenient way to share life’s more interesting, on-the-go moments.

Once enabled, you can command your GoPro with your voice. In the world of smartphones and digital assistants in your home, we’re all becoming more familiar with talking to our gadgets and GoPro are embracing it. You can simply say commands like ‘GoPro turn on’ or ‘GoPro start recording’, even ‘GoPro take a photo’. These commands are insanely convenient when you get creating with mounting the device. Personally I’ve had it mounted inside a car on rear windows that I can’t reach from the front seat. Being able to use voice to start it recording is a great inclusion. For those taking photos using any kind of mount, it ensures you don’t touch the device and blur the photo, it also lets you take photos with friends and avoid having to risk a stranger holding your GoPro. This is supported in 14 languages and yes, Australian english is supported.

“HERO7 Black is the GoPro we’ve all been waiting for.”
GoPro’s founder, Nick Woodman 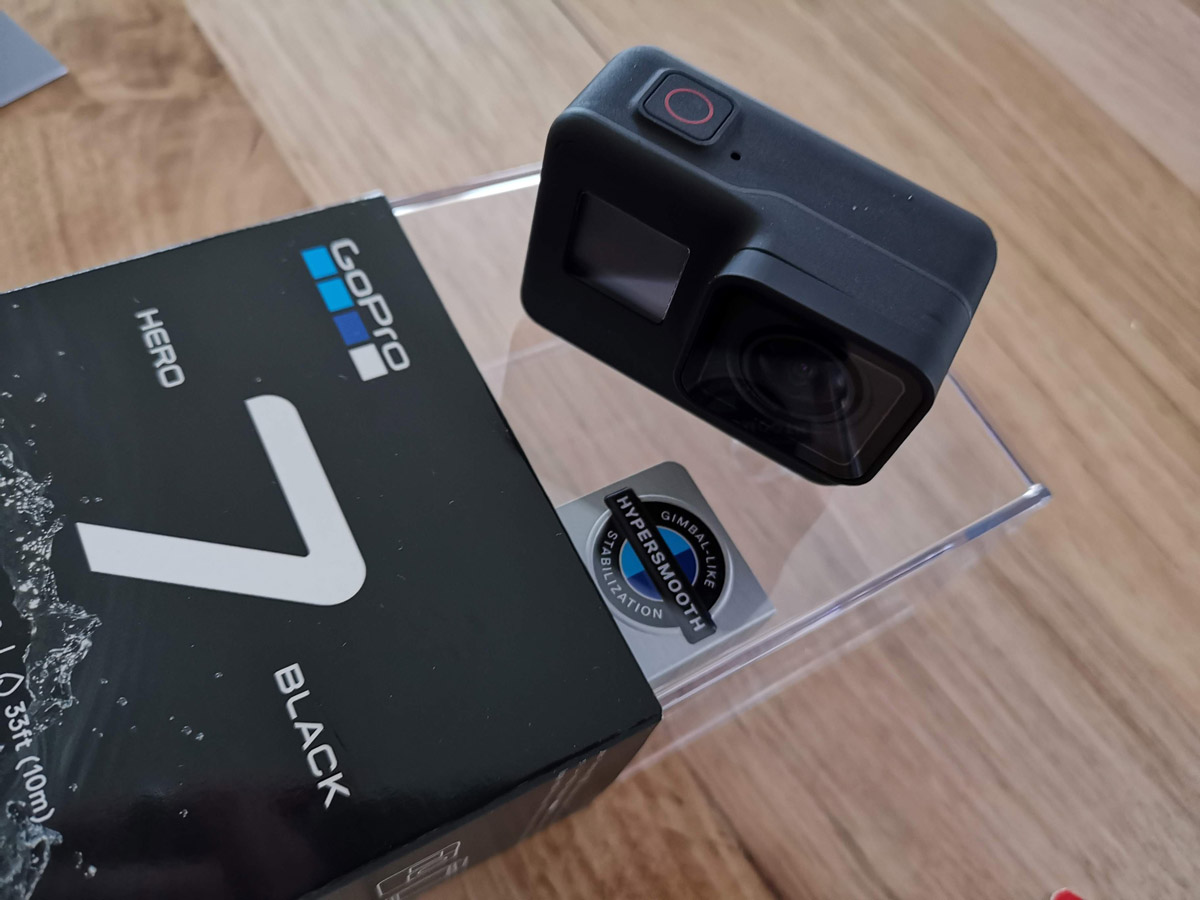 There’s very little wrong with the GoPro Hero 7 Black, only a few suggestions of how a great device, could be a brilliant device. The Hero 7 features live streaming to platforms like Facebook, YouTube, or a custom RTMP Stream. This requires the use of the mobile app, which I understand helps to simplify things like account entry when first setting up. What I’d like to see is Live Streaming simply added as a mode the camera can enter using the mode selection button, this simplicity would likely see more people using it, more often.

My only other complaint is that the FOV has to be set to wide for Hypersmooth. In future revisions, I’d love to be able to use the GoPro in Linear mode, without lens distortion, to get closer to what you can shoot on a DSLR and really destroy that market.

Something that could be added with a software update is the ability to use your GoPro as a webcam. Given you’ve invested in a camera that’d more than most webcams, it seems like an easy feature to add and enable users to extract even more value from their purchase. When we’re honest, it’s not everyday you use a GoPro, its every now and then for special events. The in-between times it usually sits, unused on charge, ready for the next adventure. If there was a monitor mount for GoPro, with quick release, I’d happily snap the GoPro in and use it as a webcam.

My last complaint is just about the USB-C cable. While I have many USB-C cables available to me, the only one that connects the GoPro to the PC is the one included in the box. This cable should be no different than any other USB-C cable, but apparently there’s something special in it. This is a point of frustrating as you always need to take this with you to transfer the files. While you can transfer the files wirelessly, the size of longer 4K recordings means you’ll want cabled speeds. The cable is really short, like 50cm short, so if you had plans of wiring it neatly from your PC to an accessible place on your desk, forget about it. This needs to change and GoPro should allow any USB-C cable to transfer files and charge the device. 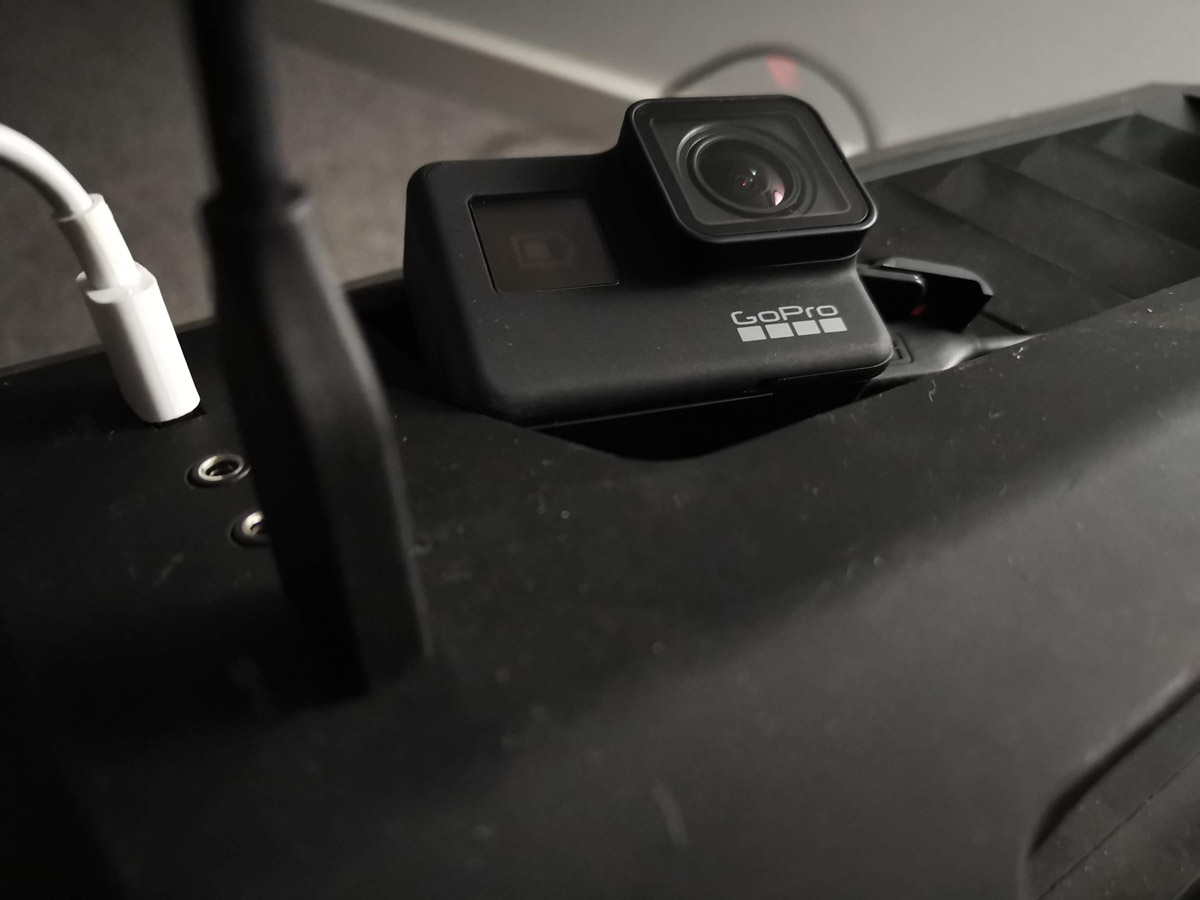 The GoPro Hero 7 is available now from GoPro’s website directly or your favourite online or electronics retailer. 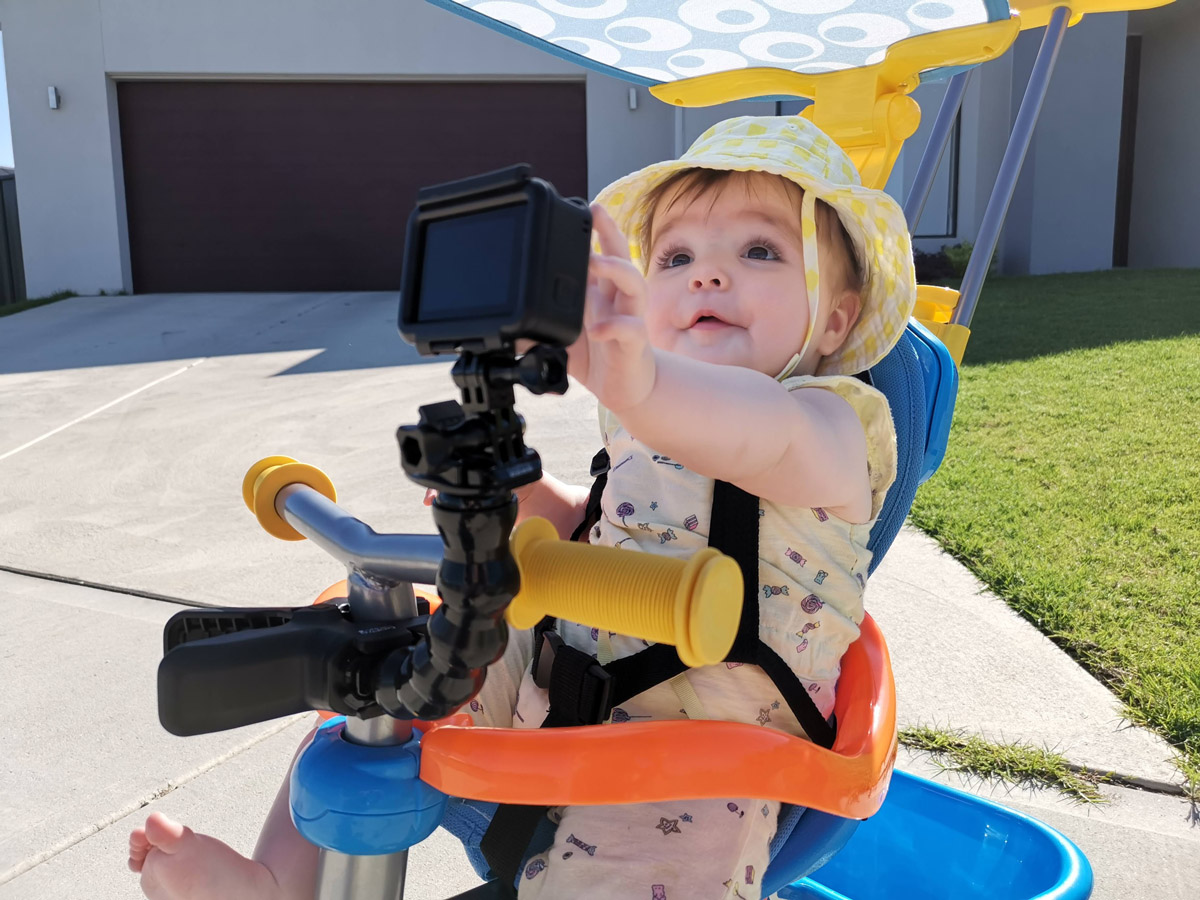 The challenge for GoPro is to get existing GoPro owners to upgrade. I believe this generation represents a big leap forward with USB-C connectivity, Live streaming support, waterproof body and the new Hypersmooth stabilisation technology that draws a line in the sand between those who have Hero 7 and those that don’t. It really is that significant.

While GoPro have done a great job at addressing the issues raised by the community, their work is not done here. Live streaming should simply be a mode on the device, rather than requiring the mobile app. As high end cameras and movie production turns to 8K quality, this isn’t the end of the story in terms of quality either. It’s easy to imagine users wanting 4K Hypersmooth at all field of views, higher frame rates and yes, higher quality.

In terms of an upgrade a single number bump here almost doesn’t seem enough to represent the dramatic step in functionality. If you have a GoPro, you’re already sold on the need for one, it’s time to save your dollars and upgrade. If you’ve never owned a GoPro before, now is one hell of a time to get on board. My advice is to avoid temptation to cheap out and grab an older model, stretch the budget, pay for the best, you’ll be glad you did, so you can capture your amazing life’s events that happen in this amazing world of ours.

Jason Cartwrighthttp://techau.com.au/author/jason/
Creator of techAU, Jason has spent the dozen+ years covering technology in Australia and around the world. Bringing a background in multimedia and passion for technology to the job, Cartwright delivers detailed product reviews, event coverage and industry news on a daily basis. Disclaimer: Tesla Shareholder from 20/01/2021
Previous articleUnboxing Next Level Racing’s GT Track racing sim
Next articleLG’s 2019 soundbars have Google Assistant built-in