Review: Huawei Mate20 Pro should be your next phone

Huawei have a new flagship phone and it’s brilliant. Building on the success of the P20 Pro and the Mate 10 Pro last year, the Mate 20 Pro features an absolutely stunning full-face display with curved edges.

Built right into that gorgeous 6.39″ OLED display (running 3120 x 1440) is a fingerprint reader, and importantly, it works great. Naturally if you’d prefer, there’s a still a notch with the hardware to perform face unlock and that notch is done much more elegantly than the Pixel 3 XL.

With recent flagship releases from Google and Apple, there’s a lot of competition for your hard earned dollars. While the Huawei Mate 20 and Mate20 Pro has just been officially announced, I was lucky enough to get early access, so here’s my thoughts on the latest from Huawei. 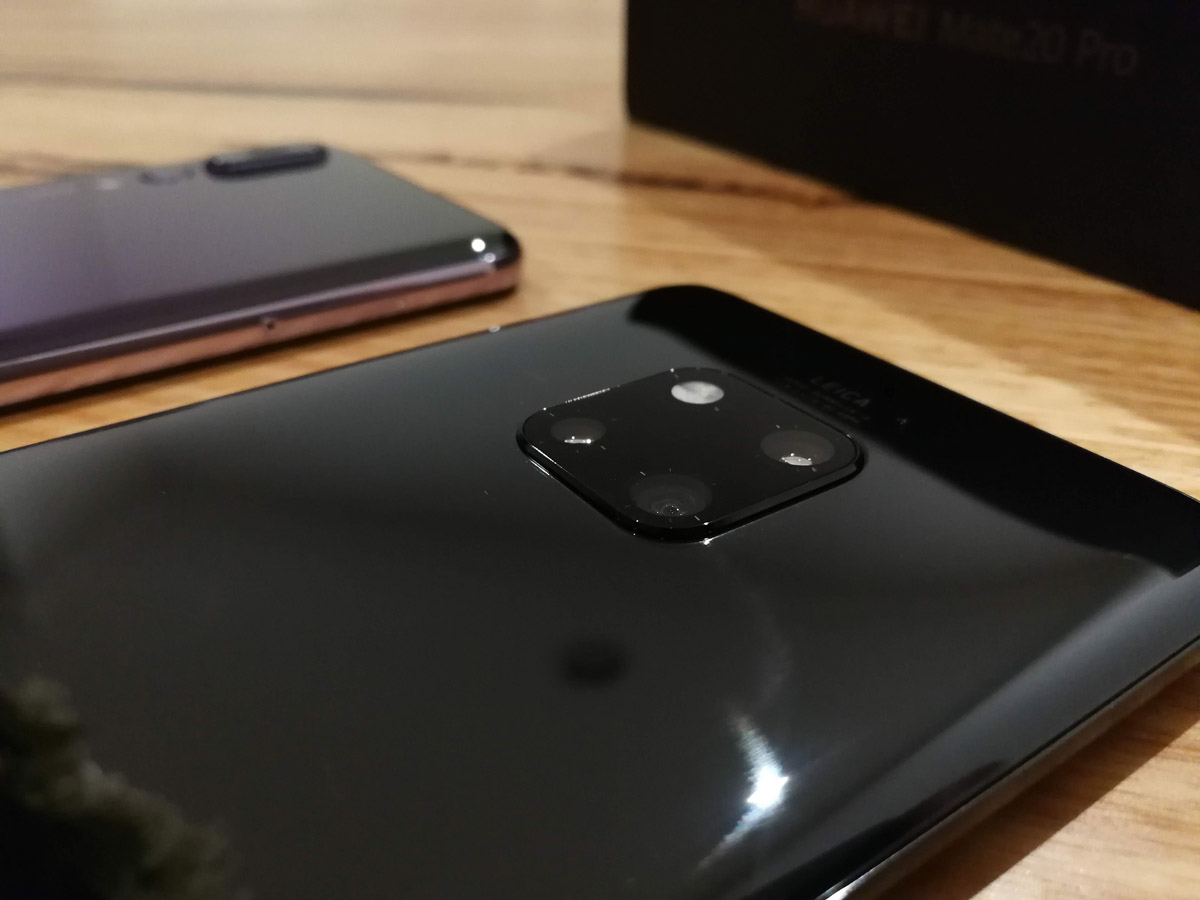 In terms of cameras, this phone has an incredible array of hardware and software that combine to produce absolutely stunning photography and videos. On the back of the phone we get a very distinctive quad-array of circles in a 2×2 grid.

These are made up of an LED flash and a triple Leica camera featuring a new Leica Ultra-Wide angle camera for expansive wide angle shots, it also solves the long-term struggle with close ups, with the ability to pull off macros from as little as 2.5cm.

Thanks to some software magic that Huawei’s been doing for years now, you can modify the depth of field after the photo has been taken. You can also film at 960fps in 720p or 120fps in 1080p.

The Mate 20 and Mate 20 Pro supports 21:9 photo and video capturing natively. That’s important to those who have invested in 21:9 displays who now have a great capture device to create amazing content for them. The other reason you’d want that is to achieve that full cinematic feel on your videos.

Something I wasn’t prepared for is just how much I’d love the 0.6 wide angle zoom. It’s surprising how often you find yourself at a desk or in close proximity to an object you want to capture and being able to move from 1x to 0.6 is actually a great inclusion and allows you to capture a field of view, closer to what you actually see.

If you find yourself with the opposite challenge, like not being able to physically get close to something, you need to zoom in. The Mate 20 Pro, has a massive 5x optical zoom (aka Hybrid). This level of zoom is basically unheard of (iPhone only has 2x). This isn’t perfect right to the end of optical zoom threshold, with some degradation of image quality visible, but significantly improves over other devices which quickly run into digital zoom. 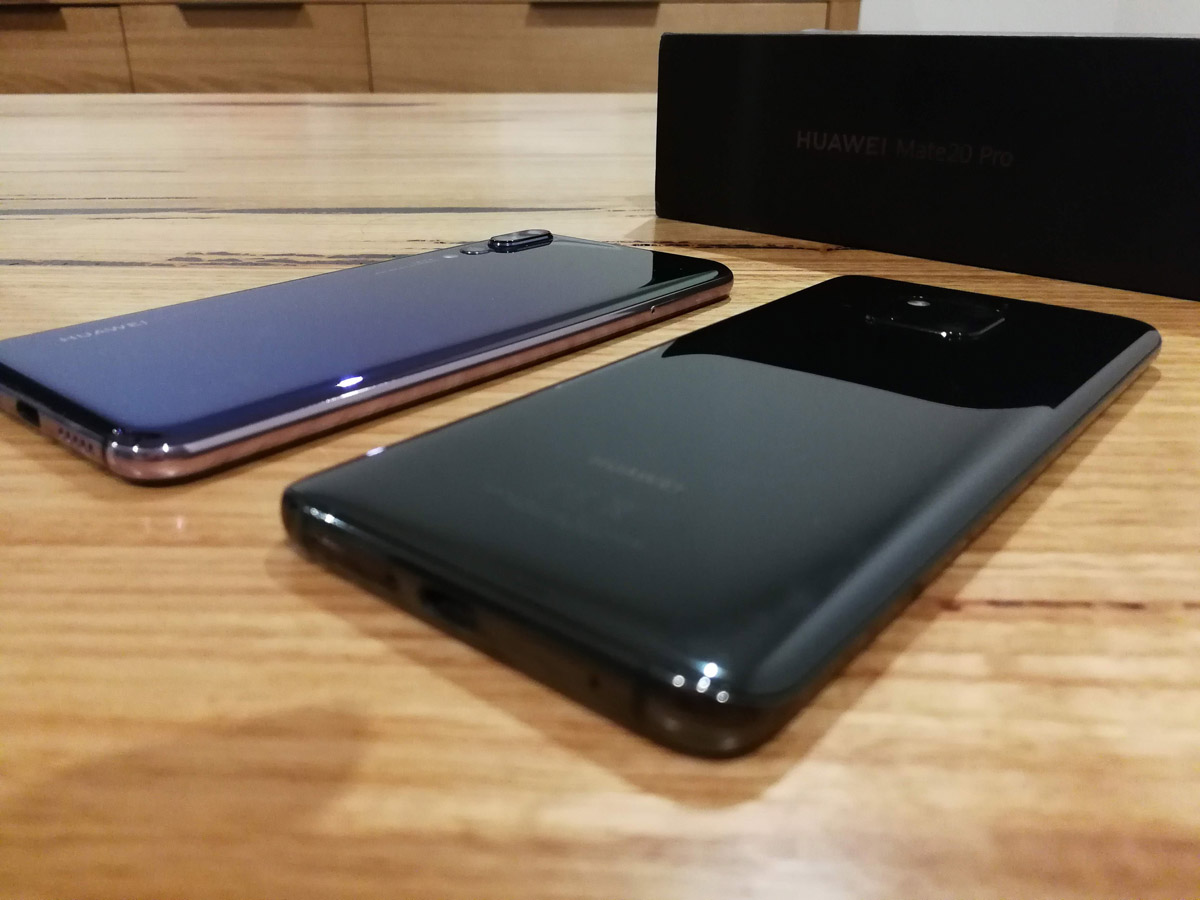 The Huawei Mate 20 Pro represents a fantastic matching of hardware and software and as such the user experience is delightful. Everything you do is exceptionally fast and snappy, helped largely by the latest OS, as well as the Kirin 980 processor (that’s a 7nm CPU/GPU SOC with 6.9 billion transistors), 6GB of RAM (I have 8 in this laptop) and as you download your applications, you’ll be able to store them on the 128GB of internal storage.

By way of comparison, let’s take a pretty fast phone, the Huawei P20 Pro which came out on May 18th.. and compare it to the Mate 20 Pro. Launching Pokemon Go, a game that typically suffers from horrendous load times and you’ll see the launch of the game is just so much faster on the Mate 20 Pro, in fact, it destroys the P20 Pro and I’d suggest almost every other phone on the market.

On the left you’ll see the P20 Pro launch Pokemon Go in around 32 seconds, while the Mate 20 Pro smashes it at just the 6 seconds. 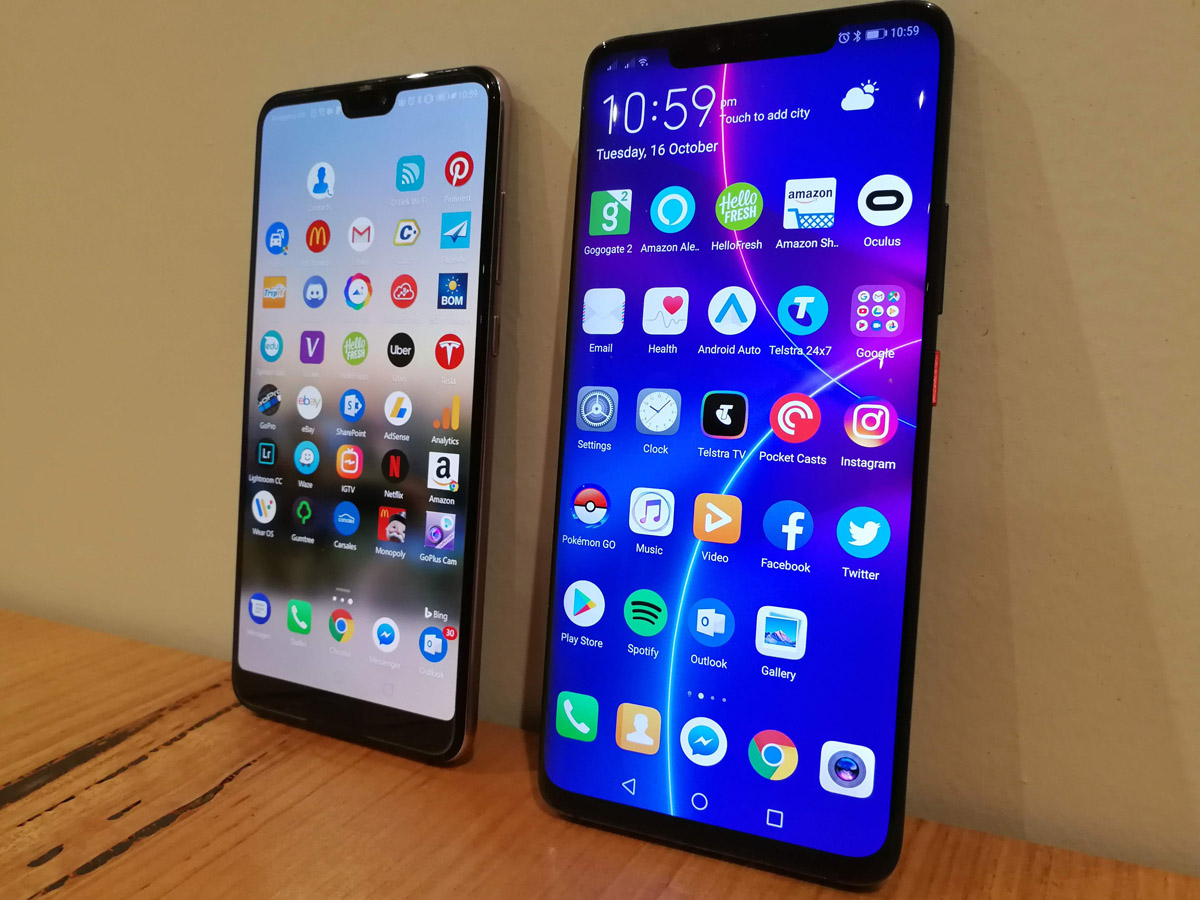 The latest of the latest.. Pie.

The phone runs of Android 9.0 Pie, one of only a few phones outside Google’s Pixel that runs the latest Android OS. Huawei’s customised EMUI also get bumped to version 9.0.

I particularly like the volume slider UI to the right of the display, right next to where your finger presses the up/down volume rocker. This enables 1-handed access to change your phone from ringer, to silent, to vibrate or use touch to adjust the volume.

Huawei’s customisation on Android won’t be for everyone, but to honestly, they’re pretty light these days and certainly don’t degrade performance. As always, if you prefer a different launch, change to it and that’s the beauty of Android as the base, you can change your phone to suit your personal preferences.

Personally I use a lot of Microsoft services, and like what the Microsoft Launcher has to offer. The ability to transform a device like this into what is essentially a Microsoft phone is truly impressive and ease the transition for anyone still living on Windows Phone. Whether you choose to live in the Google or Microsoft world, the fact you can set default apps for basically everything on your device, speaks to the flexibility of the platform. What this means for Huawei is that their customisations shouldn’t any turn off potential buyers. 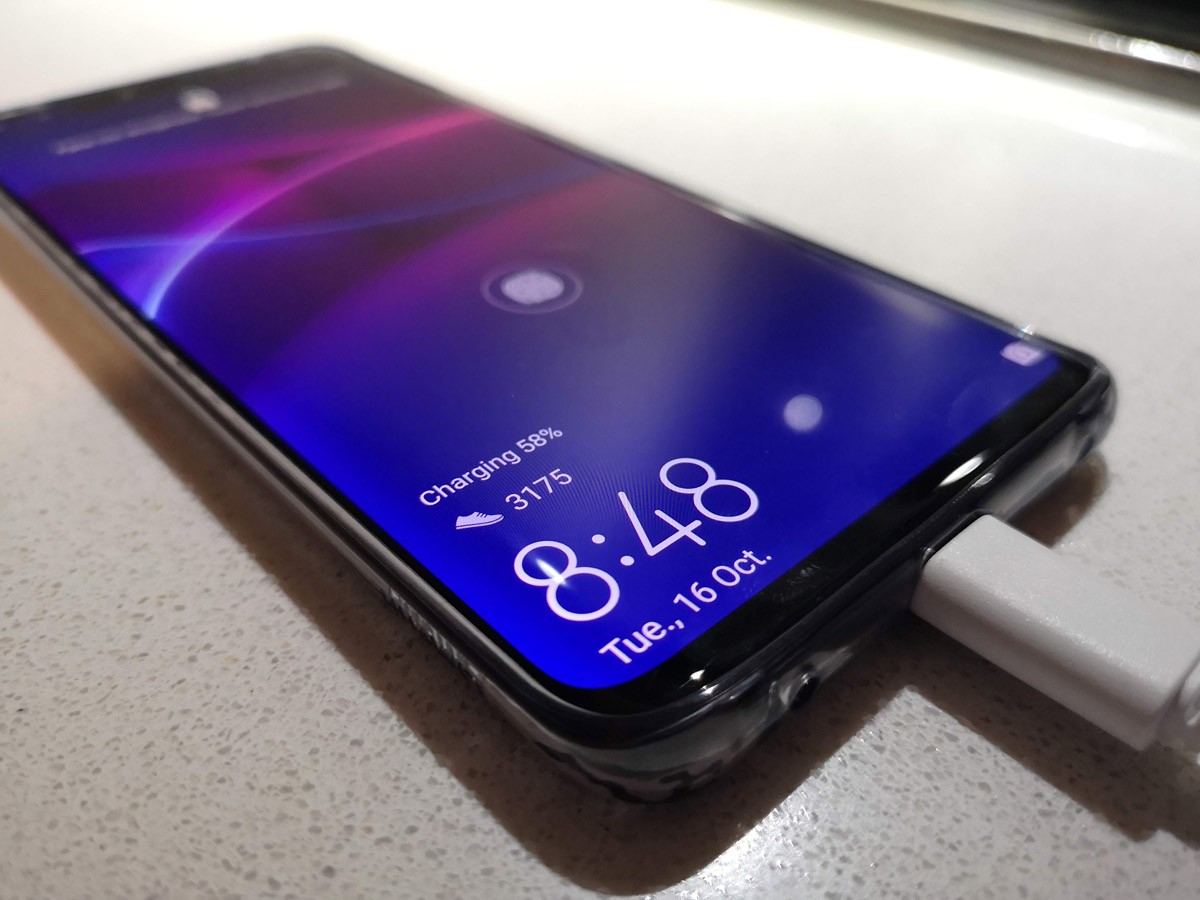 The battery life on the Mate 20 Pro is nothing short of amazing, with one of the largest batteries we’ve seen in a smart phone. With no less than 4,200mAh, you’d expect the phone to be an absolute brick, but in terms of weight you really can’t feel between this and other modern smartphones.

What you do notice is the extraordinary battery life you get from the device. After taking it off the charger at around 6am, it’s currently 7pm and I have 40 hours remaining. The killer is, that’s not even in power saving mode.. switch that on and it’d kill a few background notifications and I’d have 44 hours remaining. That’s insane for a phone with a display this large.

The Ultra power saving mode puts the phone into low-power and offers basic functionality like calls and texts, if I did that, I’d get a staggering 132 hours.. or you know, 5.5 days.. remembering that’s after more than 12 hours of use. Just wild. Huawei are now the battery gods of the smartphone worlds.

When it does come time to charge, of course there’s Huawei Supercharge technology (that’s 40W), available via their USB-C connector at the bottom of the phone. Huawei have worked out how to feed laptop-level power into your phone, to get you up to 70% charge from just 30-minutes’ charging.

If you prefer to go wireless, then you can pickup a free wireless charger with the Mate20 Pro as a pre-order special, which uses a 15W for a quick charge.

This phone has a unique feature, that enables you to provide power to another device from the phone, using it’s big battery for your other charging needs (like headphones etc). Better still.. Huawei have worked this technology into the wireless Qi protocol, so you can even wirelessly charge another device, meaning you could leave you cables at home. This is incredibly smart and I now want this everywhere. 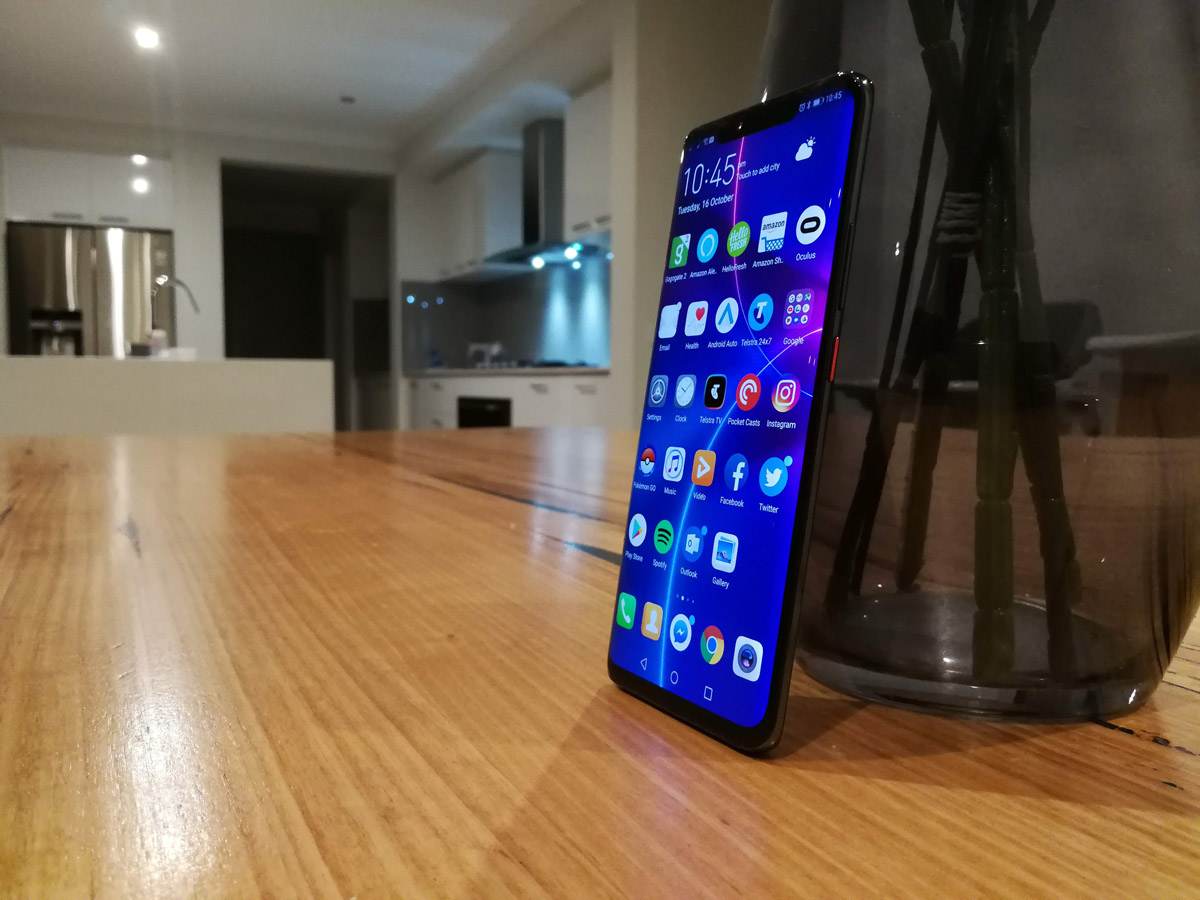 How much and when can I get it ?

The Huawei Mate20 and Mate20 Pro are available for pre-order today (Wed 17th October, 2018), and you can expect to get hands-on from the 1st of November.

As the Mate20 Pro is Huawei’s new flagship device, it comes with a premium price, sitting at healthy, yet still affordable by 2018 smartphone prices, of RRP of A$1,599.00. It’s available in Black and Midnight Blue colours. The Black is exclusive to Vodafone, while the Midnight Blue is available from other retailers.

The baby brother is the Huawei Mate 20 and that arrives for an RRP of A$1,099.00. This one is available in just a single colour, Black, so I hope you like black.

The pre-order offer will be available through Optus, Vodafone, JB Hi-Fi, Harvey Norman, Mobileciti and Kogan and will apply to pre-orders made from 17th October 2018 until 31st October 2018 (T&Cs apply). To redeem and for details head to www.huaweipromotions.com.au 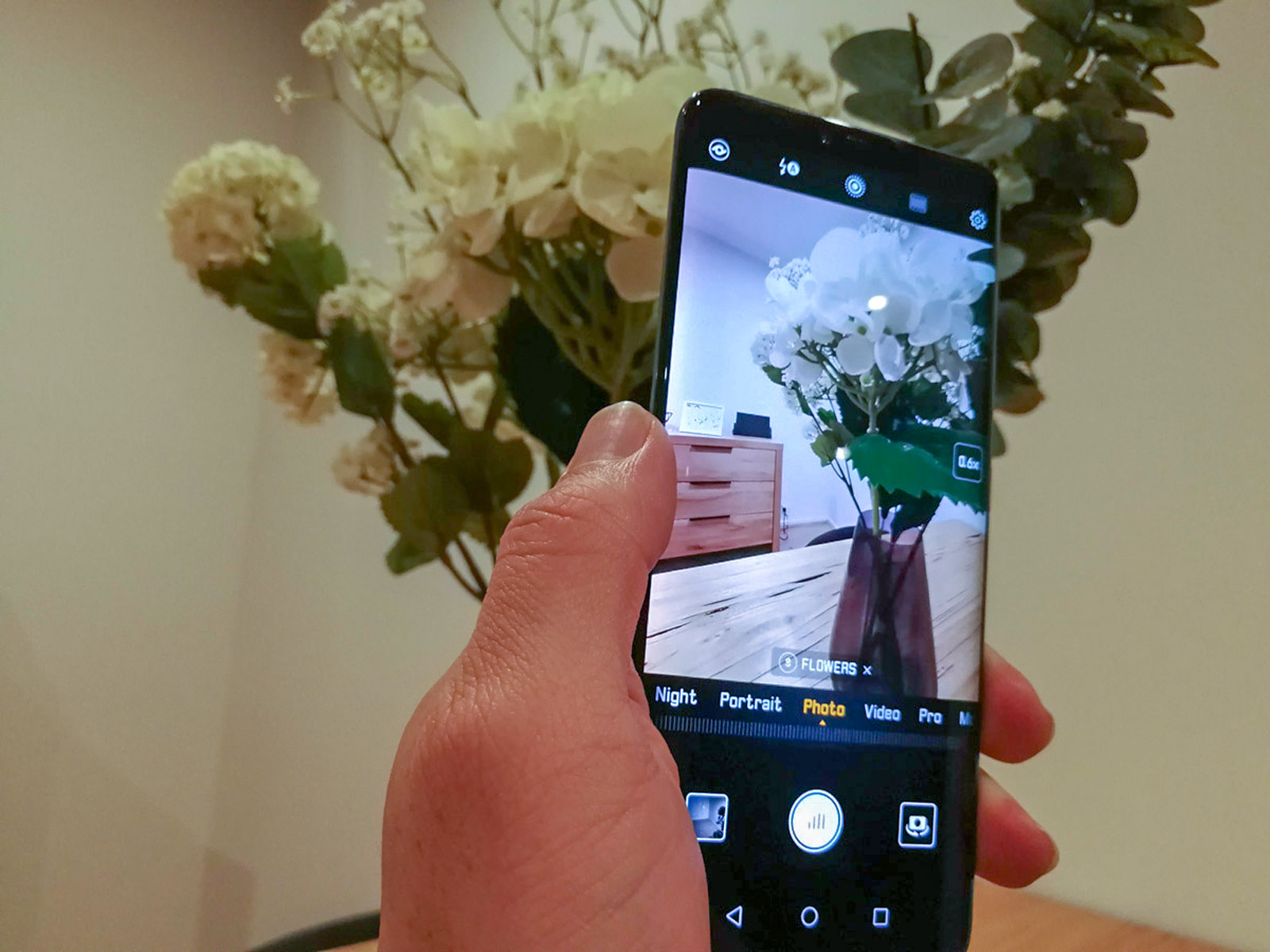 Huawei continue to impress me with the quality of the hardware they produce. Their in an unfortunate position in the US, where they lack carrier support, which means most people can’t access their outright purchase price. In Australia, Huawei have Optus and Vodafone on-board, as well as a number of other retailers, so you have no excuse.

Globally the US situation is such a shame, because this phone is an absolutely brilliant piece of engineering in terms of the internal componentry, achieving stunning performance, along with the external body that feels great in the hand and looks classy as you place it down on the coffee table.

The combination of amazing cameras and battery life, as well as running the latest version of Android, really put this phone over the top for me. If it’s a choice between Android phones, this is it, this is the one you want, sorry Samsung, but Huawei just beat you and not by a little bit. If it’s a choice between this and Apple, you’ll still get a nice phone, nice photos with Apple, but you won’t get dual-sim, that battery life, USB-C or that price point. If you’ve been eyeing an ecosystem switch, this could definitely be the phone that makes you pull the trigger.

The list of features on offer here are simply stunning and we’ve probably not mentioned them all, like Miracast, Bluetooth 5.0 (BTLE compatible) the ability to add up to 256GB Nano Memory (size of nano sim cards), also they’ve continued the infra-red port to IR-blast devices like your TV. It’s also IP68 rated and features 5Ghz 802.11 AC (wave 2) Wifi, which supports up to 2.3 Gbps (up from 1.3Gbps).

As we close out the end of 2018, I think Huawei just stole the show as the best phone of the year. The Pixel just launched, the iPhone just came out, Samsung had their flagship a couple months ago, but for my money, the Mate 20 Pro is the one to have in your pocket.

Jason Cartwrighthttp://techau.com.au/author/jason/
Creator of techAU, Jason has spent the dozen+ years covering technology in Australia and around the world. Bringing a background in multimedia and passion for technology to the job, Cartwright delivers detailed product reviews, event coverage and industry news on a daily basis. Disclaimer: Tesla Shareholder from 20/01/2021
Previous articleDJI’s Phantom 4 RTK is the most accurate low altitude mapping solution
Next articleThe Block using Gavl to bring in virtual bidders on auction night