Huawei’s flagship P30 Pro has been my daily driver for the last few months, but Huawei wants to play at the mid-range market as well. For who prioritise value for money, the mid-range P30 Lite may be the right fit for you. The phone offers many of the same great features of the flagship, but at a significant discount.

When a team of engineers sit down to start building a mid-tier phone, their challenge is to keep as much of what we love about the flagship, while scaling back the specs of the phone to reduce the final price. Done well, you’ll find a way to deliver most of the best parts of the top-tier devices at a fraction (sometimes below half) of the price. When things go badly, the phone ends up so compromised, you can barely see any resemblance to the flagship.

So how did Huawei do with the P30 Lite? After spending a few weeks with it, it’s time to detail that for you. 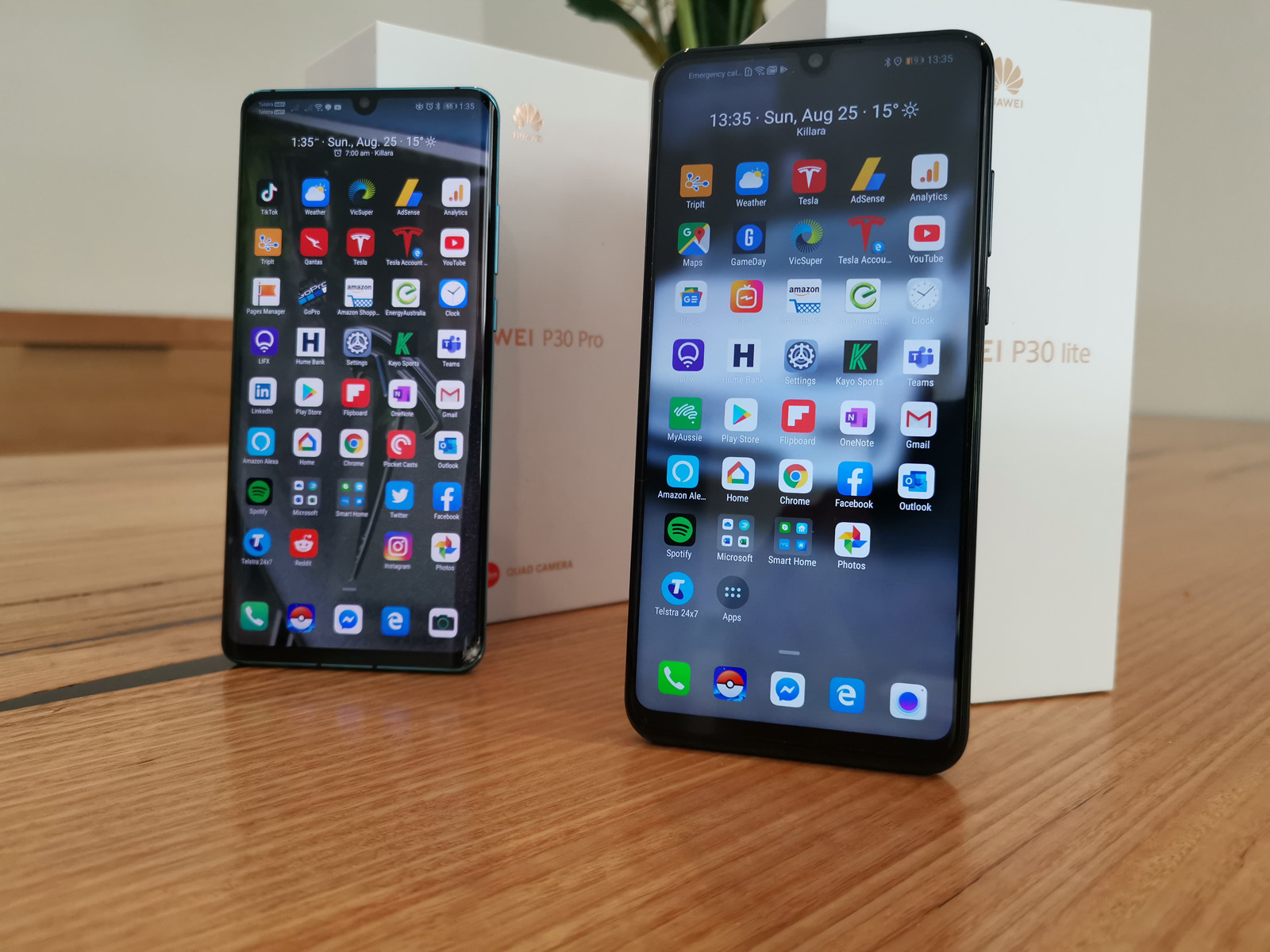 The Huawei P30 Lite features a 6.15″ display (running a resolution of 2312 x 1080), just slightly down on size from the P30 Pro and almost spot on with the P30. The OLED display technology gives way to an LCD with LED backlighting, while still retaining great colours and brightness levels, but does loose some of the viewing angles. Not sure about you, but this isn’t a big loss in my eyes. While I do occasionally have the phone on the table nearby, most of the time it’s in my hand, angled directly towards me.

The biggest P30 Lite keeps the tiny teardrop notch at the top of the display, only big enough to house the front-facing camera. Rather than the innovative under display fingerprint ready of the big brother, the P30 Lite moves the fingerprint reader to a more conventional rear sensor, just the same as the Pixel 3 line and older Mate 20 Pro.

The bottom of the device still keeps the same USB-C connector for charging and file transfers which is a very welcome inclusion. The bottom edge also adds back the headphone jack that was removed from the P30 Pro. On the surface, the return of the 3.5mm jack is a strange thing to add, given the hard work (PR-wise) that had been done to convince everyone that wireless headphones are the way of the future.

In the box for the P30 Lite, you’ll find some fairly average headphones with a 3.5mm connector. Given the price point of this mid-tier phone, Huawei clearly understands there’s unlikely to be budget for $300 wireless earbuds on top of the price of the phone. In that light, they make a lot of sense.

When it comes to photography, there are real differences in the camera specs between the top end and the mid-tier, but the great news is, you can still get amazing photos from the P30 Lite. It features a 32 MP front AI Super Selfie camera and a 24MP triple rear camera system.

On the software side, you still get the heralded Night mode in the camera, which allows for amazing shots in the dark. This means if you’re heading to a party after dark, you don’t have to worry if you’re phone can take good photos at night, it can. Even on the default setting, it does a pretty good job, but if you can stand still for a few seconds, the Night mode is fantastic. The P30 Lite also picks up a dedicated, out of the box AR lens that tracks your head and mouth movements and converts them into 3D Qmoji (Huawei’s version of Memoji).

In terms of video, you do lose the ability to film in 4K, instead you top out at 1080p 60fps. This will be a big downside for some, but others may be fine with it. It is worthwhile remembering that 1080 does consume substantially less storage than 4K.

This brings us to the storage options.

The P30 Lite comes with 128GB storage, while the P30 Pro features 256GB. The great thing about Huawei and Android is that they allow you to drop in a microSD card and expand that. As we know, aftermarket microSD cars are dirt cheap these days, so it’s a great option for those who run their lives through their phones. With the P30 Lite, if you chose to drop in that extra storage, just note you will be consuming one of the available dual-sim slots.

In terms of the overall design, the phone is basically the same thickness and very similar weight as the Pro, so the sleek, sexy plate of glass look is retained, even despite the dramatic price difference. 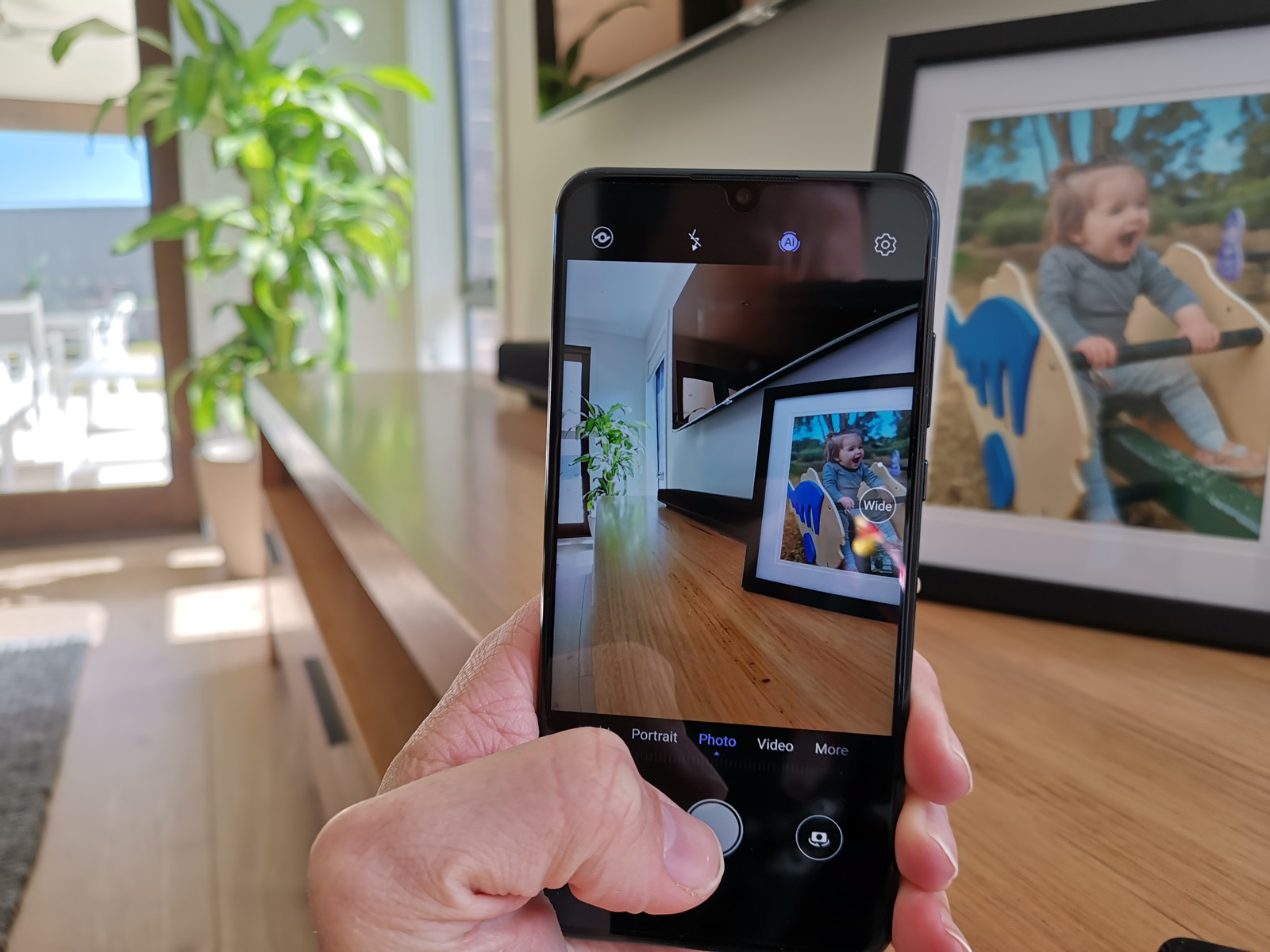 Performance between a mid-tier and premium phone is expected to be different as the CPU/GPU and in this case NPU are one of the biggest areas of saving. The P30 Lite features an Octa-core Kirin 710 CPU running at 4 x Cortex-A73 2.2 GHz + 4 x Cortex-A53 1.7 GHz. The GPU is the Mali-G51 running at 1 GHz, still not bad for a smartphone.

So what does all that mean in day-to-day performance? The difference is really most noticable in high performance tasks like game launches. The P30 Lite takes a few seconds longer than the P30 Pro, which is still perfectly acceptable. It’s important to remember that if you’ve never used a flagship, you’ll never miss the extra performance on offer there. It’s also important to understand that most daily tasks like snapping photos, launching and switching apps are all very fast and a great user experience.

Below is a performance test between the P30 Pro and P30 Lite, using the launch of Pokemon Go as the benchmark. 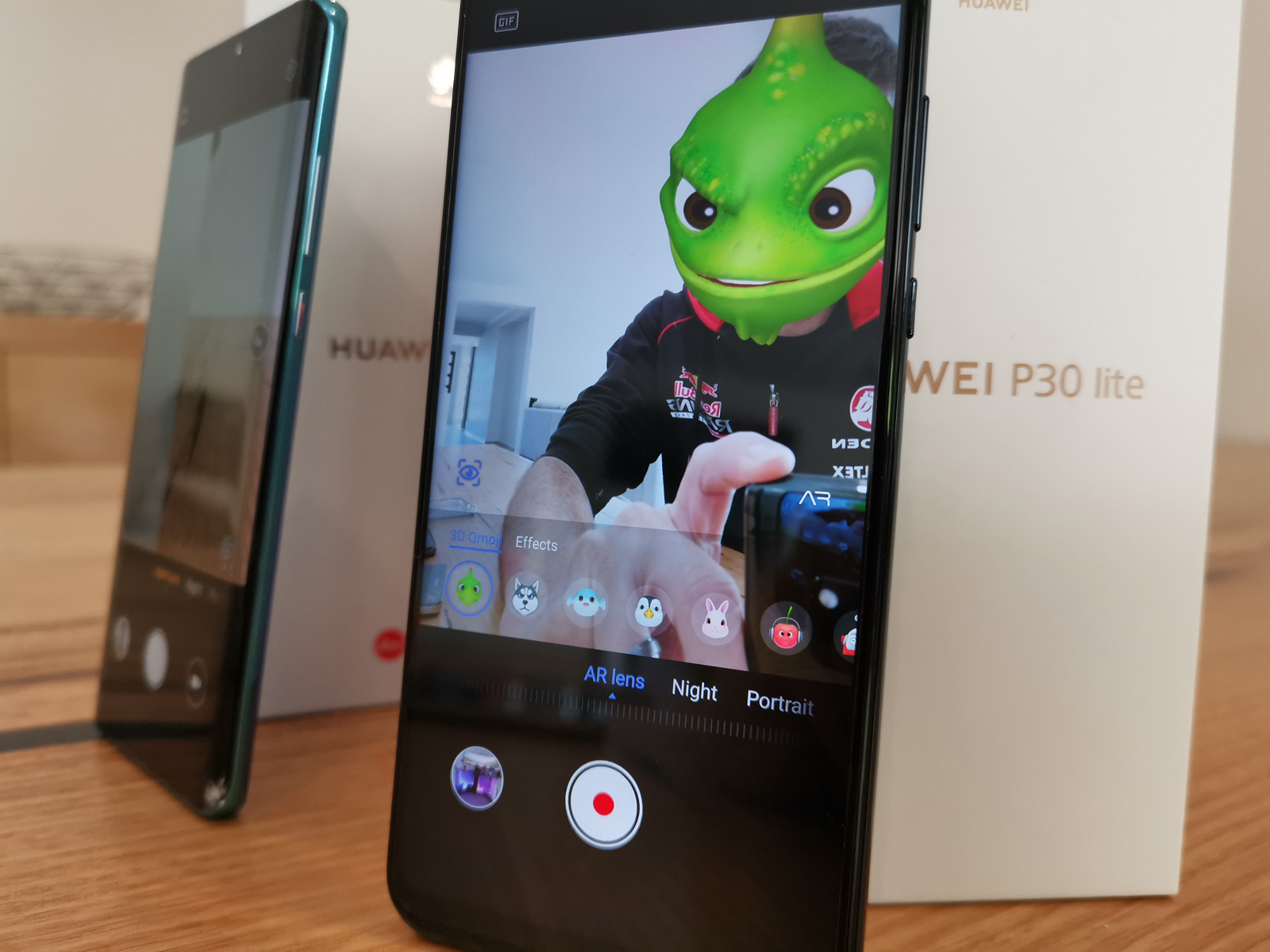 Stand out features of this phone.

It may not sound like a big difference, but the Lite features Bluetooth 4.1, while the Pro gets the very latest, 5.0 LE. Things changed substantially with v5 of Blutooth and once you’ve had it, you’ll never look back. For those upgrading from a couple from a phone that’s 2 or 3 years old, this will still be a substantial move forward.

The P30 Lite shipped with EMUI9.0, but has recently been updated to 9.1 the same as the Pro, so in terms of software, they’re both based on Android 9. There’s some Huawei tweaks, but generally it’s fine to use. My personal favourit launcher is Microsoft Launcher, so I generally switch out to that fairly quickly after using a new phone. One of the big advantages of Android is customisation and once you find your favourite launcher, switching any new phone to it will give you a familiar experience.

In terms of battery life, the Lite features a smaller 3,340mAh battery, down from the massive 4,200mAh of the Pro and 3,650mAh in the P30. When it comes to real-world usage, you’ll have to work out what kind of user you are. Are you a mid-tier phone buyer with heavy use? Then you’ll get most of the day, but smash it hard and you’ll likely need to find a charger around 5-6PM. If you’re a casual or medium user, then you’ll easily have plenty of battery left when your head hits the pillow.

Speaking of charging, wireless charging is also something that gets the chop in the effort to slash the price of the P30 Lite. Wireless is more convenient, but I think if you asked most people if they’re like to half the cost of their phone if they plug in a cable each night, they’d take that deal. 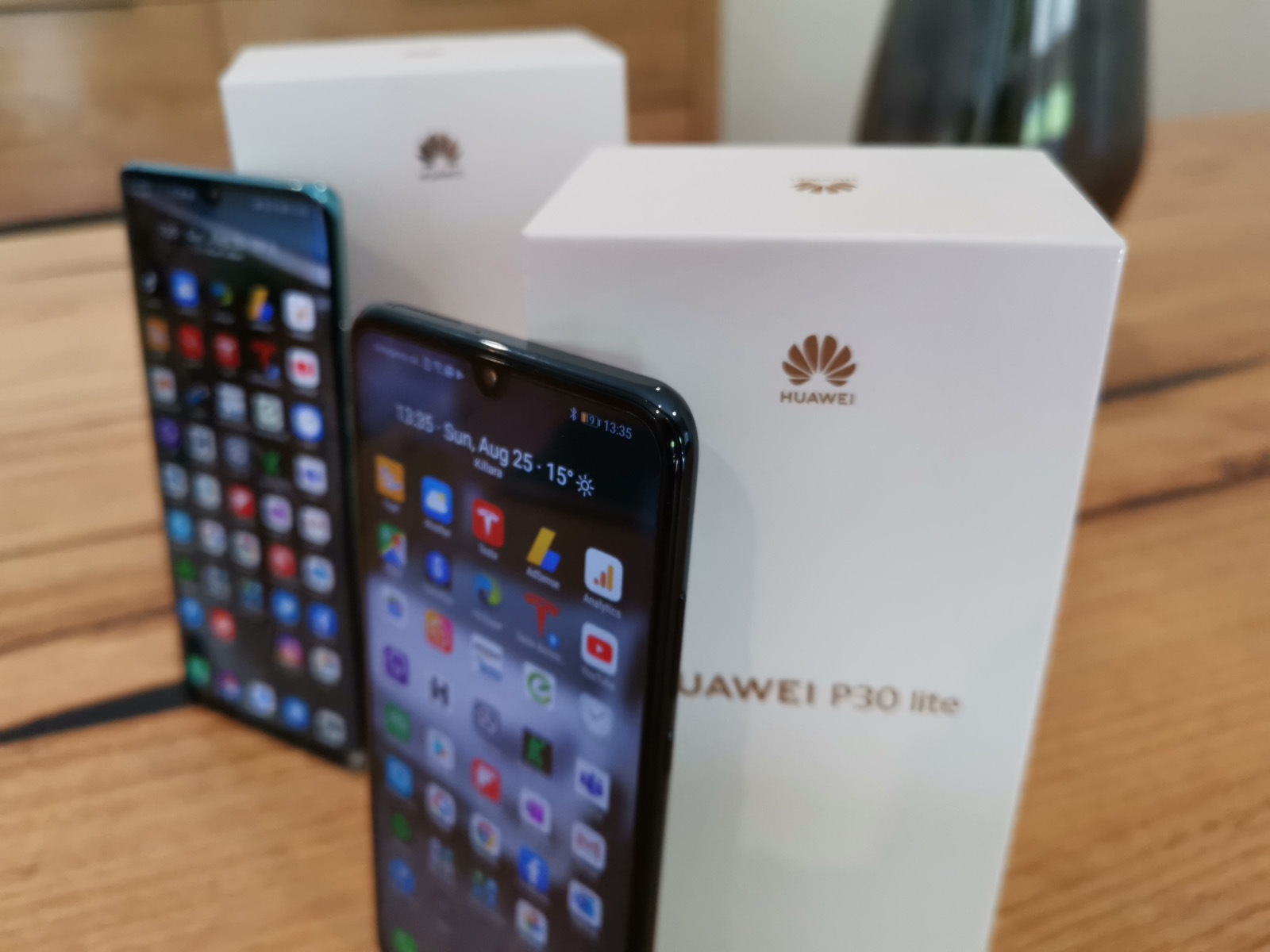 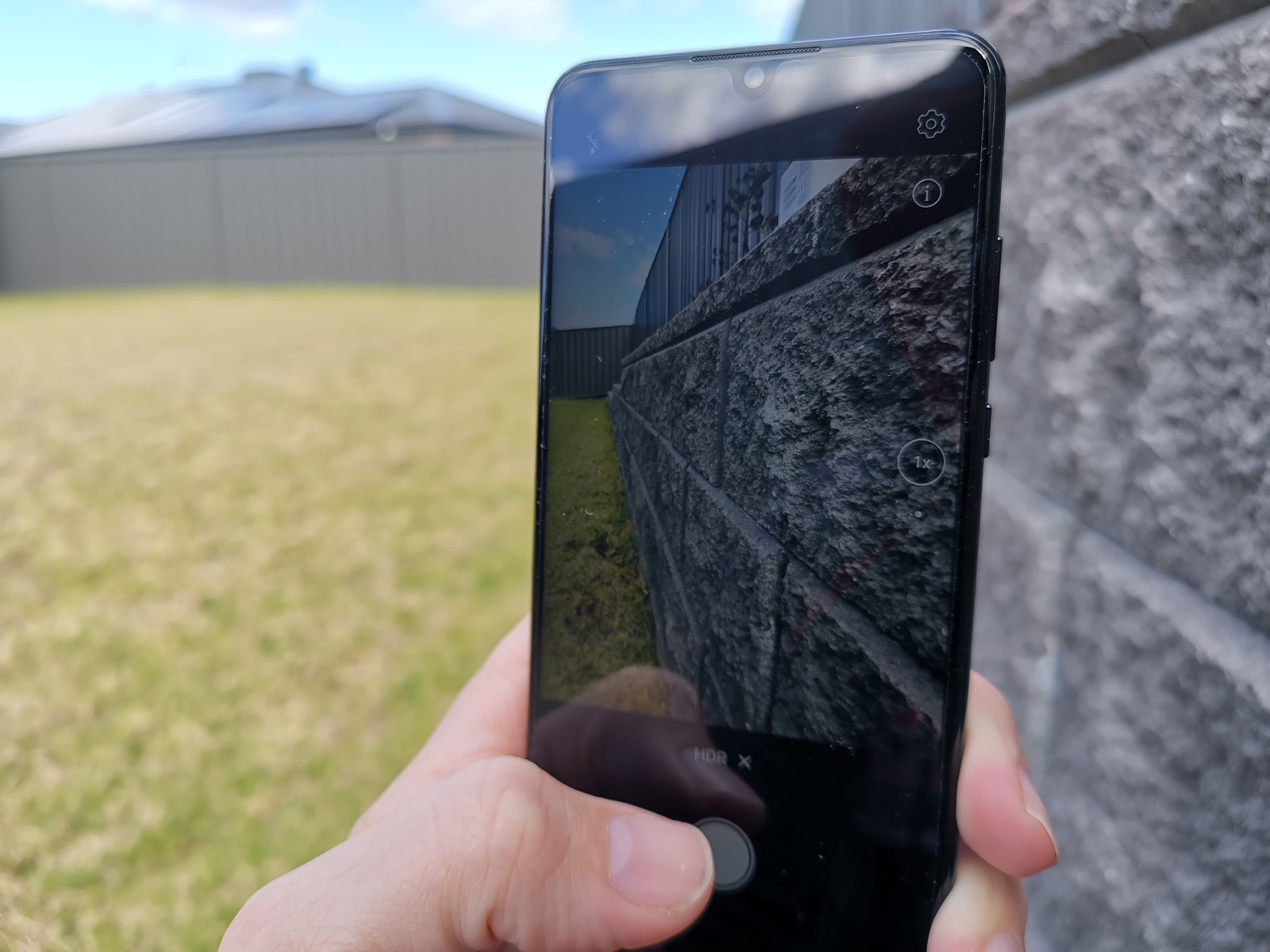 Throughout this review, I’ve referenced the saving of the Lite version of the P30, compared to the P30 or P30 Pro, so how much cheaper is the P30 Lite?

For under A$500 Huawei have a seriously compelling offer here with the P30 Lite. Those on the tightest bugdets may consider the Huawei Nova 3e, but seriously for $200 more, you are getting a seriously big upgrade in specs and I’d strongly recommend you invest the money if this will be your phone for the next 2-3 years.

By way of comparison, Apple’s entry level iPhone is the iPhone 7, a design that’s now 4 years old (released in 2016), featuring a big forehead and chin on it’s 4.7″ display. That phone costs A$749.00 for the 32GB model. That’s A$250 more for a smaller display, a quarter of the storage capacity, that’s one expensive Apple logo.

The P30 Lite is available in both Peacock Blue and the unoffensive, straight Black. 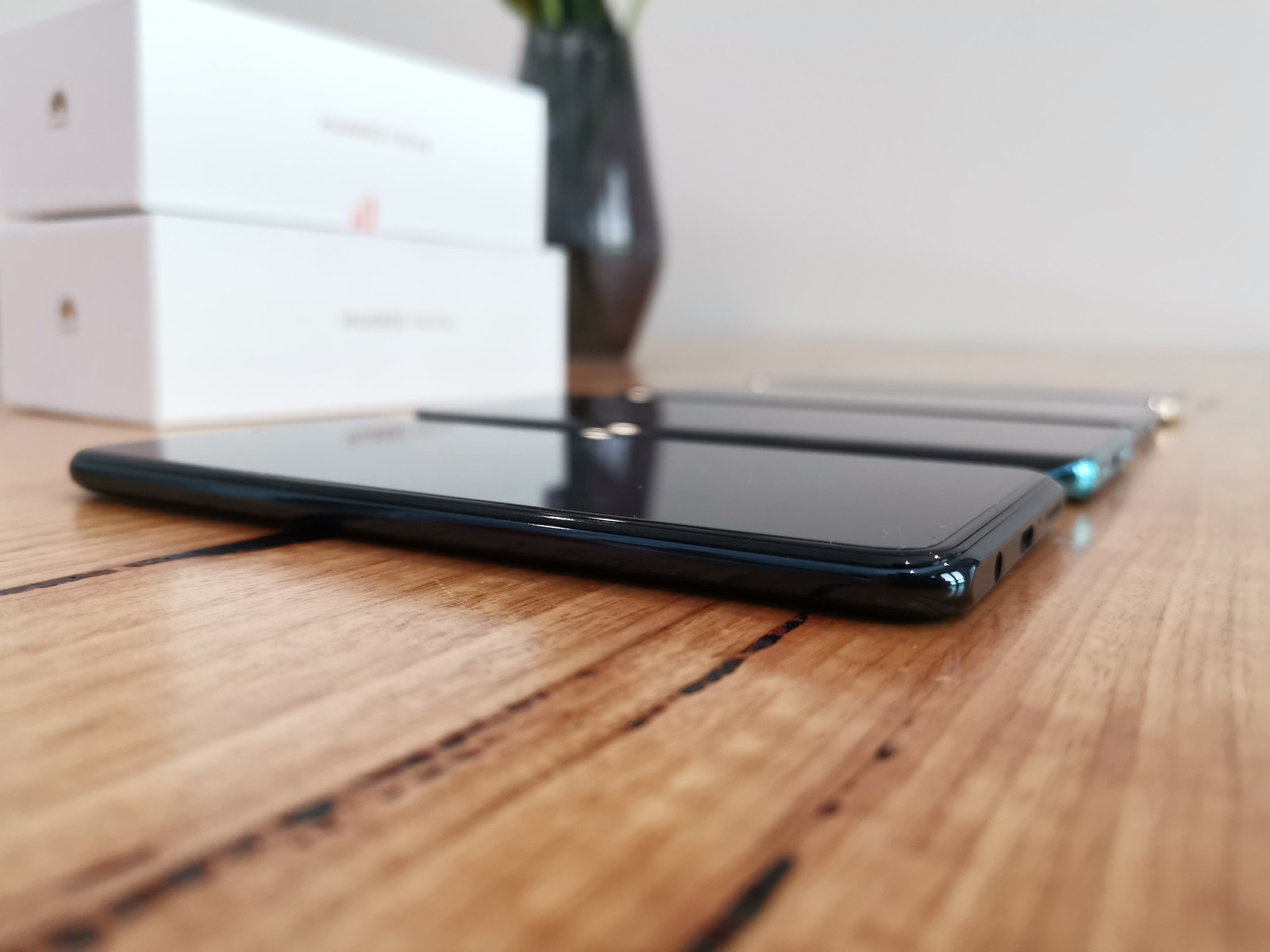 The Huawei P30 Lite offers an exceptional lineup of features for the price tag. In terms of value of money, you’d be hard pressed to find something that beats it. Reflecting on the ultimate challenge of shaving the price and maintaining what a P30 is, I think Huawei has done a brilliant job. With such a similar form factor, so many of the same features, it really does feel Huawei engineers cut in the right areas.

If you’re after a new phone and don’t want to spend the world, then you defintiely should go in store and get hands on with the P30 Lite, I think you’ll be impressed. At almost 1/3rd the price of the flagship, the phone does make some compromises, but the overall experiences feels a lot closer to a flagship than what the price tag would suggest.

With offerings like this from Chinese brands, it’s not surprising they had a competition ban placed on them in the US. The other brands should definitely be worried.

I’d definitely recommend the P30 Lite join your short list of mid-tier phones and would be surprised if you don’t go with it, the value for money here couldn’t be higher.

Jason Cartwrighthttp://techau.com.au/author/jason/
Creator of techAU, Jason has spent the dozen+ years covering technology in Australia and around the world. Bringing a background in multimedia and passion for technology to the job, Cartwright delivers detailed product reviews, event coverage and industry news on a daily basis. Disclaimer: Tesla Shareholder from 20/01/2021
Previous articleYou should expect your rubbish driving to be caught on video
Next articleAust Gov just funded another EV charging network, finally the wallet is opening, Evie grabs $15 from ARENA