When you’re selecting a router, one of your goals is to make a choice that offers the right set of features and price for your needs, but overall, you want speed. We all pay for internet to be connected to our homes and many struggle to get geat speeds, so once the connection reaches your house, you want to minimise any bottlenecks or opportunities for further reductions in performance.

Netgear’s latest router in their Nighthawk range is the XR700. This router is firmly focused on gamers, which have some of the most intense demands of any user. This customer segment are also some of the least forgiving, with strict requirements on low ping, high bandwidth. The XR700 answers those requirements with a crazy capacity to leverage 10G Ethernet LAN with an SFP+ Port. While the module isn’t included with the router, the fact that you can add one and achieve those speeds, is crazy.

Bringing in internet is one thing, but what about local networking speeds? The XR700 offers offers 6x 1Gbps ports, but its that 10Gbps port that opens the door to an ultra-fast networking future. 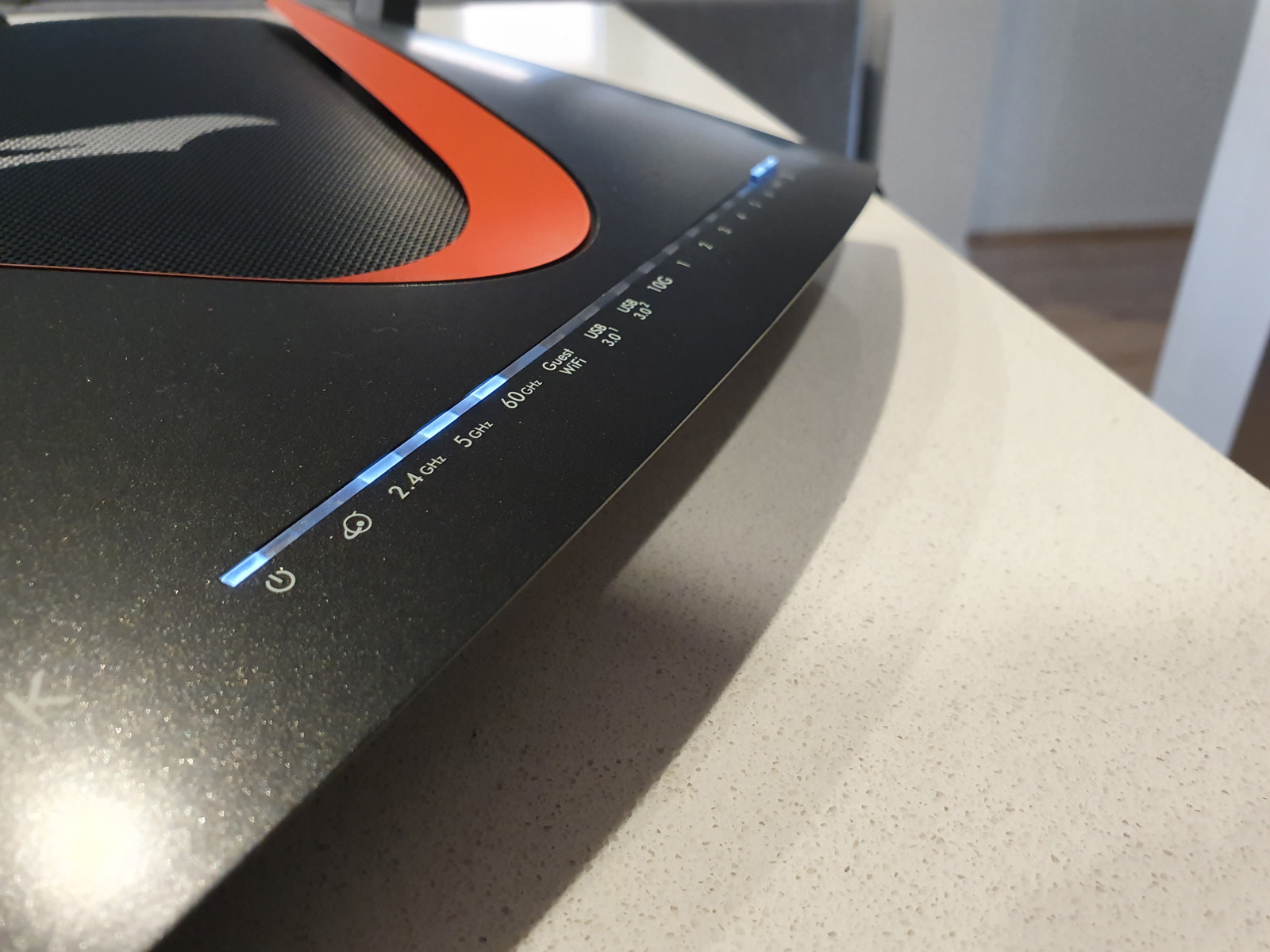 An attention to detail.

The Nighthawk XR700 features one of the best designs I’ve seen for a router for a while. It seems we’re finally moving forward from the crazy spider design we’ve seen in routers for the last few years. The XR700 still has large antennas to broadcast WiFi, but these are located at the rear and understated. The main body of the router is is black, with a giant red boomerang across is, and a sunken section that proudly showcases the Nighthawk logo, while functionally operating as a heat vent for internal components which includes a crazy 1.7GHz quad-core processor.

One of my favourite attributes of the design is the consistent suite of LEDs at the front. These represent the different status of each of the router functions and ports, but I particularly love the ability to switch them off. This is a mistake far too many router manufacturers forget to offer. Given many users will place these in semi-public locations, having the ability to disable all the flashing lights is a big positive. Thanks to great software, you’ll know if there’s an issue, so reading the LED lights to diagnose an issue should be a last resort.

Around the back of the device, you’ll find ports and lots of them. There’s a total of 6x Gigabit Ethernet ports.. along with the 10 Gigabit LAN SFP+ port, 2 USB 3.0 ports. The 4 fairly sizable antennas broadcast the 802.11ad WiFi at 60GHz, the fastest WiFi technology available. 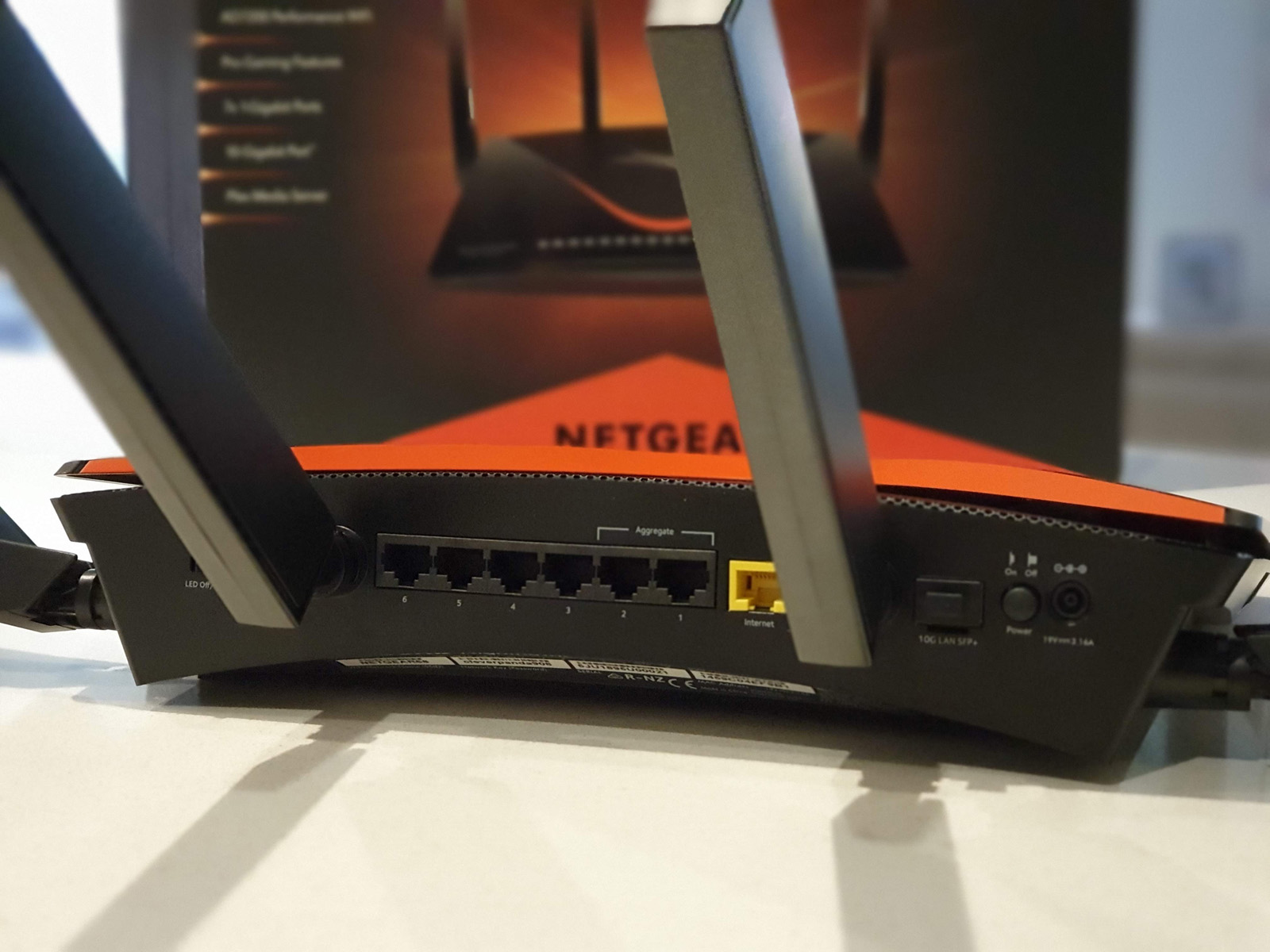 Like most modern homes, I have a crazy number of wireless devices. In my case, there’s somewhere between 15 and 20 wireless devices, while the high-bandwidth rooms like the Home Office, the Living Room and Rumpus are all wired Ethernet. Despite my fairly demanding requirements, I really didn’t push this router to the limit.

This router would be more than capable of powering a room full of eSports gamers. While I seen some of the lowest Pings I’ve ever acheived on FTTP NBN, and the best wireless range of any router I’ve used in my home, the reality is, this router is probably overkill for my needs.

The 10Gbps networking is only possible if you configure your system excatly right. First you’ll need to source a 10GB SFP+ module, there’s plenty on Amazon, but make sure you check the specs. You’ll also need a 10Gbps network card in your PC. Most will have Gigabit Ethernet, so you’ll likely use a PCI Express port to achieve this. Then you’ll need to connect the router to your PC via a the fastest Ethernet cable you can buy. While it’s tempting to save money, don’t or you may not be able to acheive those insane speeds on offer from a 10Gbps connection.

Having that level of connection to a single device (doesn’t have to be your PC, could be a shared NAS box) would be amazing, but an even better solution would be to wire 10Gbps to multiple gaming rigs, particularly if you have a couple of desktops at home that are used for gaming. This would require a 10Gbps switch and it turns out, Netgear has already thought of that. The Netgear Nighthawk Pro Gaming SX10 offers 10x Gigabit Ethernet ports, but 2 of those ports are also 10Gbps ports.

If your goal is to extract as much performance as possible, this is easily the best router I’ve seen in the consumer/prosumer space. The next step up would be racked enterprise hardware, which is obviously overkill unless you’re planning on launching the next eSports team from your house. 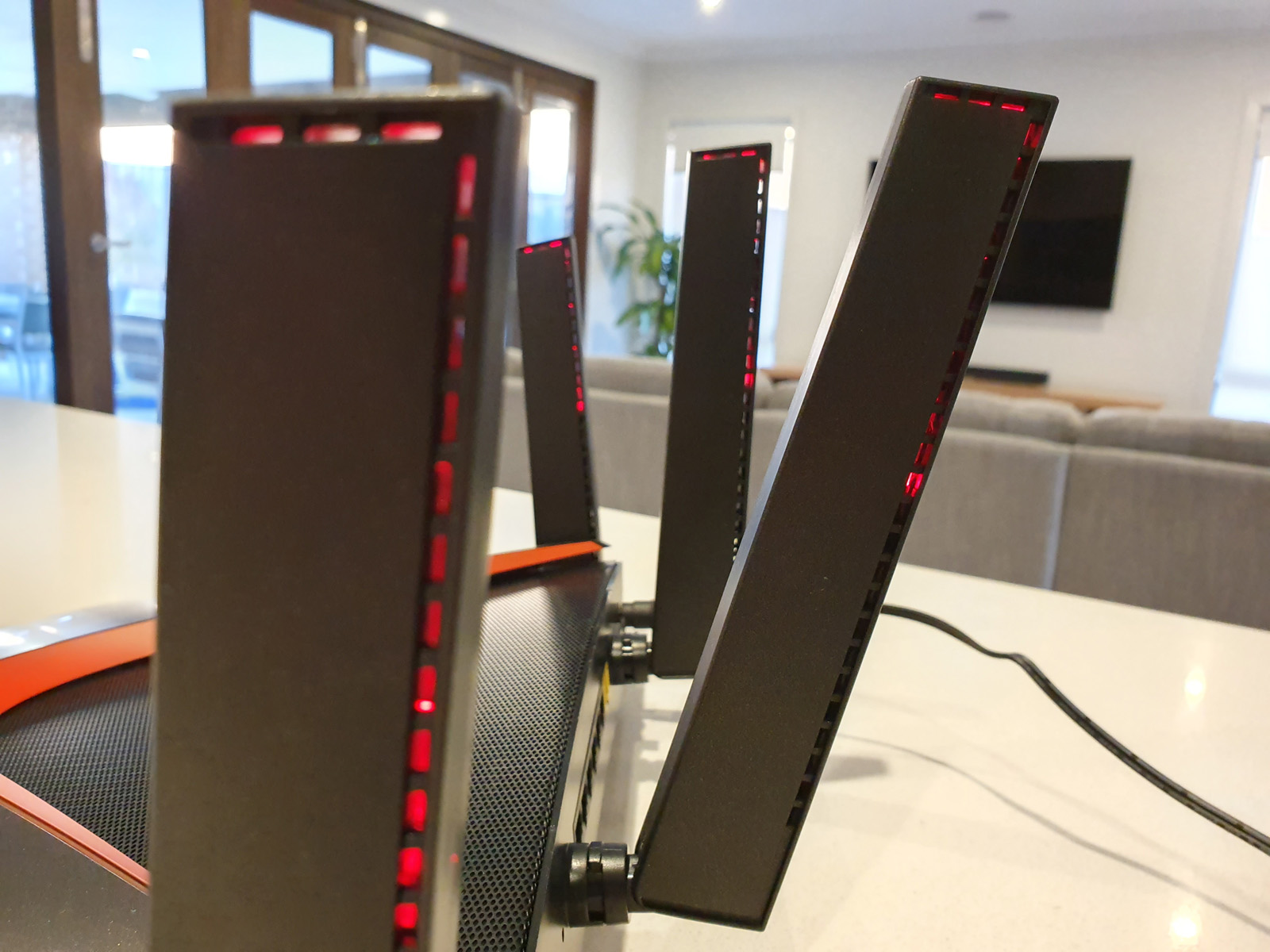 Stand out features of this router.

The features on offer with the XR700 are pretty amazing. Let’s start with the software. Most routers I’ve configured come with software that really feels like an after through. With the XR700, Netgear include DumaOS gaming software. This offers an unprecidented level of control over how your traffic flows in and out of your network. For those that like ultimate control, this is brilliant. The ability to customise and change the interface based on the parameters that are important to you, is such a great feature. With a great UI containing plenty of charts and graphs, it’s really easy to get an overview of your network.

In terms of Wireless connectivity, the router offers 2.4Ghz, 5GHz like many others, but this also offers 60GHz 802.11ad WiFi. Using this frequency blend helps the router acheive amazing wireless performance. 60Ghz offers the best speed, while the others combine to offer range and at the furtherest corner of my house, I seen just a 10Mbps drop off, despite going through 10 walls. With other products, I’ve seen as much as a 50Mbps drop off to the same location.

In terms of connectivity, the router features a 6 Port Gigabit Switch. Most other devices offer just 4 and with IoT controllers from Philips Hue and Sonos, I definitely appreciated the extra 2 ports.

When connecting to the NBN, you’ll use the 1x Gigabit WAN Port. Like most, I’m currently connected at 100Mpbs, but it is great to know this router is ready, should nbn start offering 1Gbps plans.

There’s two USB 3.0 ports which allows you to connect a thumbdrive, or external hard drive to share media with all clients. 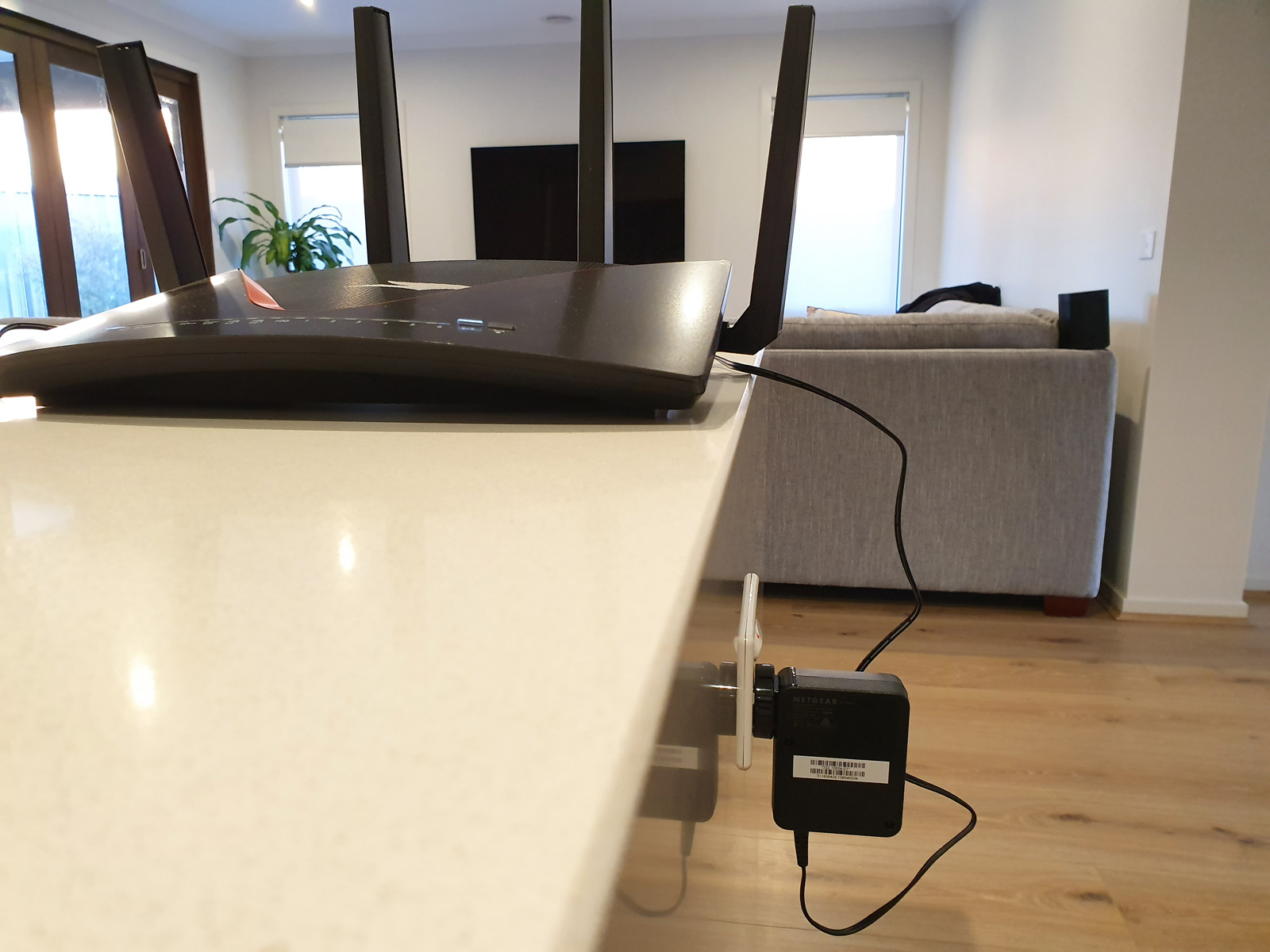 This product has one of the largest power bricks that I’ve ever seen. It really is massive and I don’t really understand why. The body of the router is so large that it really should have been possible to hide this. Obviously the router produces a lot of heat, so adding a power brick in there would be a challenge, but come on engineers, the Xbox did this years ago, surely you can try. 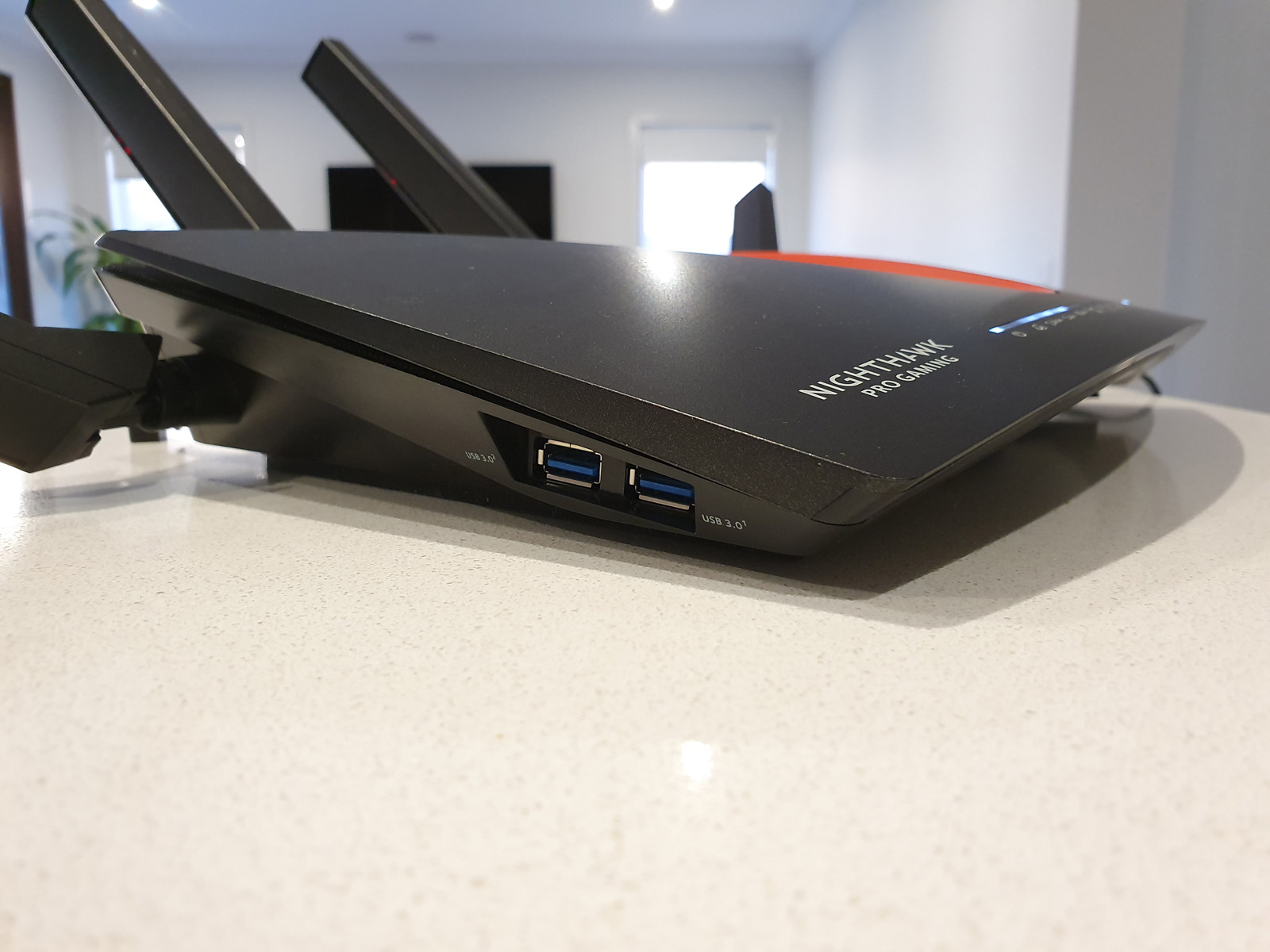 The Netgear Nighthawk XR700 Gaming Router is available now from all your favourite networking outlets. It’ll set you back A$799.00. That price isn’t unfamiliar for a premium router and considering the crazy level of performance on offer, the long list of features, I think it’s well justified. If you’re in a share house, you can split the cost with room mates and share in the benefits.

The complimentary Nighthawk SX10 Pro Gaming Switch is available for an additional A$539.00 from Scorptech. 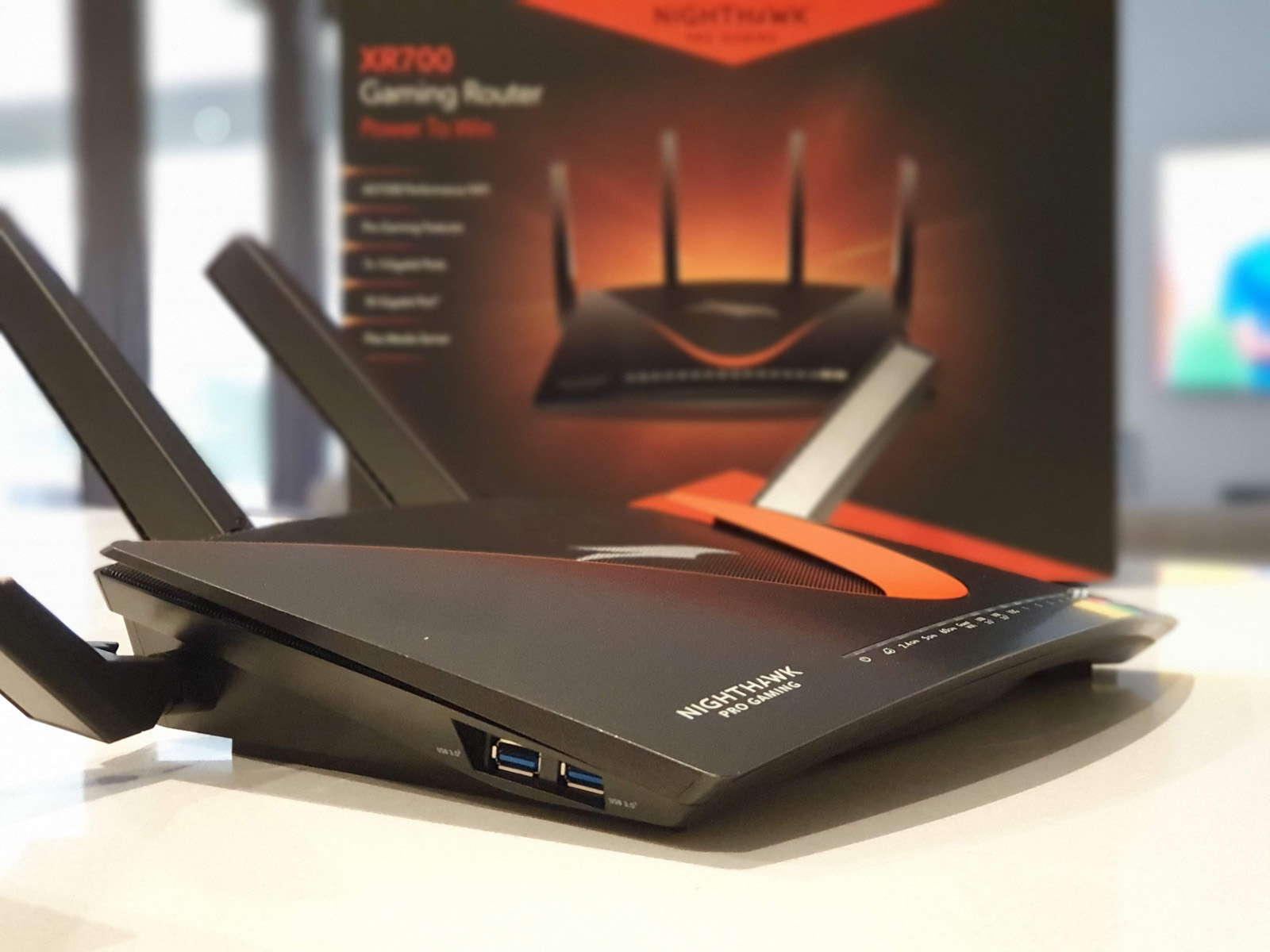 If you’re in the market for a new router and have performance as your number one priority, it’s hard to imagine one that offers more than this. In the not too distant future, I’m sure we’ll see affordable dual-10Gbps ports in a router, possibly in 2020, but for now, the RX700 offers amazing performance.

I love the thoughtfulness put into the creation of this product, it really feels like the engineers at Netgear understand gamers and made a router they’d love. It’s touches like the ability to turn off the LEDs that show they appreciate this may end up in some bedrooms and if that’s your bedroom, you’ll likely want to kill the lights and get some sleep… at least for a couple of hours.

The price is a lot for a router, but the performance vs feature mix justifies that price tag. While it won’t appeal to everyone, those after the best can stop looking, the Netgear RX700 is likely the best prosumer router we’ll see before the end of 2019.

Jason Cartwrighthttp://techau.com.au/author/jason/
Creator of techAU, Jason has spent the dozen+ years covering technology in Australia and around the world. Bringing a background in multimedia and passion for technology to the job, Cartwright delivers detailed product reviews, event coverage and industry news on a daily basis. Disclaimer: Tesla Shareholder from 20/01/2021
Previous articleRio Tinto invests A$10 million in students, partners with BlueChilli and AWS for mine automation
Next articleMelbourne-based Raine scooter is the fastest funded electric vehicle ever in just 43 minutes.