Crackdown 3 is being released this week and I was lucky enough to get early access to review the game. I’m someone who played the first Crackdown and absolutely loved it, mainly because it was a revolution, one of the first games where the game mechanics not encouraged you, but required you to move about the environment in 3 dimensions.

The game’s reward system is second to none, in terms of your effort being rewarded by increased (often superhuman) abilities. Collecting orbs allows you to run faster, jump higher, have more effective weapons and drive vehicles faster. Those upgrades on their own is addictive, but combine that with a fancy colourful animation and a slick sound track and you’ll be hooked for hours.

I never got around to playing Crackdown 2, so was pretty keen to see what’s changed since February 2007 on the Xbox 360. The answer is, lots. The game looks great and the gameplay is seriously enjoyable, so lets get into the detail. 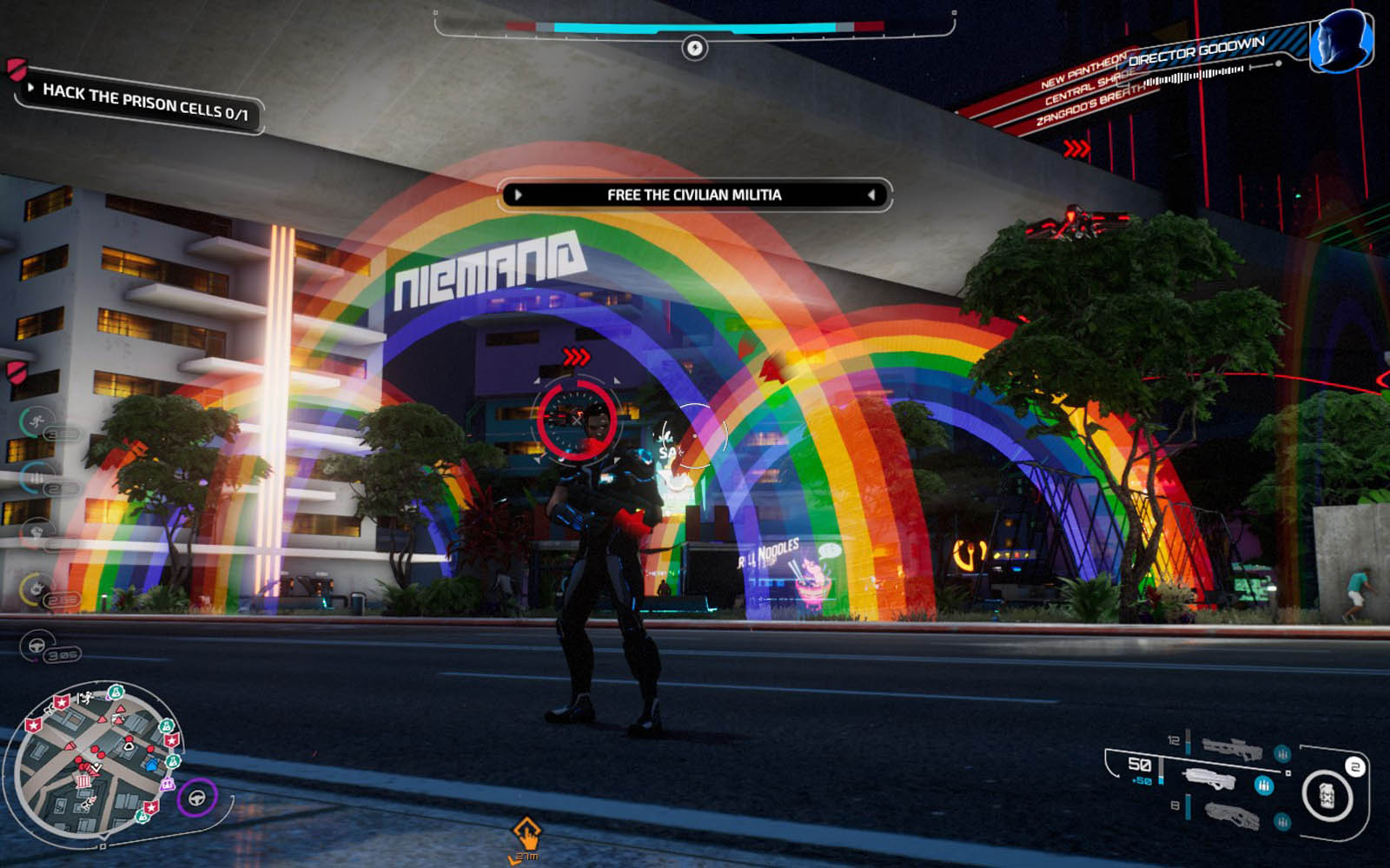 There’s no doubt that Crackdown 3 looks great. It’s certainly not the best looking game I’ve ever seen, that’s probably still Forza Horizon 4. The game is built on the Unreal Engine, but remembering we’re running on modern hardware. As the game is an Xbox Play Anywhere title, I got to experience the game on both the Xbox One X on a 65″ 4K QLED TV, as well as a PC connected to a 34″ Ultrawide monitor, powered by a GTX1080.

On both platforms the game shines, delivering an experience that traverses day and night, but gets straight down to delivering a familiar experience of allowing you as the agent explore the city.

The game is 4K Enhanced and HDR capable. When you first start the game, you’ll get asked to set the brightness. My tip is to make sure your TV is set to HDR mode before configuring this as it’ll make sure if you’re playing with a HDR display, that the game looks dark, like black black when it’s meant to be. At night, the game feels like a grungy Vegas with metric tonnes of neon everywhere.

Given the environment is full of ambient colours and animations, having a very black base makes all of that colour pop even more. Shadow detail is also important as you’ll be hunting bad guys and orbs in obscure places, often underground, but I found the game does a great job of this shadow detail, so there was never an enemy shooting you from a surprise location.

Your bio suit looks fantastic, with built-in illumination, shiny reflections and creases where you’d expect. As your Agent is in the foreground, this is important it looks great. The same is true of your various weapons, each with a different firing mechanism or type, but the deployment is uber satisfying as it lights up the ground below it’s trajectory as it travels to your enemies.

The cartoon render is a graphic style that was made famous by games like Crackdown and Borderlands and in Crackdown 3, it’s still there but feels a little less cartoony and much more real, probably due to the quality of the materials and lighting effects. 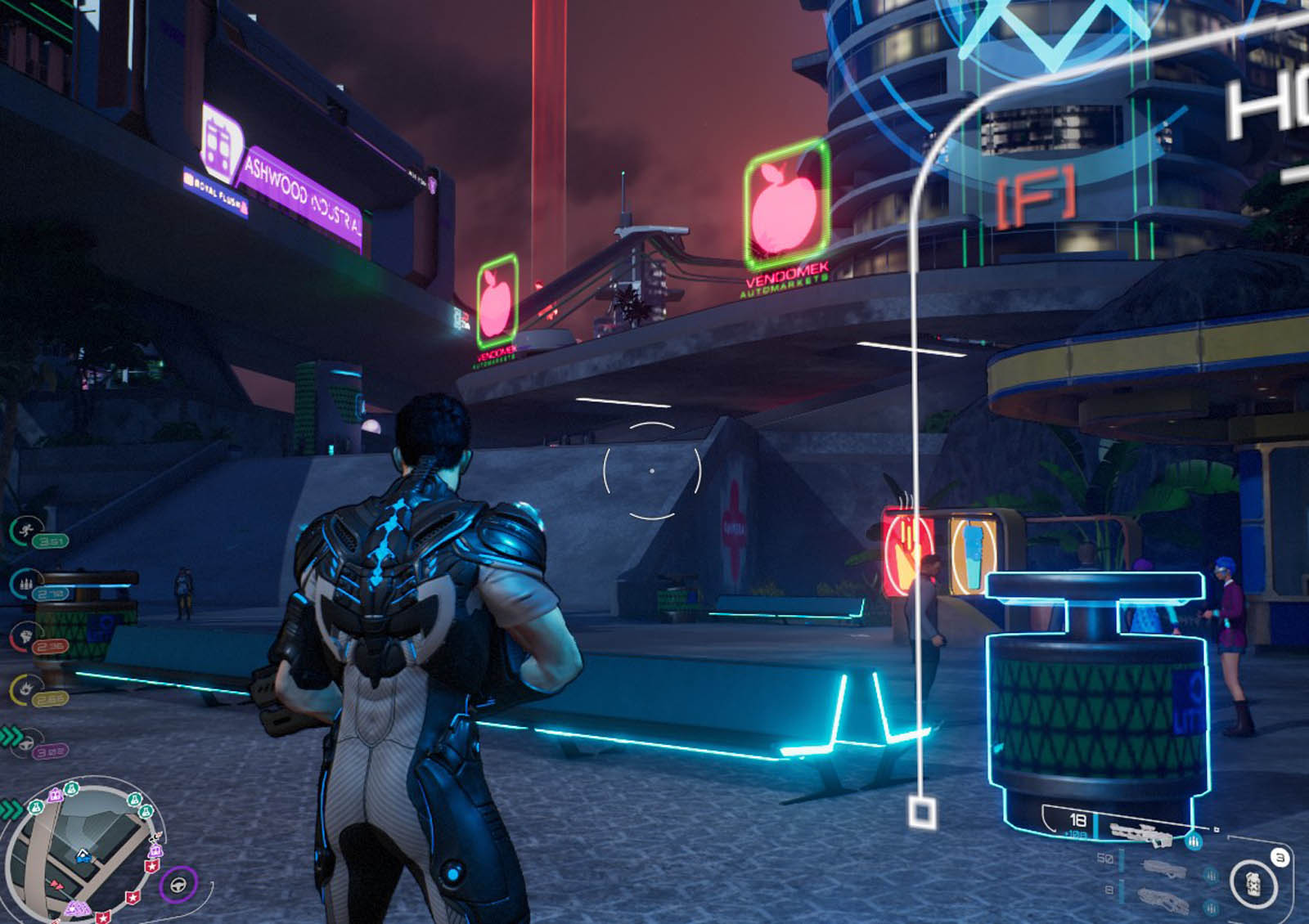 What will it do for you?

This time round, Crackdown feels familiar, so that’ll keen franchise fans happy, but there’s also plenty new to sink your teeth into. The new campaign is available to play as single player or as co-op with a friend online and as you Agents go about exploring the new city, you’ll face new enemies, use new weapons and drive new vehicles.

Part of the charm of Crackdown is it’s ability to let you explore and be sidetracked regularly from your primary mission(s). This is where goals turn into fun and yeah, keep an eye on that clock because it has a habit of getting away from you when you’re deep in the Crackdown world.

Now for a breakdown of the features:

Open-World Playground
Play it solo or grab a friend with Xbox Live Gold to battle it out in co-op mode. The world is large, I wouldn’t say enormous, but certainly feels big enough and varied enough to consume of hours of your life just exploring it. The horizontal plane is impressive, with roads, water and even chemical sludge you want to avoid, but it’s the vertical elevation of buildings that make this feel Crackdowny. The enemies are ready to engage you at any time, often when you were just practicing your drifting skills, so when you’re armed up and ready to fight, there’s plenty of crime lords to take out.

Wrecking Zone
New for Crackdown 3, this all-new “Wrecking Zone” is a 5×5 online multiplayer experience that uses the city as a backdrop to some amazing 3 dimensional battles. 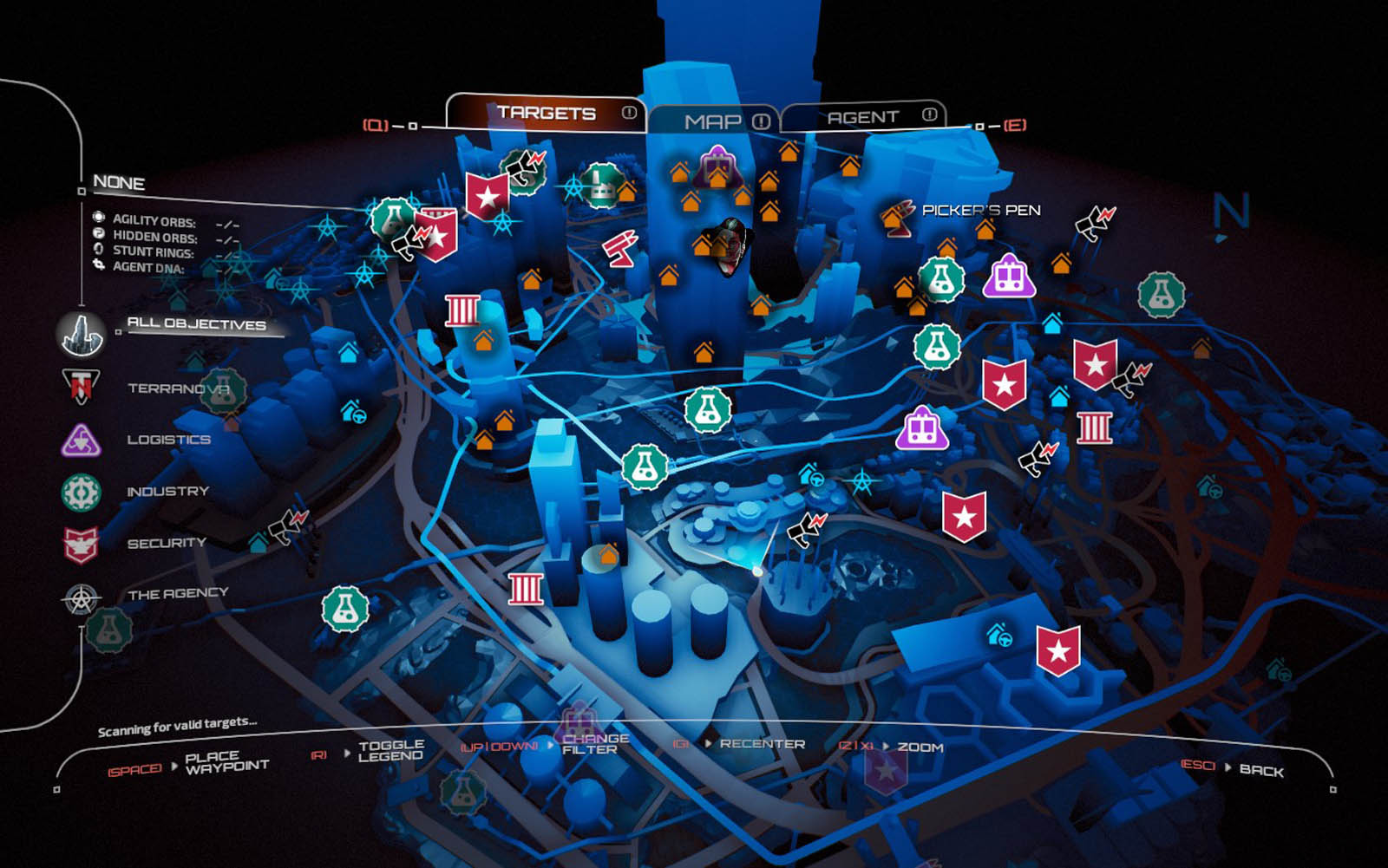 As someone who loved Crackdown 1, I really enjoyed Crackdown 3, it felt familiar, yet refreshed for modern platforms. The biggest complaint that’ll be leveled against the game is it’s too similar to the first Crackdown and that there’s not enough to draw in new fans, in a very crowded open-world gaming market.

Crackdown 3 is available on February 15th, 2019. It’s available on both Xbox One and PC and as a play anywhere title, when you buy it on one, you get it for the other for free.

By far the best way to buy the game is to get it as part of Xbox Game Pass. If you’re already paying the monthly fee to Microsoft, you’ll be able to download it on release day. If you haven’t tried it out, then this is a great excuse to. 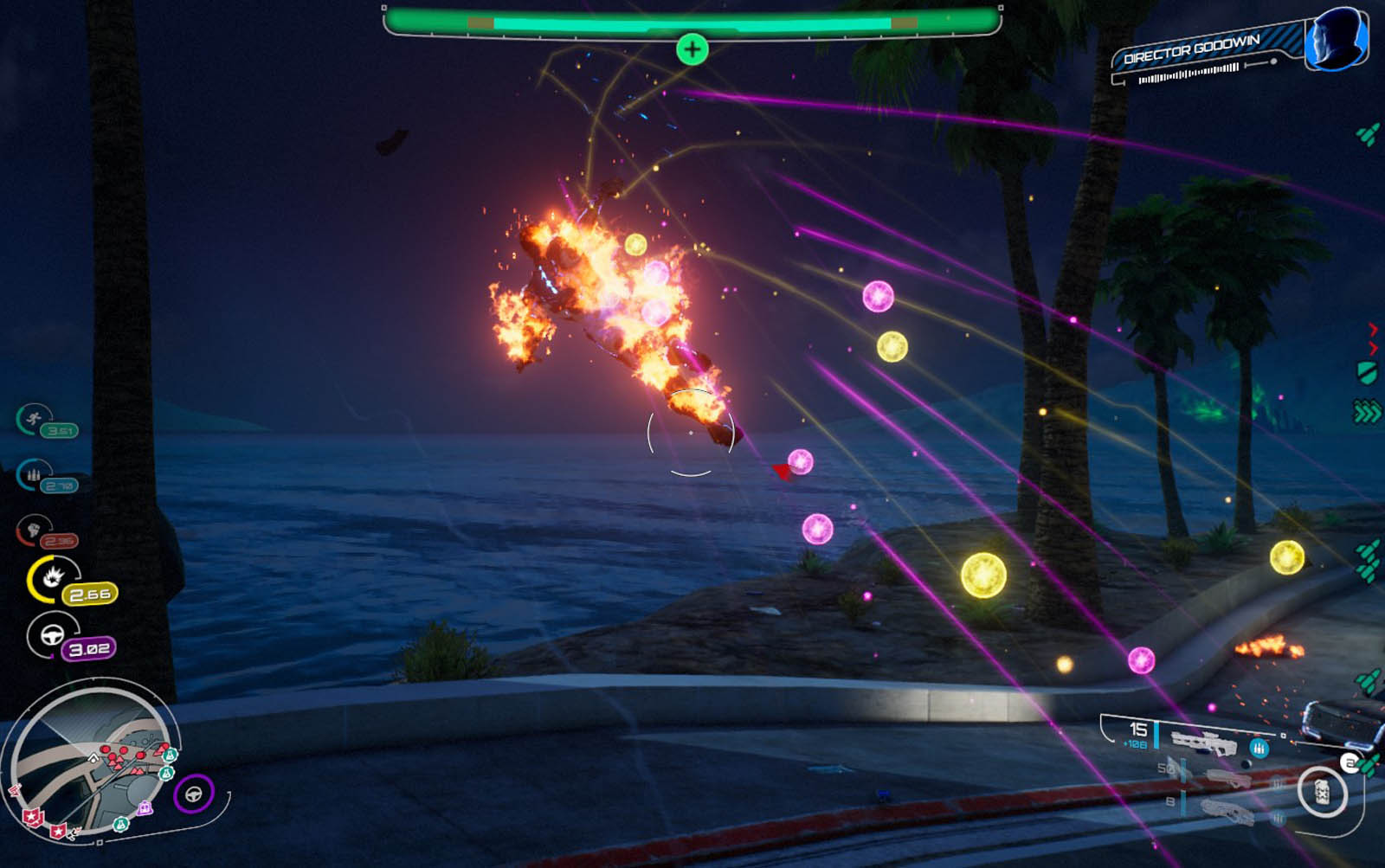 As someone who loved the first, I have to say, I love Crackdown 3 even more. It’s a perfect follow up to the series. I think there’s a lot on offer here for most gamers. Be warned that if you do pick it up, the leveling up system is seriously addictive and you’ll be hunting the whole city for those damn orbs.

The cars in the game are a little on the futuristic side, but I think this could have gone further, perhaps something being held off for DLC. The weapon selection matters when fighting the bad guys, so selecting the right weapon for the right job is also satisfying.

Something I love about the game is how it enables you to attack any battle you choose, rather than a scripted campaign. This is in essence what an open-world explorative adventure should be, but we’ve seen far too many titles pretend to be open, but actually have an arbitrary player path built into them.

If you’re looking for a fun game that to pickup over and over again, then Crackdown 3 is a great option for your disposable cash. If you’re already a Game Pass subscriber, this is an absolute no-brainier.

Jason Cartwrighthttp://techau.com.au/author/jason/
Creator of techAU, Jason has spent the dozen+ years covering technology in Australia and around the world. Bringing a background in multimedia and passion for technology to the job, Cartwright delivers detailed product reviews, event coverage and industry news on a daily basis. Disclaimer: Tesla Shareholder from 20/01/2021
Previous articleD-Link releases Omna wire-free surveillance solution
Next article3 considerations when choosing a VPN