Never having to vacuum again is exactly the lifestyle benefits gadgets, technology and robots are meant to deliver. With iRobot and their Roomba being the market leader, their top...
Posted by techau on August 1, 2015 Never having to vacuum again is exactly the lifestyle benefits gadgets, technology and robots are meant to deliver. With iRobot and their Roomba being the market leader, their top of the line Roomba 880 was worth a look. Interestingly their range of products differ between countries and currently the Australian site only offers the 7th generation products.

With each generation of the technology, these robots get smarter, more efficient at cleaning the same floor space. They are getting quieter, achieving better battery life and most importantly are improving the amount of dirt and dust captured.

To get the latest iRobot had to offer, I actually imported the Roomba 880 from the US. After introducing the Roomba to the home and finding it a place to sleep at night, I configured it’s calendar to run at 9:30am on Mondays (after the weekend) and Friday (after weekdays). This means when my wife and I are off to work, the robot goes to work as well.

Of course we watched the seemingly unscientific, slightly drunk path that Roomba takes to clean an area, but let’s assume that’s efficiency in disguise. It did surprise me given these cleaning algorithms are supposed to be so smart. If you watch a timelapse of the path Roomba takes, it will clean an entire area, but to watch it, just looks really inefficient. 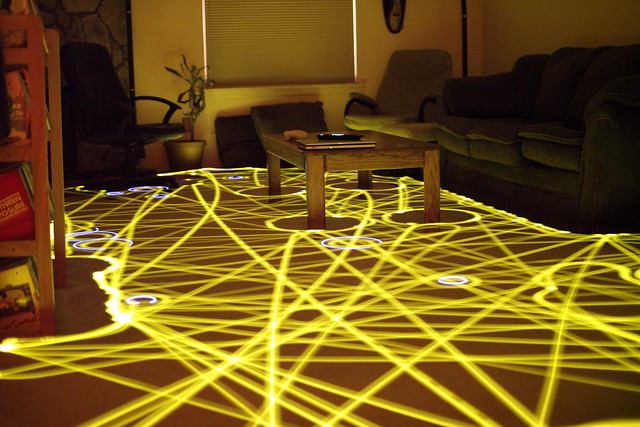 By way of mechanics, Roomba has the capacity to fully rotate in 360 degrees, move forward and backwards to get the job done. You’d think a lawn mowing style of back and forward strips across an area, while avoiding furniture would be the most direct method, but clearly people smarter than I have worked out this is best. Ultimately the path Roomba takes matters not when it works independently, without intervention and physical effort from you.

Now for the reality. Often when my wife or I would returning home after Roomba runs, we’d often find Roomba had not returned to it’s base station to recharge, but was somewhere around the house. At this point a game of ‘find our robot’ commenced. Checking each room of the house and under beds, we often found a closed door to a bathroom or laundry. Behind the closed door was Roomba, that had managed to nudge the door in such a way that it had managed to close the door and lock itself in the room until the battery dies. This happens far more often that I had hoped for a product this advanced. This can only really be solved by having doors chocked open, or closed to keep Roomba out.

The other unwelcome outcome from a Roomba run is a to return home to find it got a little hungry. Apparently Roomba likes to dine on headphone cords. Most cables like power for laptop chargers, or extension cords are fine, Roomba will scoot straight over them, but headphones typically get tangled in the rollers. Over the weeks and months of owning the Roomba 880, it was strange how we started referring to it like a pet or even a bad child. “Bad Roomba” and “Where’s Roomba today?”  where common phrases around home. Occasionally Roomba’s dirt tray was full, but generally it could run a couple of times before needing to be emptied. When your hear “Please empty Roomba” in a female voice, combined with it’s house training, it’s hard not to feel like your robot has a personality.

Overall Roomba is a great addition to the house and this model is certainly better than early models, but the big takeaway is there’s much work to be done. Roomba really needs to have WiFi and be able to push notifications to you when there are issues so you don’t think the house is clean when it’s not, important if you’re entertaining.

There’s a lot of smarts in this device, like the ability to detect steps, the ability to remember where home base is and return (if it can) when complete. It also has wall detection, so Roomba runs in parallel path against a wall, allowing the rotating brush to sweep up dirt into the intake.

I stopped thinking about vacuuming and the only time I do now, is when I have to rescue my Robot. The iRobot Roomba 880 is available from iRobot’s US site.